Securing Funding from VCs: The Changing Rules for Startups 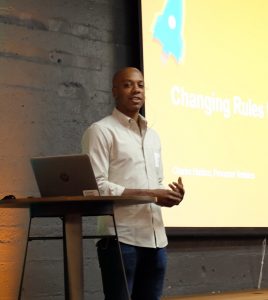 Charles Hudson, of Precursor Ventures, talks about the new “rules” for startups.

Any entrepreneur hoping to raise venture capital funding or build a successful business must launch their company in San Francisco or New York. Employees should work in the same office, to better encourage collaboration. VCs are the best source of capital for entrepreneurs looking to raise money.

Such tenets have long been touted as the best way to build a successful startup. But according to venture capitalist Charles Hudson, a partner at Precursor Ventures, such playbook tactics have gotten stale. As he recently told a roomful of attendees at the AWS Startup Day in San Francisco, technological and financial advancements have finally reached a point where the old rules should no longer be treated as gospel. “Never has there been a better time to break the mold and think differently,” he said.

In particular, Hudson believes three main rules have changed for startups in recent years. First, he disagrees with the notion that startups must be based out of San Francisco or New York. Noting that he has portfolio companies in Tampa, Baltimore, and Toronto, Hudson thinks that video conferencing and chat technology have finally reached the point where they are good enough to actively sustain remote and distributed offices. “Being in a central office is a crutch for companies,” he said.

Additionally, while Hudson concedes there are bigger pools of available talent in known tech hubs, he counters that bigger talent pools also mean higher levels of competition for that talent. More competition also leads to higher employee salaries, especially in notoriously expensive cities like San Francisco. “It’s never been easier to start a company outside the Bay Area,” Hudson says. “The question is how big can you get.”

Secondly, the rules around fundraising have changed. Hudson says that when he first started in venture capital, $1 million was considered a huge seed round, while now $3 million is closer to the norm. There are also hundreds of new firms and funds that have popped up to invest in startups—not to mention new fundraising opportunities in the form of initial coin offerings (ICOs), pre-orders for consumer products and hardware, and fan-supported services like Patreon. The downside to increased funding sources, however, is increased confusion and sunk time spent pitching multiple sources—time that could be spent working on the product. And don’t forget, Hudson adds, “every incremental round means you’re selling more and more of your company.”

The third changing rule for startups involves the amount of time companies should stay private. For years, most investors’ view was that the longer companies stayed private, the more time they would have to get ready for being a public company, and the better off they would be in the future. According to Hudson, it’s not clear this is still the case. Companies like Dropbox, Pinterest, Uber, and more are staying private longer than ever. This has profound implications, especially for employee equity. In a world where companies didn’t stay private long, offering employees a four-year options grant and a three-year vesting schedule made sense. Now, founders have to ask themselves if the four-year option schedule is the best thing for their employees, or if they should be allowed to sell along the way.

In sum, today’s technology entrepreneurs are following a fundraising playbook that’s growing increasingly dated, Hudson said. “We’re at a time when technology is finally unlocking secrets for startups,” he said. His only caveat? If you want to shake up the old ways of doing things, you have to act quickly. “Don’t wait for the dust to settle,” he said. “Most of the benefits go to those who dive into new approaches early, so I would encourage you to run as many cool experiments as you can now.”