Why Donuts Migrated its Domain Registry Business to AWS

John Sage, the VP of IT Operations at Donuts Inc, knew he wanted to migrate the company’s servers and registry platform off of their legacy technology stack. He didn’t know exactly how many engineering hours it would require or how long the process would take, but he did know one thing: They were moving to AWS.

“We’re an innovative registry that’s committed to providing the best platform and technology stack to serve our customers,” Sage says, “and we felt like AWS was by far the best fit.”

Donuts, which owns and operates over 242 generic top-level domain names (gTLDs) like .news, .live, and .games, has been working as an accredited registry for about a decade with the Internet Corporation for Assigned Names and Numbers (ICANN), which has operated the address system for the internet since 1998.

In 2013, ICANN authorized an increase in the number of internet domains. In addition to the traditional top-level domains such as .com and .net, the organization added thousands of new extensions. Donuts Inc, co-founded by industry veterans such as Paul Stahura, snapped up hundreds of the new gTLDs and staked the company. “Essentially what we did is expand the real estate of the internet by leaps and bounds by adding those extensions,” says Sage, who oversees Donuts’ Cloud, Infrastructure, BI and Data Warehouse teams. “There’s so many different options available today for customers and brands who want an online presence.” 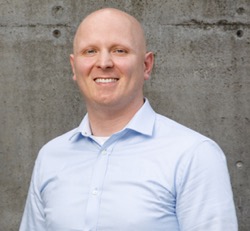 John Sage, VP of IT Operations

The company sells its gTLDs through marketplaces like Name.com, one of many Registrar’s that sells top-level domain names directly to consumers. They make API calls to the Donuts registry platform to ensure that the specific domain is available, and if so, assigns it for the end customer as they complete the purchase. This process could be happening from multiple different marketplaces at a time, so Donuts’ architecture has to be nimble yet straightforward. From Sage’s point of view, Donuts “needed to build on a modern technology stack that’s stable and organized,” and AWS more than fit the bill.

While Donuts does take advantage of many of AWS’s core offerings, the team also has found ancillary services useful as well. “From AWS Systems Manager, to Control Tower and Landing Zone, we’ve been able to build various business units and expand our footprint while maintaining a high degree of segmentation and standardization on the security and operations side,” says Sage.

The migration process brought many important questions to the forefront for Sage and his team. How do I architect the business in the cloud today? How do I maintain the same level of security standards and operational control on the authentication side ? How do I logically separate those? How do I run them efficiently? Per Sage, “We found that Amazon had the most experience and the most maturity. It has hundreds of services that provide us some much-needed flexibility for optimization, as well as agility to deliver new services.”

To help with the migration, Sage and his team had the help of dedicated AWS Solutions Architects along the way. “It was great to have that support and someone to answer our questions,” he says. But Sage’s biggest rave is for the platform itself. “Everything’s automated, which is phenomenal. I can spin up a new account with Landing Zone and CloudFormation, and I’ve got all my networks automated and mapped out logically based on the account and business unit. That has allowed us to basically deploy dozens of accounts programmatically and still maintain a centralized IDP,” he says, “and Amazon was the only one that really provided that level of functionality.”

Donut’s business stands in a commanding position, while not many may know it by name. “There’s only one place to get a domain on our extensions, and that’s to talk to the Donuts registry through our channel partners.” Sage says, “Our platform on AWS holds the definitive source of truth for the internet for those extensions. We’re very excited about the future we’re creating for consumers to build the best online brands and services using the top domain extensions available.” Indeed, Donuts—and the domain industry, for that matter—are a bit like AWS: the backbone of the internet that the layman might not think about but are critical to making everything run.