In an enterprise environment, it is common that both Linux and Windows workloads require access to the same data. For example, electronic design automation (EDA) and media and entertainment workloads often involve Windows users accessing data produced by Linux compute instances. Concurrent access to this data requires multiprotocol access: NFS for Linux workloads and SMB for Windows workloads. Multiprotocol shared storage enables the same dataset to be presented via both Linux and Windows so that each operating system can access the data with its native-file protocol.

With the announcement of Amazon FSx for NetApp ONTAP, AWS provides your Linux, Windows, and macOS workloads with concurrent, multiprotocol access to fully managed shared storage combined with ONTAP’s popular data management capabilities. With FSx for ONTAP, you can consolidate your Linux and Windows workloads into a single service or file system, even if these workloads do not share the same data. This will allow you to reduce overhead and complexity in your environment, save cost by avoiding multiple copies of data, and migrate existing multiprotocol workloads to AWS.

In this blog, we demonstrate how you can set up multiprotocol access to the same FSx for ONTAP volume using both the AWS Management Console and NetApp ONTAP CLI.

There are a few important concepts to introduce when it comes to multi-protocol data access: user identity mapping and security style.

User identity mapping is the process of mapping a Linux user to a Windows user and vice versa. Organizations typically manage user identities with an identity provider such as AD or another Lightweight Directory Access Protocol (LDAP) to manage shared credentials across many systems. Both Linux and Windows convert the user name to an underlying ID: for Linux, this is the user identifier (UID); for Windows this is the security identifier (SID).

Each FSx for ONTAP file system can have one or more storage virtual machines (SVMs). An SVM is a virtual file server that has endpoints for client access. Each SVM can have a separate AD or other authentication configuration. The configuration will determine how the SVM authenticates users and can include unique user mappings between Linux and Windows identifiers. We will show an example of this later in the blog.

Note: Security style can be configured at both the SVM and the volume level. The SVM level setting will set it on the root volume and any volumes under that SVM will inherit the setting unless it has its own explicit setting

Note: If you have resources in separate VPCs, clouds, or on premises, you can use AWS Transit Gateway to connect these resources and enable multiprotocol resource access.

This blog uses the Amazon FSx console and the NetApp ONTAP CLI. To access the ONTAP CLI, you need to SSH into your FSx for ONTAP file system management endpoint (shown later). 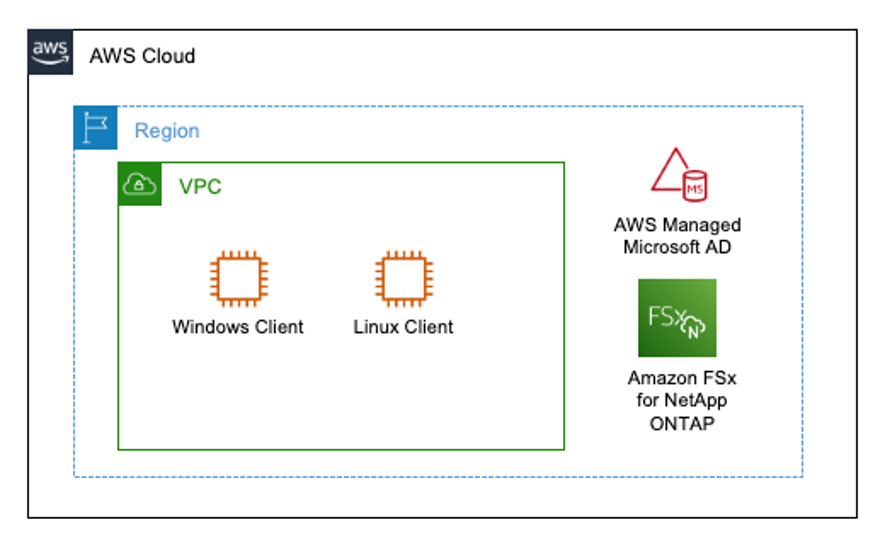 In this blog, we use the NTFS security style, manage file permissions using NTFS ACLs, and map the Linux LDAP user attributes uid, uidNumber, and gidNumber to Windows users in AD. We show how to configure this later in the blog.

Figure 3: Overview of name mapping for your file system

In Active Directory, we add a user (named “Bob”). This user is for testing access from your Linux and Windows clients. Using the Attribute Editor in Active Directory Users and Computers, we set the following attributes for the user:

Note: The uidNumber and gidNumber depends on your environment. These numbers can be any value as long as it does not conflict with other users and is less than the maximum value supported by the operating system version in your environment. 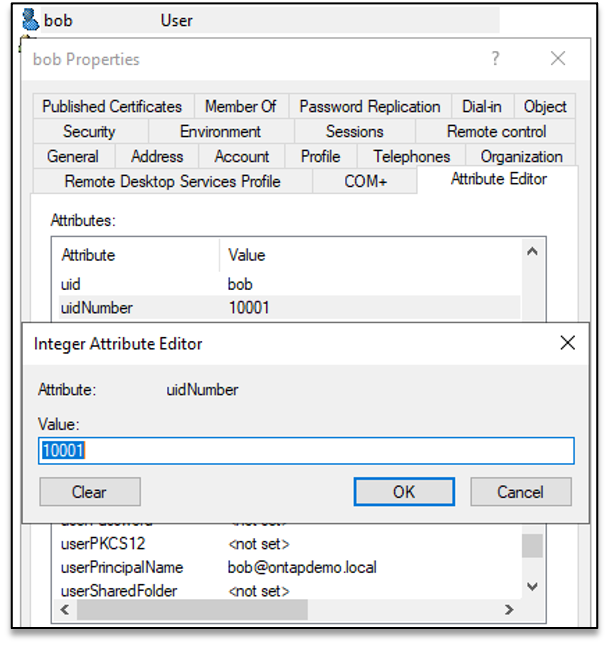 Setting up FSx for ONTAP

Create a file system using Standard create, as the option to join an SVM to Active Directory is only available through standard create.

In Security & encryption, specify a password. You’ll use this to log into your FSx for ONTAP file system later in the blog. 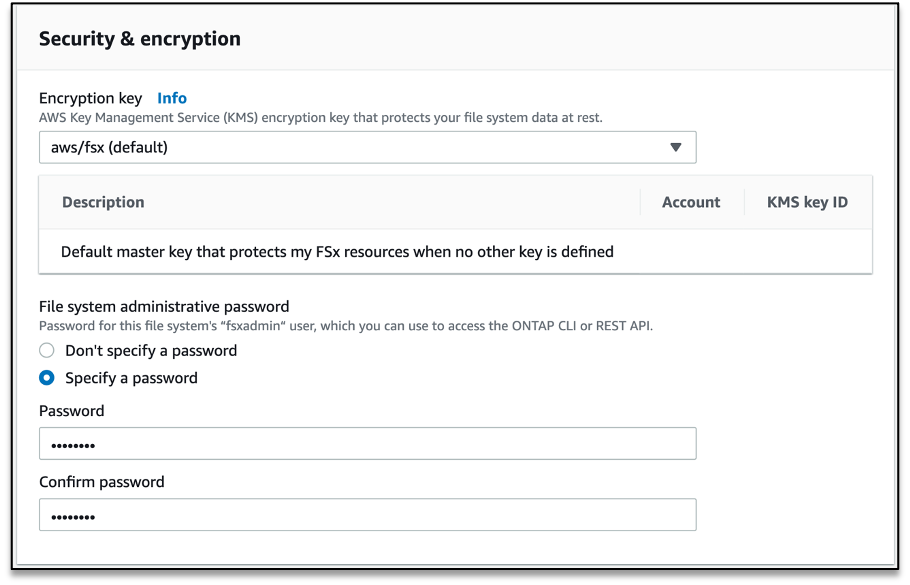 After we specify the basic File system details, we configure a default storage machine configuration. Give it a name, and optionally specify a password (an SVM password is not required for this blog). Then choose Join an Active Directory, which is a critical aspect of this setup. Here, specify the DNS addresses associated to your AD configuration.

In the Active Directory configuration, specify the Organizational Unit (OU) that corresponds to our Domain Controller (DC) and OUs within which to join our file system. For more information on these values, see the AWS documentation. 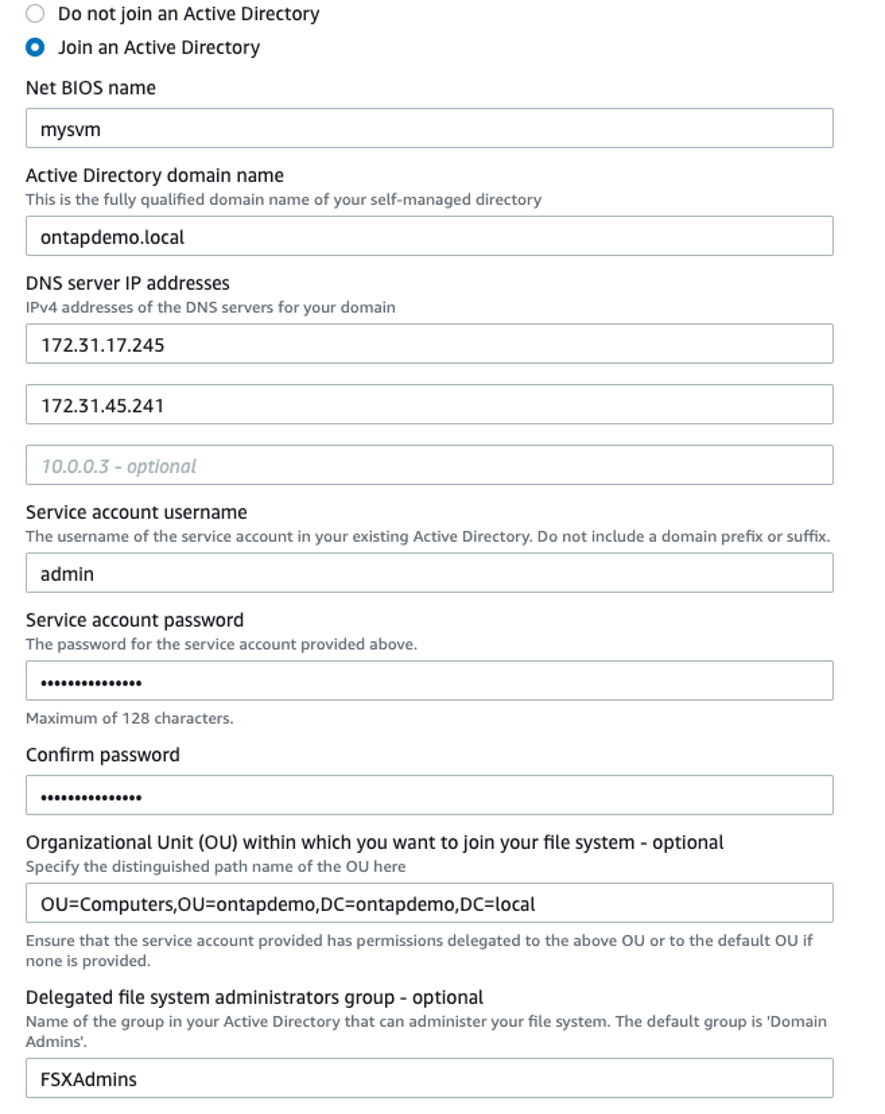 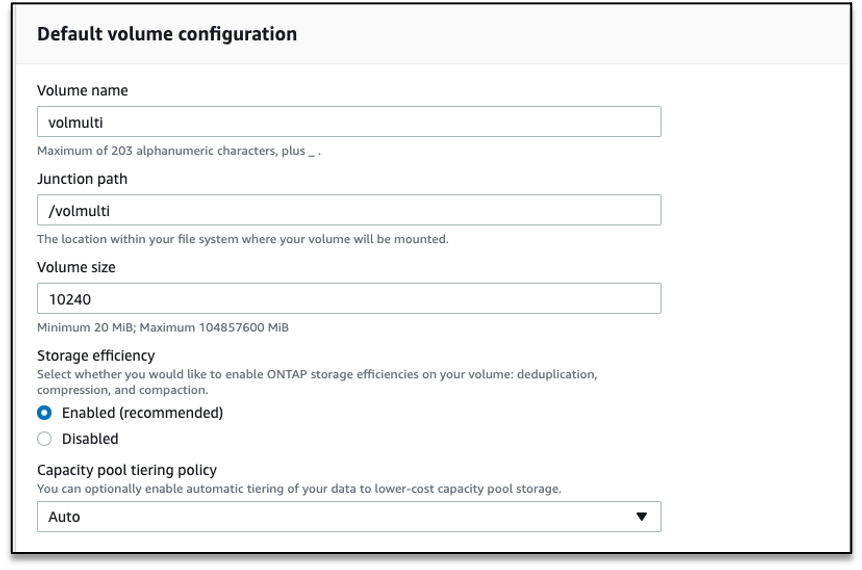 Review all the configuration on the Summary page, then select Create.

The file system can take 30–40 minutes to create. Once it has finished creating, proceed to configuring name mapping using the ONTAP CLI.

We first add an LDAP configuration in order to map Linux UIDs to valid users in Active Directory.

Note: There are multiple ways you can resolve Linux UIDs on ONTAP including LDAP, NIS, and local users. We use the AD properties in this case but you could utilize the method that works best for your environment.

Run the vserver services name-service ldap client create command (documented here) to associate an LDAP client configuration with an SVM. The SVM will use the AD credentials provided at SVM creation to connect to AD for LDAP lookups. The relevant parameters we use are as follows:

More information on these commands can be found in the NetApp documentation.

The next command needs the client-config name set in the previous step to associate with the SVM.

Next, we add LDAP as a name service.

Finally, we set up a CIFS (SMB) share so Windows can access the FSx for ONTAP volume we created. An NFS export is automatically configured by FSx for ONTAP when the volume is created for Linux access. Use the junction path provided when creating your file system in the following command. You can use any name you prefer for share-name.

Your file system now can be accessed by both Windows and Linux systems, and your SVM has a method of mapping Active Directory users to Linux users.

We want to make sure we can allow (and restrict) data access for both Windows and Linux users. We log into the Windows system as the user we created in Active Directory that will be allowed to access files (ontapdemo\bob) and navigate to \\mysvm.ontapdemo.local\volmulti in file explorer.

Then, we create a file called test.txt and save some data in it. 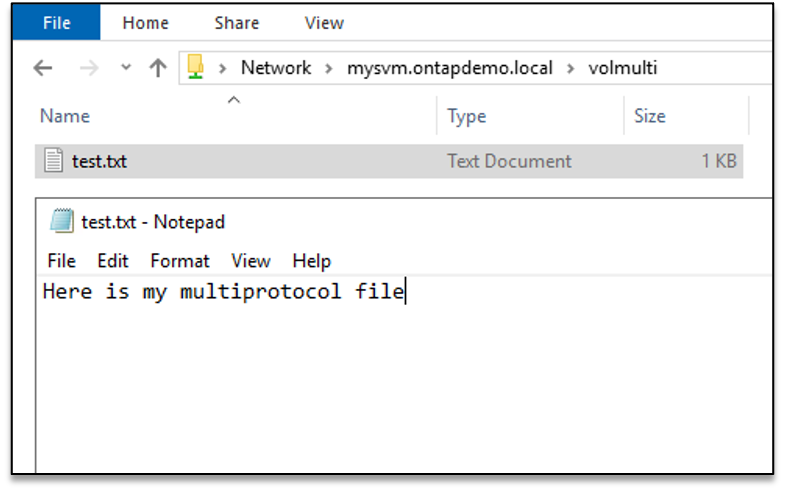 We only want “bob” to be able to access this file so we update the Windows NTFS ACL to give only “bob” full access permissions. 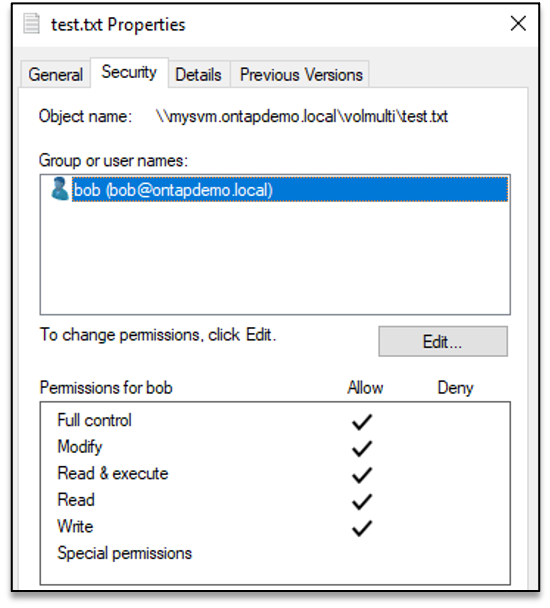 For the Linux instance, we can join the AD domain using the AWS documentation. However, we need to take one additional step and set the ldap_id_mapping = False in the sssd.conf file. This enables us to use the uidNumber we set in the users property instead of the generated one from System Security Services Daemon (SSSD). After joining the domain, we run the following commands to make this change.

We then log in to our Linux system as “bob” and mount the FSx for ONTAP volume to /mnt/volmulti.

We verify that bob has the correct UID.

We then read the contents of the file created from the Windows system, and see that “bob” shows up as the owner of the file.

To verify that we can restrict access for users, we next log in to the Linux system as “Mary” and verify we cannot access the file on Linux based on the NTFS ACL.

Even using root permissions, the file cannot be accessed, because even root is mapped to a valid Windows user based on default ONTAP settings, and ONTAP evaluates the NTFS permission based on the user for additional security.

We verified multiprotocol access with “bob,” and that neither “mary” (nor “root”) was unable to access the file.

In this blog, we walked you through how to enable native multiprotocol workloads with Amazon FSx for NetApp ONTAP. We showed how to use AWS Managed AD service to enable both Linux and Windows Amazon EC2 instances to access the same FSx for ONTAP volume and data, and that permissions propagated between Linux and Windows using Active Directory. There are many other use cases, and the same basic steps would apply if you are using a self-managed Active Directory setup or another directory service. It is also important to consider how you want to manage access so you can pick the correct security style (NTFS, UNIX, or mixed).

This capability will allow you to simplify your environment instead of having to maintain separate storage for NFS and SMB. It avoids the need to have to figure out how to replicate data between solutions or build complicated workflow logic to move or copy specific data. This will also save you cost by avoiding copying data to two different locations in addition to Amazon FSx for ONTAP built in cost optimization features.

Thanks for reading this blog post on enabling native multiprotocol workloads. If you have any comments or questions, don’t hesitate to leave them in the comments section.