Many customers are excited about Amazon EFS because it makes it easy to run a highly scalable, highly available, and highly durable shared file system in the cloud. Within seconds, you can create an NFSv4 compliant file system and mount it to multiple (up to thousands of) Amazon EC2 instances or on-premises servers.

I have the unique privilege to work with customers as they evaluate, design, and implement storage solutions to support different applications and workloads. One theme I see with customers who are new to Amazon EFS is a lack of familiarity with advanced file system techniques. I want to share these best practices with you before you start evaluating and testing Amazon EFS. This post helps you get the most out of Amazon EFS.

The first thing that I like to show customers after they mount a file system is its size—the number of 1K-blocks available. Run df at the command line of the EC2 instance where the EFS file system is mounted. It should return something similar to what you see below.

If you’re like me, you have a hard time converting a nine quadrillion (16-digit) value into something understandable. So, a quick df  -h command makes it easier to comprehend. It appears to your applications as if you have >8 EB of available storage but Amazon EFS is elastic, automatically growing and shrinking as you add and remove data, and you only pay for the storage you are actually using (in this case, zero). No longer do you need to worry about provisioning storage and you only pay for what you use.

Because it’s easy to get up and running with Amazon EFS, you may want to dive in and evaluate how Amazon EFS performs as quickly as possible. A common test I see some customers use to evaluate Amazon EFS performance is a “touch” test to generate lots of zero-byte files. I’ve seen this written in Perl, Python, Java, and other languages.

For this post, use a bash script to see how fast you can generate 1024 files. Run the following command on your EC2 instance, making sure that you change the path to your mounted Amazon EFS file system.

If you’re still thinking that this is a long time to generate 1024 zero-byte files, you can compare it to another storage platform. Change the command and run it against the Amazon EBS volume mounted to the instance. Run the following command, making sure that you change the path to use an Amazon EBS volume. In this example, I write to the ec2-user home directory.

How long did it take? In my test, it took 5.112 seconds to generate 1024 zero-byte files on EBS. This is the root volume, which is a 10-GB gp2 EBS volume. In this example, the operation writing to EBS is 3.28x faster when compared to EFS.

In cases like this, I like to play with different what if scenarios. What if you re-wrote the command to use multiple threads? This would allow you to generate files in parallel. Enter GNU Parallel, which is an open-source shell tool for executing serial operations in parallel. It was added to the Amazon Linux repository so a sudo yum install parallel -y command installs it on Amazon Linux 2, after installing and enabling the EPEL rpm package. For more information, see GNU Parallel.

What if you re-wrote the multi-threaded command to write to multiple directories? Each thread writes to a separate directory. This spreads the write operations across multiple inodes.

For those unfamiliar with inodes, an inode is a Unix-style data structure that describes file system objects, like files and directories. Inode contention occurs when multiple threads are attempting to update the same inode, which can be more evident in network file systems due to network latencies. Run the following command to generate 1024 zero-byte files using 32 threads, each thread generating 32 files in its own directory. Thirty-two files in 32 directories totaling 1024 files.

By re-writing the command to use 32 jobs (or 32 threads), and having each thread generate files in its own directory, you can generate 1024 zero-byte files in only 0.776 seconds. This is 21x faster than the first single-threaded, single-directory test.

Now, what if the same file system is mounted to 2, 10, 100, or 1000 Amazon EC2 instances? How many files can be generated on a file system that supports open-after-close consistency, data durability across multiple storage servers and multiple Availability Zones, and high availability engineered with no single points of failure?

This is just one test you can do to effectively evaluate and test drive Amazon EFS. To learn more about its performance characteristics, I encourage you to walk through the Amazon EFS Tutorial on GitHub. The tutorial goes beyond the test drive I just did and shows more examples of the benefits of parallelism. It also demonstrates how I/O size, EC2 instance type, and different file transfer tools have a significant impact on performance. These techniques are also used by AWS DataSync to improve data transfer performance to and from EFS file systems. 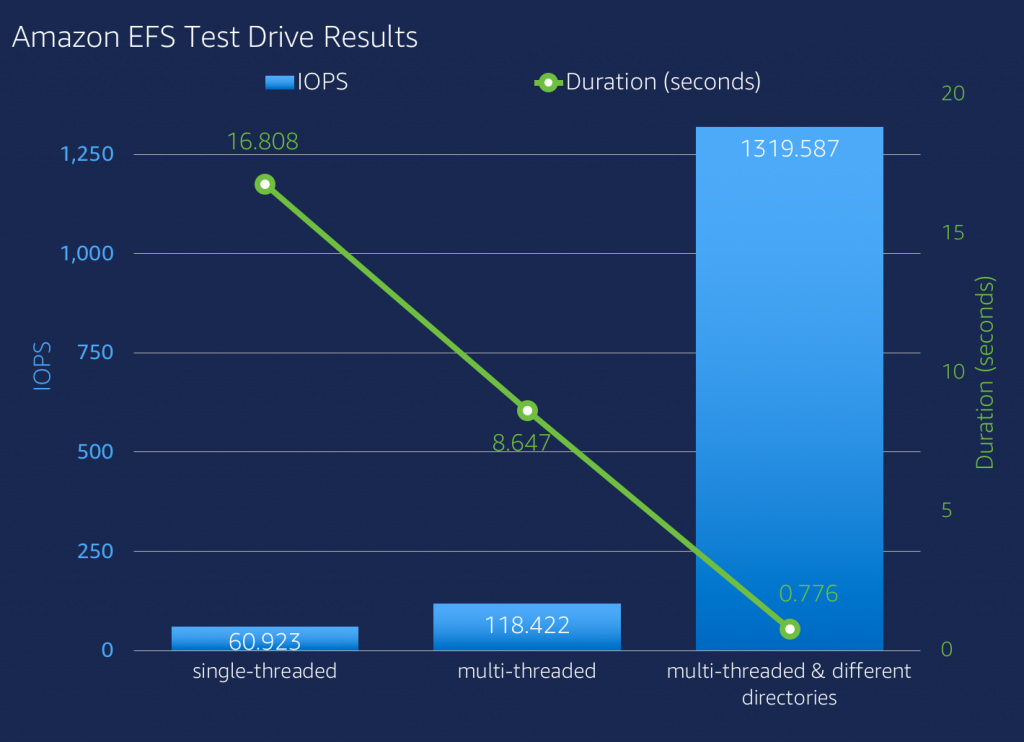 In this post, I demonstrated just two recommendations. You can use them to better take advantage of the distributed data storage design of Amazon EFS and achieve massively parallel access to file system data.

The first was to access EFS in parallel using multiple threads. The second was to access multiple directories or inodes in parallel using multiple threads. Other recommendations to help you better understand and leverage the distributed design of EFS are included in the Amazon EFS Tutorial. I look forward to providing more posts on Amazon EFS, FSx for Windows File Server, and FSx for Lustre.