Amazon FSx for Lustre is a fully managed service that provides cost-effective, high-performance, scalable storage for compute workloads. It is powered by Lustre, the world’s most popular high-performance file system, and delivers sub-millisecond latencies, up to hundreds of gigabytes per second of throughput and millions of IOPS. It is designed to serve many types of workloads, including machine learning, high performance computing (HPC), video rendering, and financial simulations; in essence, any Linux-based, compute-heavy workload that needs high-performance shared storage.

As of May 2021, you can enable data compression on your Amazon FSx for Lustre file systems to reduce the storage consumption of both your file system storage and your file system backups. This feature is designed to deliver high levels of compression, and based on my testing I’ve found that it does this while delivering higher levels of throughput for read and write operations. This is achieved by automatically compressing the data before writing to disk and automatically uncompressing data after reading from disk. Due to this design, we’re able to read and write more data to disk in the same amount of time, thus increasing throughput and IOPS.

In this blog post, I walk you through the new Amazon FSx for Lustre data compression feature, share the results of a storage consumption and throughput test comparing compressed and uncompressed file systems, and list compression ratios for some common data types.

Each Amazon FSx for Lustre file system consists of Lustre file servers that Lustre clients communicate with, and disk storage attached to each file server. Each file server employs a high-performance network, fast in-memory cache storage, and either HDD-based or SSD-based disk storage. With the new optional data compression feature, Amazon FSx for Lustre file servers are now capable of compression using the community-trusted and performance-oriented LZ4 algorithm, designed to deliver high levels of compression without impacting performance. Compression sits between the in-memory cache storage and disk storage. Data is compressed before writing to disk and uncompressed after reading from disk. These components are illustrated in the following diagram (Figure 1). 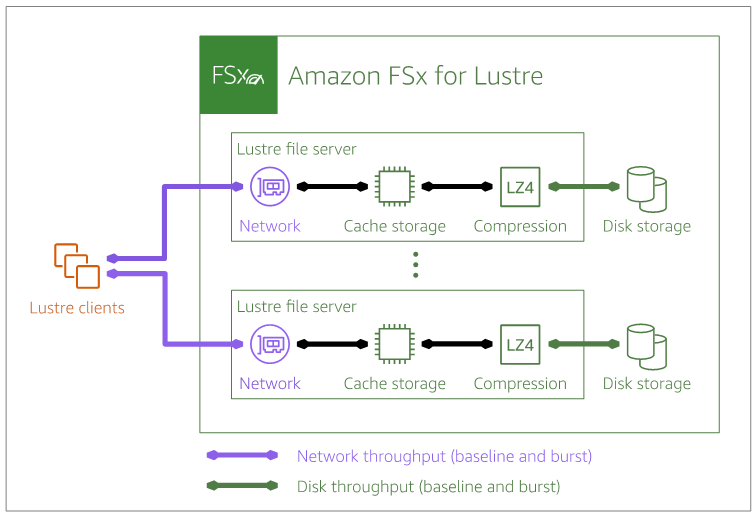 First, I create two Amazon FSx for Lustre file systems. One with compression enabled, named LZ4, and one without compression enabled, named NONE. Each file system is configured with persistent SSD storage with a throughput per unit of storage of 200 MB/s per TiB (up to 1.3 GB/s per TiB burst) and a storage capacity of 14.4 TiB. Based on the storage capacity and throughput per unit of storage, each file system is capable of achieving 2880 MB/s of baseline throughput and 18,720 MB/s of burst throughput.

Second, I launch eight c5n.9xlarge Amazon EC2 instances using the latest Amazon Linux 2 Amazon Machine Image (AMI). I purposely selected this instance type because of its non-variable network performance so I could ensure that EC2 performance isn’t a limiting factor of my test. I need consistent network performance from Amazon EC2 to the file system.

The user data script for all Amazon EC2 instances installs the latest versions of Open Message Passing Interface (OpenMPI) and IOR, along with AWS CLI v2 and two monitoring tools, nload and ncdu. The following script is an example of the user data script being used to launch these instances.

Third, I make the directory /fsx on all instances and mount the file system with no data compression (NONE) on the first four instances, and mount the file system with data compression (LZ4) on the last four instances. This allows me to run the tests in parallel, with the first four instances mounting and writing to the NONE file system while the last four instances mounting and writing to the LZ4 file system. The IOR write operation will use multiple threads to generate and write to 12-GB files, so I configure Lustre to stripe each file across all Object Storage Targets (OSTs). This optimizes file system access for my test, as each Amazon EC2 instance can access and write to all OSTs in parallel and the data will be evenly distributed across all OSTs. The following script is an example of the script being used to complete this step.

The data compression results are impressive, both in terms of storage savings (compression ratio) in addition to aggregate throughput. Each 12 GB of data written to the uncompressed file system (NONE) consumes 12 GB of storage. I find this out by running the following command on an instance that has the uncompressed file system (NONE) mounted. The command du -sh <file> returns the amount of disk usage (compressed) in a readable format while du --apparent-size -sh <file> returns the apparent disk usage (uncompressed) in a readable format.

This returns the disk usage and apparent disk usage of the file created and written to by thread 0.

Because data compression is not enabled on this file system, it makes sense that the disk usage and apparent disk usage for all these files is the same, 12 GB each.

Now I run the same command from an instance that has the file system with data compression enabled (LZ4).

The apparent disk usage (uncompressed size) for this file is the same – 12 GB, but the actual disk usage (compressed size) is only 3.2 GB. That’s a space savings of 73.33% or a data compression ratio of 3.75:1. The entire test dataset of 576 files with 12 GB of data written to each file has a total apparent disk usage of 6912 GB. However, with data compression enabled, it only consumes 1843.2 GB of disk space. This is a huge cost savings feature, as it allows you to create a file system with less storage capacity.

The following table (Table 1) shares the different performance characteristics of the test file systems and extrapolates out the potential disk throughput increase based on the data compression ratio of the IOR test files.

The following figure (Figure 2) visually compares the total aggregate throughput of the NONE and LZ4 file systems during the test.

Disk latencies captured during the IOR write operations also show no measurable difference between the NONE and LZ4 file systems.

Thanks for reading this blog post and please leave any questions or comments in the comments section!