Enterprises set up their AWS environment preconfigured in-line with organizational security policies, compliance, and detective and preventive controls codified right from the beginning. Furthermore, enterprises want to access cloud-native services in a manner similar to how they have been consuming services in the past, from within their own secured networking environment according to their security policies. When consuming cloud-native services via their public endpoint, the request/response traffic (although encrypted) is still exposed to the public internet. This may not be acceptable to security-conscious enterprises.

In this blog, I demonstrate how enterprises can uplift their security posture when using AWS Backup, helping them comply with their regulatory requirements. AWS Backup now supports AWS PrivateLink, allowing enterprises to access AWS Backup from their Amazon Virtual Private Cloud (VPC) by using a VPC endpoint placed within their private network space. In short, it eliminates the need to use the public internet for service access. In addition, extra controls can be added via security group and VPC endpoint policy when accessing the service through the VPC endpoint.

Orchestration and operations on the various AWS services, using methods such as AWS CLI and/or service API/SDK, are done via the underlying service’s endpoint. A service’s endpoint is the URL that provides the entry point to that service. These service endpoints are public and accessible over the public internet (HTTPS). For example, the Sydney Region’s endpoint for the AWS Backup service is backup.ap-southeast-2.amazonaws.com. 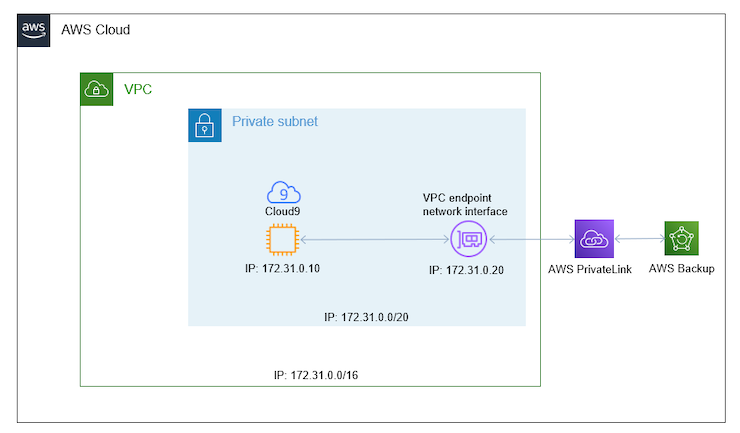 A complete list of the AWS Backup endpoints in the various AWS Regions is available in the Reference guide. The APIs that can be invoked via this endpoint are listed at the AWS Backup Developer Guide.

The easiest way to experiment and set up the AWS Backup PrivateLink feature is to use:

The AWS Backup commands in AWS CLI use the AWS Backup’s public service endpoint URL (backup.ap-southeast-2.amazonaws.com), which can be inspected for a given Region in an AWS Cloud9 IDE terminal as shown in Figure 2.

An enterprise can organize its AWS environments in multiple ways with various segmentation approaches used to contain the blast radius—the maximum impact that might be sustained in the event of a system failure. A typical approach is a multi-account strategy for the workload teams and centralized accounts for core services (networking, security, logging, and so on). Furthermore, each workload team can be assigned their own VPCs or have an optimized shared-VPC design. Therefore, the AWS Backup Privatelink can be deployed into each of the workload VPCs or into a shared-services VPC. For the sake of simplicity, we will deploy the VCPE into the default VPC (CIDR – 172.31.0.0/16) that is automatically created for a new account. 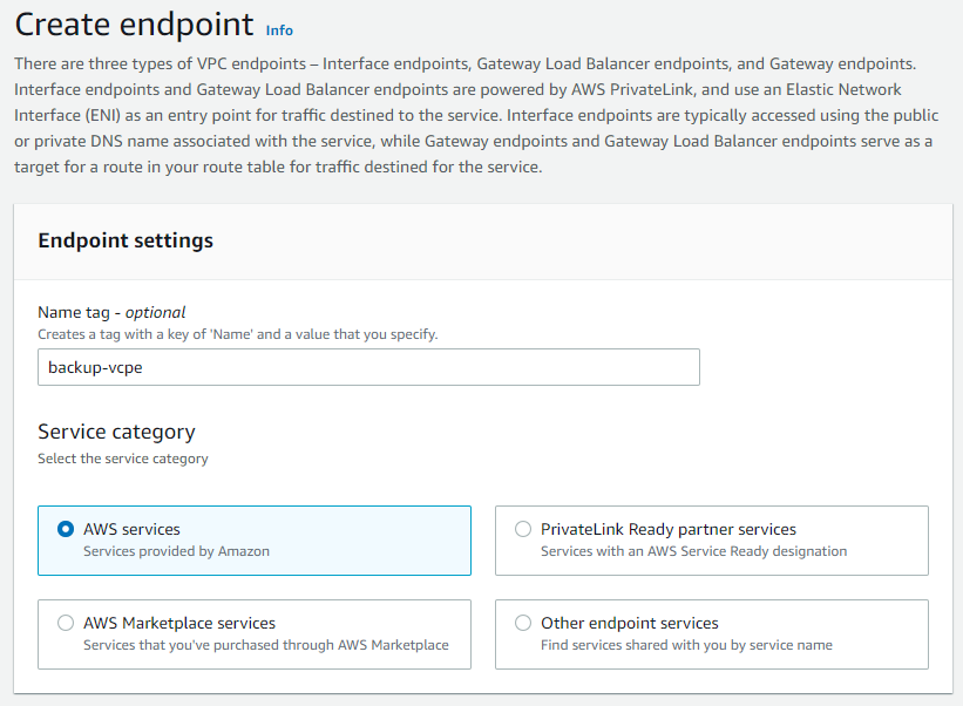 Then, in the Filter services search bar, search and select the backup service for your Region (example: com.amazonaws.ap-southeast-2.backup). All the AWS services that currently support the PrivateLink feature are listed at the AWS PrivateLink Documentation.

For the VPC dropdown, select the VPC where we want to deploy the endpoint (for example, the default VPC). Also, the selection Enable DNS name under Additional settings is checked by default. This allows for applications, clients and SDKs using the public endpoint DNS name (backup.ap-southeast-2.amazonaws.com) to continue to use the same DNS name but have it now mapped to the local/private address in the selected VPC. This helps with portability as any scripts, code, or SDKs continue to operate using the same DNS name without having to recode, rewrite, and recompile.

Further tightening of the security posture is done by the security groups that get attached to the network interfaces created for the VCPE. Ensure that your AWS Cloud9 instance is also part of the same chosen security group so that it can access the AWS Backup endpoint, as we will experiment with the PrivateLink once it is up. More granular controls can be codified using the endpoint policy which can be associated with the VCPE. This allows for very fine-grain control of the access to the AWS Backup service in accordance to the principle of least privilege. For now we leave the policy set to Full access. 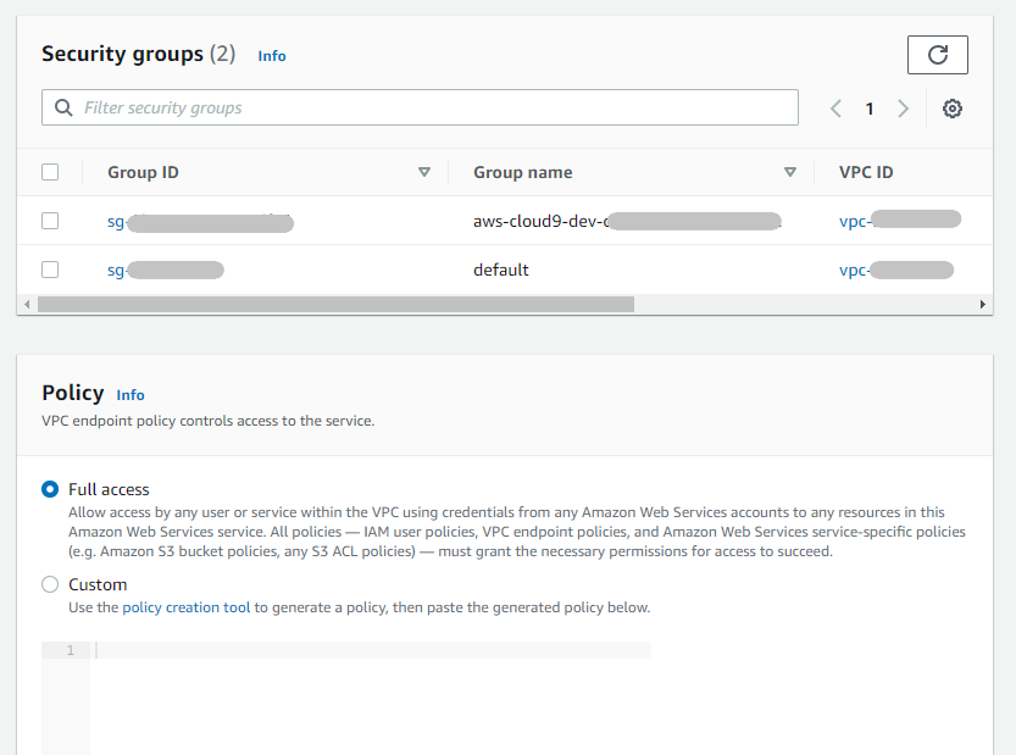 With the above settings, go ahead and select Create endpoint. Once the endpoint is created and the status is Available, it will be listed in the VPC service console under the Endpoints section. Here the details of the endpoint can be inspected along with the private DNS names and also the Zonal and Regional DNS records that have been created and associated with the endpoint. 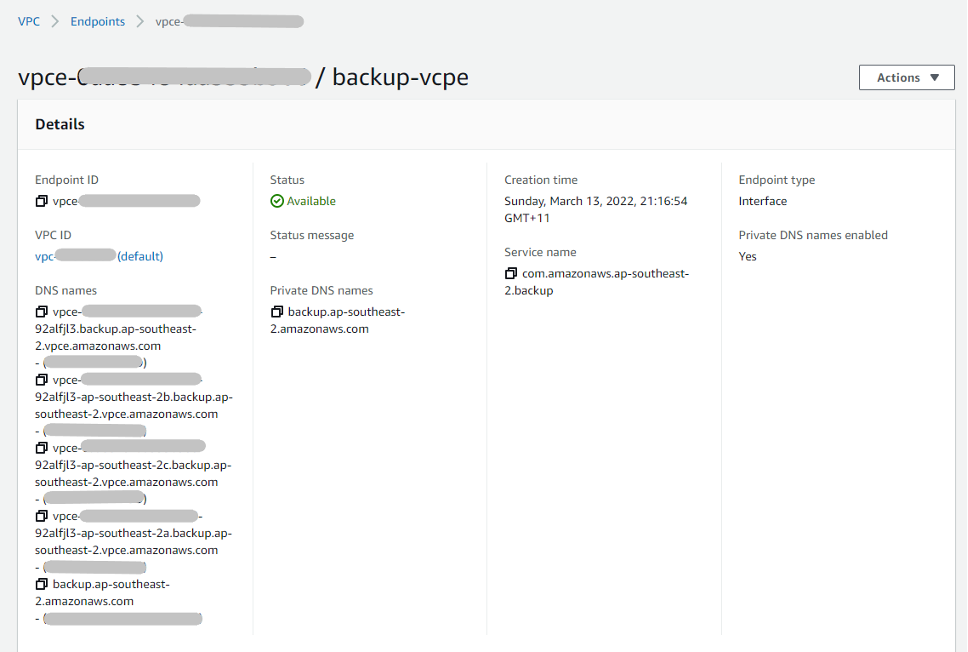 The details of the network interfaces that have been created for the VCPE and placed in the chosen subnets across the three Availability Zones can be viewed in the Subnets tab.

Now back in the AWS Cloud9 IDE, we can validate that the private DNS has been activated and that the formal DNS name is now pointing to the private IP addresses of the corresponding network interfaces:

With the service endpoint available in the private IP address space, we can start interfacing with the AWS Backup APIs. A convenient way to experiment with the APIs is to use the AWS CLI for AWS Backup and invoke the service through that.

First, we list the currently available backup plans. Create a few through the console and you will be able to list it with the AWS CLI list-backup-plans command:

We can confirm that the AWS CLI is using the private DNS by switching on debug mode when running the AWS CLI command (using the –debug flag) where a dump of the actual GET call is available.

Next, we will start a new backup job for an EBS volume (let’s use the volume associated with our AWS Cloud9 EC2 instance) and have it placed in the default vault. Using the list-backup-vaults command, we get a list of available vaults:

Then we use the start-backup-job to kick-start the job providing the details of the vault, resource (EBS volume in this case), and the IAM role to use. These details can be easily gathered from the AWS Management Console. Once we kick off the job a BackupJobId is returned that can be used to track the state of the job.

Finally, we use the describe-backup-job command to track the progress of the backup job:

In order to avoid incurring future costs, please make sure to delete any resources created in this walkthrough that are no longer needed. This includes:

In summary, security-conscious enterprises can uplift their security posture when consuming AWS Backup with the AWS PrivateLink feature.

Secondly, the use of AWS PrivateLink can uplift the security posture by creating a private service access point (VCPE) and then securing it with a centralized policy composed using explicit security-group and endpoint-policy. For example, the backup report aggregation solution can get a security posture uplift by the use of the PrivateLink feature.

Finally, it allows enterprises to take AWS Backup processes and weave them into their CI/CD pipelines for infrastructure and applications, in a manner that is secure and has immense scope for automation.

Learn more about this new feature on the AWS Backup documentation page. Let us know how you plan to use AWS Backup and AWS PrivateLink in the comments section.