Today, we launched a new platform version (1.4) for AWS Fargate, which bundles a number of new features and capabilities for our customers. You can read more about these features in this blog post. One of the changes we are introducing in platform version 1.4 is replacing Docker Engine with Containerd as Fargate’s container execution engine.  In this blog post, we will go into the details of what this means for your container workloads, motivations behind this change and how this rearchitected container execution environment (also referred to as the Fargate data plane) looks under the hood.

Let’s review some of the terms and concepts we’re going to use in the rest of the blog.

What does the switch to Containerd mean for your containers running on Fargate?

In short, there’s no impact to your workloads because of this switch.

Even though Fargate has switched to using Containerd for managing containers, your applications themselves will see no differences in how they are executed. Containerd helps improve the Fargate data plane architecture by simplifying it and making it more flexible (more details in the section below). Your applications themselves will be agnostic to this change. This is because of three main reasons:

Let’s take a quick look at components of the Fargate data plane. Figure 1 shows how they stacked up prior to platform version 1.4. You can watch this talk from re:Invent 2019 for more details. 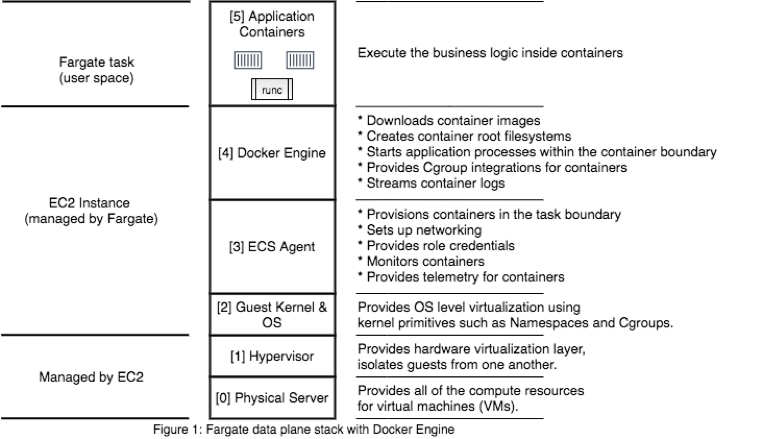 Containerd integration will increase the flexibility of this stack to offer you new features with lower overhead by simplifying it, increasing reliability and by minimizing the footprint of Fargate-owned components. Let’s explore these aspects in more detail next.

Need for a minimal container runtime

As we’ve expanded the feature set offered by Fargate, we’ve continued to customize different components of this stack. For example:

This has been a general trend for many of the features that we’ve built; most needed changes in layers #3 and #2 in the diagram above. We only require a minimal container runtime engine in Fargate, where we only need the basic container CRUD APIs from the container runtime. Everything else is already handled by other components of the Fargate data plane stack.

Containerd fits nicely to this model as it maintains very minimal state and supports exactly what’s needed by Fargate; nothing more, nothing less. For example, Containerd supports using network namespaces created externally when starting containers. This means that Fargate no longer needs to run the pause container for ECS tasks on the platform version 1.4. The pause container was necessitated by the fact that this was the only way in which we could create network namespaces with Docker and ensure that networking was properly configured prior to starting application containers. Since it’s no longer required, Fargate data plane has one less container to manage and one less container image to maintain.

Containerd also has a minimal footprint both in terms of resources consumed when it’s running and in terms of additional packages that need to be installed. For example, with platform version 1.4, we don’t need to install any client-facing CLI for managing containers or container images on any of the VMs as Fargate never had any use for such a CLI in the first place (Fargate integrates programmatically with respective SDKs to manage containers). Similarly, Fargate can get rid of the components that are required to build container images since there’s no need for them either. Since Fargate takes care of curating the execution environment on behalf of customers, it’s always beneficial to minimize the software footprint. Fewer packages installed result in fewer packages to maintain and patch, which results in a more robust platform and a better operational posture.

While Containerd serves as a minimal container execution engine and simplifies the Fargate data plane, it also offers extensibility via its plugin based architecture. Containerd lets clients configure pretty much any part of the container execution lifecycle via plugins. This is highly desirable for Fargate, as it enables Fargate to extend the feature set in meaningful ways that deliver value for containers running on Fargate.

For example, we wanted to add support for streaming container logs to various destinations already supported in Fargate. It was pretty straight forward for us to do this by extending Containerd’s shim logging plugins. We created a set of shim logger plugins for routing container logs, which we are open sourcing today. You can find these on GitHub in the amazon-ecs-shim-loggers-for-containerd repo. These replace Docker Engine’s in-process logging drivers, which Fargate uses prior to platform version 1.4 and provide the same set of features. If you’re experimenting with or using Containerd and are looking for an extensible logging solution, you can start using these in your Containerd implementations. More details about using these plugins can be found here.

As another example, Fargate can leverage a VM-based runtime for containers such as Firecracker VMM by simply switching Containerd’s runtime plugin to firecracker-containerd instead of runC. This plugin enables Containerd to manage containers as Firecracker microVMs. The flexibility of switching container runtimes with minimal configuration change is highly desirable for satisfying different kinds of use-cases currently supported by Fargate.

Once we made the decision to adopt Containerd, a natural progression from that was to create Fargate data plane specific components instead of using the ECS agent to orchestrate containers on Fargate instances. We wrote a new Fargate agent for this purpose, which is responsible for interacting with Containerd for orchestrating containers on a VM and replaces the ECS agent. Not only does this new Fargate agent integrate with Containerd, it is also optimized for Fargate. This has already enabled Fargate to deliver features such as supporting EKS pods on Fargate in a seamless manner. This new architecture also allows Fargate to utilize Firecracker microVMs to run containers via the firecracker-containerd runtime. Figure 2 illustrates the new architecture of Fargate data plane stack. 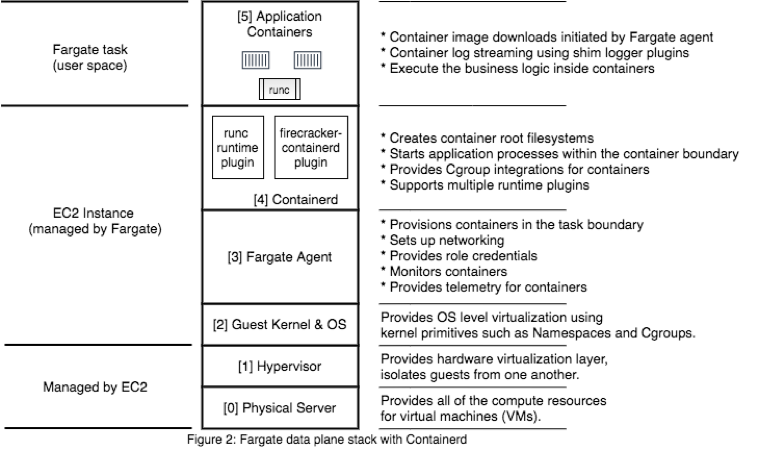 Figure 3 shows a rough sequence of events that lead to Fargate agent running customer containers on a VM when starting an ECS task.

Figure 4 illustrates a high-level view of how these components are laid out: 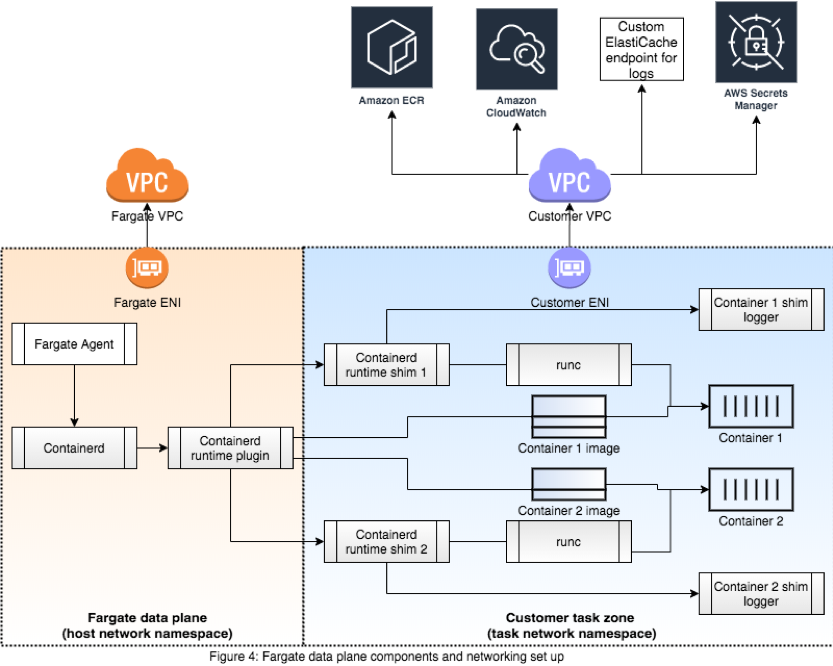 We are excited with the robustness, simplicity, and flexibility this new architecture brings as we are always looking to continuously innovate the Fargate platform and add capabilities that unlock new use-cases for our customers. We would love to hear your feedback on these changes and the shim loggers repo in the comments section. You can also reach out to us on the containers roadmap repo on GitHub.