You can now use the latest version of any of the AWS Lambda runtimes on Amazon Linux 2 (AL2). End-of-life of standard support for Amazon Linux (AL1 for simplicity in this post) is coming in December 2020. As a result, AWS is providing a path for customers to migrate current and future workloads to AL2-supported runtimes.

The choice to run a Lambda function on AL1 or AL2 is based upon the runtime. With the addition of the java8.al2 and provided.al2 runtimes, it is now possible to run Java 8 (Corretto), Go, and custom runtimes on AL2. It also means that the latest version of all supported runtimes can now run on AL2.

The following shows how the runtimes are mapped to Amazon Linux versions:

Developers can now take advantage of these improvements as they develop Lambda functions by using the new Java 8 (Corretto) runtime of java8.al2. You can see the new Java runtimes supported in the Lambda console: 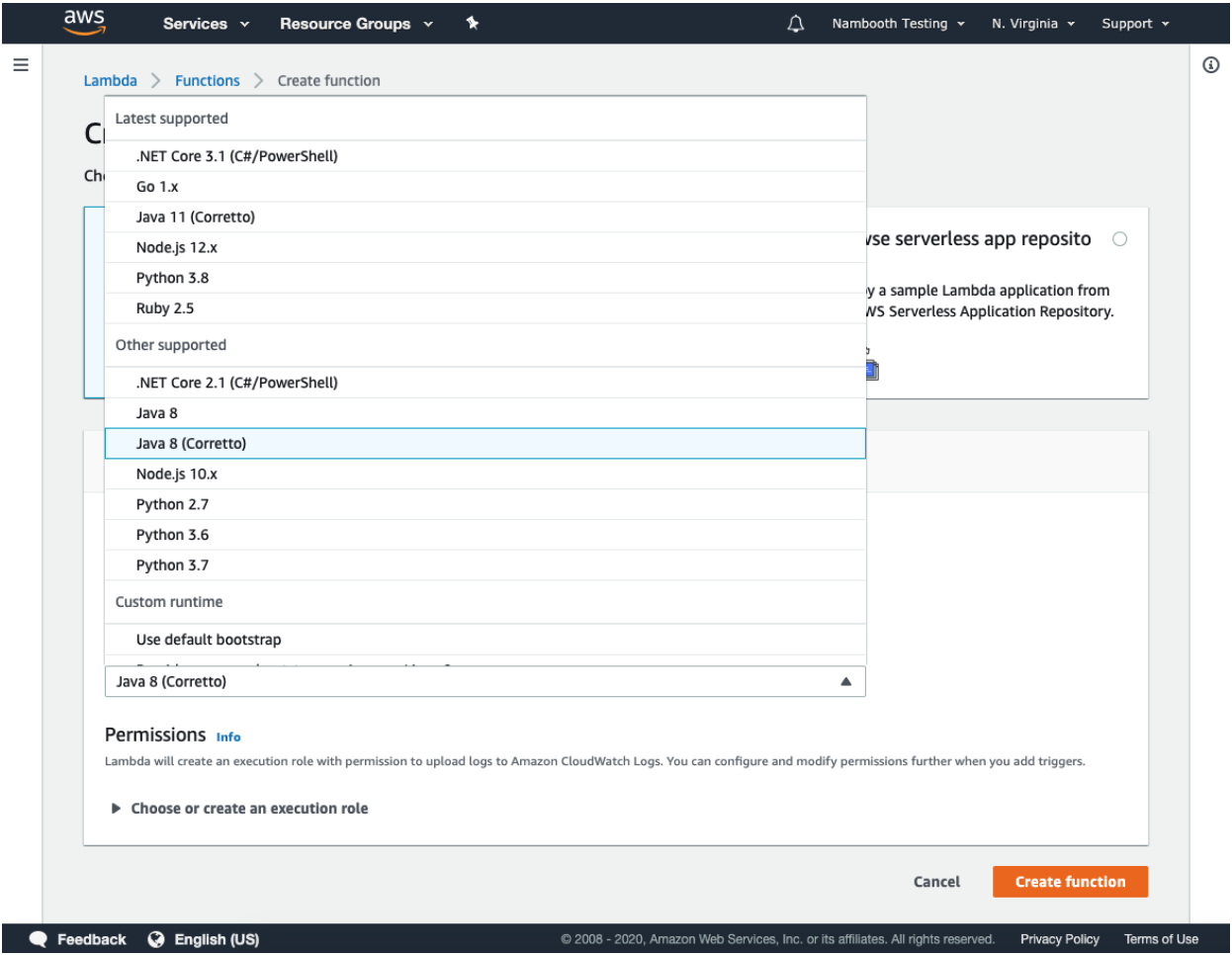 Or, in an AWS Serverless Application Model (AWS SAM) template: 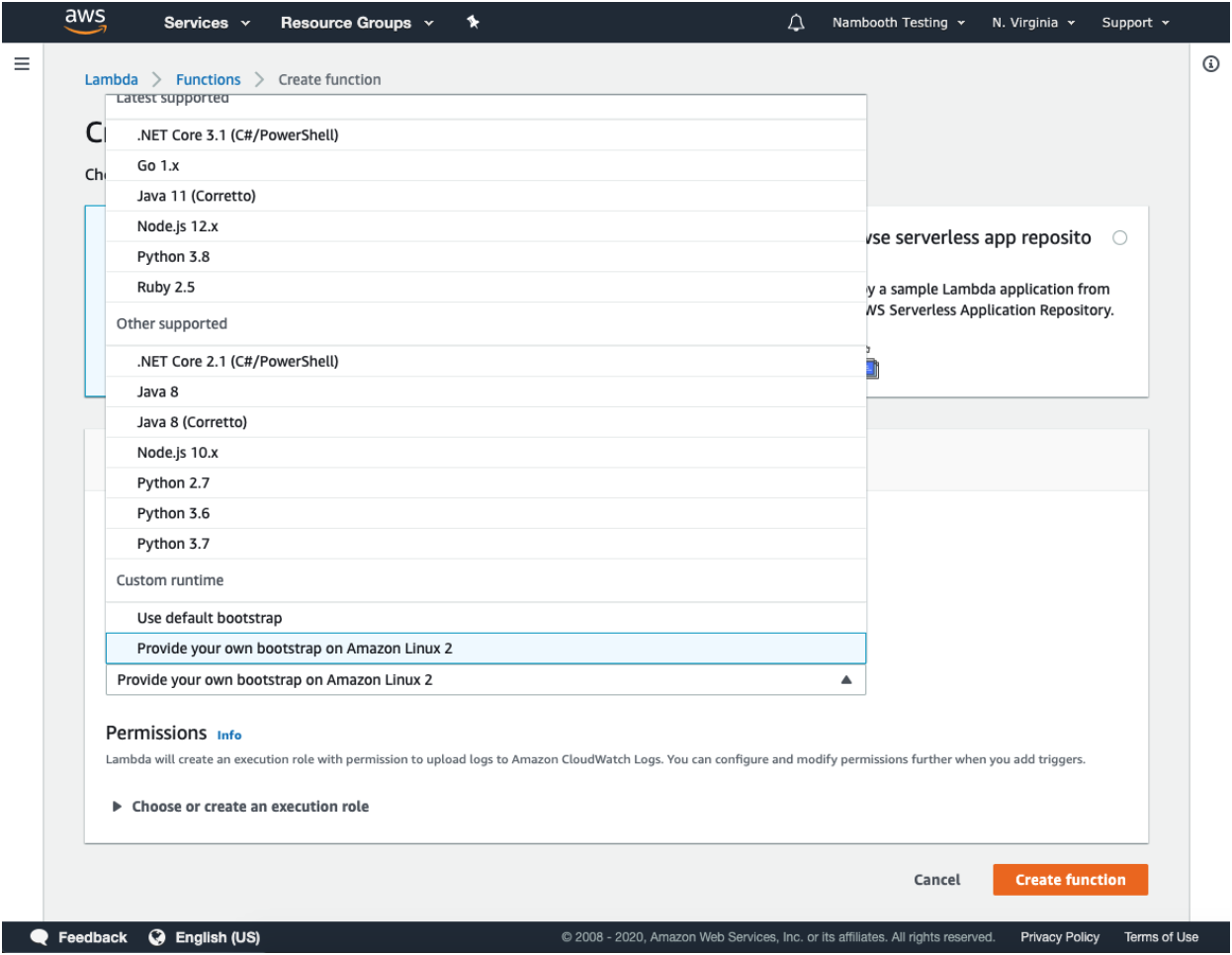 Or, in an AWS SAM template:

With the addition of the provided.al2 runtime option, Go developers can now run Lambda functions in AL2. As one of the later supported runtimes for Lambda, Go is implemented differently than other native runtimes. Under the hood, Go is treated as a custom runtime and runs accordingly. A Go developer can take advantage of this by choosing the provided.al2 runtime and providing the required bootstrap file.

With the new sam build options, this is easily accomplished with the following steps:

A working sample Go application on AL2 can be found here: https://github.com/aws-samples/sessions-with-aws-sam/tree/master/go-al2.

With AL1, that long-term support is coming to an end. The latest version of AL1, 2018.13, had an original end-of-life date set for June 30, 2020. However, AWS extended this date until December 30, 2020. On this date, AL1 will transition from long-term support (LTS) to a maintenance support period lasting until June 30, 2023. During the maintenance support period, AL1 receives critical and important security updates for a reduced set of packages.

However, AL2 is scheduled for LTS until June 30, 2023 and provides the following support:

As shown in the preceding chart, some runtimes are still mapped to AL1 host operating systems. AWS Lambda is committed to supporting runtimes through their long-term support (LTS) window, as specified by the language publisher. During this maintenance support period, Lambda provides base operating system and patching for these runtimes. After this period, runtimes are deprecated.

According to our runtime support policy, deprecation occurs in two phases:

Based on this timeline and our commitment to supporting runtimes through their LTS, the following schedule is followed for the deprecation of AL1-based runtimes:

AWS is committed to helping developers build their Lambda functions with the latest tools and technology. This post covers two new Lambda runtimes that expand the range of available runtimes on AL2. I discuss the end-of-life schedule of AL1 and why developers should start migrating to AL2 now. Finally, I discuss the remaining runtimes and their plan for support until deprecation, according to the AWS runtime support policy.