Smithy is an interface definition language and set of tools that allows developers to build clients and servers in multiple languages. Smithy models define a service as a collection of resources, operations, and shapes. A Smithy model enables API providers to generate clients and servers in various programming languages, API documentation, test automation, and example code. For more information about Smithy, see the Smithy documentation.

What’s included in the Ruby SDK 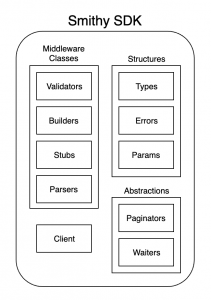 For more information about the components, please see the smithy-ruby wiki.

Middleware are classes that sit between the client and the server, providing a way to modify the request-response cycle. At minimum, middleware is used to build a request, send a request, and parse a response. Middleware is organized in a stack and are responsible for calling the next middleware. 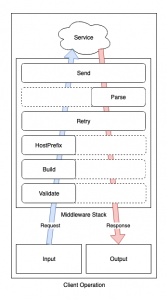 In the client, each API operation will have a method that is responsible for creating its own middleware stack and handling the request and response cycle. Seahorse will ship with 6 default middleware. Each middleware will have access to the request, response, and context.

In detail, the middleware components are:

Protocol implementations may also insert their own code generated middleware. Middleware may also be added at runtime to a Client class or Client instance, and to individual operation calls.

A Smithy built Ruby SDK needs a protocol implementation to fully function, much like a car needs an engine. As part of this developer preview, we will be including a protocol implementation that we are calling “Rails JSON”. With the Rails JSON protocol definition, a Smithy model can be used to code generate a Ruby SDK that communicates directly with a Rails API over JSON. Neat!

As a demo, the following sections will detail how to setup a Rails service and generate an SDK that can communicate with it.

Before we can create an SDK, we need a service for it to communicate to. Let’s first create a new Rails API service with: rails new --api sample-service.

In models/high_score.rb, add a length validation to the game’s name by adding: validates :game, length: { minimum: 2 }. This validation will be used later.

If you aren’t able to generate a Rails app, don’t worry, a copy of this sample Rails service lives in smithy-ruby for now.

To generate the SDK, we need the Smithy model that describes the Rails service we just defined. I’ve conveniently defined this in smithy-ruby in high-score-service.smithy. The model tells smithy-ruby to code generate shapes and a client API for the High Score service and to use Rails’ JSON protocol.

Let’s break down some of the important parts.

The first section tells Smithy to create the HighScoreService using the Rails JSON protocol and define its resources and operations. The resource has an identifier (Rails defaults to id), which is used to look up the High Score. The resource has all of the basic Rails CRUD operations: get, create, update, delete, and list

Next are the operation shapes. The @http trait is applied to each operation with the expected Rails path.

With the model and a Rails service, it’s now time to generate the SDK. Smithy code generation and integration is only available in Java environments. Fortunately, for this demo, the High Score Service SDK has already been generated and committed to the smithy-ruby repo. Download it from here if you are following along!

If you’d like to generate it yourself, or generate your own Smithy model, you can follow the README instructions that detail how to use smithy-ruby in your Gradle project.

Now we have a Rails service and an SDK. Start up irb with irb -I high_score_service/lib and try it out!

We’d like to explore more Smithy Ruby and Rails API use cases. Perhaps a Smithy model can be parsed and translated into a set of rails new and rails generate commands; going further, perhaps a “server-side SDK” can be a pluggable Rails engine that handles building and parsing of concrete types and protocols.

If you have any questions, comments, concerns, ideas, or other feedback, please create an issue or discussion in the smithy-ruby repository. We welcome any SDK design feedback and improvements, and we especially welcome any community contributions.