Synchronizing a fleet of Oracle database environments can become a major operational burden for organizations of all sizes. In this blog post, I explain how you can reduce operational complexity, improve agility, and reduce costs by using Amazon FSx for OpenZFS to clone your Oracle Database data across multiple environments in seconds.

IT operations teams today face the challenging task of managing an ever-increasing quantity of data while maintaining the highest levels of availability, resiliency, and performance. These challenges are amplified at organizations with enterprise resource planning (ERP) and customer relationship management (CRM) application suites. These systems typically involve very large database footprints distributed across development, testing, staging, and other environments.

To keep this fleet of environments up-to-date, database administrators (DBAs) need to manually synchronize data and code from their production database on an ongoing basis. Even with native tools like Recovery Manager (RMAN) or Data Pump, this process can be time-consuming, error-prone, and inefficient, impairing productivity and reducing business agility. In the worst case, DBAs need to provision additional capacity to store multiple distinct copies of the data, increasing costs by as much as 20 times for large distributed deployments.

With Amazon EC2 and Amazon FSx for OpenZFS, you can clone near petabyte-scale Oracle databases in seconds without consuming any additional capacity, increasing refresh speed and reducing resource consumption across your distributed environments. Powered by OpenZFS space-efficient copy-on-write technology, this capability accelerates database synchronization from hours or days with traditional database deduplication to just a few seconds with FSx for OpenZFS cloning.

In this post, I show you how to combine the power of Amazon FSx for OpenZFS with Oracle Database running on Amazon EC2 to accelerate your database cloning process and deliver a cost-optimized storage foundation for your database fleet.

Amazon FSx for OpenZFS is a fully managed shared file storage service built on the OpenZFS file system, powered by the AWS Graviton family of processors, and accessible via the NFS protocol. It is the latest addition to the Amazon FSx family, which delivers feature-rich, secure, and performant file storage powered by popular file systems like NetApp ONTAP, Windows File Server, and Lustre.

There are several ways that you can use Amazon FSx file systems in your Oracle Database deployments. You can use Amazon FSx to provide highly performant and cost-effective shared storage in a highly available Oracle Real Application Cluster (RAC) deployment. You can also attach FSx file systems to individual Oracle Database hosts (as I do in this blog) to take advantage of the fully managed scalability and rich data management capabilities that they offer.

A snapshot is a read-only image of an FSx for OpenZFS volume at a point in time. They are stored alongside your ﬁle system’s data and consume the ﬁle system’s storage capacity. A clone volume is a writable copy that is initialized using a snapshot and initially contains identical data to the snapshot from which it was created. Multiple clones can be created from the same snapshot; they are created instantly and consume no storage capacity until changes are made to those clone volumes. Combined, these capabilities enable you to synchronize multiple non-production environments from your production database in seconds to a consistent point-in-time and powered by the same underlying data. 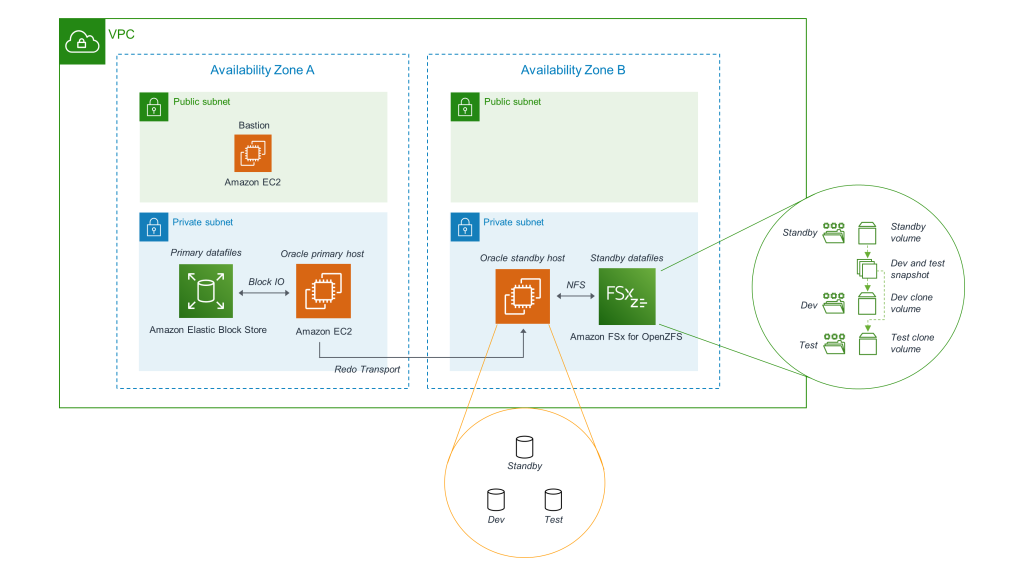 The following is a detailed walkthrough of the steps required to build an environment like the one illustrated in the previous architecture diagram. By stepping through this procedure, you can create a foundation for a solution that leverages the power of Amazon FSx for OpenZFS to optimize and accelerate your Oracle Database cloning procedures. Later in the blog post, I cover some of the finer details to help you build an even more robust and extensible solution.

To create a similar deployment in your own environment, you need to meet the following prerequisites:

The QuickStart deployment consists of three CloudFormation stacks: VPCStack, BastionStack, and OracleStack. The full deployment of all three will take approximately 45 minutes.

The file system will take a few minutes to provision. Once it is complete, you can view its attributes from the FSx console: 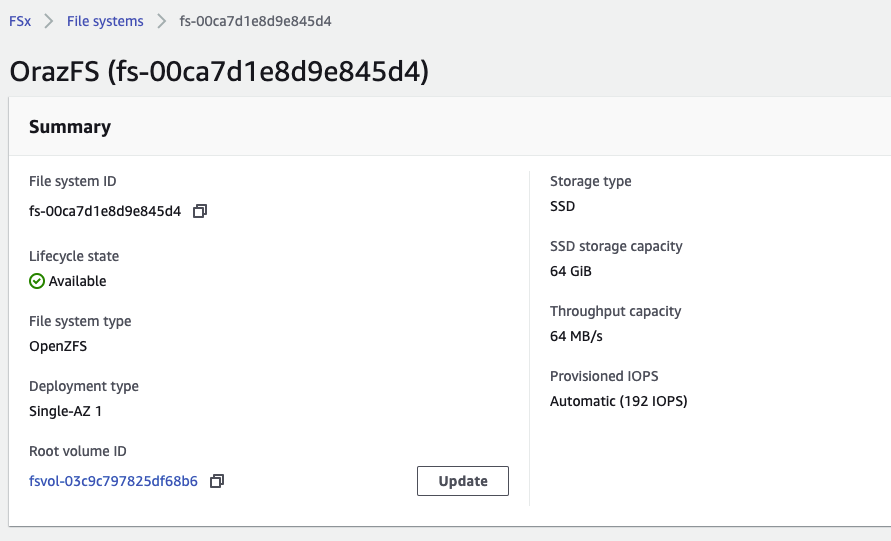 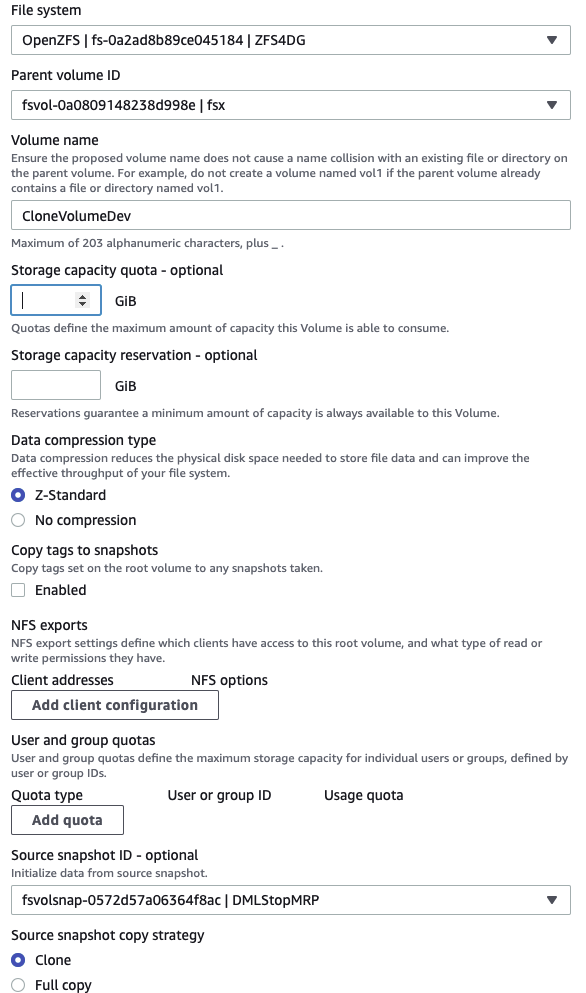 The steps above will help you lay the foundation for space-efficient database cloning. This section will introduce some additional considerations that will allow you to build on top of that foundation to create a robust and easy to maintain solution.

To take advantage of the space-efficient ZFS snapshot and clone technology, the source Oracle database must store its data files on an FSx for OpenZFS volume mounted over NFS. Customers commonly need to refresh their non-production databases from a recent copy of production to capture all of the latest data and code changes and provide a good baseline for testing and staging new products, features, and integrations. Therefore a natural choice is to select the production primary database as the source. Many customers have already deployed Data Guard standby databases for disaster recovery protection and to minimize maintenance impacts on the live system by offloading backups and reporting. In this case, the recommended approach is to use a dedicated Data Guard standby database as the source of all the downstream non-production databases that need to be cloned. This can either be synchronized directly with the primary or cascaded from a preexisting standby. The extra benefit of sourcing from a standby is that the database can be quiesced by temporarily disabling redo apply to provide a consistent point-in-time snapshot that acts as the baseline for cloned volumes. This also simplifies the steps required to rename the cloned database during database refreshes.

The combination of snapshots and clone volumes delivers an optimized data cloning foundation. Creating multiple snapshots and clone volumes from a single source lets you create rapid, space-efficient copies of large datasets with minimal processing overhead and impact. The magic of copy-on-write means that the storage consumption of the snapshot is a function of the rate of change rather than simply a multiple of the source database size.

The storage capacity consumption will start to increase as changes are made to both the source volume and clone volume(s). For that reason, you should closely monitor the file system’s storage consumption. It’s also a good idea to regularly delete unused snapshots and clone volumes to free up capacity.

The database rename at the end of the cloning process is a destructive operation because it recreates the database control file. If the non-production database is running on the same EC2 instance as the source standby database, then extra care needs to be taken to ensure you are only making changes to the file system on the clone volume and not the file system on the source volume. To introduce extra protection, you can choose to split your standby database source and downstream non-production targets onto separate EC2 instances. The choice to do this will depend on your Oracle license entitlements.

Once you have finished using the AWS resources deployed to support this walkthrough, you can delete them to avoid incurring any further charges.

To delete the Oracle Database QuickStart resources, delete the associated CloudFormation stack in the Region it was originally deployed to.

In this blog, I have walked through creating a foundation for a solution that leverages the power of Amazon FSx for OpenZFS to optimize and accelerate Oracle Database cloning procedures and ways to help you build an even more robust and extensible solution. By leveraging the power of space-efficient snapshots and clone volumes available in FSx for OpenZFS, operations teams can mitigate the burden of regularly cloning large numbers of downstream databases from production Oracle databases and satisfy the demands of multiple competing database consumers while keeping storage costs to a minimum.

FSx for OpenZFS is just one option available in the Amazon FSx family of file storage offerings. Customers running Oracle databases can also store their data files on FSx for Netapp ONTAP to gain access to thin provisioning, replication (SnapMirror), and point-in-time cloning (FlexClone). For example, you can also achieve the same space-efficient, rapid cloning with FSx for NetApp ONTAP FlexClones.

While this blog post focused on rapid Oracle database cloning, there are many alternative use cases that could benefit from tapping into the power of FSx for OpenZFS to achieve efficient storage management. Here are a few suggestions for future potential uses of this managed service offering: