As I was getting ready to write this post I spent some time thinking about some of the coding tools that I have used over the course of my career. This includes the line-oriented editor that was an intrinsic part of the BASIC interpreter that I used in junior high school, the IBM keypunch that I used when I started college, various flavors of Emacs, and Visual Studio. The earliest editors were quite utilitarian, and grew in sophistication as CPU power become more plentiful. At first this increasing sophistication took the form of lexical assistance, such as dynamic completion of partially-entered variable and function names. Later editors were able to parse source code, and to offer assistance based on syntax and data types — Visual Studio‘s IntelliSense, for example. Each of these features broke new ground at the time, and each one had the same basic goal: to help developers to write better code while reducing routine and repetitive work.

Announcing CodeWhisperer
Today I would like to tell you about Amazon CodeWhisperer. Trained on billions of lines of code and powered by machine learning, CodeWhisperer has the same goal. Whether you are a student, a new developer, or an experienced professional, CodeWhisperer will help you to be more productive.

We are launching in preview form with support for multiple IDEs and languages. To get started, you simply install the proper AWS IDE Toolkit, enable the CodeWhisperer feature, enter your preview access code, and start typing: 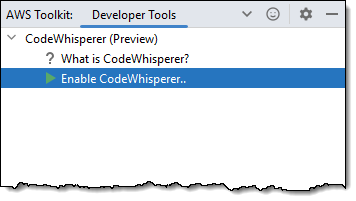 CodeWhisperer will continually examine your code and your comments, and present you with syntactically correct recommendations. The recommendations are synthesized based on your coding style and variable names, and are not simply snippets.

CodeWhisperer uses multiple contextual clues to drive recommendations including the cursor location in the source code, code that precedes the cursor, comments, and code in other files in the same projects. You can use the recommendations as-is, or you can enhance and customize them as needed. As I mentioned earlier, we trained (and continue to train) CodeWhisperer on billions of lines of code drawn from open source repositories, internal Amazon repositories, API documentation, and forums.

CodeWhisperer in Action
I installed the CodeWhisperer preview in PyCharm and put it through its paces. Here are a few examples to show you what it can do. I want to build a list of prime numbers. I type # See if a number is pr. CodeWhisperer offers to complete this, and I press TAB (the actual key is specific to each IDE) to accept the recommendation:

On the next line, I press Alt-C (again, IDE-specific), and I can choose between a pair of function definitions. I accept the first one, and CodeWhisperer recommends the function body, and here’s what I have:

I write a for statement, and CodeWhisperer recommends the entire body of the loop:

CodeWhisperer can also help me to write code that accesses various AWS services. I start with # create S3 bucket and TAB-complete the rest:

I could show you many more cool examples, but you will learn more by simply joining the preview and taking CodeWhisperer for a spin.

Join the Preview
The preview supports code written in Python, Java, and JavaScript, using VS Code, IntelliJ IDEA, PyCharm, WebStorm, and AWS Cloud9. Support for the AWS Lambda Console is in the works and should be ready very soon.

Join the CodeWhisperer preview and let me know what you think!