At FactSet, their goal for cloud platform on AWS Cloud is to have high developer velocity alongside enterprise governance. They wanted application teams to have a frictionless experience that balances agility, governance, and ease of use. They achieved it using micro-accounts, where each AWS account is allocated for one project and is owned by a single team. By using the AWS account as an isolation boundary, each application team can be granted a broad set of permissions to explore and innovate within their own accounts.

Source Control as source of truth

They help maintain compliance across account, IAM role, and IAM policy configuration, and use automation to detect drift and correct it. This helps them to maintain these roles across thousands of micro-accounts. The benefit of having source control as source of truth allowed them to start every account with a standard default configuration that follows approved best practices, but still allow flexibility for adjustments per account that limits the scope of impact from an AWS Identity and Access Management (IAM) policy change. This is a common paradigm in several areas described later in this blog.

Their micro-accounts have a layered authorization model, starting with IAM roles and Service Control Policies (SCP) as the foundation for what is permitted inside of an account. They use IAM roles to delegate access to users, applications, or services. SCPs are policies that they use to manage permissions in their organization. SCPs allow them to have central control over the maximum available permissions for all accounts in our organization. Each micro-account comes with standard IAM roles and SCPs, both for interactive use in addition to for automation (Figure 1). 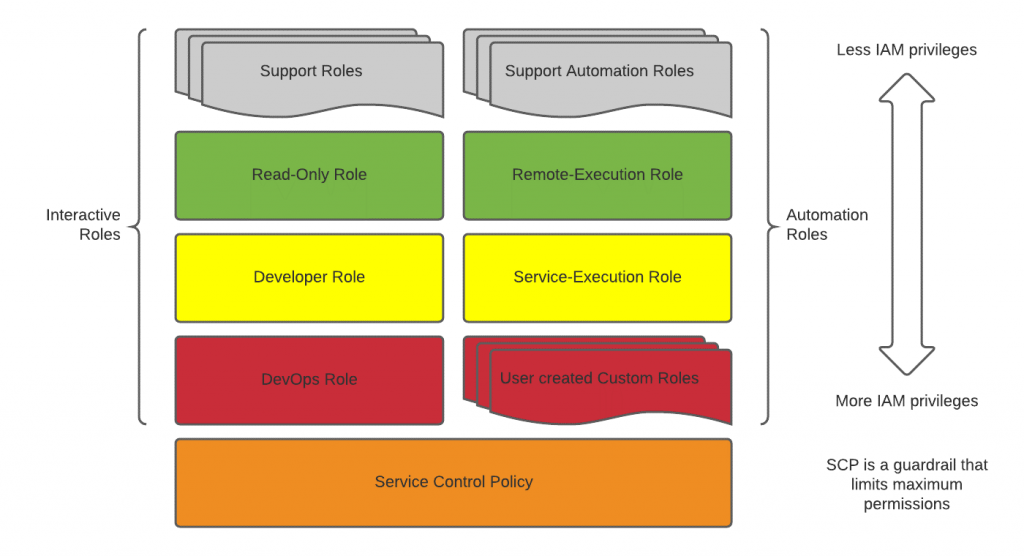 Figure 1 – Authorization model for a micro-account

Service Control Policies are an important part of their governance. They provide enterprise-level control by defining guardrails, or setting limits, on any permissions that may be granted within a given micro-account.  Some examples of SCPs for micro-accounts that they use are:

In order to realize the benefit of SCPs while retaining maximum flexibility, they create SCPs from a template, store them in source control, and attach them at the account level per micro-account (Figure 2).

With flexibility, there are few things that need to be controlled: 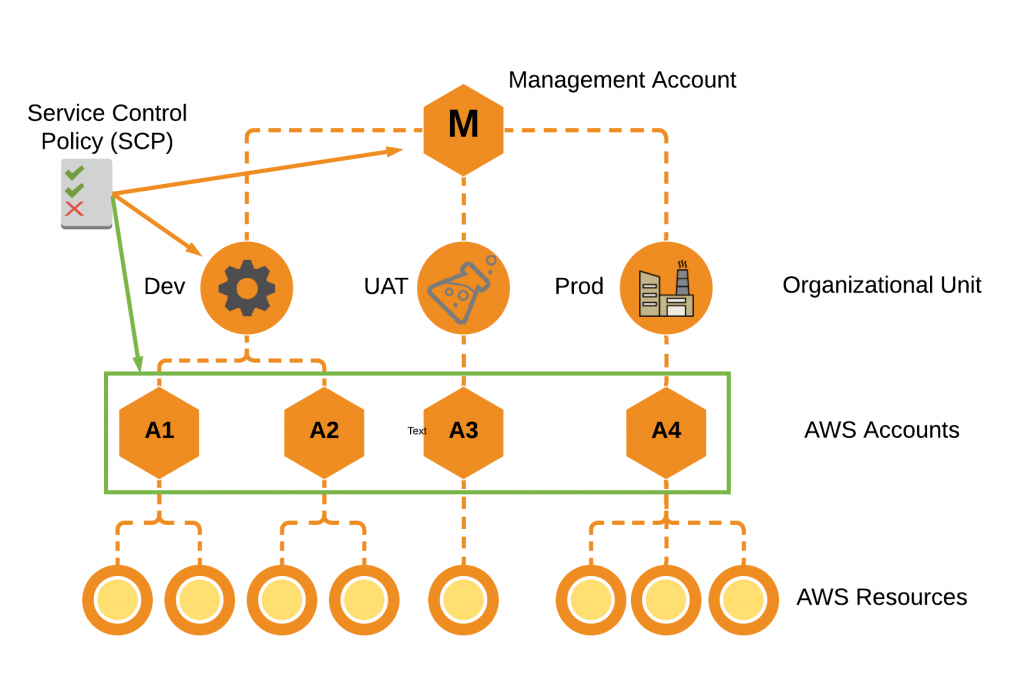 They provision each micro-account with three standard interactive IAM roles for use solely by the application team.

Note – Developer and DevOps interactive roles can only be assumed for production environments via the Breakglass mechanism. See following section on Break-glass.

In their environment, certain teams like Cloud Administrators, Information Security, and Infrastructure play a fundamental role in supporting the application teams. Some examples of this are: performing security audits, managing billing, debugging database issues or networking problems.

There are a set of standard interactive support roles in every micro-account that allows these support teams have access to all AWS accounts to support and collaborate with application teams. Having role-based access helps ensures least-privilege for the central support teams to successfully do their work in each account and support the AWS account owners.

They allow interactive roles in every micro-account to be assumed by specific Active Directory groups. These Active Directory groups are owned by individuals responsible for each project and hence have the knowledge and ability to maintain the group membership themselves. This was intentionally done to lower the operational overhead on central cloud teams as well as allowing the application owner to control who has access to their account.

Like the interactive support roles, they also have central cloud teams to support application teams with automation to do things like perform policy enforcement, deploy/maintain infrastructure, monitor accounts for governance, inventory and security.

One example of this is the automated patching of EC2 instances in the application teams’ account. The central cloud infrastructure team uses automation to assume a specific automation role in each target account to perform the patching workflow. Having these roles and specific teams supporting these common workflows for our several hundred micro-accounts really takes away a lot of maintenance responsibilities from the owning teams.

One of the features of the AWS IAM service that they found very beneficial from a flexibility and operations perspective is safe delegation of IAM role/policy editing using permission boundaries. They use permission boundaries for IAM to control the maximum set of permissions that any application team can grant in each account.

The standard DevOps role includes a policy statement that allows IAM role and policy CRUD actions if the required permission boundary is attached, as shown in the following policy. This has enabled individual application teams to define and provision new custom roles/policies as needed, while the central cloud team still gets to enforce governance across the enterprise. The permission boundary has the same policy content as the DevOps role IAM policy.

This is example DevOps IAM policy with permission boundary.

They handle Authentication and Authorization of interactive logins and programmatic logins through a single central API that communicates with an IdP and AWS Security Token Service (AWS STS) on the backend to provide the needed credentials to access the AWS Account (Figure 3).

They provide three main interfaces for users to access their accounts. All these interfaces use the same central API to get credentials for the user.

They created a web portal to provide a user-friendly UI for the users. This allows users to see which accounts and roles they have access to in a single view. From the web portal they can easily get console access across their AWS account. Other helpful features include a view of break-glass status as well as click-button functionality to export the credentials for use in AWS CLI.

To enhance the experience of developers who would prefer not to swap between a command line interface and a web browser, they built a CLI tool for developers to perform the same process of authentication, authorization and getting temporary credentials for a given account and role. This helps improve developer efficiency when working with multiple AWS accounts and goes hand in hand with using the AWS CLI.

Having an API interface was also essential for programmatic access which is to be used by service accounts to access the remote-execution-role in an account. Credentials for the service account are passed into the API to get valid temporary credentials from AWS STS.

Interactive users use Web Portal or CLI and provide the required corporate credentials, which in turn calls the AWS STS API. That user request is then authenticated with the IdP.  Similarly, for service accounts we support authenticating service accounts for programmatic access to developer automation roles like the remote-start (execution).

For individual users they keep mappings in a central database. This mapping determines which IAM role and account that the user can assume. The source of truth for this is in source control and we enforce them regularly to correct drift and to make any new changes.

When it comes to application service principals, they authorize access to assume a single role in a single account.  As with individual roles they keep it in source control and enforced regularly across all accounts.

During the authorization phase they have implemented the ability to grant elevated access permissions when necessary (break-glass). This is a form of conditional-access where they we check to make sure all requirements are met before the user is considered to be completely authorized. The break-glass feature is required to assume any interactive IAM role that can make changes as well as for any corresponding OS level access for Amazon EC2 in production AWS environments. Having a central API for authentication and authorization made implementation of this feature easy as there is a single gate.

One of their design principles for the identity model was to make IAM roles and temporary credentials the primary IAM principal type used with AWS instead of long-lived IAM user credentials. Application teams have the flexibility to choose the length of time for their authenticated session up to a defined maximum duration. Once the user is authenticated and authorized for a given account and role, we create valid temporary credentials using AWS Simple Token Service (STS). With the valid temporary AWS credential, they are able to give their users console access or to export them for use with AWS CLI or SDKs.

Building a custom identity system can be complex and may not be for everyone. They actually started by using the AWS Single Sign-on service when it was initially released and they had a small number of AWS accounts to manage. As FactSet’s multi-account strategy became clear, the scale of micro-accounts drove them to look for solutions in the following areas:

The business requirements for FactSet outweighed the cost of engineering a new custom solution, as well as any required on-going engineering maintenance and operations. Since that time, many things have improved in the AWS SSO service. Some of the features they required have been added over time.

For others that may consider building their own solution, perhaps start by using source control as the source of truth for IAM policy and role configuration. FactSet recommends this as it makes management of resources at scale much easier. For the other parts, it would be good to consider the pros and cons of developing a custom authentication/authorization API.

Identity plays a critical part in securely operating in the cloud. In FactSet’s case having the account be the delineation between different application teams greatly simplified permissions. The micro-account strategy approach we outlined uses a premise that each account’s IAM roles and policies are driven from an account-specific location in source control and are applied with automation. We hope this overview of the identity model used with FactSet’s AWS micro-accounts gives you some ideas on how to balance developer velocity with security and governance at scale.

In their own words, FactSet creates flexible, open data and software solutions for tens of thousands of investment professionals around the world, which provides instant access to financial data and analytics that investors use to make crucial decisions. At FactSet, we are always working to improve the value that our products provide.