We launched the first generation (A1) of Arm-based, Graviton-powered EC2 instances at re:Invent 2018. Since that launch, thousands of our customers have used them to run many different types of scale-out workloads including containerized microservices, web servers, and data/log processing.

The Operating System Vendors (OSV) and Independent Software Vendor (ISV) communities have been quick to embrace the Arm architecture and the A1 instances. You have your pick of multiple Linux & Unix distributions including Amazon Linux 2, Ubuntu, Red Hat, SUSE, Fedora, Debian, and FreeBSD: 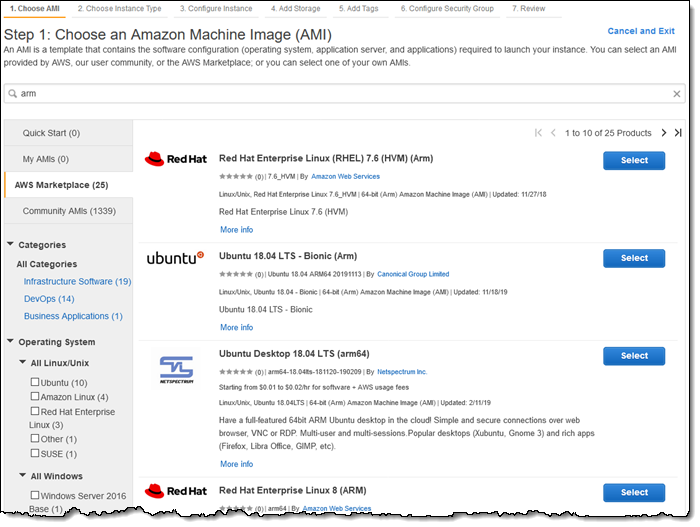 The feedback on these instances has been strong and positive, and our customers have told us that they are ready to use Arm-based servers on their more demanding compute-heavy and memory-intensive workloads.

Graviton2
Today I would like to give you a sneak peek at the next generation of Arm-based EC2 instances. These instances are built on AWS Nitro System and will be powered by the new Graviton2 processor. This is a custom AWS design that is built using a 7 nm (nanometer) manufacturing process. It is based on 64-bit Arm Neoverse cores, and can deliver up to 7x the performance of the A1 instances, including twice the floating point performance. Additional memory channels and double-sized per-core caches speed memory access by up to 5x.

All of these performance enhancements come together to give these new instances a significant performance benefit over the 5th generation (M5, C5, R5) of EC2 instances. Our initial benchmarks show the following per-vCPU performance improvements over the M5 instances:

Based on these results, we are planning to use these instances to power Amazon EMR, Elastic Load Balancing, Amazon ElastiCache, and other AWS services.

The new instances raise the already-high bar on AWS security. Building on the existing capabilities of the AWS Nitro System, memory on the instances is encrypted with 256-bit keys that are generated at boot time, and which never leave the server.

The instances will have up to 25 Gbps of network bandwidth, 18 Gbps of EBS-Optimized bandwidth, and will also be available in bare metal form. I will have more information to share with you in 2020.

M6g Preview
We are now running a preview of the M6g instances for testing on non-production workloads; if you are interested, please contact us.