We launched the Developer Preview of the FPGA-equipped F1 instances at AWS re:Invent. The response to the announcement was quick and overwhelming! We received over 2000 requests for entry, and were able to provide over 200 developers with access to the Hardware Development Kit (HDK) and the actual F1 instances.

In the post that I wrote for re:Invent, I told you that:

During the preview, partners and developers have been working on all sorts of exciting tools, services, and applications. I’ll tell you more about them in just a moment.

Now Generally Available
Today we are making the F1 instances generally available in the US East (N. Virginia) Region, with plans to bring them to other regions before too long.

We continued to add features and functions during the preview, while also making the development tools more efficient and easier to use. Here’s a summary:

Developer Community – We launched the AWS FPGA Development Forum to provide a place for FPGA developers to hang out and to communicate with us and with each other.

HDK and SDK – We published the EC2 FPGA Hardware (HDK) and Software Development Kit to GitHub, and made many improvements in response to feedback that we received during the preview. 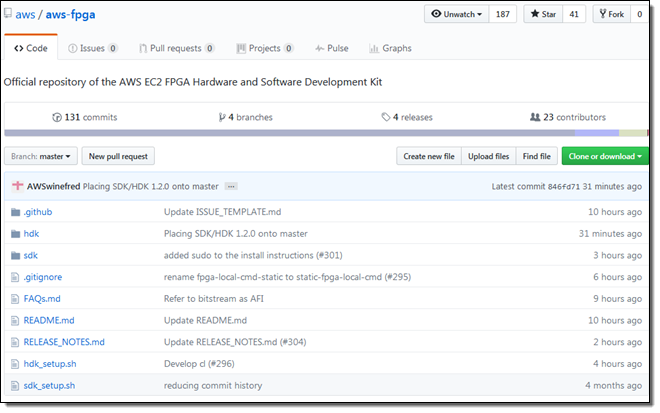 The improvements include support for VHDL (in addition to Verilog), an improved virtual lab environment (Virtual JTAG, Virtual LED, and Virtual DipSwitch), AWS libraries for FPGA management and the FPGA runtime, and support for OpenCL including the AWS OpenCL runtime library.

FPGA Developer AMI – This Marketplace AMI contains a full set of FPGA development tools including an RTL compiler and simulator, along with Xilinx SDAccel for OpenCL development, all tuned for use on C4, M4, and R4 instances.

FPGAs At Work
Here’s a sampling of the impressive work that our partners have been doing with the F1’s:

Edico Genome is deploying their DRAGEN Bio-IT Platform on F1 instances, with the expectation that it will provide whole-genome sequencing that runs in real time.

Reconfigure.io launched a cloud-based service that allows you to program FPGAs using the Go programming language. You can build, test, and deploy your code from within their cloud-based environment while taking advantage of concurrency-oriented language features such as goroutines (lightweight threads), channels, and selects.

NGCodec ported their RealityCodec video encoder to the F1 and used it to produce broadcast-quality video at 80 frames per second. Their solution can encode up to 32 independent video streams on a single F1 instance (read their new post, You Deserve Better than Grainy Giraffes, to learn more).

FPGAs In School & Research
Research groups and graduate classes at top-tier universities contacted us via AWS Educate and were eager to gain access to F1 instances.

UCLA‘s CS133 class (Parallel and Distributed Computing) is setting up an F1-based FPGA lab that will be operational within 3 or 4 weeks. According to UCLA Chancellor’s Professor Jason Cong, they are expanding multiple research projects to cover F1 including FPGA performance debugging, machine learning acceleration, Spark to FPGA compilation, and systolic array compilation.