We launched Amazon Elastic File System (Amazon EFS) in production form a little over a year ago (see Amazon Elastic File System – Production Ready in Three Regions for more information). Later in the year we added On-Premises access via Direct Connect and made EFS available in the US East (Ohio) Region, following up this year with availability in the Europe (Frankfurt) and Asia Pacific (Sydney) Regions.

Encryption at Rest
Today we are adding support for encryption of data at rest. When you create a new file system, you can select a key that will be used to encrypt the contents of the files that you store on the file system. The key can be a built-in key that is managed by AWS or a key that you created yourself using AWS Key Management Service (AWS KMS). File metadata (file names, directory names, and directory contents) will be encrypted using a key managed by AWS. Both forms of encryption are implemented using an industry-standard AES-256 algorithm.

You can set this up in seconds when you create a new file system. You simply choose the built-in key (aws/elasticfilesystem) or one of your own:

EFS will take care of the rest! You can select the filesystem in the console to verify that it is encrypted as desired: 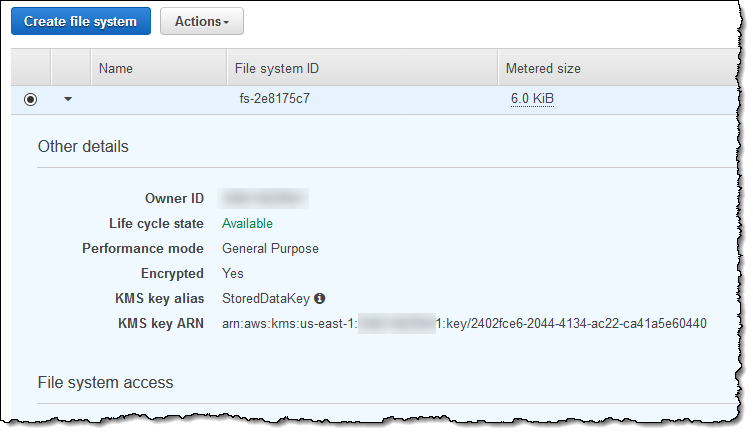 A cryptographic algorithm that meets the approval of FIPS 140-2 is used to encrypt data and metadata. The encryption is transparent and has a minimal effect on overall performance.

You can use AWS Identity and Access Management (IAM) to control access to the Customer Master Key (CMK). The CMK must be enabled in order to grant access to the file system; disabling the key prevents it from being used to create new file systems and blocks access (after a period of time) to existing file systems that it protects. To learn more about your options, read Managing Access to Encrypted File Systems.

Available Now
Encryption of data at rest is available now in all regions where EFS is supported, at no additional charge.