Data analytics workloads are increasingly being migrated to the cloud. Amazon EMR is a cloud-native big data platform that makes it easy to process vast amounts of data quickly and cost effectively at scale.

Amazon EMR, along with Amazon Simple Storage Service (Amazon S3) provides a flexible storage platform. With the click of a few buttons or the run of a single command, you can create a 5-node or 500-node cluster. However, for certain workloads, data engineers and data platform teams may want an added performance boost for Apache Spark and Presto jobs. In particular, they may want to reuse the same data over and over again.

Alluxio is a data orchestration layer. Data orchestration technology brings your data closer to compute across clusters, regions, clouds, and countries. With a data orchestration platform, you get data locality for memory-speed access for your big data and AI/ML workloads, data accessibility regardless of where data resides, and data on-demand so you can abstract and independently scale compute and storage.

It enables users to increase the performance and flexibility of analytic workloads running on Amazon EMR while using S3 for storage.

Alluxio helps accelerate workloads that read and write data running on Amazon S3. It does this by providing a tiered caching layer using memory, Solid State Disks (SSDs), and disks. Alluxio provides Hadoop Distributed File System (HDFS) and S3 API compatibility for compute frameworks like Apache Spark, Presto and Hive that execute on top of Alluxio. It is also compatible with storage systems integrated below Alluxio.

Alluxio has a cache that includes multi-tiered storage. With tiered storage, data is stored in different tiers based on performance, availability, and recovery requirements. This gives users the ability to lower costs based on performance. With Alluxio, the fastest input/output tier is typically on the top. An eviction process removes old or “cold” data out to make room for newer, “hot” data. Users can choose an eviction policy like least recently used (LRU). It also intelligently accounts for the ordering of storage tiers. For example, users often specify the following storage tiers:

The following diagram shows how Alluxio provides tiered caching for data within an Amazon EMR instance. The tiers include disk, SSD, and RAM and integrate with Apache Spark, Presto, and Hive. Other compute frameworks can be automatically integrated to use Alluxio using a bootstrap action mechanism that Amazon EMR provides. 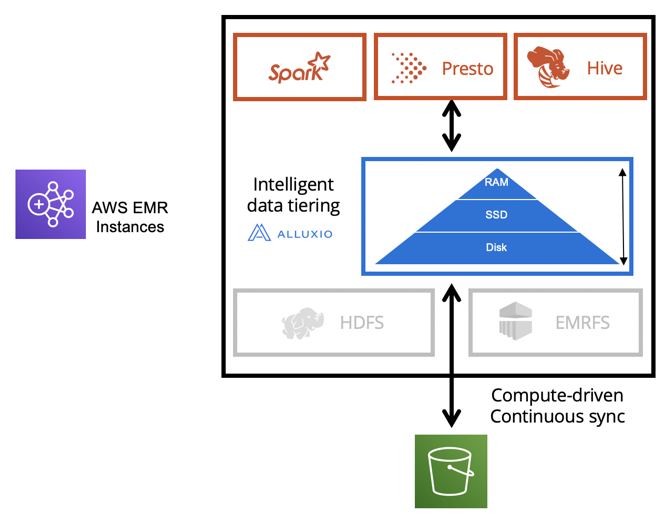 STEP 1: Subscribe to the Alluxio AMI in AWS Marketplace

The Alluxio AMI is now associated with your account. The subscription includes a seven-day free trial. After the trial, you will automatically be billed at an hourly rate based on your instance type.

STEP 2: Set up the IAM roles required for Amazon EMR

This command will not return anything if the role already exists. It will return information about the roles created if they don’t exist as shown in the AWS CLI documentation.

STEP 3: Create the Amazon EMR cluster with this script

Amazon EMR enables you to bring up a cluster with Alluxio pre-installed on the cluster using the bootstrap action mechanism.

On the AWS CLI, I entered the following Amazon EMR command. This creates a cluster using the Alluxio bootstrap script, the path of which is included in the following command (s3://alluxio-public/emr/2.0.1/alluxio-emr.sh). It uses the Alluxio AMI from AWS Marketplace.

This command will return the cluster ID if successful.

You can customize the preceding command by changing the following elements according to your needs.

When you SSH into the master node, you get access to the entire EMR cluster and Alluxio to run a variety of commands. You will be logging in as the Hadoop user, which gives you access to administration of the cluster.

Congratulations! Your Spark, Hive, and Presto workloads are now using Alluxio to access and store data. You’ll experience faster performance for your queries and jobs. Data is also asynchronously written back to S3. This means that the application does not need to wait for data to be written to S3 to continue, which leads to faster workloads.

STEP 6: Create a table in Alluxio

Now that your cluster is up and running, try using the cache within the AWS EMR instance for a faster workload. To do this, create a table using Presto stored in Alluxio and backed by S3.

Running these commands will create a new user directory and allow the Hadoop user to read and write to this directory.

This command will bring up the Presto CLI and allow you to type in Structured Query Language (SQL) queries to read data from Alluxio.

This creates a new table with name user and schema mentioned in the statement, with the location as Alluxio. This means that any data added to this table will be automatically cached in Alluxio.

This command will insert two rows of records into the table and store this data in the Alluxio cache.

This command returns the two records you just inserted into Alluxio. The larger the dataset you have cached, the better the performance of your queries and workload.

In this tutorial, I showed how you can bootstrap an Amazon EMR Cluster with Alluxio. Alluxio caches metadata and data for your jobs to accelerate them. By using this cache, Presto, Spark, and Hive queries that run in Amazon EMR can run up to five times faster and run more concurrent queries. As a result, workloads run more efficiently, and users can run more complex workloads with the same number of resources.

Dipti Borkar is Vice President of Products at Alluxio. Dipti’s interests like in technology areas like databases, cloud computing, and advanced analytics.