Java is a popular language used by many enterprises today. To simplify and accelerate Java application development, many companies are moving from a monolithic to microservices architecture. For some, it has become a strategic imperative. Containerization technology, such as Docker, lets enterprises build scalable, robust microservice architectures without major code rewrites.

In this post, I cover how to containerize a monolithic Java application to run on Docker. Then, I show how to deploy it on AWS using Amazon Elastic Container Service (Amazon ECS), a high-performance container management service. Finally, I show how to break the monolith into multiple services, all running in containers on Amazon ECS.

For this example, I use the Spring Pet Clinic, a monolithic Java application for managing a veterinary practice. It is a simple REST API, which allows the client to manage and view Owners, Pets, Vets, and Visits.

It is a simple three-tier architecture: 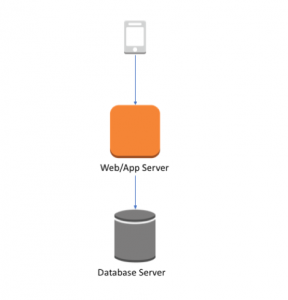 I decided to not put the database inside a container as containers were designed for applications and are transient in nature. The choice was made even easier because you have a fully managed database service available with Amazon RDS.

RDS manages the work involved in setting up a relational database, from provisioning the infrastructure capacity that you request to installing the database software. After your database is up and running, RDS automates common administrative tasks, such as performing backups and patching the software that powers your database. With optional Multi-AZ deployments, Amazon RDS also manages synchronous data replication across Availability Zones with automatic failover.

You can find the code for the example covered in this post at amazon-ecs-java-microservices on GitHub.

You need the following to walk through this solution:

Also, install the latest versions of the following:

You can find the monolith example at 1_ECS_Java_Spring_PetClinic.

The following diagram is an overview of what the setup looks like for Amazon ECS and related services: 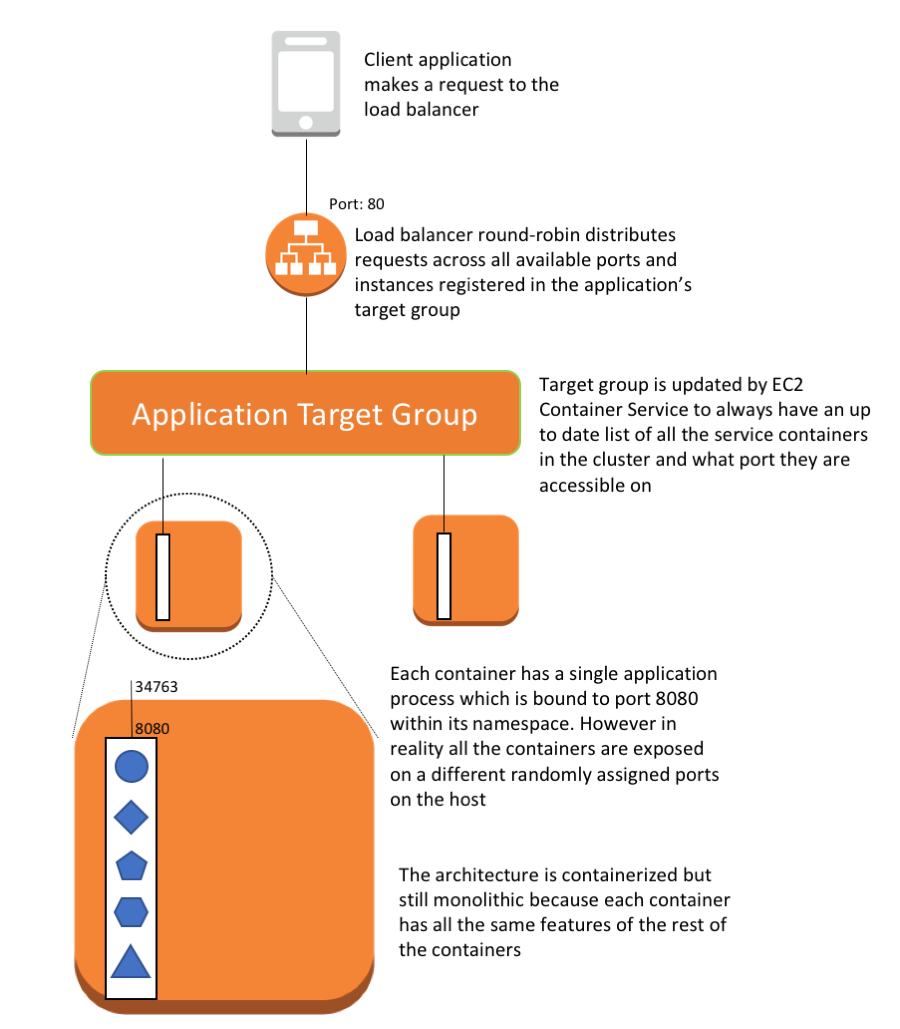 This setup consists of the following resources:

Each container has a single application process that is bound to port 8080 within its namespace. In reality, all the containers are exposed on a different, randomly assigned port on the host.

The following is also part of the solution but not depicted in the above diagram:

I have automated setup with the 1_ECS_Java_Spring_PetClinic/ecs-cluster.cf AWS CloudFormation template and a Python script.

The Python script calls the CloudFormation template for the initial setup of the VPC, Amazon ECS cluster, and RDS instance. It then extracts the outputs from the template and uses those for API calls to create Amazon ECR repositories, tasks, services, Application Load Balancer, and target groups.

As part of the Python script, you pass in a number of environment variables to the container as part of the task/container definition:

The preceding environment variables work in concert with the Spring property system. The value in the variable SPRING_PROFILES_ACTIVE, makes Spring use the MySQL version of the application property file. The other environment files override the following properties in that file:

Optionally, you can also encrypt sensitive values by using Amazon EC2 Systems Manager Parameter Store. Instead of handing in the password, you pass in a reference to the parameter and fetch the value as part of the container startup. For more information, see Managing Secrets for Amazon ECS Applications Using Parameter Store and IAM Roles for Tasks.

Use the Spotify Docker Maven plugin to create the image and push it directly to Amazon ECR. This allows you to do this as part of the regular Maven build. It also integrates the image generation as part of the overall build process. Use an explicit Dockerfile as input to the plugin.

The Python script discussed earlier uses the AWS CLI to authenticate you with AWS. The script places the token in the appropriate location so that the plugin can work directly against the Amazon ECR repository.

You can test the setup by running the Python script:
python setup.py -m setup -r <your region>

After the script has successfully run, you can test by querying an endpoint:
curl <your endpoint from output above>/owner

You can clean this up before going to the next section:
python setup.py -m cleanup -r <your region>

Step 2: Converting the monolith into microservices running on Amazon ECS

The second step is to convert the monolith into microservices. For a real application, you would likely not do this as one step, but re-architect an application piece by piece. You would continue to run your monolith but it would keep getting smaller for each piece that you are breaking apart.

Find the monolith example at 2_ECS_Java_Spring_PetClinic_Microservices.
You break apart the Spring Pet Clinic application by creating a microservice for each REST API operation, as well as creating one for the system services.

Comparing the project structure between the monolith and the microservices version, you can see that each service is now its own separate build.
First, the monolith version: 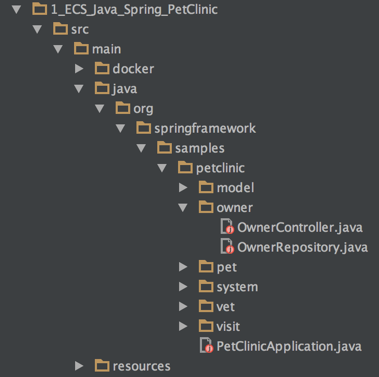 You can clearly see how each API operation is its own subpackage under the org.springframework.samples.petclinic package, all part of the same monolithic application.
This changes as you break it apart in the microservices version: 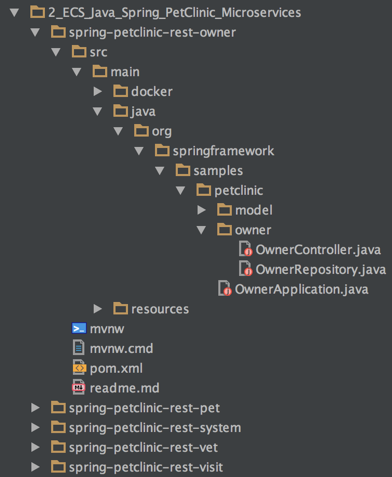 Now, each API operation is its own separate build, which you can build independently and deploy. You have also duplicated some code across the different microservices, such as the classes under the model subpackage. This is intentional as you don’t want to introduce artificial dependencies among the microservices and allow these to evolve differently for each microservice.

Also, make the dependencies among the API operations more loosely coupled. In the monolithic version, the components are tightly coupled and use object-based invocation.

Here is an example of this from the OwnerController operation, where the class is directly calling PetRepository to get information about pets. PetRepository is the Repository class (Spring data access layer) to the Pet table in the RDS instance for the Pet API:

In the microservice version, call the Pet API operation and not PetRepository directly. Decouple the components by using interprocess communication; in this case, the Rest API. This provides for fault tolerance and disposability.

You now have an additional method that calls the API. You are also handing in the service endpoint that should be called, so that you can easily inject dynamic endpoints based on the current deployment.

Here is an overview of what the setup looks like for Amazon ECS and the related services: 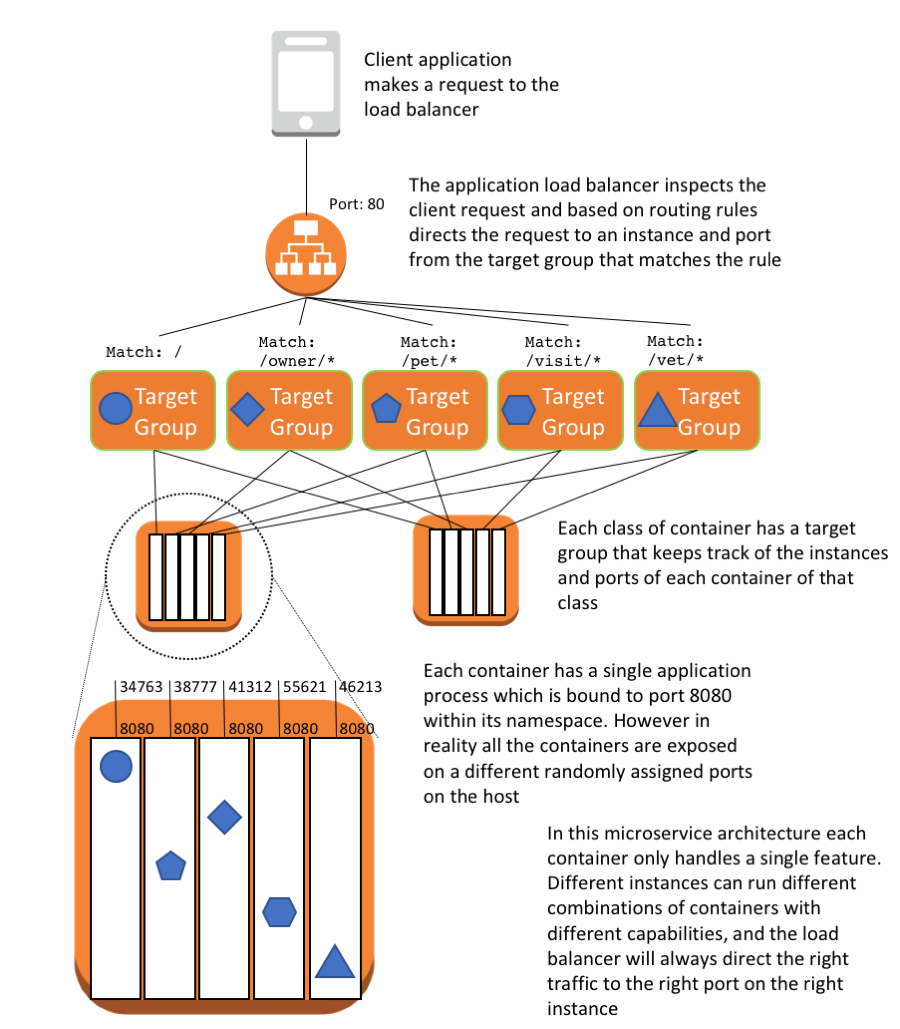 This setup consists of the following resources:

The following is also part of the solution but not depicted in the above diagram:

I have again automated setup with the 2_ECS_Java_Spring_PetClinic_Microservices/ecs-cluster.cf CloudFormation template and a Python script.

The CloudFormation template remains the same as in the previous section. In the Python script, you are now building five different Java applications, one for each microservice (also includes a system application). There is a separate Maven POM file for each one. The resulting Docker image gets pushed to its own Amazon ECR repository, and is deployed separately using its own service/task definition. This is critical to get the benefits described earlier for microservices.

Here is an example of the POM file for the Owner microservice:

You can test this by running the Python script:

After the script has successfully run, you can test by querying an endpoint:

curl <your endpoint from output above>/owner

Migrating a monolithic application to a containerized set of microservices can seem like a daunting task. Following the steps outlined in this post, you can begin to containerize monolithic Java apps, taking advantage of the container runtime environment, and beginning the process of re-architecting into microservices. On the whole, containerized microservices are faster to develop, easier to iterate on, and more cost effective to maintain and secure.

This post focused on the first steps of microservice migration. You can learn more about optimizing and scaling your microservices with components such as service discovery, blue/green deployment, circuit breakers, and configuration servers at http://aws.amazon.com/containers.