Part 1 explores standardizing a debugging approach in Lambda and explains troubleshooting Lambda payloads. This post looks at solving errors that can arise from Lambda function configurations.

You can configure a Lambda function to use between 128 MB and 10,240 MB. By default, any function created in the console is assigned the smallest amount of memory. While many Lambda functions are performant at this lowest setting, if you are importing large code libraries or completing memory-intensive tasks, 128 MB is not sufficient.

If functions are running much slower than expected, the first step is to increase the memory setting. For memory-bound functions, this resolves the bottleneck and may improve the performance of your function.

For compute-intensive operations, if you experience slower-than-expected performance of your Lambda function, this may be due to your function being CPU-bound. In this case, the computational capacity of the function cannot keep pace with the work.

While there is no CPU configuration directly exposed in Lambda configurations, this is indirectly controlled via the memory settings. The Lambda service proportionally allocates more virtual CPU as you allocate more memory. At 1.8 GB of the memory, a Lambda function has an entire vCPU allocated, and above this level it has access to more than one vCPU core. At 10,240MB, it has 6 vCPUs available.

In these cases, you can improve performance by increasing the memory allocation, even if the function doesn’t use all of the memory.

In the Document Repository example, the Lambda functions that process objects from the document bucket have 3-second timeout values. These functions may time out for all of these reasons: 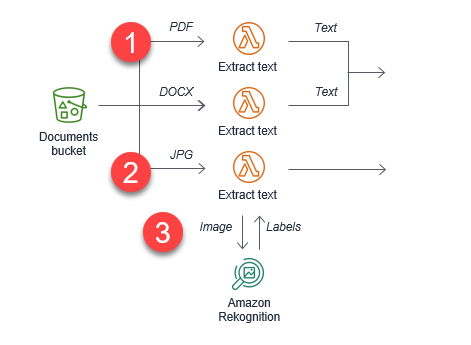 Timeouts are a safety mechanism and in normal operation do not have a negative impact on cost, since the Lambda service charges by duration. To avoid unexpected timeouts, ensure that your timeout values are not set too close to the average duration of a function.

In testing your application, ensure that your tests accurately reflect the size and quantity of data, and use realistic parameter values. Tests often use small samples for convenience but you should use datasets at the upper bounds of what is reasonably expected for your workload.

Implement upper-bound limits in your workload wherever practical. In this example, the application could use a maximum size limit for each file type. You can then test the performance of your application for a range of expected file sizes, up to and including the maximum limits.

Global variables and objects stored in the INIT phase of a Lambda invocation retain their state between warm invocations. They are completely reset only when the execution environment is run for the first time (also known as a “cold start”). Any variables stored in the handler are destroyed when the handler exits. It’s best practice to use the INIT phase to set up database connections, load libraries, create caches, and load immutable assets.

When you use third-party libraries across multiple invocations in the same execution environment, be sure to check their documentation for usage in a serverless compute environment. Some database connection and logging libraries may save intermediate invocation results and other data. This causes the memory usage of these libraries to grow with subsequent warm invocations. In cases where memory grows rapidly, you may find the Lambda function runs out of memory, even if your custom code is disposing of variables correctly.

This issue affects invocations occurring in warm execution environments. For example, the following code creates a memory leak between invocations. The Lambda function consumes additional memory with each invocation by increasing the size of a global array:

Configured with 128 MB of memory, after invoking this function 1000 times, the Monitoring tab of the Lambda function shows the typical changes in invocations, duration, and error counts when a memory leak occurs:

After the error, the Lambda service restarts the execution environment, which explains why in all three graphs the metrics return to the original state. Expanding the Amazon CloudWatch metrics for duration provides more detail for the minimum, maximum and average duration statistics:

To find the errors generated across the 1000 invocations, you can use the CloudWatch Logs Insights query language. To following query excludes informational logs to report only the errors:

When run against the log group for this function, this shows that timeouts were responsible for the periodic errors: 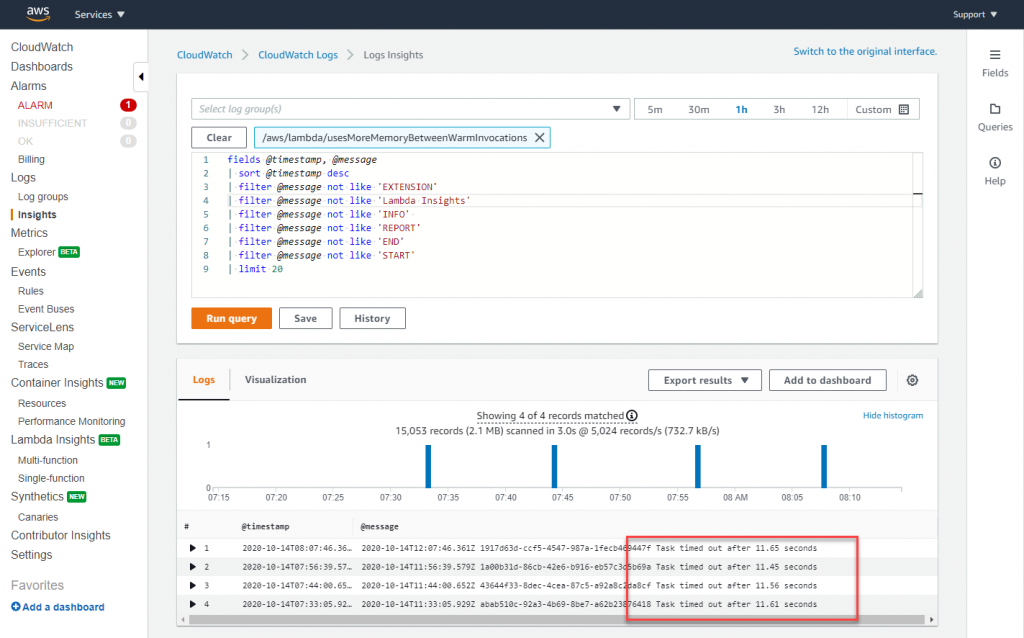 When invoked several times in succession, the results of the callbacks occur in subsequent invocations: 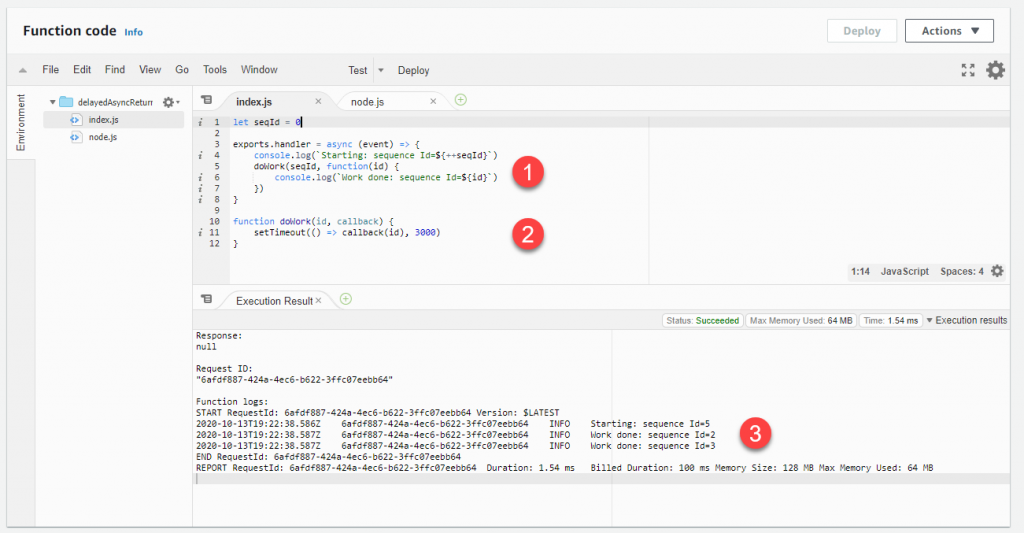 In JavaScript, asynchronous callbacks are handled with an event loop. Other runtimes use different mechanisms to handle concurrency. When the function’s execution environment ends, the Lambda service freezes the environment until the next invocation. After it is resumed, JavaScript continues processing the event loop, which in this case includes an asynchronous callback from a previous invocation. Without this context, it can appear that the function is running code for no reason, and returning arbitrary data. In fact, it is really an artifact of how runtime concurrency and the execution environments interact.

This creates the potential for private data from a previous invocation to appear in a subsequent invocation. There are two ways to prevent or detect this behavior. First, JavaScript provides the async and await keywords to simplify asynchronous development and also force code execution to wait for an asynchronous call to complete. The function above can be rewritten using this approach as follows:

Using this syntax prevents the handler from exiting before the asynchronous function is finished. In this case, if the callback takes longer than the Lambda function’s timeout, the function throws an error, instead of returning the callback result in a later invocation: 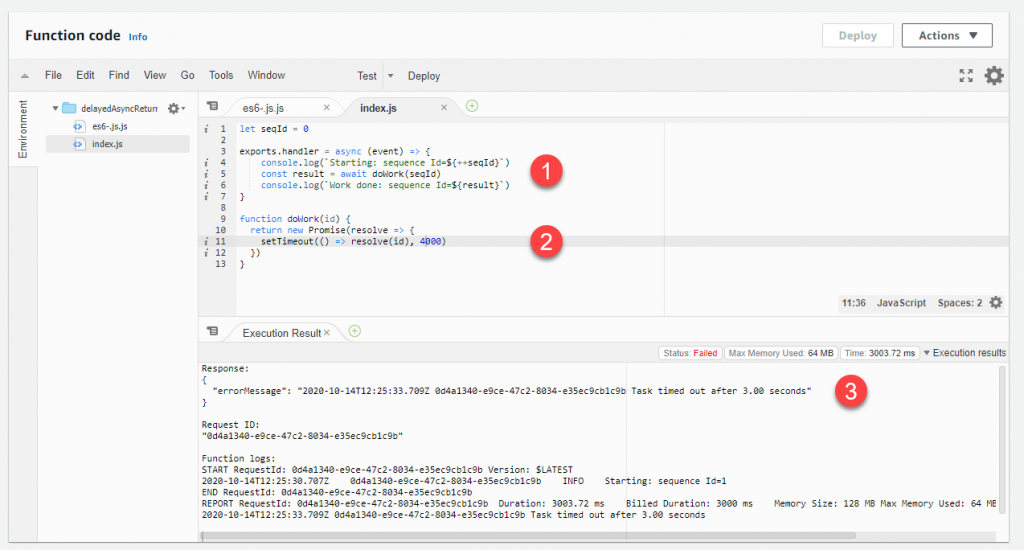 Generally, you should make sure any background processes or callbacks in the code are complete before the code exits. If this is not possible in your use case, you can use an identifier to ensure that the callback belongs to the current invocation. To do this, you can use the awsRequestId provided by the context object. By passing this value to the asynchronous callback, you can compare the passed value with the current value to detect if the callback originated from another invocation: 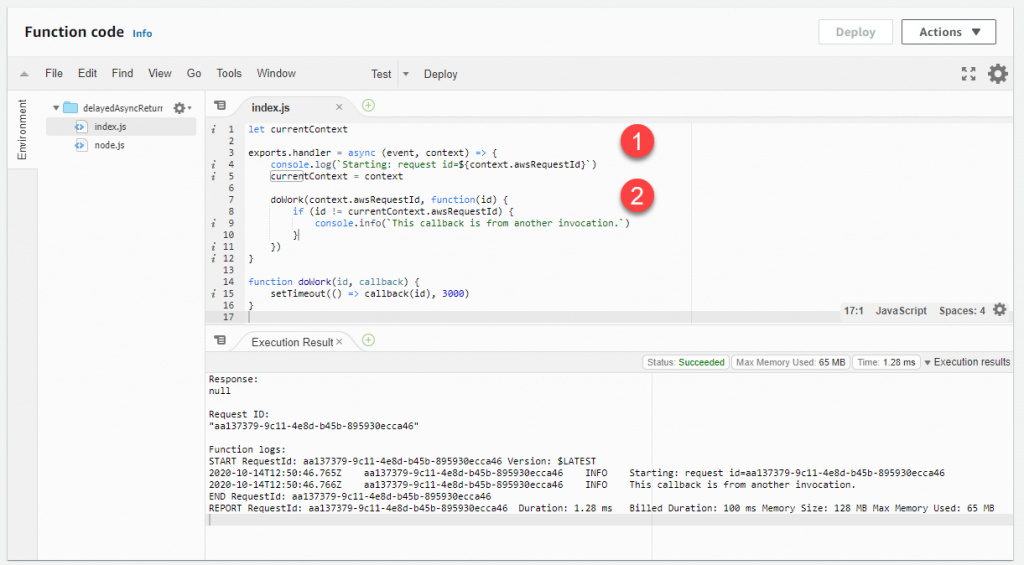 This is the second post in a series on debugging Lambda-based applications. This post shows how to identify and resolve memory and CPU-bound functions, and how to understand and use timeouts effectively in production applications.