Optimizing deep learning on P3 and P3dn with EFA

The Amazon EC2 P3dn.24xlarge instance is the latest addition to the Amazon EC2 P3 instance family, with upgrades to several components. This high-end size of the P3 family allows users to scale out to multiple nodes for distributed workloads more efficiently.  With these improvements to the instance, you can complete training jobs in a shorter amount of time and iterate on your Machine Learning (ML) models faster.

This blog reviews the significant upgrades with p3dn.24xlarge, walks you through deployment, and shows an example ML use case for these upgrades.

The most notable upgrade to the p3dn.24xlarge instance is the 100-Gbps network bandwidth and the new EFA network interface that allows for highly scalable internode communication. This means you can scale runs on applications to use thousands of GPUs, which reduces time to get results. EFA’s operating system bypasses networking mechanisms and the underlying Scalable Reliable Protocol that is built in to the Nitro Controllers. The Nitro controllers enable a low-latency, low-jitter channel for inter-instance communication. EFA has been adopted in the mainline Linux and integrated with LibFabric and various distributions. AWS worked with NVIDIA for EFA to support NVIDIA Collective Communication Library (NCCL). NCCL optimizes multi-GPU and multi-node communication primitives and helps achieve high throughput over NVLink interconnects.

The following diagram shows the PCIe/NVLink communication topology used by the p3.16xlarge and p3dn.24xlarge instance types. 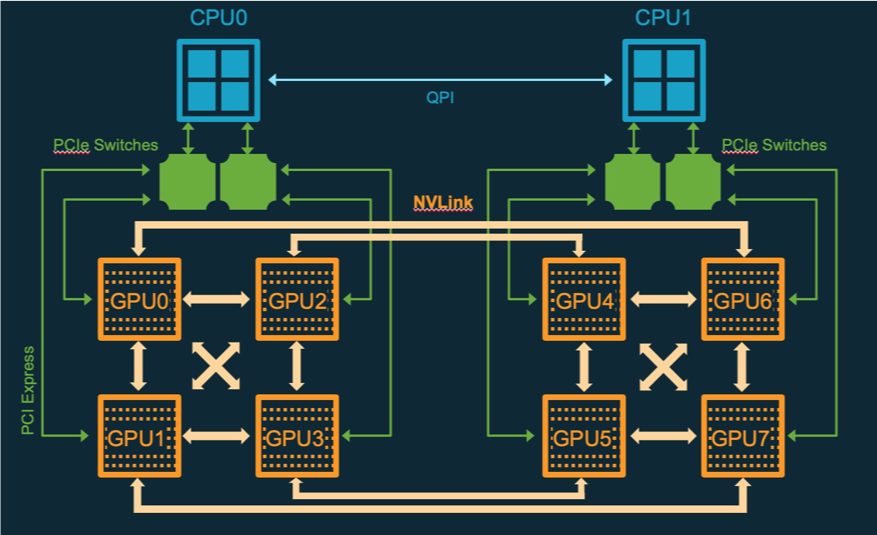 The following table summarizes the full set of differences between p3.16xlarge and p3dn.24xlarge.

Natural language processing (NLP) also presents large compute requirements for model training. This large compute requirement is especially present with the arrival of large Transformer-based models like BERT and GPT-2, which have up to a billion parameters. The following describes how to set up distributed model trainings with scalability for both image and language-based models, and also notes how the AWS P3 and P3dn instances perform.

First, optimize your P3 instances with an important environmental update. This update runs traditional TCP-based networking and is in the latest release of NCCL 2.4.8 as of this writing.

Two new environmental variables are available, which allow you to take advantage of multiple TCP sockets per thread: NCCL_SOCKET_NTHREADS and NCCL_NSOCKS_PERTHREAD.

The following graph shows the synthetic NCCL tests and their increased performance with the additional directives. 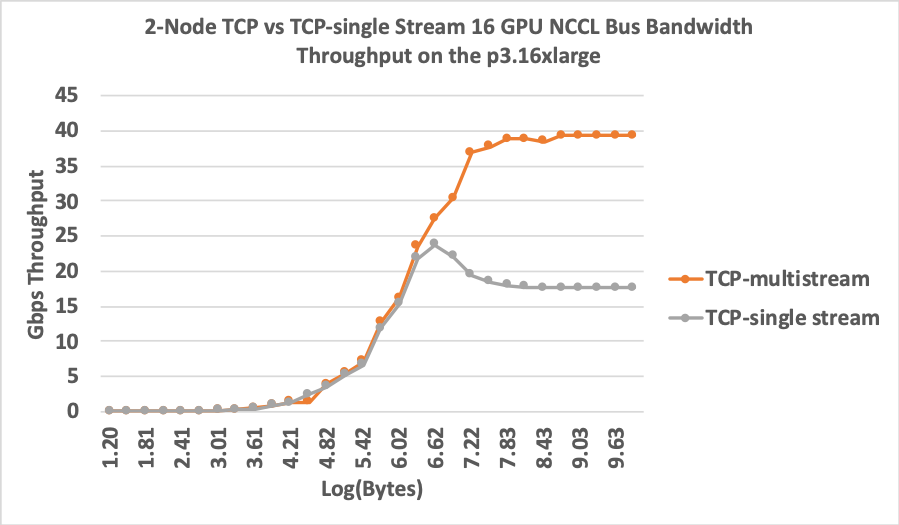 You can achieve a two-fold increase in throughput after a threshold in the synthetic payload size (around 1 MB).

The following steps walk you through spinning up a cluster of p3dn.24xlarge instances in a cluster placement group. This allows you to take advantage of all the new performance features within the P3 instance family. For more information, see Cluster Placement Groups in the Amazon EC2 User Guide.

This post deploys the following stack based on the Deep learning AMI version 20.2:

The latest DLAMI is ready to use with EFA and comes with the required drivers, kernel modules, libfabric, openmpi and the NCCL OFI plugin for GPU instances.

Supported CUDA Versions: NCCL Applications with EFA are only supported on CUDA-10.0 and CUDA-10.1 because the NCCL OFI plugin requires a NCCL version > 2.4.2.

Please refer to this documentation for steps on launching an AWS Deep Learning AMI Instance with EFA.

This blog includes the NCCL-tests GitHub as part of the deployment stack. This shows synthetic benchmarking of the communication layer over NCCL and the EFA network.

When launching the two-node cluster, complete the following steps:

This test makes sure that the node performance works the way it is supposed to. 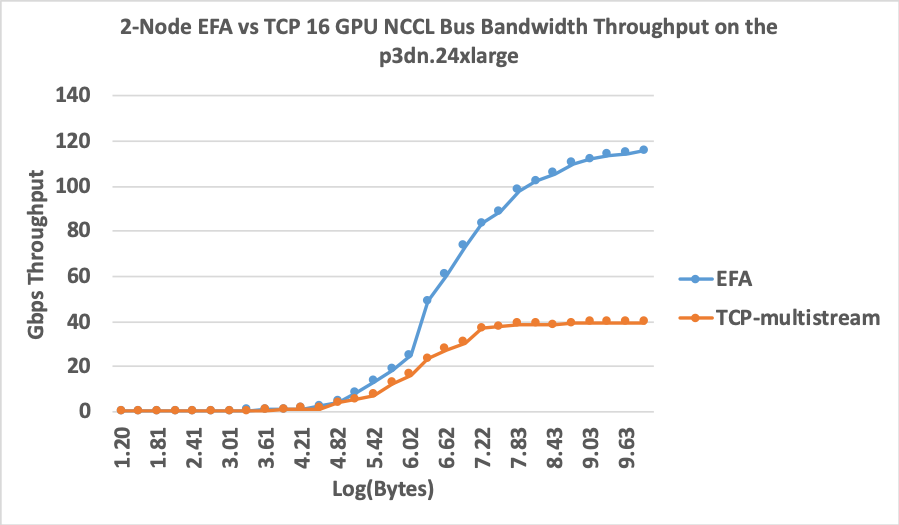 Now that you have run the two node tests, you can move on to a deep learning use case.

After you receive consistent 10 GB/s bus-bandwidth on the new P3dn instance, you are ready for FAIRSEQ distributed training.

To install fairseq from source and develop locally, complete the following steps:

Now that you have FAIRSEQ installed, you can run the training model. Complete the following steps:

Use the following scripts for distributed All Reduce FAIRSEQ Training :

Now that you have completed and validated your base infrastructure layer, you can add additional components to the stack for various workflows. The following charts show time-to-train improvement factors when scaling out to multiple GPUs for FARSEQ model training. 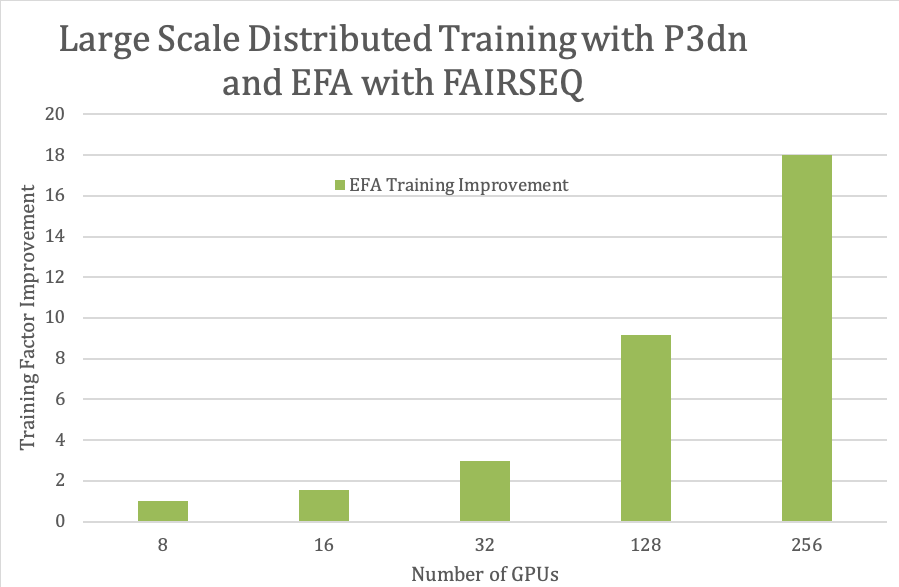 EFA on p3dn.24xlarge allows you to take advantage of additional performance at scale with no change in code. With this updated infrastructure, you can decrease cost and time to results by using more GPUs to scale out and get more done on complex workloads like natural language processing. This blog provides much of the undifferentiated heavy lifting with the DLAMI integrated with EFA. Go power up your ML workloads with EFA!