AWS Fargate is a new compute engine for containers that allows you to focus on running your application without needing to provision, monitor, or manage the underlying compute infrastructure. You package your application into a Docker container that you can then launch using your container orchestration tool of choice.

Despite offloading the responsibility for the underlying instances, Fargate still gives you deep control over configuration of network placement and policies. This includes the ability to use many networking fundamentals such as Amazon VPC and security groups.

This post covers how to take advantage of the different ways of networking your containers in Fargate when using ECS as your orchestration platform, with a focus on how to do networking securely.

The first step to running any application in Fargate is defining an ECS task for Fargate to launch. A task is a logical group of one or more Docker containers that are deployed with specified settings. When running a task in Fargate, there are two different forms of networking to consider:

One potential architecture for such an application is to deploy the web tier and the API tier together as a pair and use local networking so the web tier can fetch information from the API tier.

By making a networking request to this local interface, it bypasses the network interface hardware and instead the operating system just routes network calls from one process to the other directly. This gives the web tier a fast and efficient way to fetch information from the API tier with almost no networking latency.

In Fargate, when you launch multiple containers as part of a single task, they can also communicate with each other over the local loopback interface. Fargate uses a special container networking mode called awsvpc, which gives all the containers in a task a shared elastic network interface to use for communication.

If you specify a port mapping for each container in the task, then the containers can communicate with each other on that port. For example the following task definition could be used to deploy the web tier and the API tier:

ECS, with Fargate, is able to take this definition and launch two containers, each of which is bound to a specific static port on the elastic network interface for the task. 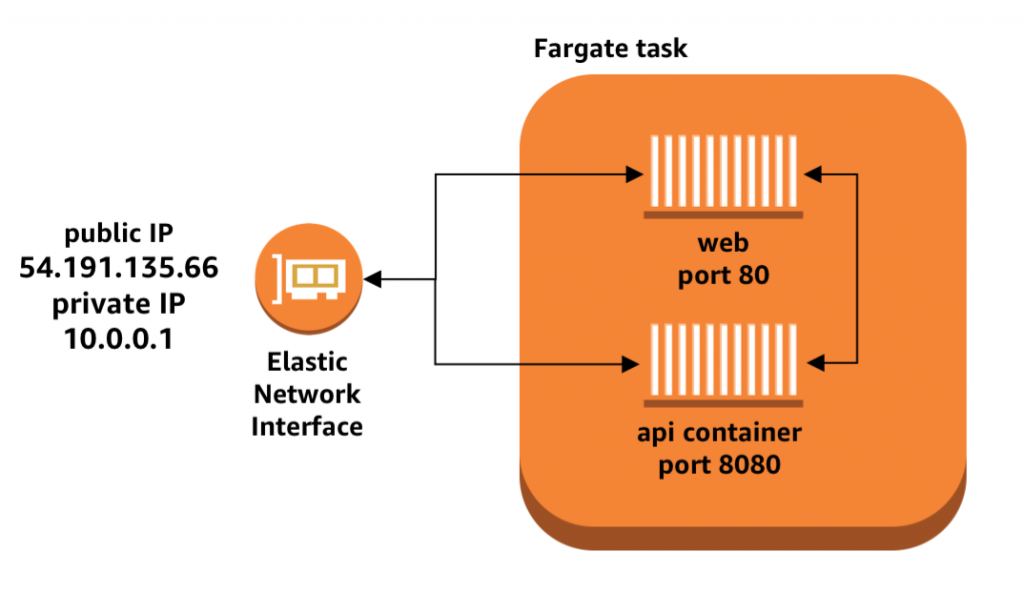 Because each Fargate task has its own isolated networking stack, there is no need for dynamic ports to avoid port conflicts between different tasks as in other networking modes. The static ports make it easy for containers to communicate with each other. For example, the web container makes a request to the API container using its well-known static port:

This sends a local network request, which goes directly from one container to the other over the local loopback interface without traversing the network. This deployment strategy allows for fast and efficient communication between two tightly coupled containers. But most application architectures require more than just internal local networking.

Configuring external networking for a task is done by modifying the settings of the VPC in which you launch your tasks. A VPC is a fundamental tool in AWS for controlling the networking capabilities of resources that you launch on your account.

When setting up a VPC, you create one or more subnets, which are logical groups that your resources can be placed into. Each subnet has an Availability Zone and its own route table, which defines rules about how network traffic operates for that subnet. There are two main types of subnets: public and private.

A public subnet is a subnet that has an associated internet gateway. Fargate tasks in that subnet are assigned both private and public IP addresses: 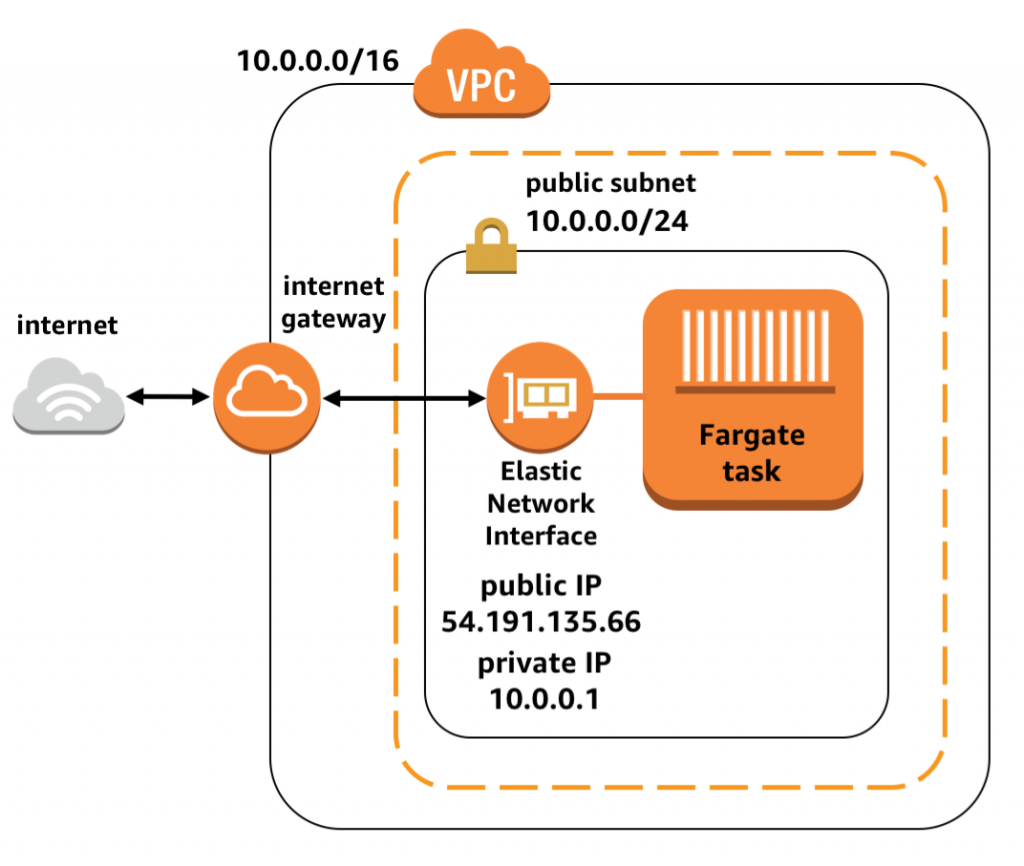 If tasks want to communicate directly with each other, they can use each other’s private IP address to send traffic directly from one to the other so that it stays inside the subnet without going out to the internet gateway and back in.

A private subnet does not have direct internet access. The Fargate tasks inside the subnet don’t have public IP addresses, only private IP addresses. Instead of an internet gateway, a network address translation (NAT) gateway is attached to the subnet:

There is no way for another server or client on the internet to reach your tasks directly, because they don’t even have an address or a direct route to reach them. This is a great way to add another layer of protection for internal tasks that handle sensitive data. Those tasks are protected and can’t receive any inbound traffic at all.

In this configuration, the tasks can still communicate to other servers on the internet via the NAT gateway. They would appear to have the IP address of the NAT gateway to the recipient of the communication. If you run a Fargate task in a private subnet, you must add this NAT gateway. Otherwise, Fargate can’t make a network request to Amazon ECR to download the container image, or communicate with Amazon CloudWatch to store container metrics.

If you are running a container that is hosting internet content in a private subnet, you need a way for traffic from the public to reach the container. This is generally accomplished by using a load balancer such as an Application Load Balancer or a Network Load Balancer. 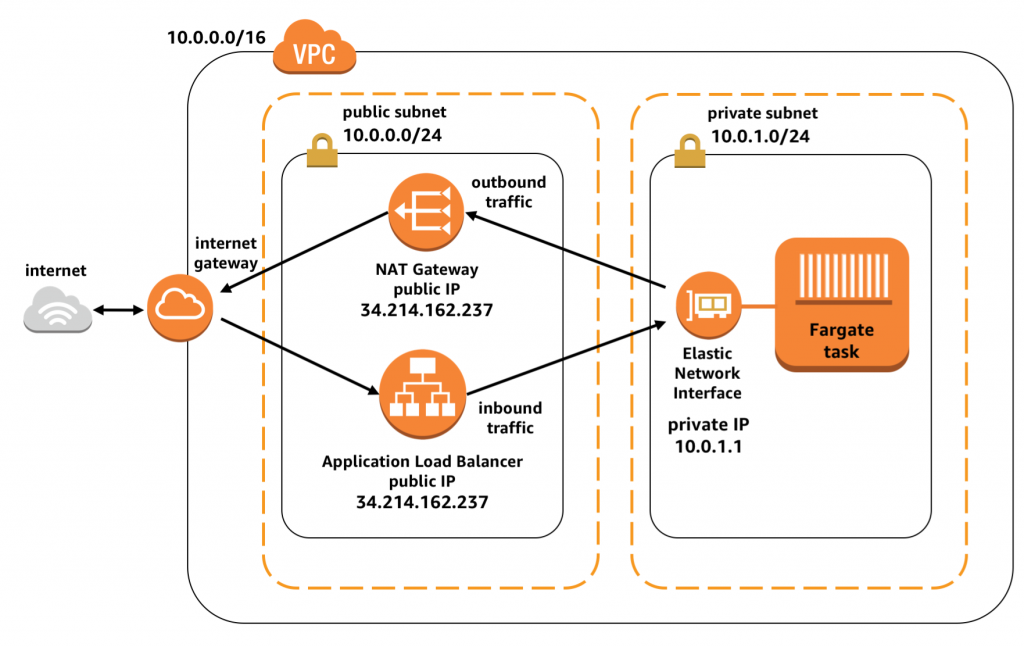 This configuration allows your tasks in Fargate to be safely isolated from the rest of the internet. They can still initiate network communication with external resources via the NAT gateway, and still receive traffic from the public via the Application Load Balancer that is in the public subnet.

Another potential use case for a load balancer is for internal communication from one service to another service within the private subnet. This is typically used for a microservice deployment, in which one service such as an internet user account service needs to communicate with an internal service such as a password service. Obviously, it is undesirable for the password service to be directly accessible on the internet, so using an internet load balancer would be a major security vulnerability. Instead, this can be accomplished by hosting an internal load balancer within the private subnet: 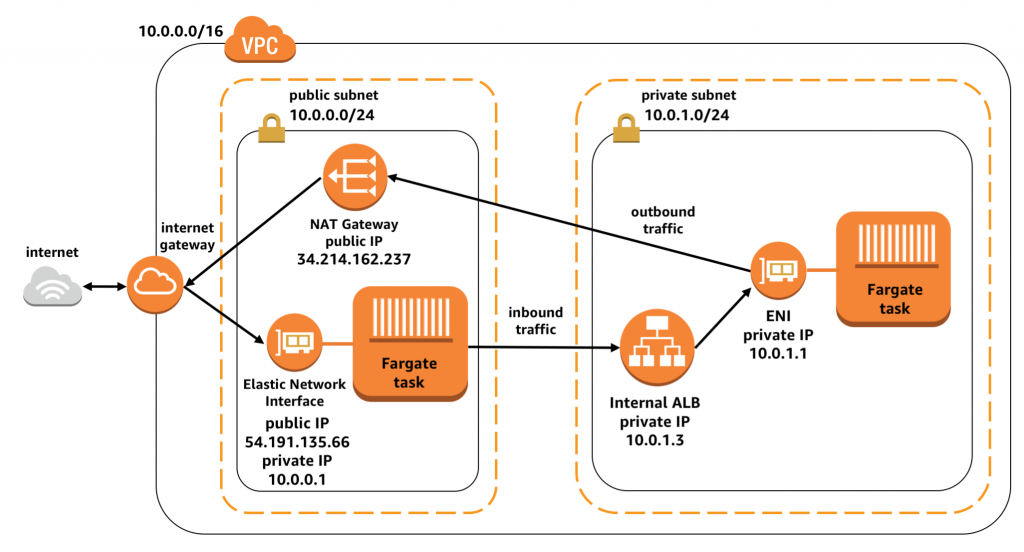 With this approach, one container can distribute requests across an Auto Scaling group of other private containers via the internal load balancer, ensuring that the network traffic stays safely protected within the private subnet.

Determine whether you should use local task networking

Local task networking is ideal for communicating between containers that are tightly coupled and require maximum networking performance between them. However, when you deploy one or more containers as part of the same task they are always deployed together so it removes the ability to independently scale different types of workload up and down.

If you run these tasks in a private subnet, then all their outbound traffic has to go through an NAT gateway. AWS NAT gateways support up to 10 Gbps of burst bandwidth. If your bandwidth requirements go over this, then all task networking starts to get throttled. To avoid this, you could distribute the tasks across multiple private subnets, each with their own NAT gateway. It can be easier to just place the tasks into a public subnet, if possible.

If you are running a service that handles private, internal information, you should not put it into a public subnet or use a public IP address. For example, imagine that you have one task, which is an API gateway for authentication and access control. You have another background worker task that handles sensitive information.

Fargate gives you a way to run containerized tasks directly without managing any EC2 instances, but you still have full control over how you want networking to work. You can set up containers to talk to each other over the local network interface for maximum speed and efficiency. For running workloads that require privacy and security, use a private subnet with public internet access locked down. Or, for simplicity with an internet workload, you can just use a public subnet and give your containers a public IP address.

To deploy one of these Fargate task networking approaches, check out some sample CloudFormation templates showing how to configure the VPC, subnets, and load balancers.