This post is written by Benjamin Meyer, Solutions Architect at AWS

With Amazon EC2 Mac instances, AWS customers can run macOS workloads on AWS and benefit from the scale, elasticity, reliability, and experience of AWS. With EC2 Mac instances, it’s possible to bootstrap macOS machines in the cloud and use these for building, testing, and deploying iOS applications in the cloud with the security, scalability, and flexibility of the cloud. Today, millions of developers rely on Apple’s industry-leading platforms and tools such as Xcode and Swift, and powerful frameworks like Core ML and Metal, to create apps for over a billion customers globally. Previously, customers did not have access to On-Demand Instance macOS environments in the cloud.

A common CI/CD automation tool for developers is Jenkins. Jenkins offers the ability to use build agents, to distribute CI/CD pipelines across machines or schedule parts of a pipeline to a specific instance type or container. In this blog, you learn how to add an Amazon EC2 Mac instance as a build agent to an existing Jenkins server. Additionally, the blog illustrates how to use Fastlane with a declarative Jenkins pipeline on the macOS build agent to build and test your iOS and macOS applications. While this blog post shows how to use an Amazon EC2 Mac instance with Jenkins, it can be done with different CI/CD applications such as GitLab runners.

The following diagram gives an overview of the architecture this blog post builds up. 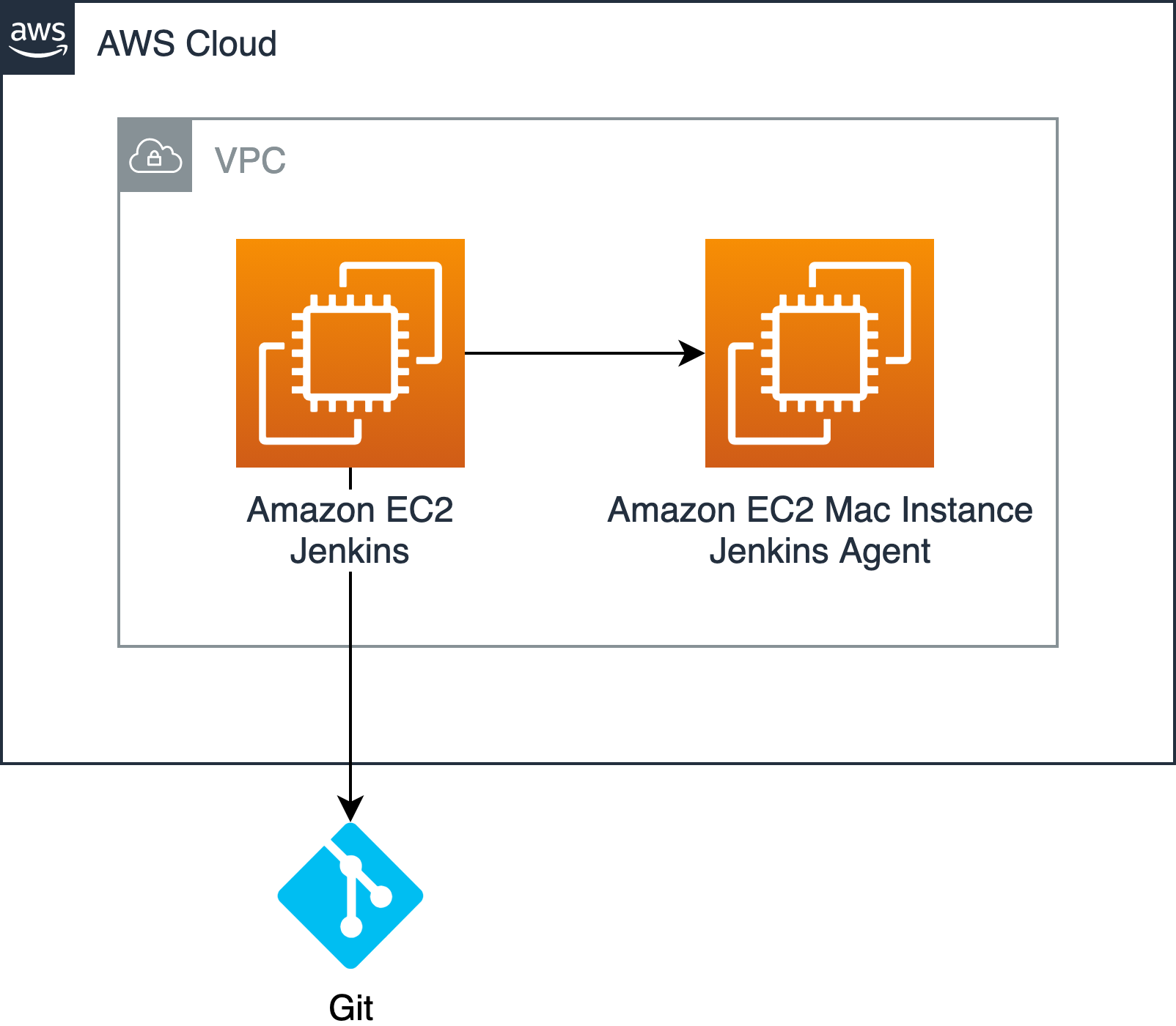 A prerequisite for this walkthrough is that you have an existing Jenkins set up within a Amazon Virtual Private Cloud (VPC) to build projects. If you want to follow along and don’t have Jenkins, you can do the Jenkins on AWS tutorial from the jenkins documentation.

The following steps review what is covered in the blog post:

Now that you understand the steps covered in this blog post, let’s get started.

1. Ensure you are in a Region where the Amazon EC2 Mac instance is available 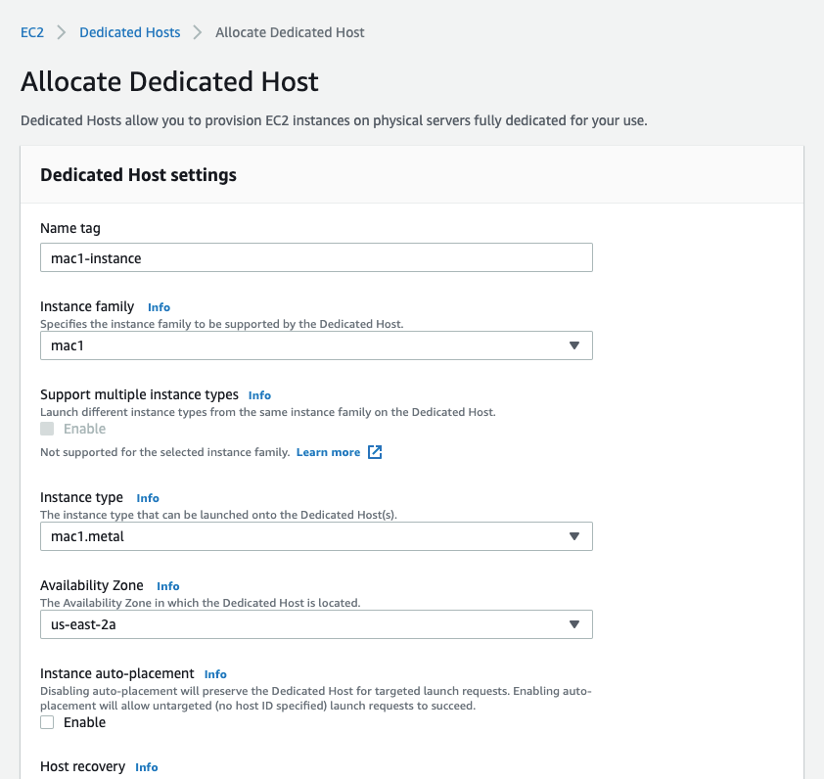 This allocates a Dedicated Host where the Amazon EC2 Mac instance is scheduled on.

When the mac1 instance boots up the first time, the ec2-macos-init tool runs the script you added to the user data. In the user data, Openjdk 8 for the Jenkins agent is installed and a Jenkins user is created. To allow the Jenkins leader node to access the agent as Jenkins user through SSH, the script adds the same SSH key from the ec2-user to the jenkins user. This is important so that the user that runs the Jenkins pipelines can’t delete system relevant files. Lastly, it resizes the boot volume to the Amazon EBS size and starts the ARDAgent. This allows you to connect with a VNC Client to the instance. For more information on the volume resizing, the ARDAgent, or the ec2-macos-init, see Amazon EC2 Mac instance.

Before explaining how to add this instance as a build agent, Xcode must be installed on the instance. As the installation requires logging in to the Apple AppStore, follow the instructions of Connect to your instance using Apple Remote Desktop. Then download and install Xcode manually using the User Interface. Make sure to open Xcode once to accept the Xcode and iOS SDK License Agreement. 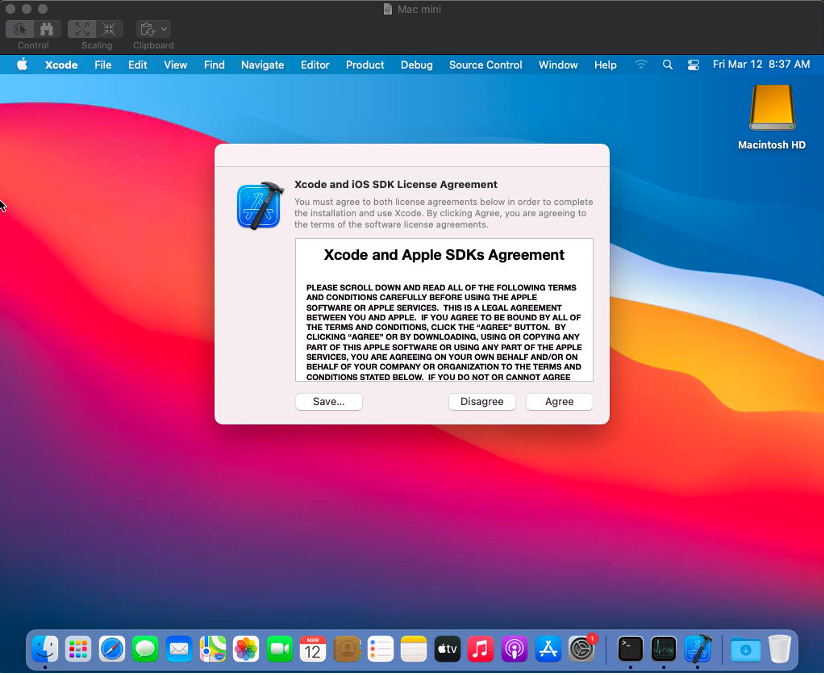 At the end of this section, you should have an Amazon EC2 Mac Instance which is set up to build iOS projects. Now, you can add this instance as a build agent to your Jenkins. 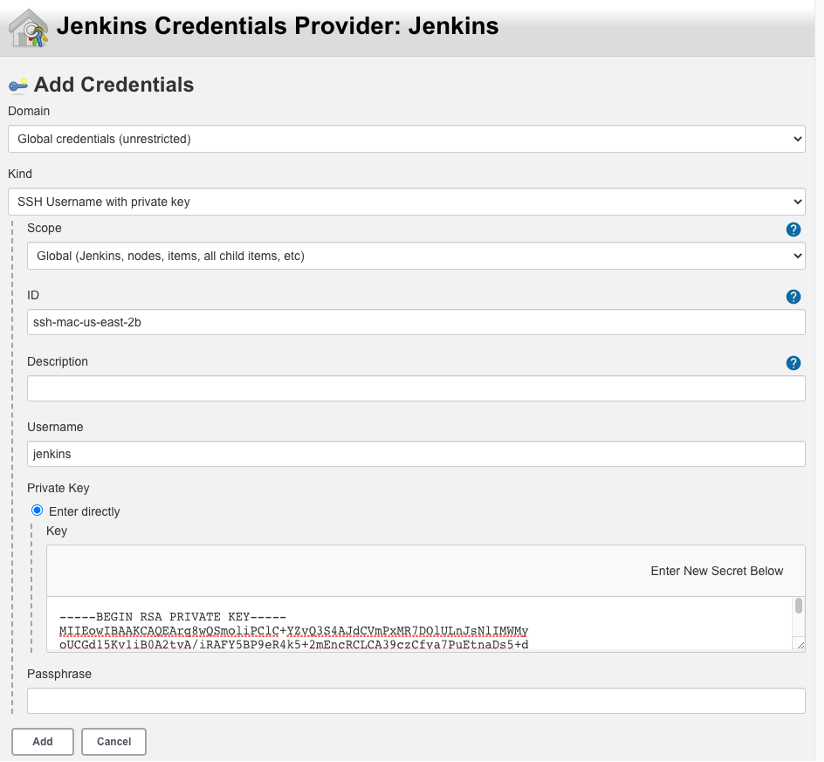 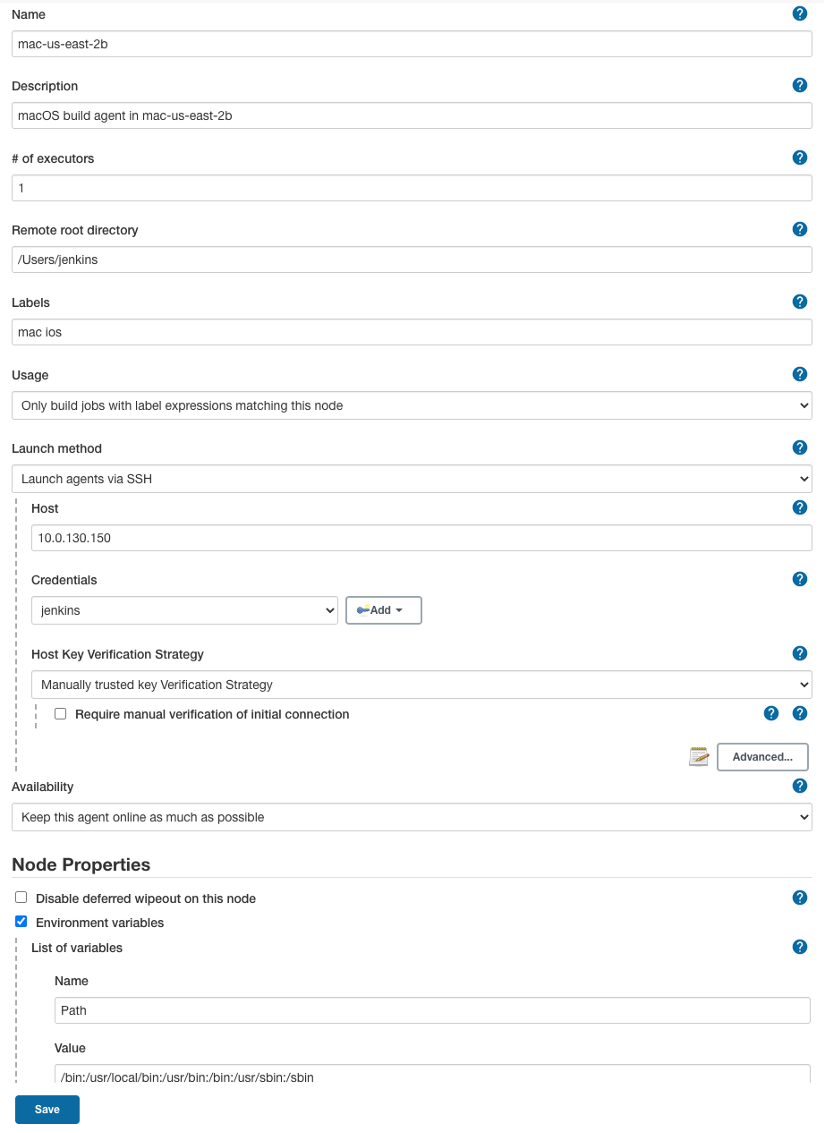 After this, the Jenkins leader node SSH to the agent and verifies that a compatible java runtime is installed. If everything is fine, it installs the agent jar and starts it on the build agent and the agent is shown healthy in the Jenkins UI. These steps can be verified by opening the agent and looking into the logs of it. Right after saving:

How to run a Fastlane pipeline on the macOS Build Agent

Fastlane is an open-source platform aimed at simplifying Android and iOS deployment. Fastlane is written in Ruby and provides fastlane actions to automate every aspect of the development and release workflow of mobile applications.

To finally build the first iOS application on the macOS agent, open the Jenkins UI and log in: 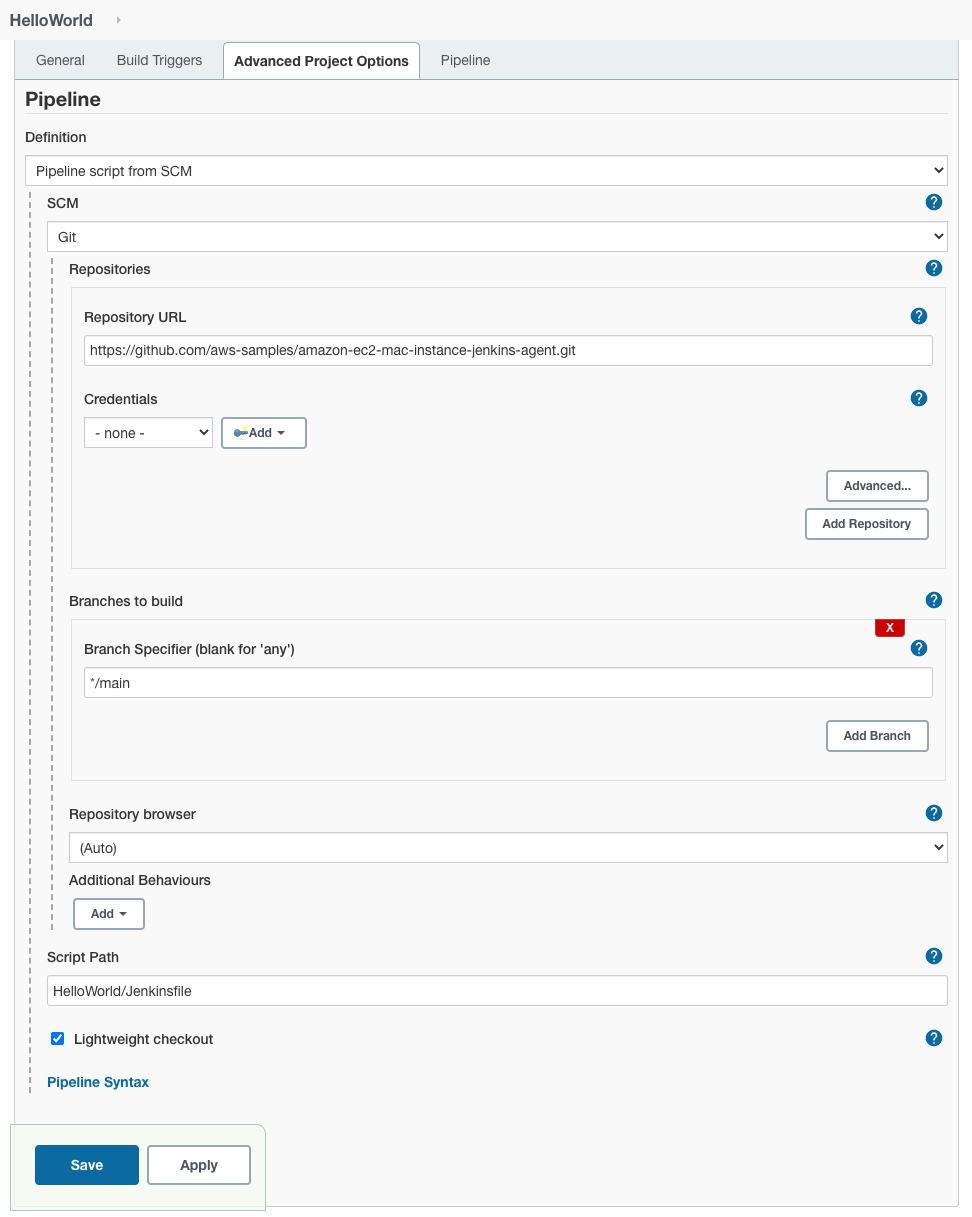 Now that the Jenkins job is set up and ran the first time, let’s take a look at what happens. Inside of the HelloWorld folder is a Jenkinsfile with a declarative Jenkins pipeline. This pipeline has two stages. In the first stage it uses bundler to install Fastlane into the local folder and in the second stage it runs all tests of the project using a Fastlane lane. The definition of the run lane is found in the Fastlane folder inside of the HelloWorld project and looks like this: 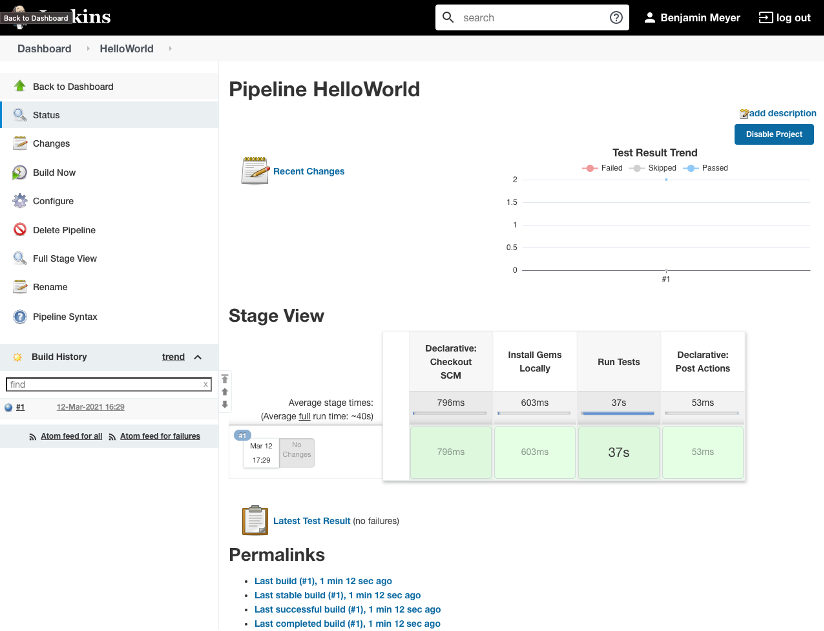 The same mechanism can be used to execute any other lane, for example, to deploy the app to TestFlight right from that EC2 Mac Instance using Fastlanes testflight action.

In this blog, you learned how to bootstrap an Amazon EC2 Mac Instance with the required tools to have a Jenkins leader node start a build agent on it. I also covered how to manually add this instance to an existing Jenkins and run tests of an iOS demo application using Jenkins declarative pipelines and Fastlane.

If you want to dive deeper on how to build, test, and distribute mobile iOS applications, we recommend you read through the documentation of Fastlane on iOS Beta deployment using Fastlane and especially read the A new approach to code signing from Fastlane to simplify the codesigning before deploying an application to the AppStore.