In this post, we demonstrate how customers can implement a canary deployment strategy for applications running on Amazon Elastic Container Service (Amazon ECS) in conjunction with AWS App Mesh. If you are looking to do canary deployments with AWS CodeDeploy using ALB’s weighted target groups, please refer to this post.

By making use of container orchestrators such as Amazon ECS and Amazon EKS, customers across the globe are able to run complex applications at scale. However, when leveraging the power of these tools, customers still need to think about managing the connectivity, operations, and security between microservices in these distributed architectures to run highly decentralized groups of services.

AWS App Mesh is a service mesh that provides application-level networking to make it easy for your services to communicate with each other across multiple types of compute infrastructure. It also provides end-to-end visibility, and helps ensure high availability for your applications. App Mesh gives you consistent visibility and network traffic controls for every service in an application.

With canary deployments/releases, you switch the traffic in user defined percentage increments as per business needs after deploying a new version of a given application. It can also monitor the health of the new version, so if there is an issue, your canary deployment can automatically switch the traffic back to the old version, thereby decreasing the impact of the bug(s) introduced in the new application version on the end customers. This approach not only helps with brand new implementations, but also addresses the need for testing around complex and distributed microservices where you can send a percentage of traffic to newer versions in a controlled manner:

The architecture diagram below represents an overview of the AWS services that will be used to create the pipeline: 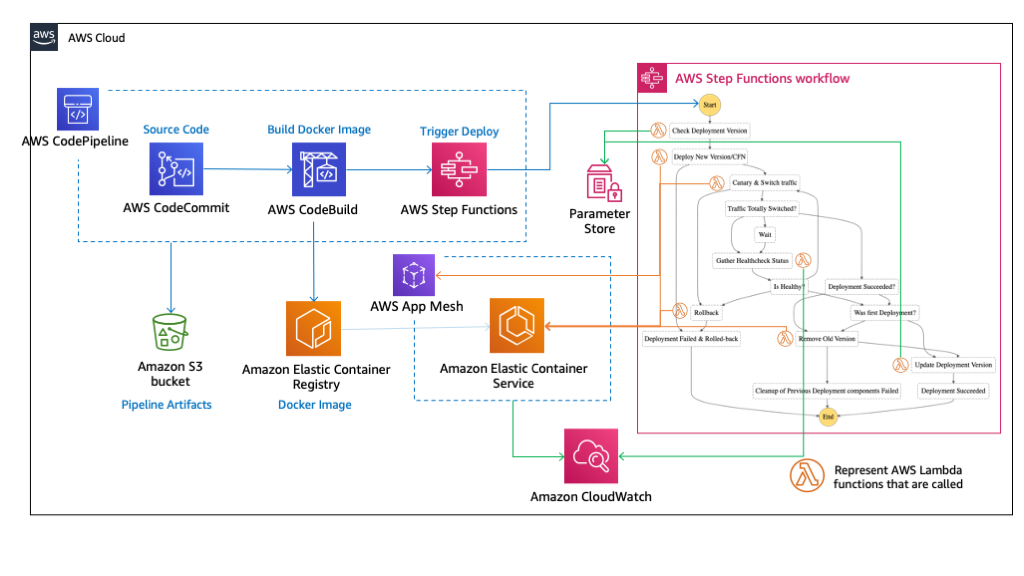 To demonstrate this architecture, we will be using an application called Yelb. Yelb allows users to vote on a set of alternatives like restaurants and dynamically updates pie charts based on the votes. Additionally, Yelb keeps track of the number of page views and prints the hostname of the yelb-appserver instance that is represented (in AWSVPC networking mode on Amazon ECS) by the IP address of the task serving the API request upon a vote or a page refresh. Yelb components include: 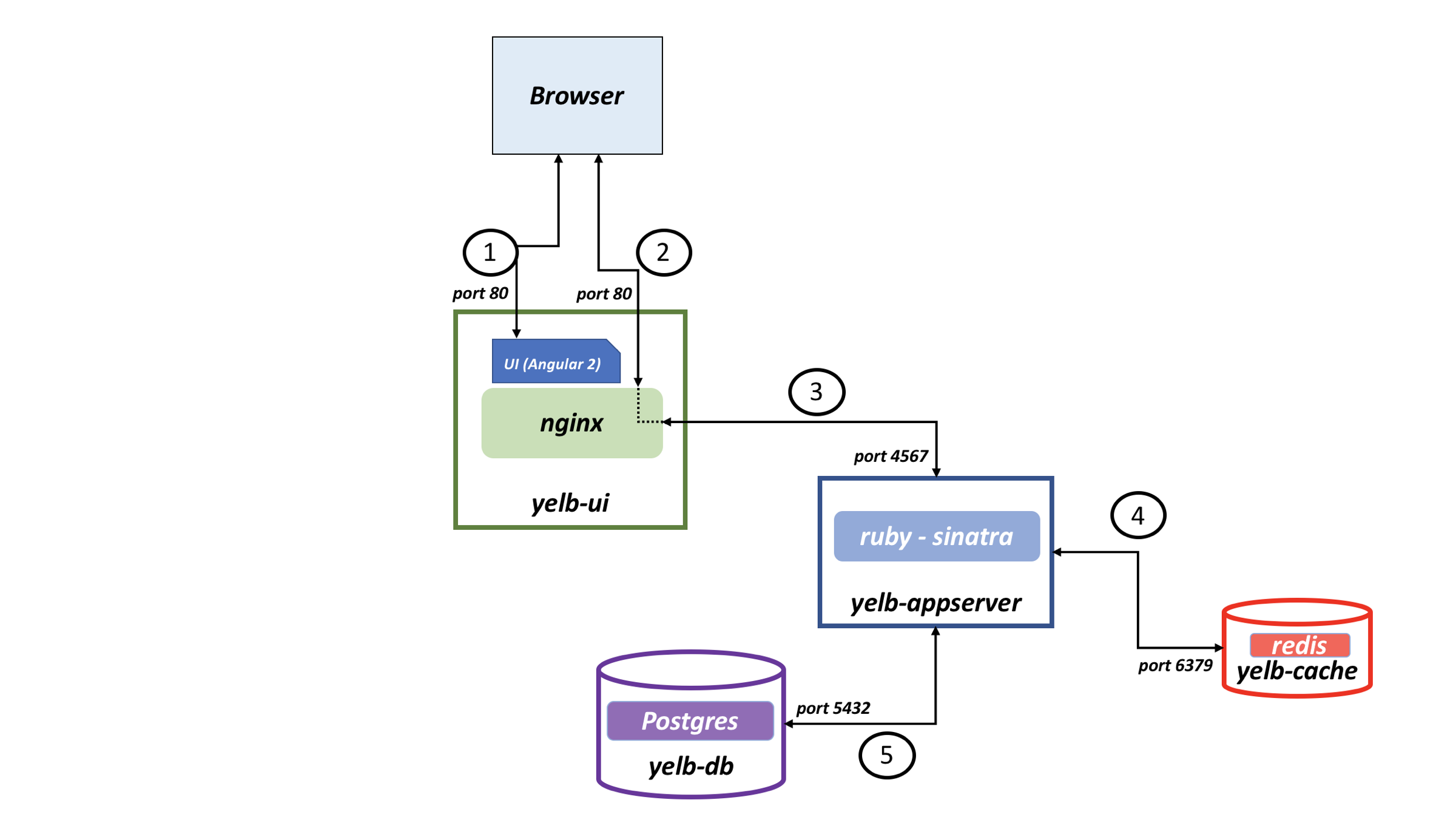 Yelb configuration uses ephemeral disks for all the containers. Running databases in this way is only done for demonstration purposes.

3. Set up the infrastructure

During the next steps of the post, we will be using the AWS Oregon (us-west-2) Region.

To follow along, you will need to have an environment with the required tooling. We have used an AWS Cloud9 instance to run this tutorial. If you want to create a Cloud9 instance in your account, follow the steps in the Amazon ECS Workshop chapter “Create a Workspace” from the beginning until the step “Validate the IAM role“.

There are some requirements to be installed and configured before you can create the pipeline. Start by cloning the GitHub repository:

Now, let’s start by exporting some environment variables (feel free to customize these variables to your needs):

Note: The above command will execute the shell script under the location /setup/scripts/export_environment_variables.sh

You will also need an Amazon Virtual Private Cloud (VPC) to provision a logically isolated section of the AWS Cloud where you can launch AWS resources in a virtual network that you define. You have complete control over your virtual networking environment, including the selection of your own IP address range, creation of subnets, and configuration of route tables and network gateways.

Note: The above command will execute the shell script under the location /setup/scripts/create_vpc.sh

Amazon Elastic Container Service (Amazon ECS) is a highly scalable, fast container management service that makes it easy to run, stop, and manage containers on a cluster. We will now create an empty Amazon ECS cluster with the prerequisites to standup ECS services and an AWS App Mesh mesh that will be used by the microservices to perform canary deployments.

Note: The above command will execute the shell script under the location /setup/scripts/create_ecs_mesh.sh

Note: The above command will execute the shell script under the location /setup/scripts/create_prometheus_env.sh

Now that you have all the requirements installed and configured, you can move forward with the creation of the pipeline per microservice, powered by AWS CodePipeline.

The shared AWS CloudFormation stack contains multiple AWS Lambda functions and one AWS Step Functions state machine that will be responsible for the deploy stage of the pipeline. As it accepts all configuration parameters as input, you can use the same resources for all deployments. 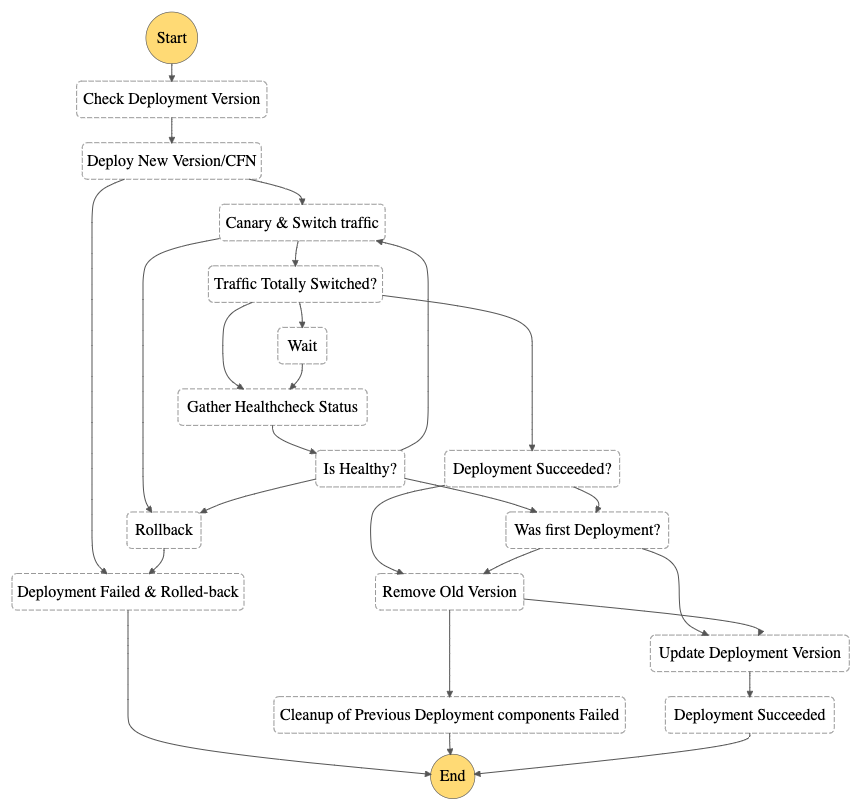 Note: The above command will execute the shell script under the location /setup/scripts/create_shared_cloudformation_stack.sh

The pipeline AWS CloudFormation stack was designed to be deployed for each microservice you have. It will create one AWS CodeCommit repository and the pipeline that will be triggered by new commits into the master branch of that repository.

For demonstration purposes, you will create four stacks with the Yelb microservices. You can change the environment variable called USE_SAMPLE_MICROSERVICES to 'False' and it will create all the needed resources for the pipeline with an empty AWS Code Commit repository to be used with your own source code.

Because the Yelb architecture contains four microservices, we have created a script that will create all the needed AWS CloudFormation stacks:

Note: The above command will execute the shell script under the location /setup/scripts/create_sample_microservice_pipeline_stack.sh

Only move to the next step if the last command has returned All CloudFormation stacks created successfully!.

Now that you have completely created the architecture, you can start to see how it works.

First, let’s take a look into the AWS CodeCommit repositories where you will find a microservice specific code repository, under which you will find a folder called specfiles with 3 files in it. Let’s dive into those three files:

Note: Sample values could be are 10, 25, 50 etc. For example, if the percentage is set to 25, the state machine workflow will shift 25% of traffic in increments from old version to the new version until the percentage reaches 100%.

The following is a sample layout of directory structure of a microservice repository. Everything else inside of the AWS CodeCommit repositories is source code from the respective Yelb applications. 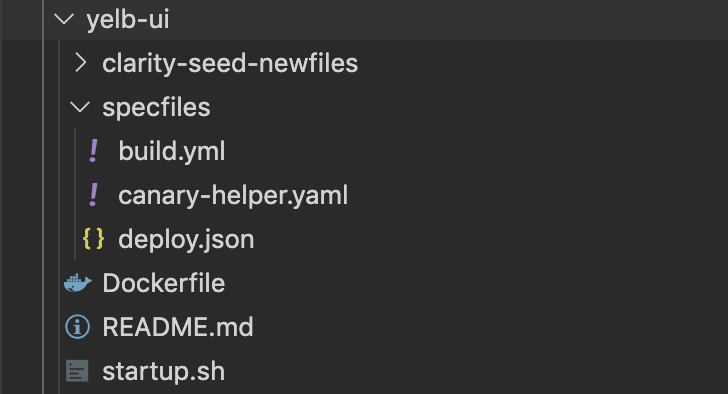 The easiest way to look into the resources created is to open AWS CodePipeline. There you will see the four pipelines you created earlier:

You can open one of them and see the steps Source, Build, and Deploy. These steps are all customizable. You could add before deploying, for example, security checks or manual approvals. 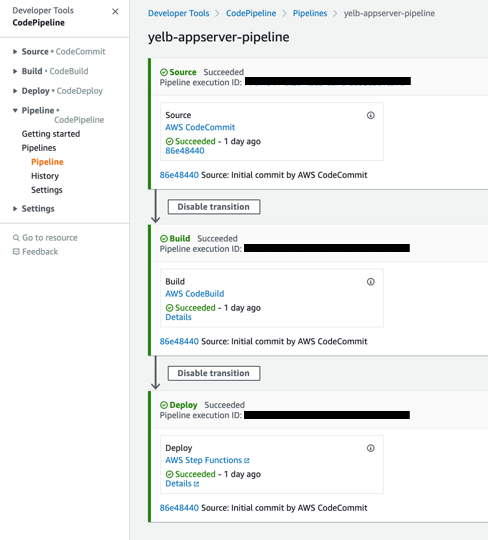 2. The Build step builds the Docker image with AWS CodeBuild and stores it in Amazon ECR. You can see the build logs by clicking in the Details link from the build step.

3. The Deploy step triggers the AWS Step Functions state machine created by the shared AWS CloudFormation stack. You see its status by clicking on the Details link.

Click on the Details tab from the Deploy step and you can check the input and output of the execution and for each step as well as the AWS Lambda functions and the execution logs: 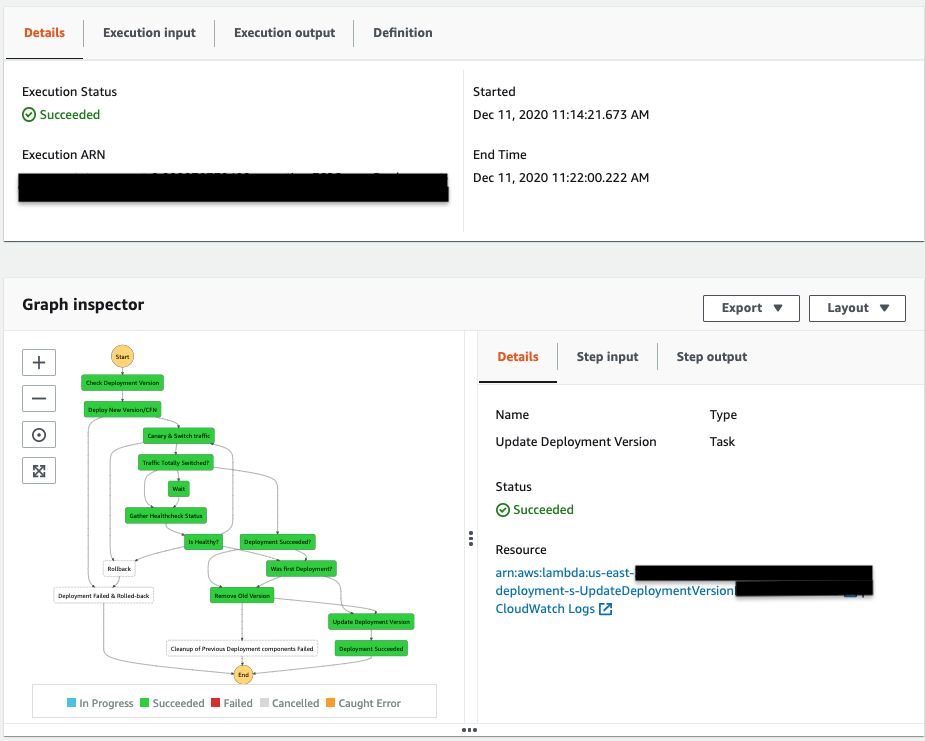 A successful deployment that switched 100% of the traffic to the new version and passed all health checks looks similar to following images: 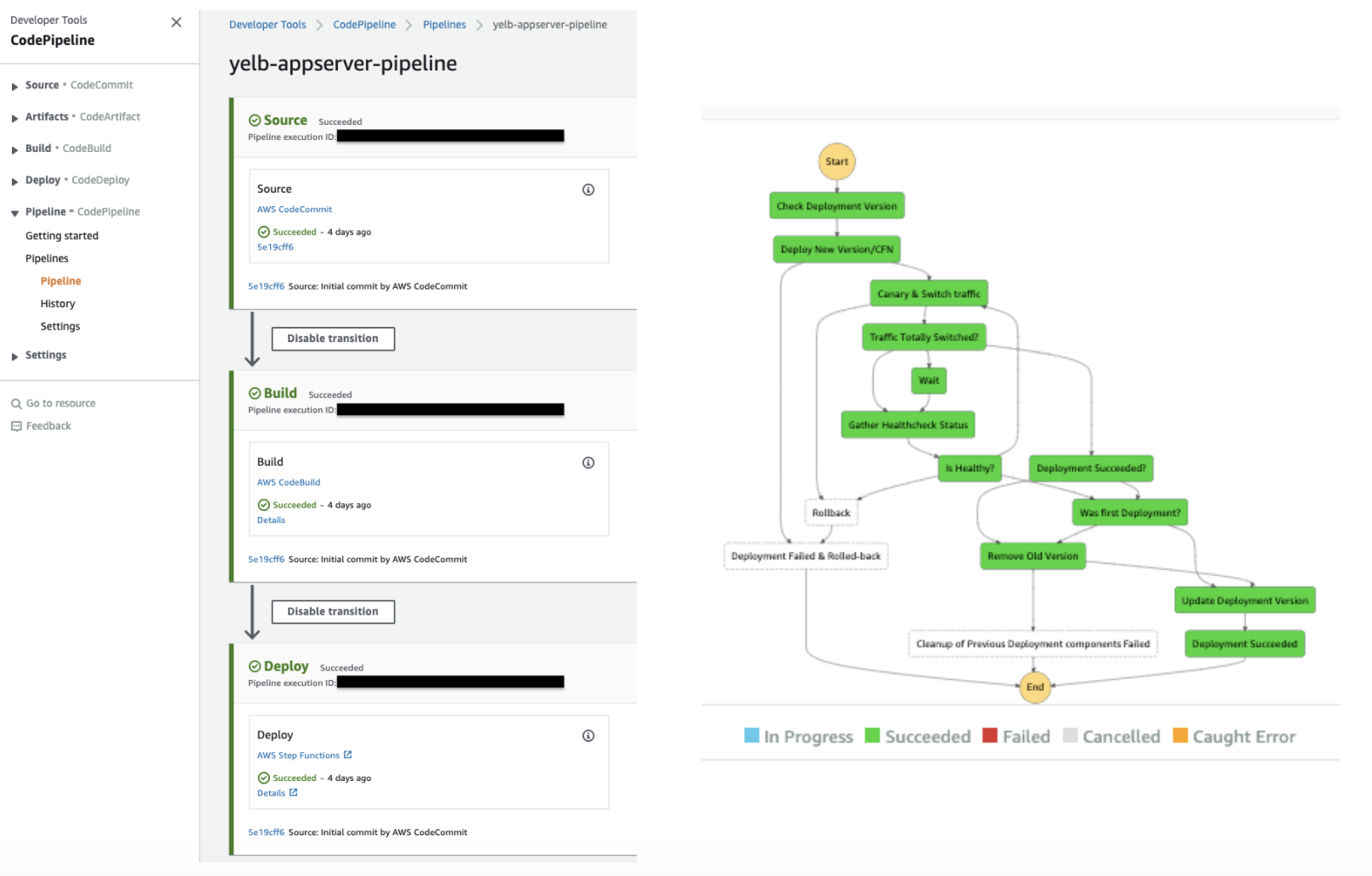 Looking into the ECS/ContainerInsights/Prometheus CloudWatch metrics namespace, you should not see any 5xx response code for the new version (yelb-appserver-<gitsha>):

Now, let’s see the Yelb application working and make some changes to see how the pipeline behaves.

Open the URL returned by the command above in your preferred browser. You should see a page similar to the following (it might take some minutes for the DNS name to propagate): 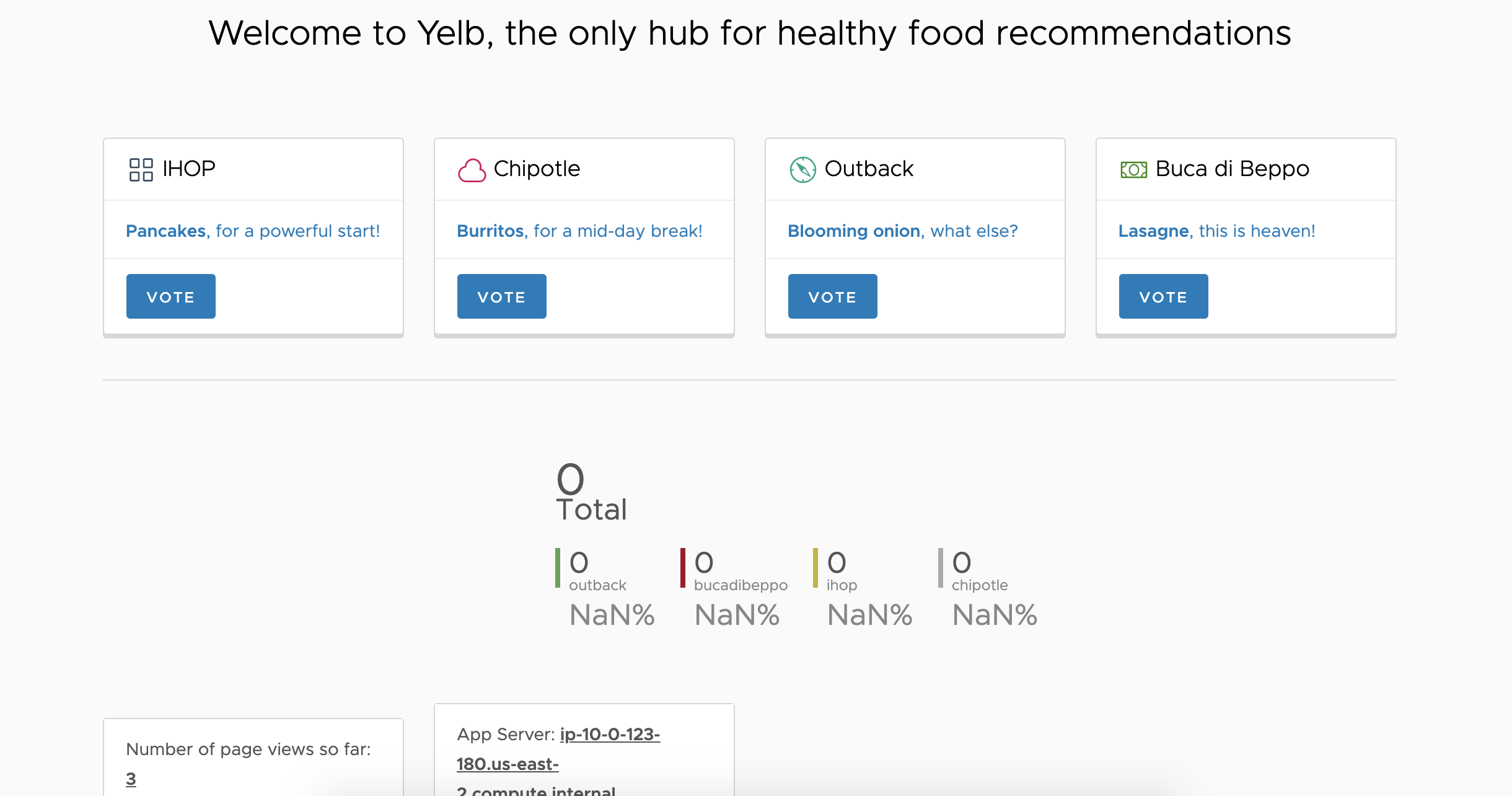 Click in some vote buttons and see how the values are updated. Did you notice something wrong while voting?

We intentionally added an issue to the yelb-appserver microservice so that it increments by two each time there is one vote. Now, let’s fix that issue and see how it gets applied.

Open AWS CodeCommit and navigate to the yelb-appserver repository, open the file modules/restaurantsdbupdate.rb and click on the Edit button to fix the issue. Change the line:

Go to AWS CodePipeline in the AWS Management Console and after some seconds you will see that yelb-appserver-pipeline is In progress. Open it to see the progress of the deployment. Wait until it gets to the Deploy stage and then refresh the browser tab with the Yelb application a few times. You will see that the App Server hostname (as shown in the image below) will be switching between two names, that is the canary deployment taking place. 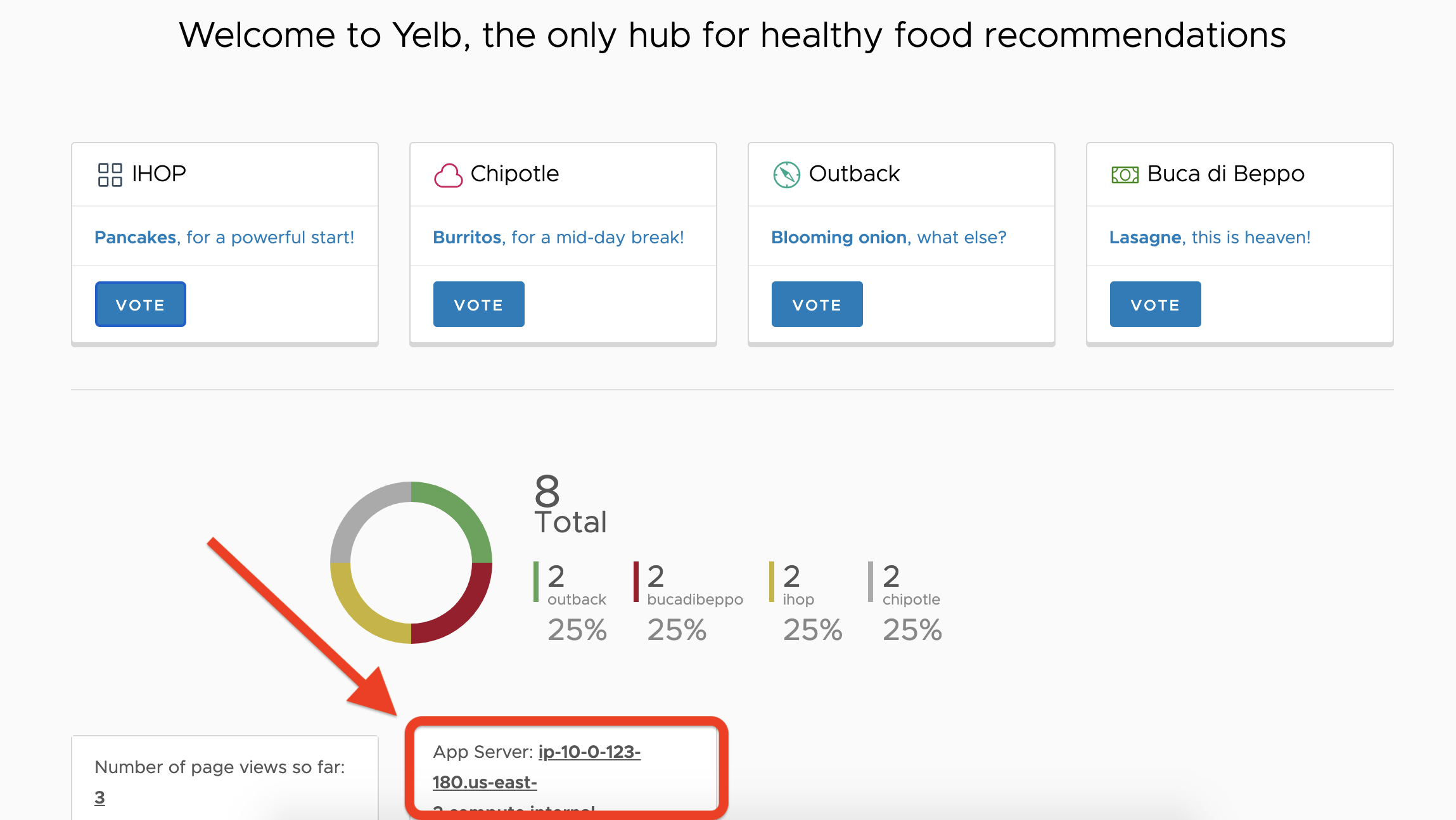 Open the AWS App Mesh virtual router for the yelb-appserver microservice and you will be able to see how are the weights at this moment. You can also open the deploy.json file in the yelb-appserver AWS CodeCommit repository to see the percentage_step and wait_time parameters to know how long it will take to switch all the traffic. For this example, the values percentage_step: 10 and wait_time: 60 were used and it will take a total of 10 minutes to switch all the traffic.

After the deployment completes, you can try to vote on the Yelb application again and see that now it increments by one.

5.4 Deploy a version that triggers rollback

Open the yelb-appserver.rb file from the yelb-appserver AWS CodeCommit repository. Change the port for the application under the production configuration (line 33) from 4567 to 4568 (or any port number other than 4567) and commit the changes.

Try to refresh the Yelb application a few times. You will see that sometimes when you refresh there is no vote data returned and you are not able to vote. That’s because you are being redirected to the new version that is not working.

Wait a few minutes and you will see in the visual workflow that a rollback was triggered because the new version did not pass the health check. It’s important to note that the health check is a AWS Lambda function that can be customized if needed. 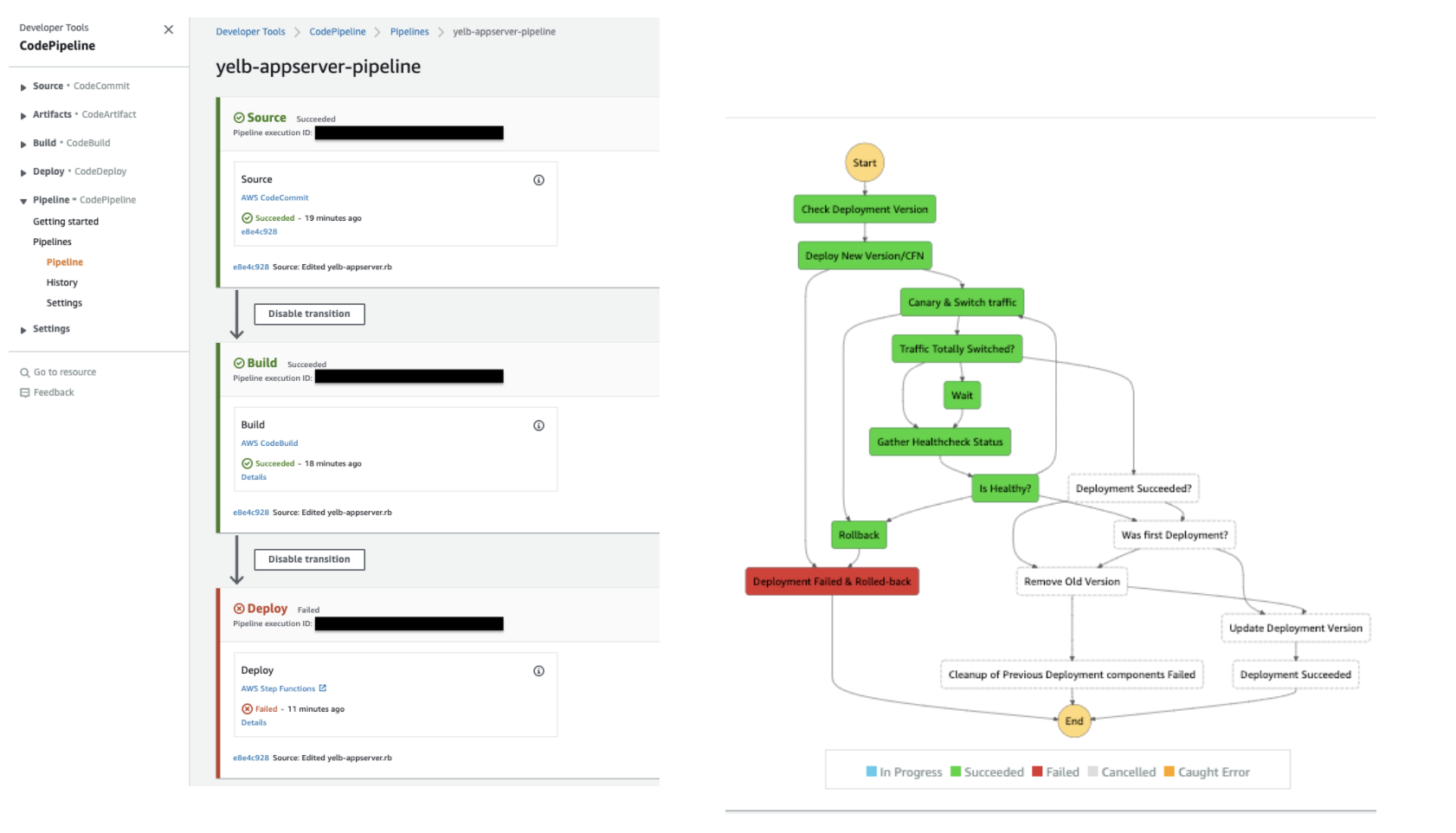 You can now refresh the Yelb application a few times again and it will work properly using previous version.

You can use the command below to delete the resources created during the previous steps.

Note: The above command will execute the shell script under the location /setup/scripts/delete_blog_contents.py

In this post, we demonstrated how you can leverage AWS App Mesh and implement a canary deployment strategy in conjunction with other AWS services such as AWS Code Pipeline and AWS Step Functions.

Further, here are some useful links if you want to dive deeper into AWS App Mesh:

You can track upcoming features via the App Mesh roadmap and experiment with new features using the App Mesh preview channel. You can also join us in the App Mesh Slack community to share experiences and discuss with the team and your peers.