How to build container images with Amazon EKS on Fargate

This post was contributed by Re Alvarez Parmar and Olly Pomeroy

Containers help developers simplify the way they package, distribute, and deploy their applications. Developers package their code into a container image that includes the application code, libraries, and any other dependencies. This image can be used to deploy the containerized application on any compatible operating system. Since its launch in 2013, Docker has made it easy to run containers, build images, and push them to repositories.

However, building containers using Docker in environments like Amazon ECS and Amazon EKS requires running Docker in Docker, which has profound implications. Perhaps the least attractive prerequisite for using Docker to build container images in containerized environments is the requirement to run containers in privileged mode, a practice most security-conscious developers would like to avoid. Using Docker to build an image on your laptop may not have severe security implications. Still, it is best to avoid giving containers elevated privileges in a Kubernetes cluster. This hard requirement also makes it impossible to use Docker with EKS on Fargate to build container images because Fargate doesn’t permit privileged containers.

Using kaniko to build your containers and Jenkins to orchestrate build pipelines, you can operate your entire CD infrastructure without any EC2 instances.

How can Fargate help with your self-managed CD infrastructure?

CD workloads are bursty. During business hours, developers check-in their code changes, which triggers CD pipelines, and the demand on the CD system increases. If adequate compute capacity is unavailable, the pipelines compete for resources, and developers have to wait longer to know the effects of their changes. The result is a decline in developer productivity. During off hours, the infrastructure needs to scale back down to the reduce expenses.

Optimizing infrastructure capacity for performance and cost at the same time is challenging for DevOps engineers. On top of that, DevOps teams running self-managed CD infrastructure on Kubernetes are also responsible for managing, scaling, and upgrading their worker nodes.

Teams using Fargate have more time for solving business challenges because they spend less time maintaining servers. Running your CD infrastructure on EKS on Fargate reduces your DevOps team’s operational burden. Besides the obvious benefit of not having to create and manage servers or AMIs, Fargate makes it easy for DevOps teams to operate CD workloads in Kubernetes in these ways:

Pay per pod
In Fargate, you pay for the CPU and memory you reserve for your pods. This can help you reduce your AWS bill since you don’t have to pay for any idle capacity you’d usually have when using EC2 instances to execute CI pipelines. You can further reduce your Fargate costs by getting a Compute Savings Plan.

We will create an EKS cluster that will host our Jenkins cluster. Jenkins will run on Fargate, and we’ll use Amazon EFS to persist Jenkins configuration. A Network Load Balancer will distribute traffic to Jenkins. Once Jenkins is operational, we’ll create a pipeline to build container images on Fargate using kaniko. 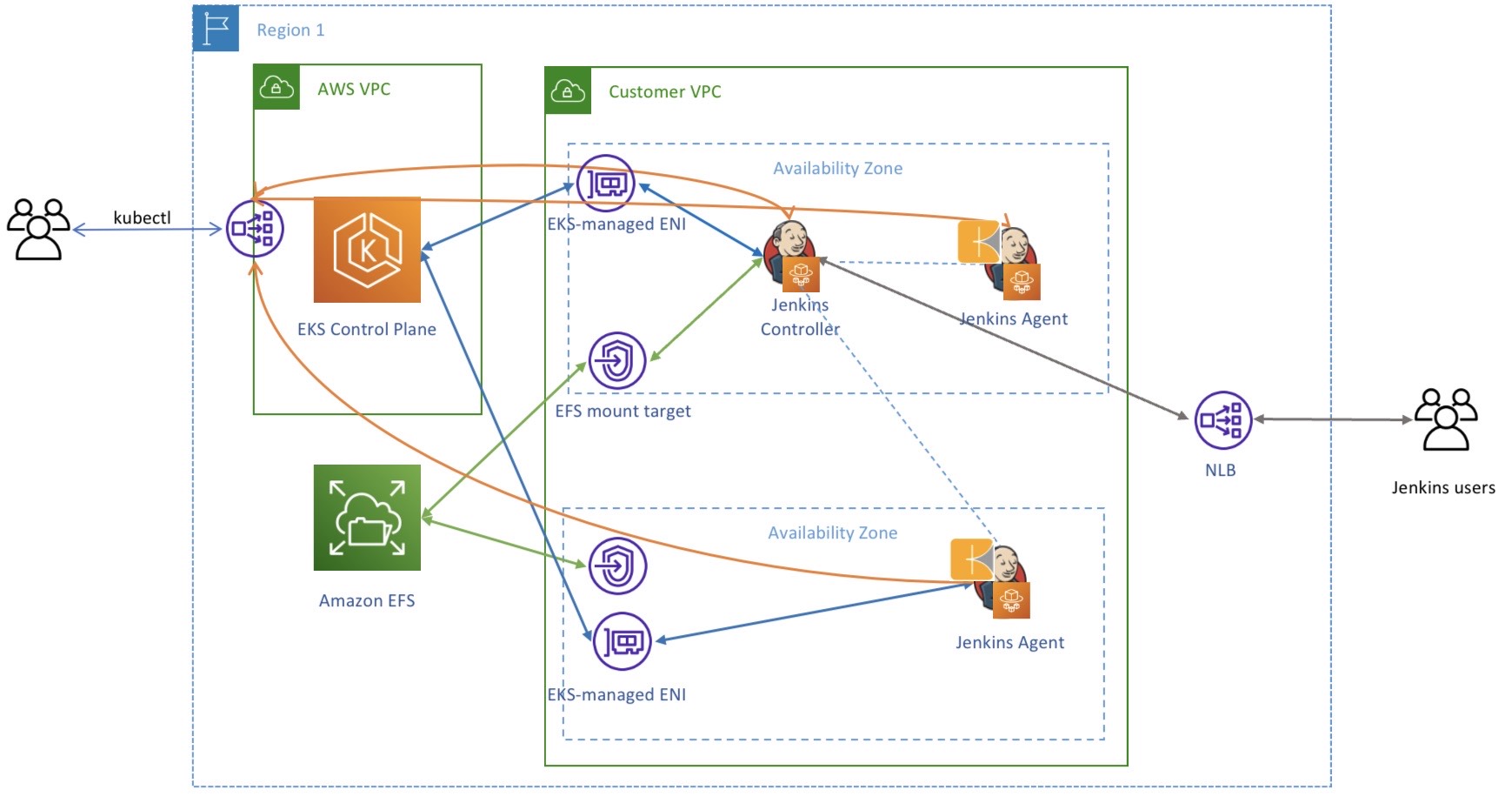 You will need the following to complete the tutorial:

We’ll use eksctl to create an EKS cluster backed by Fargate. This cluster will have no EC2 instances. Create a cluster:

With the –-fargate option, eksctl creates a pod execution role and Fargate profile and patches the coredns deployment so that it can run on Fargate.

With the load balancer and persistent storage configured, we’re ready to install Jenkins.

Use Helm to install Jenkins in your EKS cluster:

The Jenkins Helm chart creates a statefulset with 1 replica, and the pod will have 2 vCPUs and 4 GB memory. Jenkins will store its data and configuration at /var/jenkins_home path of the container, which is mapped to the EFS file system we created for Jenkins earlier in this post.

Get the load balancer’s DNS name:

Copy the load balancer’s DNS name and paste it in your browser. You should be taken to the Jenkins dashboard. Log in with username admin. Retrieve the admin user’s password from Kubernetes secrets:

With Jenkins set up, let’s create a pipeline that includes a step to build container images using kaniko.

Create three Amazon Elastic Container Registry (ECR) repositories that will be used to store the container images for the Jenkins agent, kaniko executor, and sample application used in this demo:

Create an IAM role for Jenkins service account. The role lets Jenkins agent pods push and pull images to and from ECR:

Create a new job in the UI: 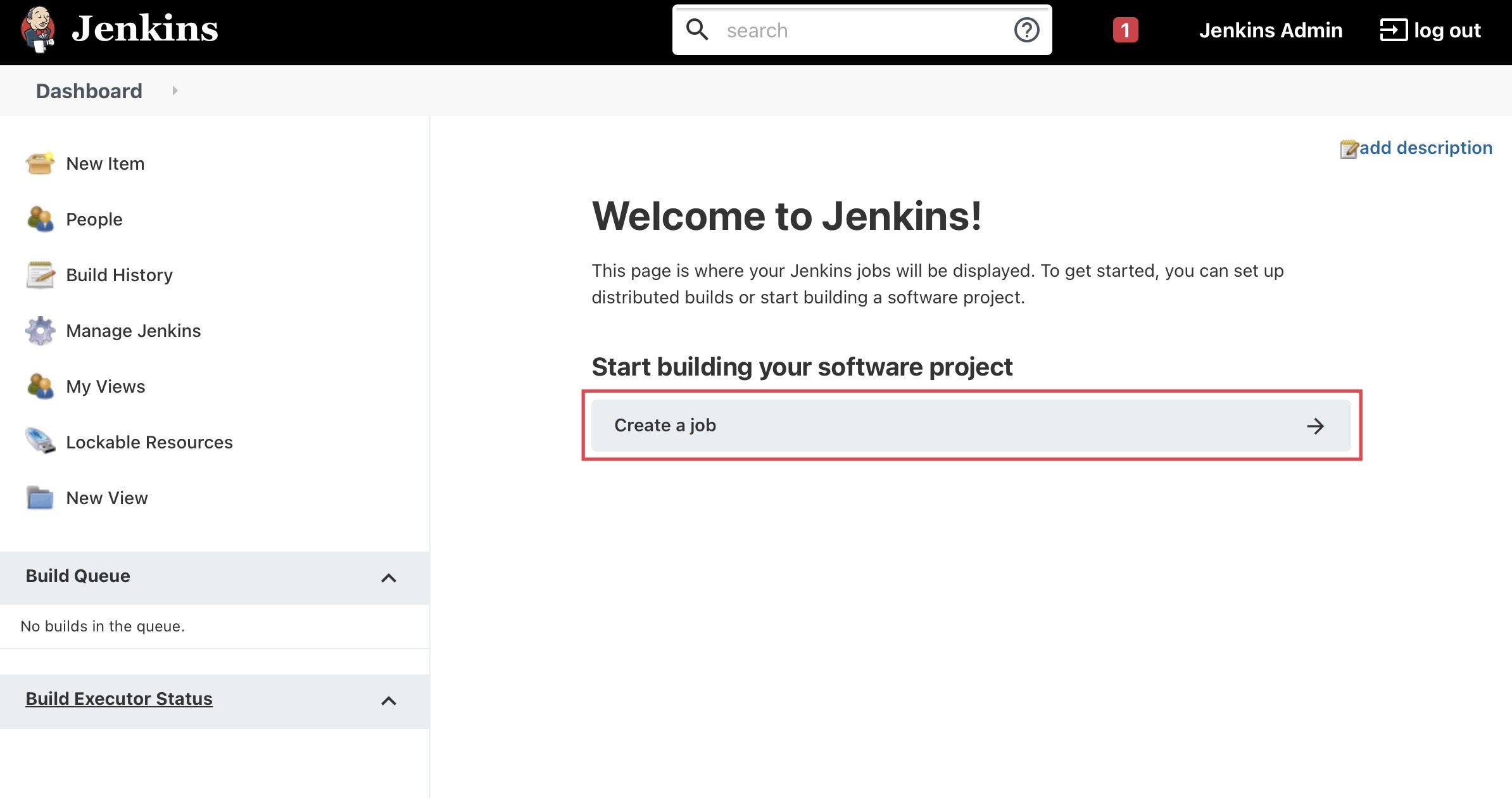 Give your job a name and create a new pipeline:

Return to the CLI and create a file with the pipeline configuration:

Copy the contents of kaniko-demo-pipeline.json and paste it into the pipeline script section in Jenkins. It should look like this: 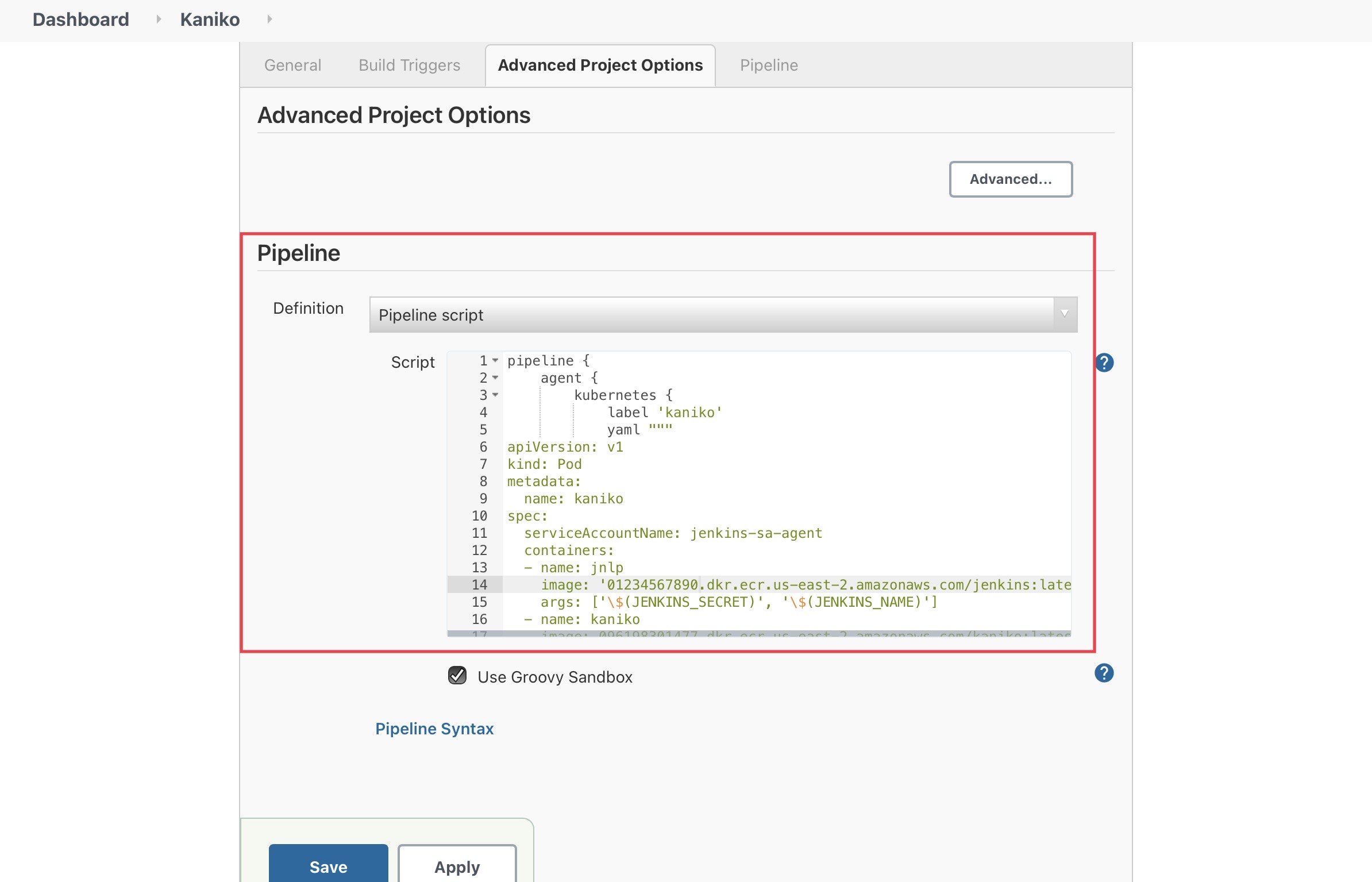 Click the Build Now button to trigger a build.

Once you trigger the build you’ll see that Jenkins has a created another pod. The pipeline uses the Kubernetes plugin for Jenkins to run dynamic Jenkins agents in Kubernetes. The kaniko executor container in this pod will clone to code from the sample code repository, build a container image using the Dockerfile in the project, and push the built image to ECR.

You can see the build by selecting the build in Jenkins and going to Console Output. 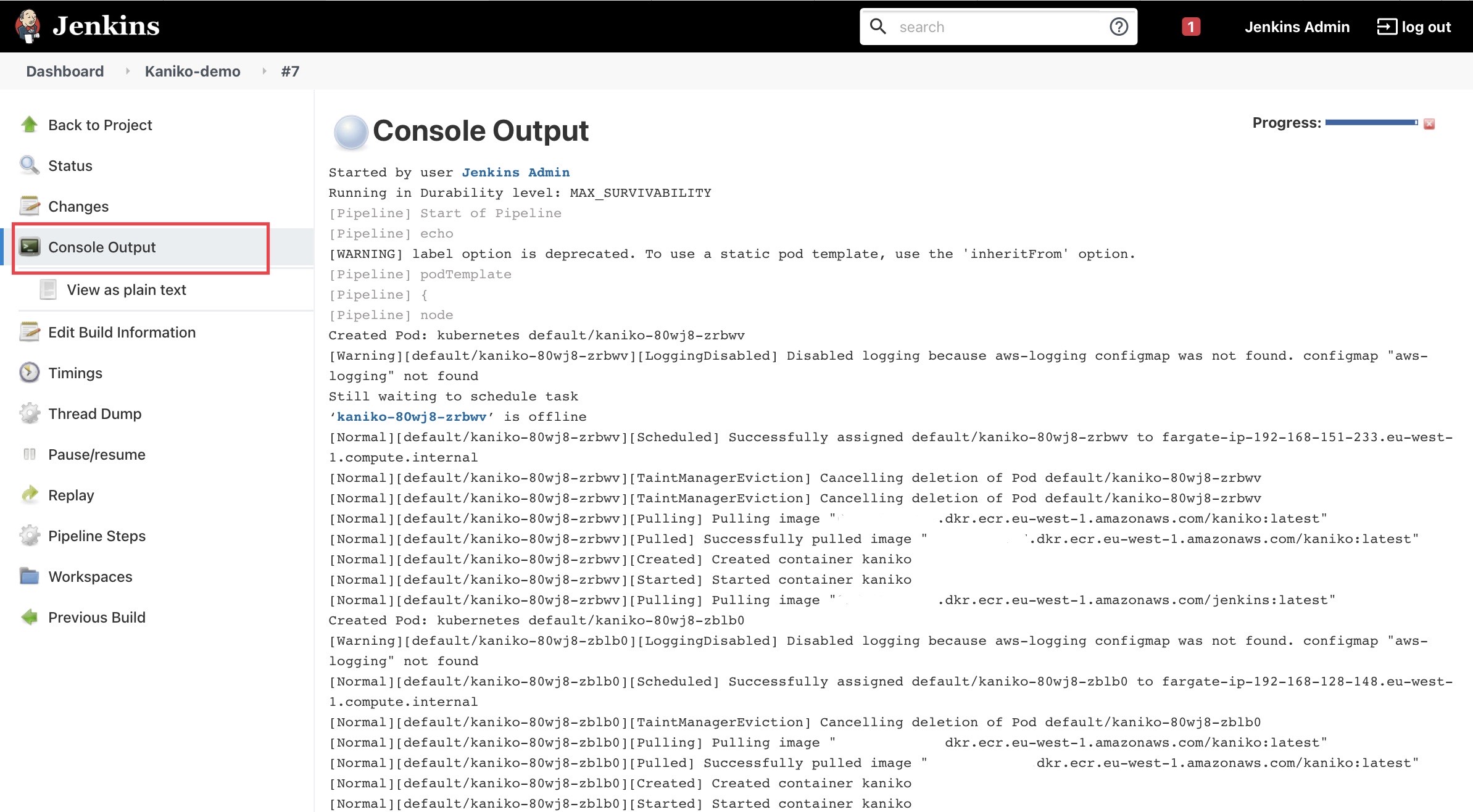 Once the build completes, return to AWS CLI and verify that the built container image has been pushed to the sample application’s ECR repository:

The output of the command above should show a new image in the ‘mysfits’ repository.

With EKS on Fargate, you can run your continuous delivery automation without managing servers, AMIs, and worker nodes. Fargate autoscales your Kubernetes data plane as applications scale in and out. In the case of automated software builds, EKS on Fargate autoscales as pipelines trigger builds, which ensures that each build gets the capacity it requires. This post demonstrated how you can a Jenkins cluster entirely on Fargate and perform container image builds without the need of --privileged mode.