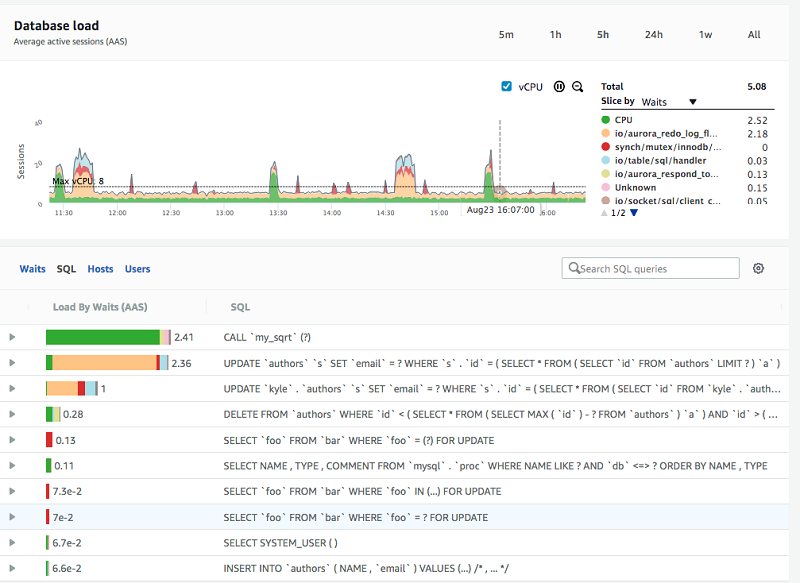 The top half of the dashboard shows database load measured in average active sessions (AAS). By default, Performance Insights shows one hour of history with each point representing the average during 1 minute. The graph automatically refreshes every minute to show new incoming data.

Database load measured in average active sessions (AAS) is a novel representation and visualization of database performance, and in essence reflects the number of database connections concurrently running queries in the database (in this context, a session is the same as a connection). For example, if a user runs a query that takes 60 seconds on an  otherwise idle database, then the DB load during that minute will be 1, because there is one session active the whole minute. If two users simultaneously run queries that take 60 seconds, then for that minute the DB load will be 2. If 60 users each run a query that takes one second, and they each run that query exactly once inside a minute, then the DB load during that minute will be 1 (since on average, there is one connection running a query in any given second of that minute). The average connections active during one minute is 1 if each execution only takes one second.

Performance Insights doesn’t only show you DB load. It also shows you what kind of activities are responsible for that load. When slice by waits is selected, Performance Insights groups DB load by the kind of activity happening, such as CPU, I/O, lock, or waiting for other database resources. By observing which waits are most responsible for DB load, you can understand what kind of contention is limiting performance.

There is an important graphic element on the load chart: The dotted Max vCPU line represents the maximum number of sessions that can be active on CPU before CPU queueing arises. For example, if I have two vCPUs and four active processes then only two of the processes can be active on the vCPU at a time. The other two will wait in the run queue.  Thus, the vCPU line is a good yardstick for measuring whether the load exceeds available resources, or whether the instance has spare capacity.

By default, a list below the DB load graph shows the  SQL queries responsible for that load. Those at the top of the list are most responsible, and are likely the SQLs you will want to focus on tuning to resolve a bottleneck.

When is your database idle?

Do you have a CPU bottleneck?

In the DB load chart below, there is a spike just before 13:30. The majority of the spike is CPU, which is colored green. The DB load from CPU demand peaks at about 15 AAS.

Because the database only has access to 8 vCPUs, this means that during the CPU demand peak, almost half of the sessions were waiting for CPU cycles at any one point in time. Another way to say this is that during that peak minute, those 15 sessions spent nearly half their time waiting to get access to CPU. If you were to provide twice the amount of CPU, then they could potentially run almost twice as fast.

In Performance Insights, you can zoom into an parts of the DB load graph by clicking and dragging. In the image here, I am zooming in to the CPU load spike on August 24.

Performance Insights zooms to that selection, and the top SQL list is re-scoped to the new timeframe: 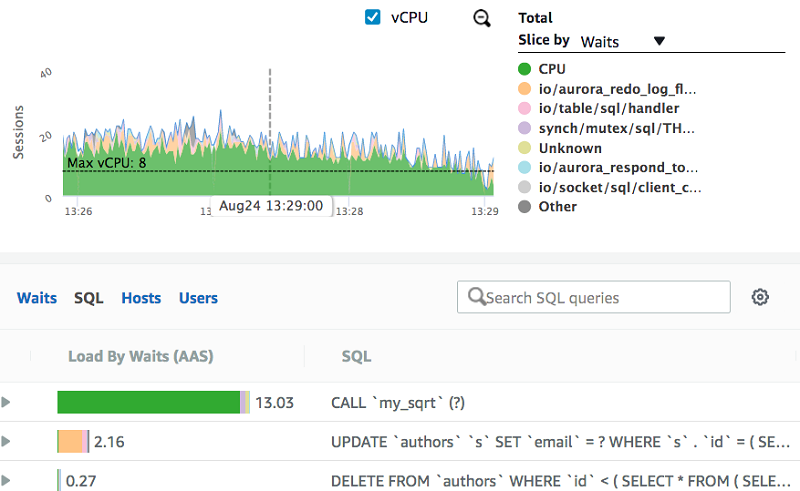 In the SQL tab below the load chart a single stored procedure, my_sqrt(), is running concurrently in several sessions and is solely responsible for the CPU load. In this scenario, you would focus on optimizing this stored procedure by examining the internal logic of the function, or by reducing the frequency the application calls it.

Do you have a bottleneck?

In the following example, we can see a spike on the left of the DB Load chart.  In this case, the spike shows that most of the load is from the Aurora MySQL wait event io/aurora_redo_log_flush, which is a wait for writing to stable Aurora storage.

If we zoom in on the spike we see: 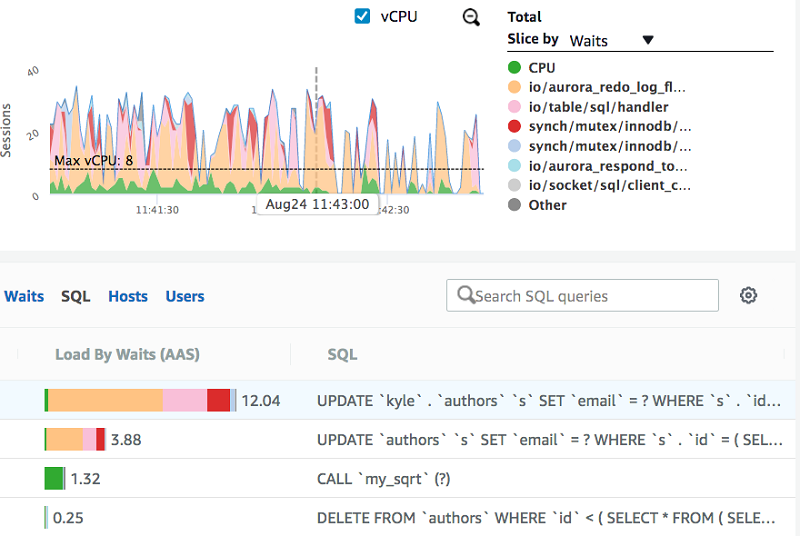 Almost all the wait for io/aurora_redo_log_flush is coming from two update statements. If we were to investigate these update statements we would find that they are single-row update statements that are not part of an explicit transaction. Aurora MySQL by default uses implicit commit (autocommit) for each execution of DML statements outside a transaction. Commits require a durable write, so after every update there is a wait for writing to stable storage. To optimize this, you could do a batch of updates, for example 50, and then commit, or group multiple different DML statements into transactions that commit at the end.

If you have comments about this blog post, submit them in the comments section below.

Kyle Hailey is a product manager for Performance Insights at Amazon Web Services.