Level Up Your Games with Amazon Aurora

Amazon Aurora is a relational database that combines the speed and reliability of high-end commercial databases with the simplicity and cost-effectiveness of open-source databases. Amazon Aurora offers two types of modes: provisioned and serverless. AWS gaming customers that use Aurora have typically observed higher throughput compared to standard installations of MySQL.

X.D. Network, one of the largest mobile gaming companies in Shanghai, uses Aurora for operating their MMORPG, Ragnarok Online. They process 25,000 write transactions/second with minimal administration and keep their read latency under 35 ms providing excellent player experience. Grani and Gumi, a top Japanese social gaming publisher, use Aurora with MySQL compatibility for their web-based games platform. Grani and Gumi are able to keep write transaction latency within the range of 15–22 ms and read transaction latency in the range of 5.5 ms. Zynga’s microservice architecture is also powered by Amazon Aurora. They use Aurora for their player identity, messaging, and payments microservice platform. With Aurora, Zynga is able to simplify its live operations and scale to billions of requests per day.

Amazon Aurora’s combination of performance, operational simplicity, and cost effectiveness has even allowed companies like Double-Down Interactive to achieve better cost effectiveness with Aurora MySQL compared to MySQL community edition. For example, the higher performance of Aurora means that you can use fewer or smaller instances than with MySQL. If you’re running a sharded MySQL environment, which we see many gaming companies do, you can potentially save money by switching to Aurora. At the same time, you can also get two to three times better performance, as you can see later in this blog post.

Finally, with Aurora Serverless you can let the service scale its capacity for you based on a policy you set. Aurora Serverless works well when the database workload is predictable, but requires that you adjust capacity manually based on the expected workload. We highlight the key advantages of the Serverless option following.

In this post, we discuss how Amazon Aurora offerings, provisioned and serverless, can help you build a reliable and scalable database tier using a sample reference architecture for a mobile game. We also highlight experiences from gaming customers who have already migrated their existing databases to Amazon Aurora.

The value of choosing the right database

When architecting an application for scale, one key factor is the database tier. The database tier is especially important for games, which are extremely read- and write-heavy. Game data is continuously updated and read as the player progresses through levels, defeats enemies, receives in-game currency, changes inventory, unlocks upgrades, and completes achievements. Each event must be written to your database layer so it isn’t lost. Losing this progress within the game can lead to negatively trending Twitter posts and being paged in the middle of the night.

Developers of games and web apps often use an open-source relational database such as MySQL for their database layer because it is familiar. The querying flexibility and the ACID properties for transactional aspects of the game logic are very appealing for many developers. The traditional way of scaling this tier, especially when using MySQL, is by sharding. In some cases, scaling is also done by splitting the reads off to a read replica. Although this approach enables developers to keep adding shards, maintaining such an infrastructure comes with overhead. For example, what if you run out of storage in a shard, or what happens if your read replica goes down? Or what happens if you lose an entire shard and the data with it when it’s unexpected?

Why do game developers feel Aurora is the right choice for them?

Getting started quickly with Amazon Aurora

These workloads are a natural fit for running on AWS, due to unexpected traffic patterns and highly demanding request rates. AWS provides the flexibility to start small and scale your architecture in response to players. Scale up and scale down your architecture to make sure that you are only paying for resources that are driving the best experience for your game. Use our managed services for popular caching and database technologies, and work with an architecture that captures the best practices of some of the largest games running on AWS today.

Amazon Aurora Serverless option
With a provisioned model for Amazon Aurora, you choose an instance size and create Aurora Replicas to increase read throughput. If the workload changes, you can modify the instance size or change the number of Aurora Replicas. This model works well when the database workload is predictable, but requires that capacity adjustments are based on the expected workload.

However, in some environments, workloads can be intermittent and unpredictable. There can be periods of heavy traffic that might last only a few minutes or hours, and long periods of light activity, or inactivity. Examples of such workload characteristics include game backend services with intermittent game events like authentication, messaging, and payments as referenced by the Zynga use case. Other good uses cases for the above are ad hoc reporting databases, development, and testing environments. In such cases, it is diﬃcult to conﬁgure the right capacity needed by the business, resulting in higher costs when provisioned capacity is not used.

In contrast, the Serverless option enables you to specify Aurora Capacity Units (ACUs). Each ACU is a combination of processing and memory capacity. Database storage automatically scales from 10 GiB to 64 TiB, the same as storage in a standard Aurora DB cluster.

Serverless has rules that are based on upper and lower thresholds for CPU utilization and connections. Aurora Serverless manages the warm pool of resources in an AWS Region to minimize scaling time. When Aurora Serverless adds new resources to the Aurora DB cluster, it uses the proxy ﬂeet to switch active client connections to the new resources. At any speciﬁc time, you are only charged for the ACUs that are being actively used in your Aurora DB cluster. 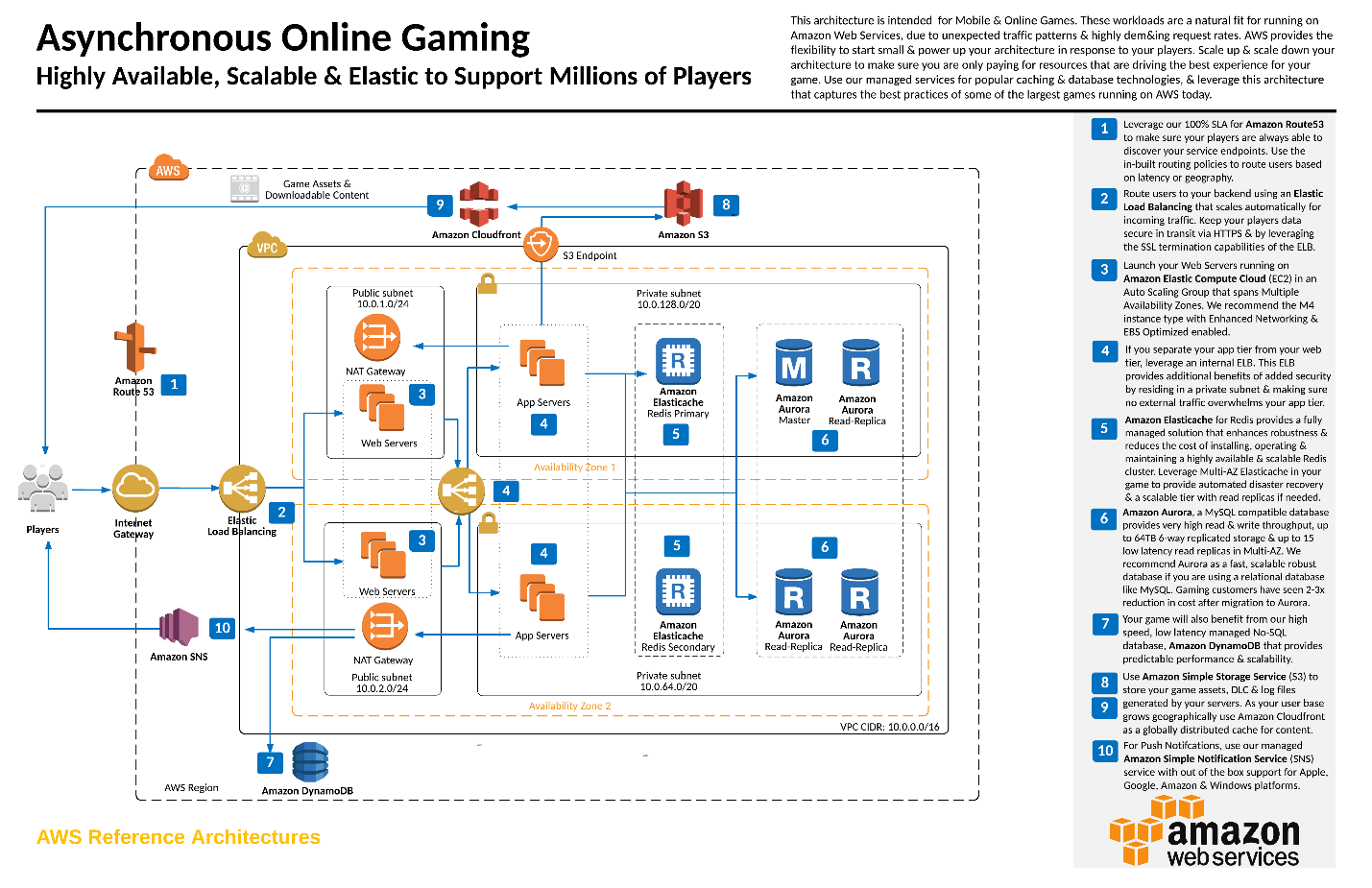 The preceding architecture recommends that you deploy Aurora in multiple Availability Zones with a recommended starting node size of R3.2XL and three Read Replicas. We recommend this setup because we assume that your game has more reads than writes and can benefit from the additional Read Replicas. You also benefit from the inherent high availability that comes when you use Aurora Replicas as a failover target.

Keep a few things in mind when referencing the preceding architecture:

This AWS Database Blog post goes into details on how you can simplify your sharded MySQL environment on Aurora: Reduce Resource Consumption by Consolidating Your Sharded System into Aurora.

You can also look into the details of how Aurora handles scaling of its storage tier in this Database Blog post: Introducing the Aurora Storage Engine.