Moving on from Amazon RDS for PostgreSQL Versions 9.4

Historically, the PostgreSQL community releases a new major version yearly, and with that, has a defined end of life (EOL) policy of older major versions. This allows version and upgrade decisions to be made on dates known well into the future. The community EOL policy is to support a major version for 5 years after its initial release. After the 5th year, a major version will have one final minor release containing any fixes and will then be considered EOL and no longer supported. The final release dates of all versions of PostgreSQL can be found on the community website. The latest major version to reach EOL was 9.4, which occurred on February 13, 2020.

If there are any existing PostgreSQL 9.4 instances in your account, you can upgrade them before April 20, 2020 by following the steps for a major version upgrade in Upgrading the PostgreSQL DB Engine for Amazon RDS.

PostgreSQL 9.4 was a feature rich release that pushed PostgreSQL into a new set of application types. The most visible feature was the introduction of the JSONB datatype. PostgreSQL 9.4 also introduced logical decoding, which allows replication tools like the AWS Database Migration Service (DMS) to use PostgreSQL as a source database. These great features and many more are available in newer major versions of PostgreSQL.

Amazon RDS recommends that all Amazon RDS PostgreSQL 9.4 instances be upgraded to PostgreSQL 11, but there may be business reasons that upgrading to a different major version is necessary. For example, some applications are not yet certified on PostgreSQL 11 and must move to a slightly earlier version. When manually upgrading ahead of the automatic upgrades starting on April 20, you can choose the version of PostgreSQL that best meets your needs. 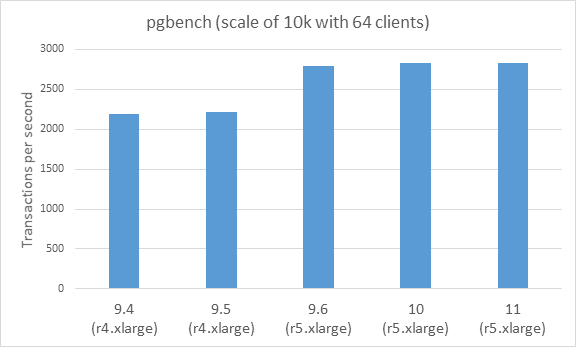 With the PostgreSQL community retiring PostgreSQL 9.4, now is the time for you to upgrade all Amazon RDS PostgreSQL 9.4 instances. Besides keeping current with security fixes, there are a number of advantages to upgrading that make PostgreSQL easier to operate, administer, and develop. Even without any changes in an application or process to leverage the new features, the general performance improvements can be seen across almost all applications. For applications using a newer version of PostgreSQL, the EOL schedule for community PostgreSQL is known out to the end of 2024 and should be managed as part of a yearly plan.

Jim is a Principal Database Engineer at AWS. Prior to joining AWS, Jim was CTO at OpenSCG and CEO at StormDB, a Postgres-XC scalable public cloud solution. Jim was chief architect and part of the founding team of EnterpriseDB. Jim also very active in the PostgreSQL community, co-founding both the New York and Philadelphia PostgreSQL Meetup groups, co-organizing the largest PostgreSQL conferences, and serving on the Board of the PostgreSQL Foundation. Jim also speaks regularly at PostgreSQL and other open sources conferences.