Many AWS customers use AWS Organizations and shared virtual private clouds (VPCs) to reduce operational costs and optimize the use of shared resources. For example, shared VPCs allow you to segregate ownership between systems management and application development teams. For more information, see VPC sharing: A new approach to multiple accounts and VPC management. Using […]

This is a guest post from Sammy Jordan, Assistant Treasurer at Contura Energy, in partnership with Emile Baizel, Sr. Blockchain Architect at AWS. In their own words, “Contura Energy is a Tennessee-based coal supplier with affiliate mining operations across major coal basins in Virginia, West Virginia, and Pennsylvania. We export metallurgical coal, a key raw material in steelmaking, to customers on five continents and approximately 25 countries.” Contura chose to run the blockchain network on Amazon Managed Blockchain because it’s a fully managed service that scales automatically, as needed, and removes a lot of the heavy lifting needed to operate a blockchain network. Additionally, you can easily integrate Managed Blockchain with other AWS services, and Managed Blockchain simplifies growing and administering the blockchain network. Network governance and inviting new members can be done via the AWS Management Console, and each member is billed separately based on their own usage. 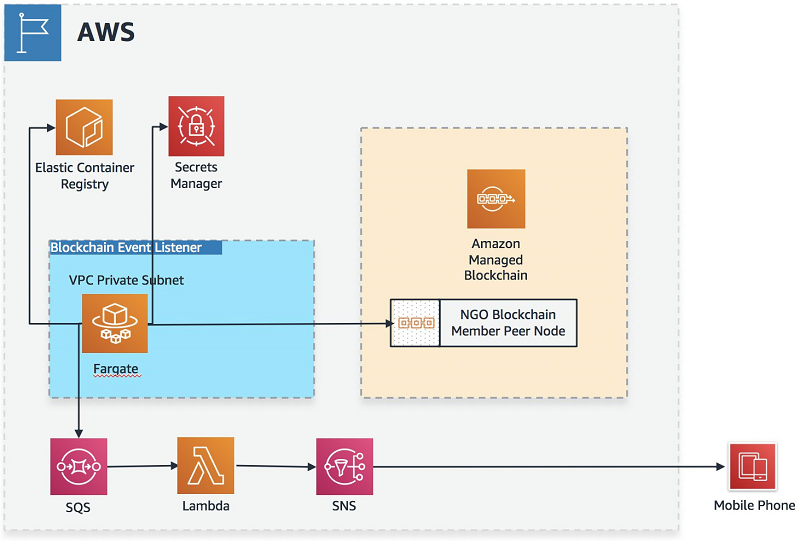 Applications built on Amazon Managed Blockchain allow multiple parties to transact with one another in a trusted environment with the ability for each party to endorse transactions before they are committed to the blockchain. Blockchain events allow applications to respond to activity and updates to the smart contracts that have been deployed to the network, […]

AWS recently launched a new integration between Amazon Managed Blockchain and Amazon CloudWatch. You can now benefit from detailed logs showing important activity in your blockchain networks, including activity in your member certificate authority (CA), Hyperledger Fabric peer nodes, and chaincode. This post shows how to use these new features to track blockchain activity in […]

AWS re:Invent is always an exciting time to engage with our customers to learn more about their use cases, receive feedback for our services, and share information about our new features and capabilities. The Amazon Managed Blockchain team delivered several sessions and workshops, highlighting how customers are leveraging blockchain technology and diving deep into building […]

In the previous post in this series, you learned how to build a Hyperledger Fabric network using Amazon Managed Blockchain. After creating the network, you deployed a three-tier application that consisted of Fabric chaincode, a RESTful API, and a user interface application. The network you created was a single-member network, suitable for experimenting and learning […]

The team that supports the GUI wallet referenced in this blog have decided to sunset their “Ethereum Wallet” application. In the process they have introduced a breaking change that prevents successful implementation of the steps outlined below. You can use blockchain for use cases where multiple parties need to transact and share data in a […]