Updated on 02/18/2021 with more details about the automatic upgrade and its timeline.

The PostgreSQL – community releases a new major version yearly, with a defined end of life (EOL) policy of older major versions. This allows you to make version and upgrade decisions well into the future. The community EOL policy is to support a major version for 5 years after its initial release. After the fifth year, a major version has one final minor release containing any fixes, and is then considered EOL and no longer supported. For the final release dates of all versions of PostgreSQL, see Versioning Policy. The next major version to reach EOL is 9.5, which is happening on February 11, 2021.

Amazon Relational Database Service (Amazon RDS) for PostgreSQL relies on the open-source community to fix critical security, availability and data correctness issues in the database engine. After the community stops supporting a major version, you’re at the risk of being exposed to one of these high – severity bugs. Therefore, it’s important to retire unsupported major versions in tandem with the community, and we encourage you to upgrade to newer versions as early as possible and validate your applications before automatic upgrades begin.

We highly recommend upgrading any Amazon RDS for PostgreSQL 9.5 databases before March 16, 2021, to allow time to test your applications. To find out if you have any 9.5 instances in a given Region, on the Amazon RDS console, navigate to the Depreciated major versions section on the Recommendations page. 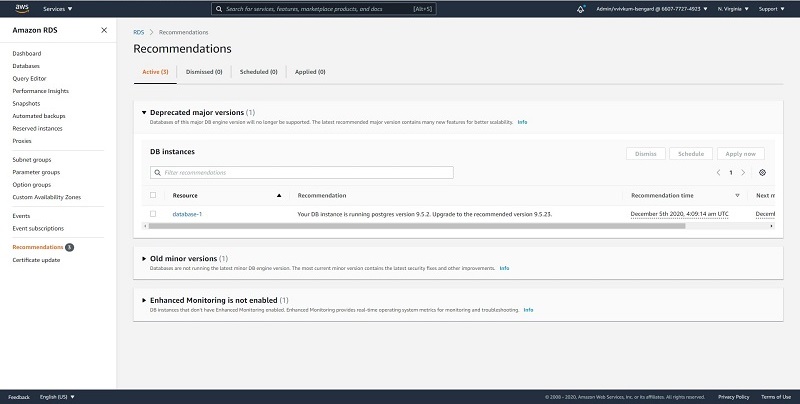 You can also get the list of all valid upgrade targets using the describe-db-engine-versions– CLI command. For example, see the following code:

If any PostgreSQL 9.5 instances are in your account, you can upgrade them before March 16, 2021. For instructions, see Upgrading the PostgreSQL DB Engine for Amazon RDS.

PostgreSQL 9.5 had significant features in its release. The most prominent were the introduction of row – level security and Block Range Indexes (BRIN). PostgreSQL 9.5 also introduced INSERT ON CONFLICT (or UPSERT) and did substantial performance improvements for sorting and for multi-CPU machines. These great features and many more are available in newer major versions of PostgreSQL.

In addition to the many new features available in each major version, Amazon RDS PostgreSQL continues to increase performance year over year. Newer PostgreSQL versions also give you access to newer instance types. A simple benchmark such as in the following visualization shows the performance of each major version with the default configuration increasing with the same application workload.

Vivek Kumar is a Solutions Architect at AWS based out of New York. He works with customers providing technical assistance and architectural guidance on various AWS services. Prior to AWS, Vivek worked for over 23 years in software engineering and architecture roles for various large-scale enterprises.