When a developer needs to target Amazon Linux 2 (AL2) to run their code but they only have access to a Windows development environment, they can use the Windows Subsystem for Linux (WSL) and Visual Studio Code (VS Code) to accomplish that. Targeting AL2 allows a developer to gain the benefits associated with AL2 – support for the latest EC2 features as well as better performing workloads due to the tuned Linux kernel.  On the developer side of the solution, VS Code combines the simplicity of a source code editor with developer-friendly features such as IntelliSense or code completion and debugging. 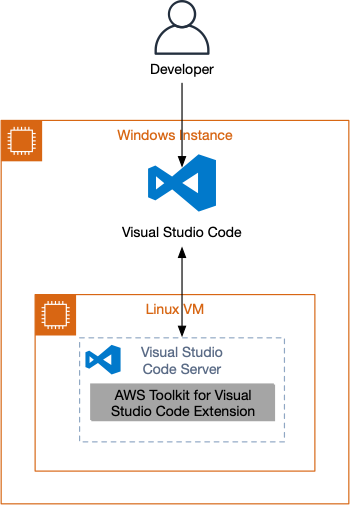 The graphic below shows the steps we will take during the Walkthrough section of this post: 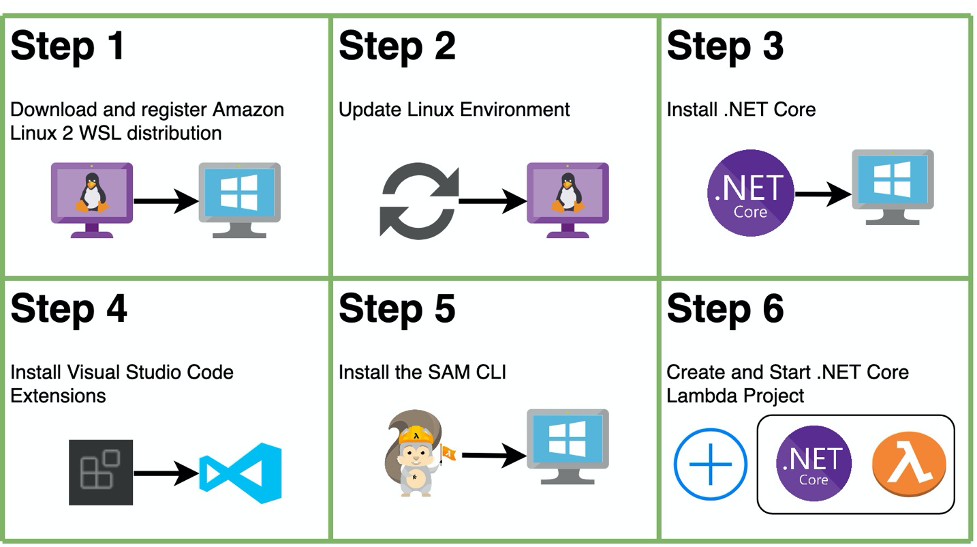 The Windows Subsystem for Linux (WSL) lets users run Linux environment directly on Windows without the need of a traditional virtual machine or dual-booting. WSL 2 provides full system call compatibility by running the Linux kernel inside a lightweight utility virtual machine (VM). Both the WSL Linux kernel and VM are managed for you, providing a similar user experience as WSL 1 with additional benefits. See the WSL 2 system requirements to determine if your system is compatible.

In this blog post, we will be using WSL 2 to run the Amazon Linux 2 distribution and leverage the Visual Studio Code Remote – WSL extension to use Amazon Linux 2 for your development environment. Using this extension, Visual Studio Code delivers the same development experience as running on Windows, including IntelliSense, code navigation, and live debugging. Additionally, your code executes on a Linux operating system just like it would in AWS Lambda.

We will further tailor your development environment on Amazon Linux 2 with the AWS Toolkit for Visual Studio Code and the SAM CLI to provide a seamless debugging experience as you develop Lambda functions. You can also add other Linux-specific tools all while using Windows as your base operating system.

Let’s take a look at how to get your .NET development environment setup using Amazon Linux 2 running on WSL2, and Visual Studio Code.

Amazon Linux 2 (AL2) is the next generation Amazon Linux operating system that provides a high performance, stable, and secure execution environment for cloud and enterprise applications. Benefits of using AL2 over other operating systems include pre-packaged features and tools, optimized for use with Amazon EC2, and due to a tuned Linux Kernel, many customer workloads perform better as well. AL2 is also available for use on EC2 Bare Metal Instances as both a bare metal OS and a virtualization host.

Core components of AL2 include:

Key features that differentiate AL2 from the Amazon Linux AMI are:

For more details about AL2, refer to the Amazon Linux documentation

The following are the high-level steps to get started setting up the Amazon Linux 2 WSL distribution for local development.

For this walkthrough, you should have completed the following prerequisite steps on your Windows machine:

Make sure to open a Windows Terminal window as we’ll be switching between the Windows instance and the Amazon Linux 2 WSL distribution. You can find it in your Windows Start Menu. 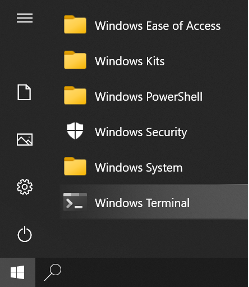 With the Windows Terminal open, we’re ready to begin. The below commands will download, install, and set Amazon2 as the default distribution. The path used was latest version as of the time of this writing. Visit the AmazonWSL Releases page to make sure you are using the latest. The last command starts WSL, launching us into the Amazon Linux 2 distribution.

After the Amazon2.exe completes execution, you will see a prompt to “Press any key to continue…”, pressing the Enter key, will allow execution to continue. The prompt can be seen in figure 3.

Once you’ve allowed execution to continue, Amazon2 is set as the default distribution and we launch WSL. You should now see your bash prompt as depicted in figure 4.

With the updates complete, we can begin installing the necessary tools to develop .NET Core applications.

The reason the last command is “exit” is because you are required to logout of the Linux environment prior to being able to use the newly installed Lambda tooling since the .NET SDK was just installed. You can see this noted by the command output in figure 5.

Jump back into the Linux environment by executing the WSL command.

To install the necessary VS Code extensions, copy and paste the following lines into your terminal:

If installation completed successfully, you should now see a message similar to “You can now run: /usr/local/bin/sam –version”, as depicted in figure 7.

That completes all of the tooling setup, let’s look at how to get a project created and start debugging.

The following command using the SAM CLI’s init command to create a new .NET Core Lambda project and opens the project’s folder with VS Code.

Once VS Code opens up the project folder, you will notice that on its status bar, it is connected to the Amazon2 WSL distribution.

Figure 8 – VS Code Connected to WSL

If you switch to the Terminal tab, you can see that it is a Bash console window. Any commands executed are run on the Linux environment.

To start a debugging session for the Lambda function created by the SAM CLI, the first step is to open the Run panel and click the “create a launch.json file” option. 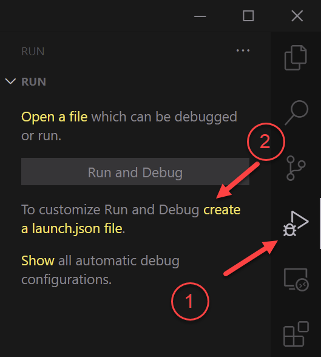 This will create a launch.json file that uses the aws-sam VS Code debugger extension. It is this extension that provides step-through debugging of your Lambda functions locally. Below is a snippet showing the configuration used to execute the HelloWorld Lambda function.

Let’s set a breakpoint on the Lambda function and see the debugging support in action. 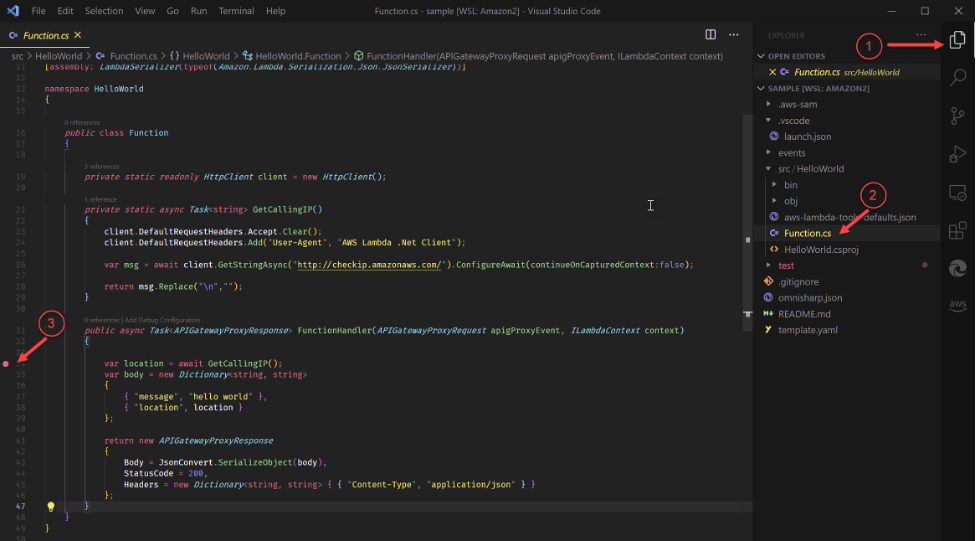 Now you are ready to run the project. You can do this be pressing the F5 key. This will launch the debugger where we can see:

In this blog post we saw how to get the best of both Windows and Linux as your development environment all on the same machine. We achieved this by running the Amazon Linux 2 distribution via the Windows Subsystem for Linux 2 and leveraged the Visual Studio Code Remote – WSL extension, AWS Toolkit for Visual Studio Code, and the AWS SAM CLI to provide a frictionless development experience. The AWS Toolkit for Visual Studio Code is built in the open source and we welcome feedback, feature requests, and issues on GitHub. Learn more about working with AWS serverless applications, including more options on how to configure the aws-sam debugger extension.

Carlos Santos is a Microsoft Specialist Solutions Architect with Amazon Web Services (AWS). In his role, Carlos helps customers through their cloud journey, leveraging his experience with application architecture, and distributed system design.

Matthew Ostovarpour is a Cloud Application Architect with Amazon Web Services (AWS) Professional Services. Working with customers analyzing, designing, and building their applications allows Matthew to think outside of the box and apply solutions to a myriad of projects.