.NET 5, which was released last month, is a major release towards the vision of a single .NET experience for .NET Core, .NET Framework, and Xamarin developers. .NET 5 is a “Current” release and is not a long term supported (LTS) version of .NET. The next LTS version will be .NET 6, which is currently scheduled to be released in November 2021. .NET 5 will be supported for 3 months after that date, which means that .NET 5 will be supported for about 15 months in total. In comparison, .NET 6 will have 3 years of support. Even though Lambda’s policy has always been to support LTS versions of language runtimes for managed runtimes, the new container image support makes .NET 5 a first class platform for Lambda functions.

While using our AWS .NET Lambda tooling, you still have access to the Dockerfile and the Docker CLI, so you can customize your Lambda running environment. Also you can add various tools, machine learning models, or additional native libraries as discussed in this post’s “System.Drawing support with container images” section.

Getting started with Visual Studio

Version 1.20.0.0 of the AWS Toolkit for Visual Studio has been released with support for container image based Lambda functions. The toolkit can be installed from the Visual Studio Marketplace.

After the toolkit is installed and a credentials profile is set up, create a new project in Visual Studio using the AWS Lambda project template for either C# or F#. After naming the project, the AWS Lambda blueprint screen will be displayed with the new .NET 5 (Container Image) blueprint option: 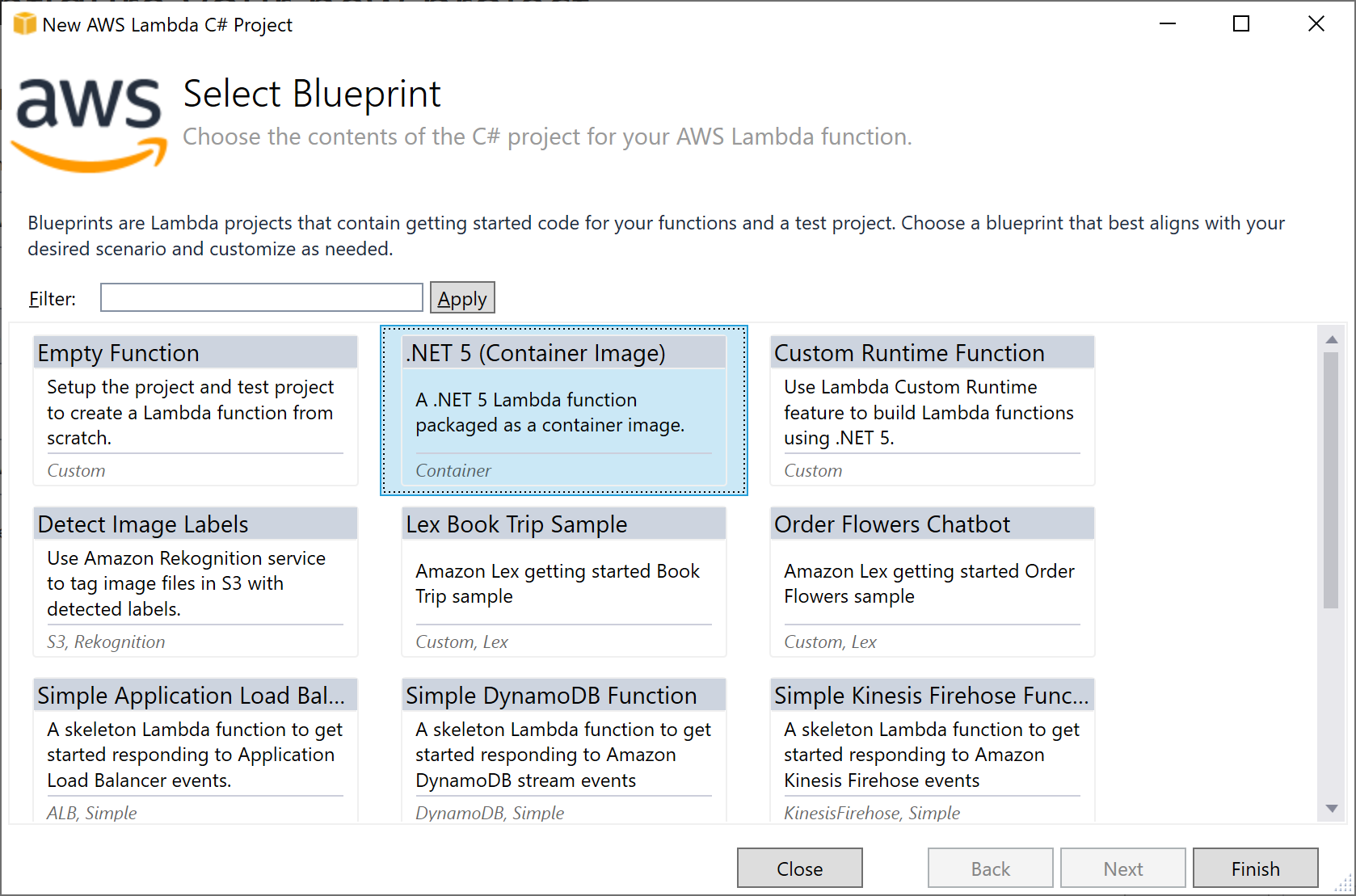 Once the project is created, it will have a Dockefile ready to build the container image. The aws-lambda-tools-defaults.json file will be prefilled with most of the settings that are required to deploy the Lambda function as a container. 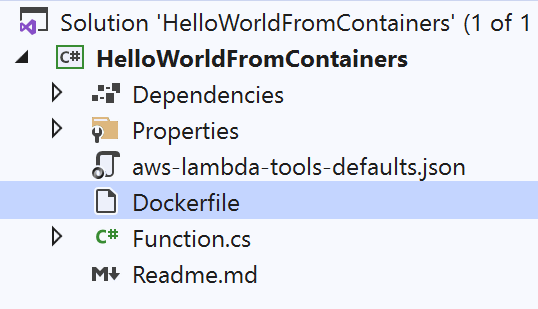 All you need to do is write the logic to solve your use case, taking advantage of .NET 5’s features. This “hello world” sample code is demonstrating the use of C# 9’s new record type being used as the return for a Lambda function:

To deploy the Lambda function, right click on the Lambda project in the Solution Explorer and select Publish to AWS Lambda… to launch the deployment wizard. With the settings in aws-lambda-tools-defaults.json written by the blueprint, the only settings you need to modify in the wizard are the function name on the first page and IAM Role on the second page.

The first page of the wizard has changed slightly compared to deploying as a zip file. It now has a new Package Type property, whose value is set to image. This property toggles fields that need to be set on the rest of the page. For a package type of image, the Image Command property works similar to the function handler property for zip packages. The value tells the Lambda runtime which .NET function to call when a Lambda event needs to be processed. The format of the string is <assembly-name>::<full-type-name>::<function-name>. The image command could also be specified directly in the Dockerfile using the CMD command. The other important properties set here are Image Repo and Image Tag , as they identify where to push the container image to Elastic Container Registry (ECR). 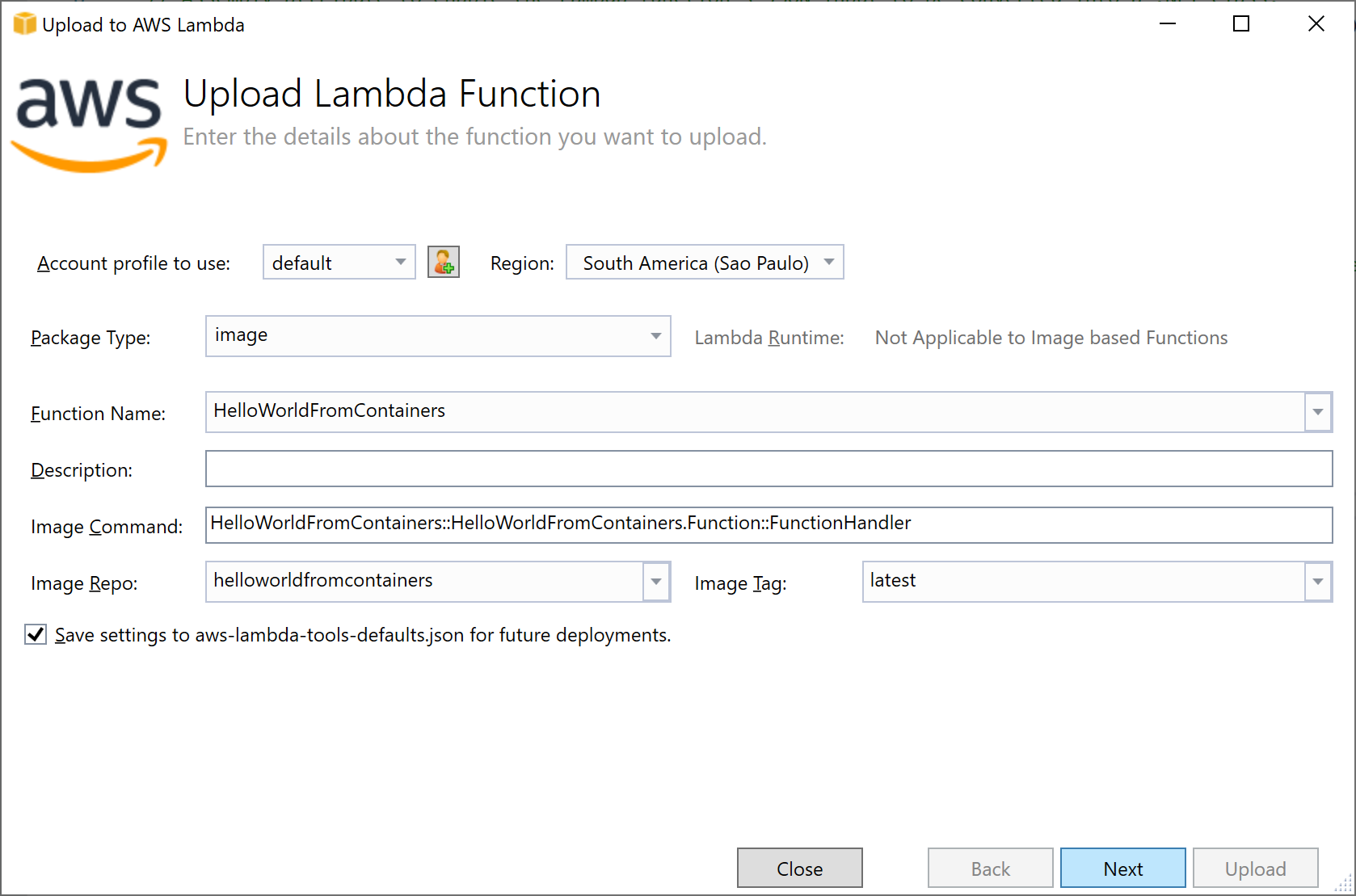 The second page in the wizard hasn’t changed compared to packaging functions as a zip file. Here you need to set the Role Name field to give the Lambda function AWS credentials to access AWS services. 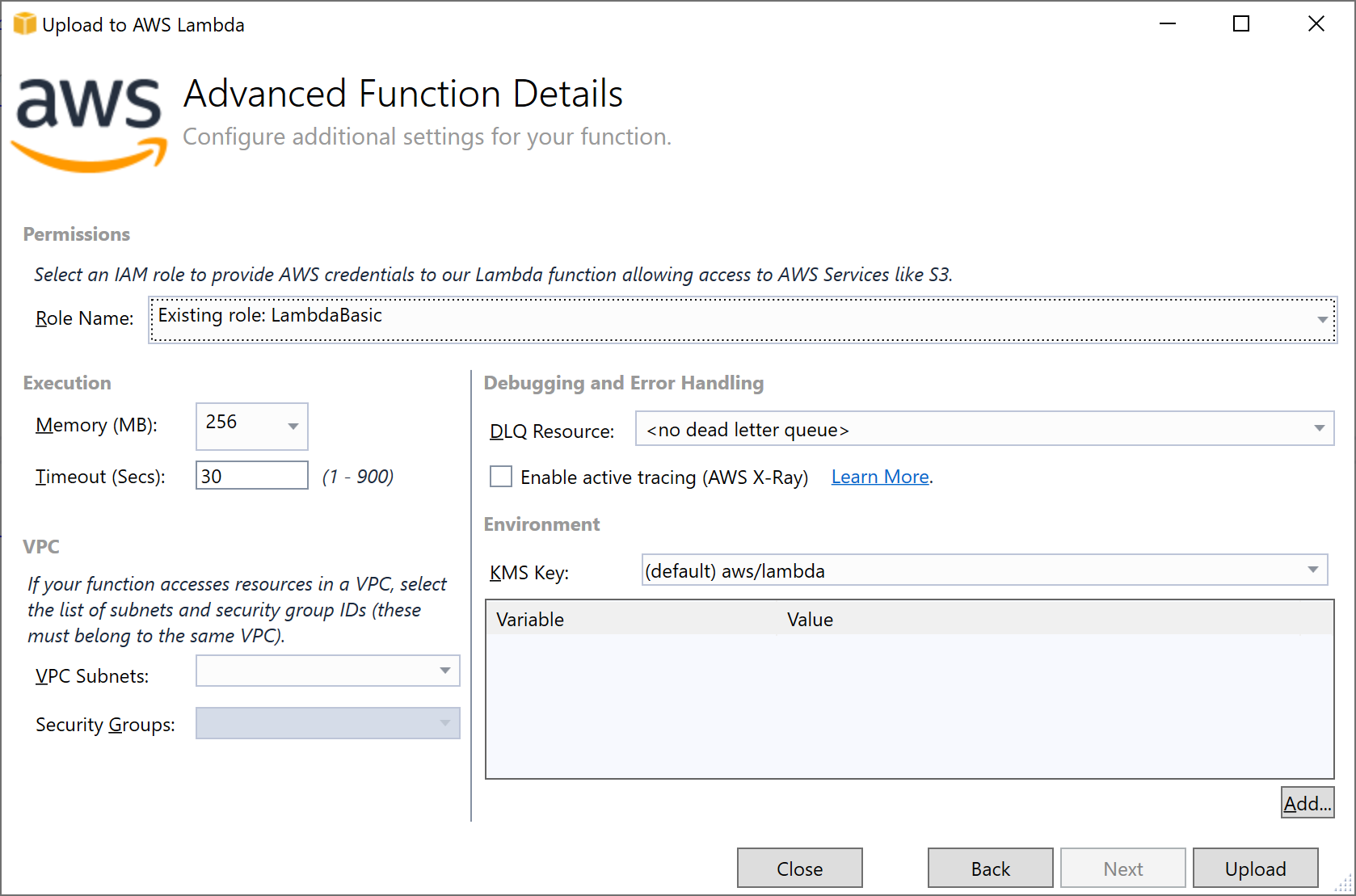 In this short clip that shows the deployment process, you can see that the entire image is being uploaded to ECR. The initial push will take longer than zip file deployments because this is the first time an image is being uploaded to the repository. Subsequent uploads will be faster because container images are broken up into layers, and only the layers that have changed will be pushed. Typically in future re-deployments the only layer that will be pushed is the layer that contains just your code.

In the toolkit you can also deploy Lambda functions using CloudFormation by creating a project using the AWS Serverless Application project template for either C# or F#. When you pick the blueprint for the serverless application, you will have a basic .NET 5 Container Image blueprint and an ASP.NET Core 5 container image blueprint both available. 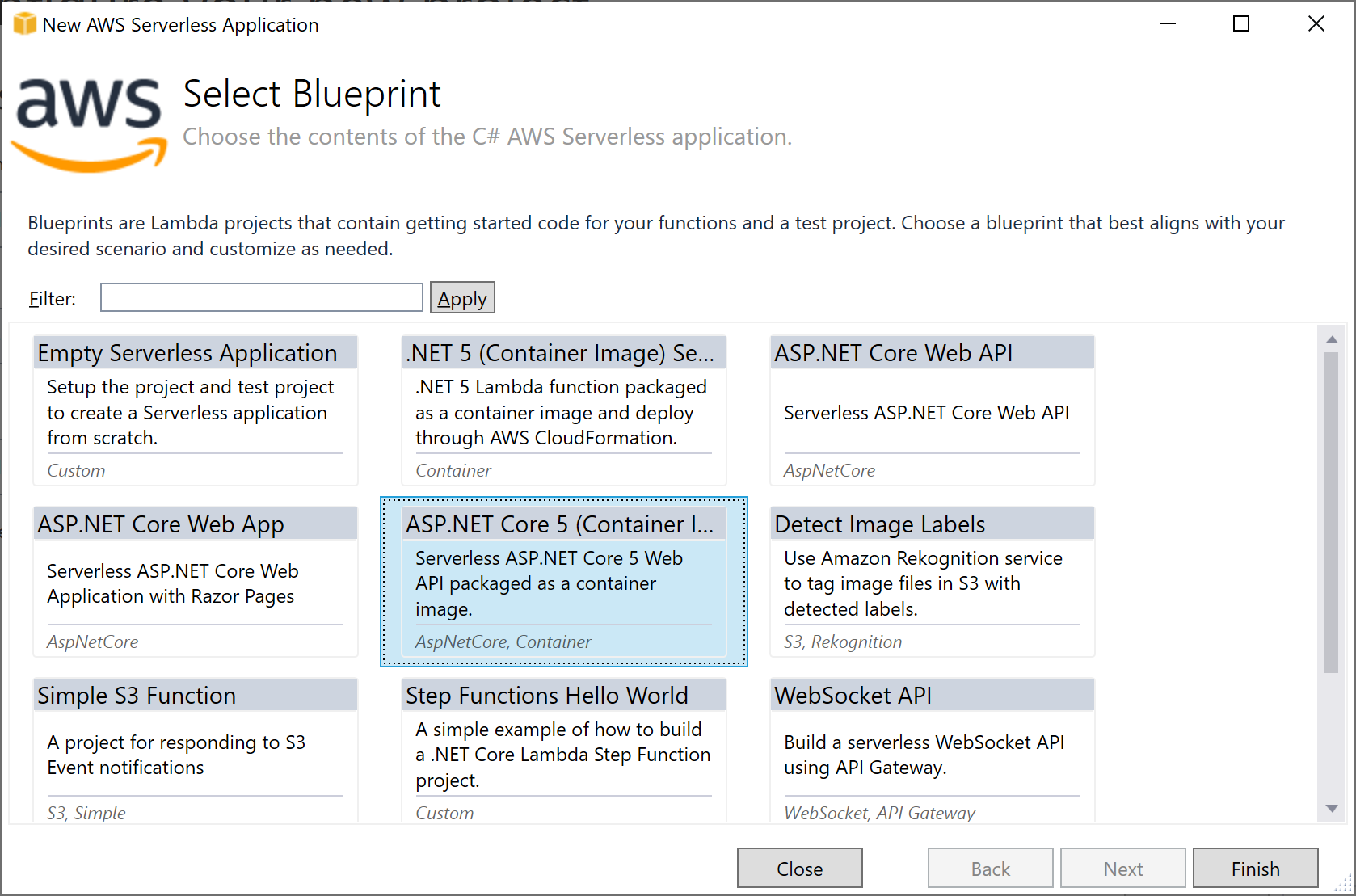 You can use the Dockerfile to customize the Lambda environment your .NET Lambda function is running in, but besides that the experience hasn’t changed much from zip based Lambda functions. There are a couple changes to be aware of in the CloudFormation template, specifically with the AWS::Serverless::Function resource. In a zip based Lambda function the CodeUri property is used as the relative path to the .NET project. If this property is not set, then the directory of the CloudFormation template is used. For image based Lambda functions the ImageUri property serves that same purpose. The other change is that the Handler and Runtime properties are no longer used. To identify the .NET code to run for an event, set the ImageConfig.Command property that will be translated into a CMD command for the container image.

Getting started from the .NET CLI

For container image support, Amazon.Lambda.Templates has been updated with the same templates you saw in Visual Studio. You can install the AWS templates using the following command:

Now when you run dotnet new, the same templates will be available at the command line:

With the template package installed, you can create a project using the short names listed above.

To deploy the project, install Amazon.Lambda.Tools using the following command:

If the tool is already installed, be sure to update to the latest version using the following command:

In addition, the following command line arguments were added to configure how the container image is built:

All command line arguments can be specified in the aws-lambda-tools-defaults.json file to avoid having to specify them on the command line. The project templates from either Visual Studio or the dotnet new command will have a few arguments prefilled to give an easy getting started experience. They can be customized based on your needs.

So far we have focused on using container images just as a packaging feature, but they also provide powerful capabilities, allowing you to customize the Lambda environment your .NET code is running in.

For example, one of the most highly requested features by Lambda developers who use .NET is to use the System.Drawing libraries of .NET in Lambda. This is often needed for simple image manipulation or adding watermarks to images. To get System.Drawing to work in a Linux environment, you need to install the libgdiplus native dependency. This dependency is not installed in the Lambda managed runtime environment. When packaging a .NET Lambda function as a container image, the Dockerfile can be modified to include those dependencies in the container.

Adding System.Drawing support is just one example of customization. With the 10 GB container image support in Lambda, you can now embed large machine learning models to use with ML.NET, including additional tools you need to shell out to from your .NET code, or whatever else you can think of.

The best way to test your Lambda functions is to write automated tests. The AWS .NET Lambda project template provides an option to create a .NET test project. You also have a few options for adhoc testing.

The AWS Mock .NET Lambda Test Tool has been updated to support .NET 5. The latest version of the AWS Toolkit for Visual Studio will take care of configuring the test tool for .NET 5 based Lambda functions. That includes installing the test tool from NuGet using the new Amazon.Lambda.TestTool-5.0 NuGet package. Check out the test tool’s README file for more information.

Note that the last parameter is the function handler string that identifies the piece of .NET code to call. It is the value you specify for the Image Command when deploying the function. The format of the string is <assembly-name>::<full-type-name>::<function-name>. If you don’t want to specify the value on the command line when running locally or when deploying your function, you can also specify the value inside the Dockerfile like this:

To send events into the local running Lambda function, you can send the JSON payload into the function using any HTTP tool. Here is an example using curl:

There are a lot of possibilities with the new container image support for Lambda using .NET Core 2.1, 3.1 and .NET 5. It’s easy to get started either from Visual Studio with the AWS Toolkit for Visual Studio or the .NET CLI using Amazon.Lambda.Tools. If you are having issues or want to tell us what you think about the new container support experience, reach out to us in our GitHub repositories: