Feature toggles (or feature flags) are a software development technique allowing developers to programmatically enable or disable features of an application. In practice, feature toggles control a system’s behavior by controlling conditional statements in the application code.

Feature toggles have a number of use cases:

In the following example code, the Boolean variable example_feature_toggle functions as a feature toggle and controls the system behavior by forcing the system to do_something() or do_something_else():

In this post, we explore a serverless solution that uses managed service offerings from AWS to add simple, customizable, and real-time feature toggles to your application. This solution uses Amazon DynamoDB and Amazon DynamoDB Streams to capture feature toggle changes and trigger an AWS Lambda function that pushes notifications to connected clients through Amazon API Gateway WebSocket APIs.

The code for this solution is stored in a GitHub repository. 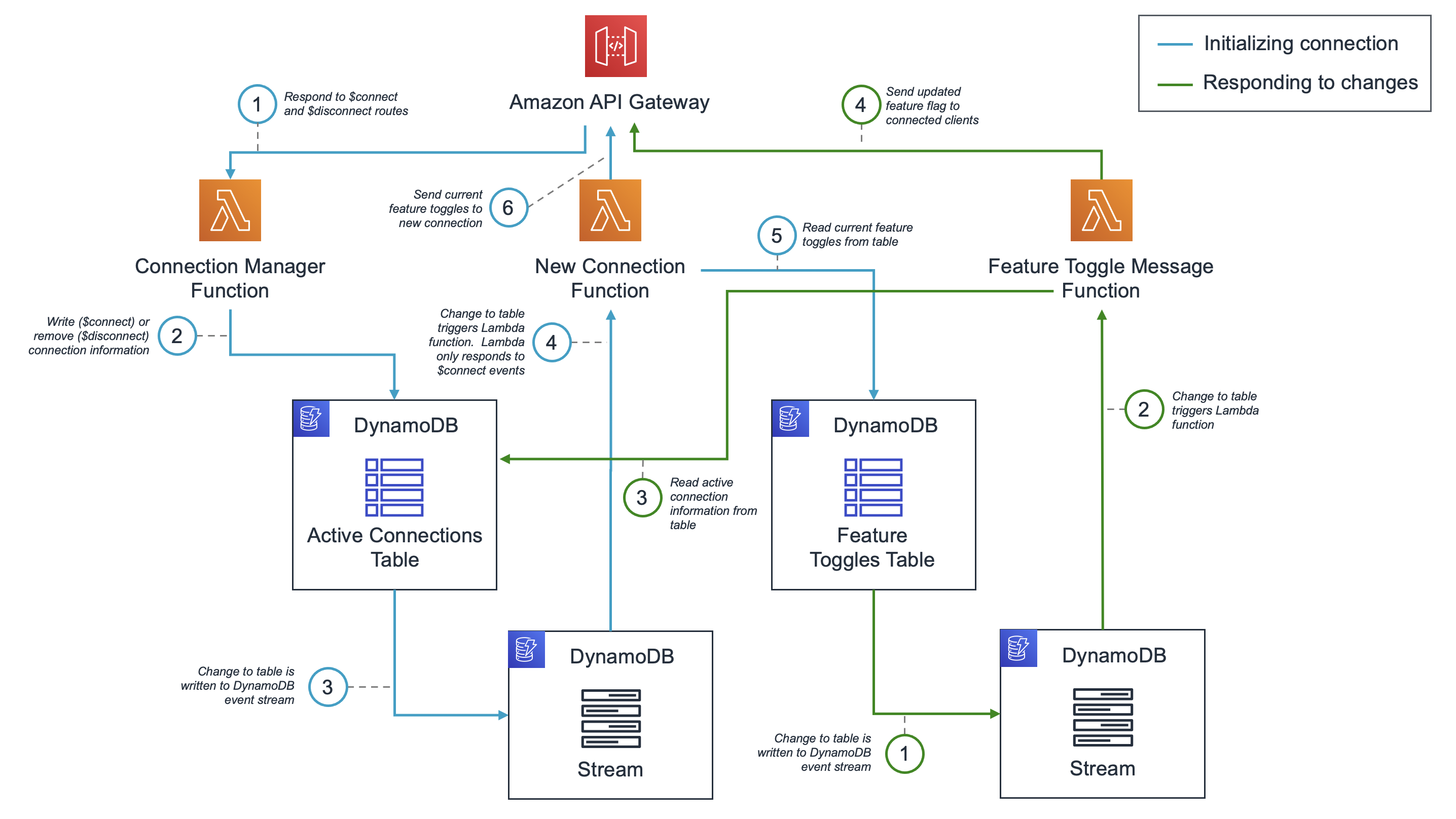 This architecture represents a complete, customizable service that offers the following benefits:

The feature toggle service is exposed via a single API Gateway WebSocket API, and this API consists of only two routes (as shown in the following screenshot): $connect and $disconnect.

When a client first connects to the feature toggle service, we need to notify the client of the current state of all feature toggles in our application. To do this, we configure a DynamoDB stream to capture changes to the active connections table, and configure the new connection Lambda function to be triggered on writes to the stream. The DynamoDB stream (see the following screenshot) is configured to reflect the NEW_IMAGE of any changed data, meaning the stream contains the entire changed item as it appears after it’s modified.

For more information about working with Lambda functions to process records in a DynamoDB stream, see Using AWS Lambda with Amazon DynamoDB.

To create this stack, you can deploy the AWS Serverless Application Model (AWS SAM) template in the GitHub repository for this post. Be sure to configure your AWS CLI with an AWS Identity and Access Management (IAM) user that has permissions to create the resources described in the template. For more details on creating custom IAM users and policies, see Manage IAM permissions. Additionally, you need to have the AWS SAM CLI installed to use the sam command to deploy the stack.

To test our feature toggle service, we use wscat, an open-source command line tool that allows us to send and receive messages over WebSocket connections. To connect to our service, we use the endpoint exposed by API Gateway. This endpoint, as shown in the following screenshot, is produced as an output of the deployed AWS SAM template, and is also available on the API Gateway console.

When we initiate a connection to our service, we should receive a notification of the current state of all feature toggles.

When any of the feature toggles are changed in DynamoDB, the service automatically pushes these changes to the connected client.

For example, the following code illustrates a notification indicating the status of an existing feature toggle has changed:

The following code illustrates a notification of a new feature toggle:

The following code illustrates a notification of a feature toggle being deleted:

In this post, you saw how to use managed services from AWS to form the core of a solution to deliver real-time feature toggles to your application. With DynamoDB Streams and WebSocket APIs, we built this service with a relatively small amount of code and simple service integration configurations.

The patterns demonstrated in this solution aren’t limited to feature toggles; you can use them in any scenario where an application needs to perform additional processing of events from a DynamoDB stream and send these events to other systems.