In Part 1 of this post, we described how AWS CodeBuild, AWS CodeCommit, and HashiCorp Packer can be used to build an Amazon Machine Image (AMI) from the latest version of Amazon Linux. In this post, we show how to use AWS CodePipeline, AWS CloudFormation, and Amazon CloudWatch Events to continuously ship new AMIs. We use Ansible by Red Hat to harden the OS on the AMIs through a well-known set of security controls outlined by the Center for Internet Security in its CIS Amazon Linux Benchmark.

You’ll find the source code for this post in our GitHub repo.

At the end of this post, we will have the following architecture:

To follow along, you will need Git and a text editor. Make sure Git is configured to work with AWS CodeCommit, as described in Part 1.

In addition to the services and products used in Part 1 of this post, we also use these AWS services and third-party software:

AWS CloudFormation gives developers and systems administrators an easy way to create and manage a collection of related AWS resources, provisioning and updating them in an orderly and predictable fashion.

Amazon CloudWatch Events enables you to react selectively to events in the cloud and in your applications. Specifically, you can create CloudWatch Events rules that match event patterns, and take actions in response to those patterns.

AWS CodePipeline is a continuous integration and continuous delivery service for fast and reliable application and infrastructure updates. AWS CodePipeline builds, tests, and deploys your code every time there is a code change, based on release process models you define.

We use CloudFormation to bootstrap the following infrastructure:

After launching the CloudFormation template linked here, we will have a pipeline in the AWS CodePipeline console. (Failed at this stage simply means we don’t have any data in our newly created AWS CodeCommit Git repository.) 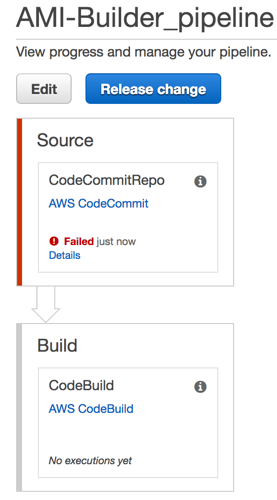 Next, we will clone the newly created AWS CodeCommit repository.

If this is your first time connecting to a AWS CodeCommit repository, please see instructions in our documentation on Setup steps for HTTPS Connections to AWS CodeCommit Repositories.

Bootstrap the Repo with the AMI Builder Structure

Now that our infrastructure is ready, download all the files and templates required to build the AMI.

Your local Git repo should have the following structure:

Next, push these changes to AWS CodeCommit, and then let AWS CodePipeline orchestrate the creation of the AMI:

While we wait for the AMI to be created, let’s see what’s changed in our AWS CodeBuild buildspec.yml file:

Lastly, the new artifacts phase instructs AWS CodeBuild to upload files built during the build process (ami_builder_event.json and build.log) to the S3 bucket specified in the Outputs section of the CloudFormation template. These artifacts can then be used as an input artifact in any later stage in AWS CodePipeline.

For information about customizing the artifacts sequence of the buildspec.yml, see the Build Specification Reference for AWS CodeBuild.

CloudWatch Events allow you to extend the AMI builder to not only send email after the AMI has been created, but to hook up any of the supported targets to react to the AMI builder event. This event publication means you can decouple from Packer actions you might take after AMI completion and plug in other actions, as you see fit.

In this case, CloudWatch Events should receive the following event, match it with a rule we created through CloudFormation, and publish a message to SNS so that you can receive an email.

In addition to the build specification file, there are differences between the current version of the HashiCorp Packer template (packer_cis.json) and the one used in Part 1.

We no longer assume a default VPC is present and instead use the VPC and subnet specified in the CloudFormation parameters. CloudFormation configures the AWS CodeBuild project to use these values as environment variables. They are made available throughout the build process.

That allows for more flexibility should you need to change which VPC and subnet will be used by Packer to launch temporary resources.

We now have new properties (*_tag) and a new function (clean_ami_name) and launch temporary resources in a VPC and subnet specified in the environment variables. AMI names can only contain a certain set of ASCII characters. If the input in project deviates from the expected characters (for example, includes whitespace or slashes), Packer’s clean_ami_name function will fix it.

For more information, see functions on the HashiCorp Packer website.

We used shell provisioner to apply OS patches in Part 1. Now, we use shell to install Ansible on the target machine and ansible-local to import, install, and execute Ansible roles to make our target machine conform to our standards.

Packer uses shell to remove temporary keys before it creates an AMI from the target and temporary EC2 instance.

Ansible provides OS patching through a custom Common role that can be easily customized for other tasks.

CIS Benchmark and Cloudwatch Logs are implemented through two Ansible third-party roles that are defined in ansible/requirements.yaml as seen in the Packer template.

The Ansible provisioner uses Ansible Galaxy to download these roles onto the target machine and execute them as instructed by ansible/playbook.yaml.

For information about how these components are organized, see the Playbook Roles and Include Statements in the Ansible documentation.

Both third-party Ansible roles can be easily configured through variables (vars). We use Ansible playbook variables to exclude CIS controls that don’t apply to our case and to instruct the CloudWatch Logs agent to stream the /var/log/messages log file to CloudWatch Logs.

If you need to add more OS or application logs, you can easily duplicate the playbook and make changes. The CloudWatch Logs agent will ship configured log messages to CloudWatch Logs.

For more information about parameters you can use to further customize third-party roles, download Ansible roles for the Cloudwatch Logs Agent and CIS Amazon Linux from the Galaxy website.

Now that Ansible and CloudWatch Events are configured as a part of the build process, commiting any changes to the AWS CodeComit Git Repository will triger a new AMI build process that can be followed through the AWS CodePipeline console. 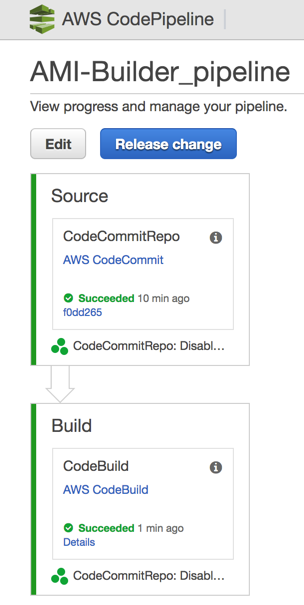 When the build is complete, an email will be sent to the email address you provided as a part of the CloudFormation stack deployment. The email serves as notification that an AMI has been built and is ready for use.

We used AWS CodeCommit, AWS CodePipeline, AWS CodeBuild, Packer, and Ansible to build a pipeline that continuously builds new, hardened CIS AMIs. We used Amazon SNS so that email addresses subscribed to a SNS topic are notified upon completion of the AMI build.

By treating our AMI creation process as code, we can iterate and track changes over time. In this way, it’s no different from a software development workflow. With that in mind, software patches, OS configuration, and logs that need to be shipped to a central location are only a git commit away.

Here are some ideas to extend this AMI builder:

Cloudwatch Events allow the AMI builder to decouple AMI configuration and creation so that you can easily add your own logic using targets (AWS Lambda, Amazon SQS, Amazon SNS) to add events or recycle EC2 instances with the new AMI.

If you have questions or other feedback, feel free to leave it in the comments or contribute to the AMI Builder repo on GitHub.