This walkthrough shows you how to migrate multiple repositories to AWS CodeCommit from GitLab and set up a CI/CD pipeline using AWS CodePipeline and AWS CodeBuild. Event notifications and pull requests are sent to Amazon Chime for project team member communication.

Over the years the number of repositories hosted in my GitLab environment grew beyond 100 and maintaining it with patches, updates, and backups was time consuming and risky. Migrating over to AWS CodeCommit project by project manually would have been a tedious process and error pone. I wanted to run a script to handle the AWS setup and migration of code for me.

The documentation for AWS CodeCommit has an example how to migrate a single repository, I wanted to migrate many though.

As part of the migration, I had a requirement to set up a CI/CD pipeline using AWS CodePipeline and send notifications on activity in the repository to Amazon Chime, which I use for communication between project members. 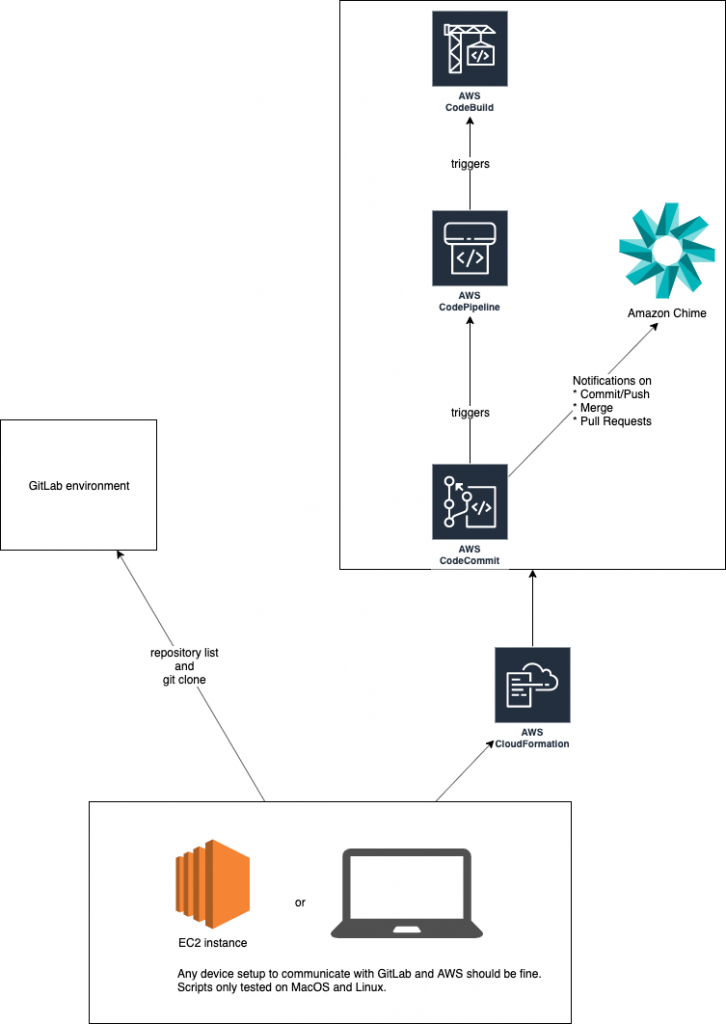 commands against the SSH endpoint of the repositories.

For every GitLab repository, a CloudFormation template creates a AWS CodeCommit repository and the AWS CodePipeline, AWS CodeBuild resources. If an Amazon Chime webhook is configured, also the Lambda function to post to Amazon Chime is created.

One S3 bucket for artifacts is also setup with the first AWS CodeCommit repository and shared across all other AWS CodeCommit and AWS CodePipeline resources.

The migration script can be executed on any system able to communicate with the existing GitLab environment through SSH and the GitLab API and with AWS endpoints and has permissions to create AWS CloudFormation stacks, AWS IAM roles and policies, AWS Lambda, AWS CodeCommit, AWS CodePipeline, .

To pull all the projects from GitLab without needing to define them previously, a GitLab personal access token is used.

You can configure to migrate user specific GitLab project, repositories for specific groups or individual projects or do a full migration of all projects.

For the AWS CodeCommit, CodePipeline, and CodeBuild – following best practices – I use CloudFormation templates that allow me to automate the creation of resources.

The Amazon Chime Notifications are setup using a serverless Lambda function triggered by CloudWatch Event Rules and are optional.

I wrote and tested the solution in Python 3.6 and assume pip and git are installed. Python 2 is not supported.

The GitLab version that we migrated off of and tested against was 10.5. I expect the script to work fine against other versions that support REST calls as well, but didn’t test it against those.

After you have set up the environment, I recommend to test the migration with one sample project. On a command line, type

It will take around 30 seconds for the CloudFormation template to create the AWS CodeCommit repository and the AWS CodePipeline and deploy the Lambda function. While deploying or when you are interested in the setup you can check the state in the AWS Management Console in the CloudFormation service section and look at the template. 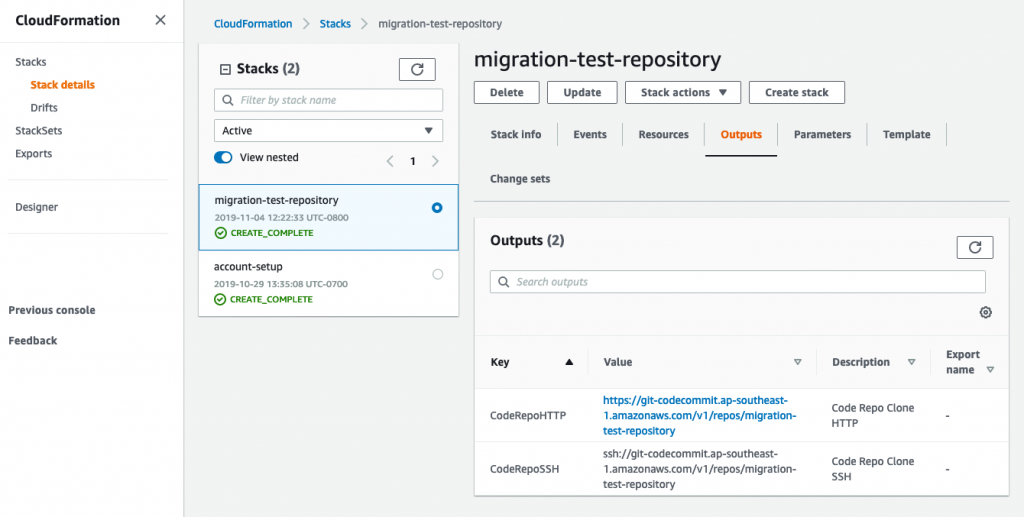 Time it takes to push the code depends on the size of your repository. Once you see this running successful you can continue to push all or a subset of projects.

I also included a script to set repositories to read-only in GitLab, because once you migrated to CodeCommit it is a good way to avoid users still pushing to the old remote in GitLab.

To avoid incurring future charges for test environments, delete the resources by deleting the CloudFormation templates account-setup and the stack for the repository you created.

The blog post did show how to migrate repositories to AWS CodeCommit from GitLab and set up a CI/CD pipeline using AWS CodePipeline and AWS CodeBuild.

The source code is available at https://github.com/aws-samples/gitlab-to-codecommit-migration

Please create issues or pull requests on the GitHub repository when you have additional requirements or use cases.