Trading Technologies: A Financial Service Firm’s Journey to the Cloud 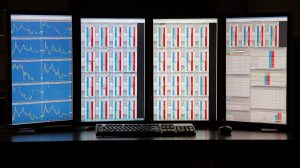 Rick Lane is my kind of CEO. I had the opportunity to meet with the Trading Technologies (TT) CEO and a few members of his team last week to learn about their journey to the cloud. On this journey Rick led the company through a complete redevelopment of their flagship futures trading platform using AWS and a modern technology stack. What started as an effort to keep their platform relevant in the 21st century seems to have positioned TT to leapfrog the competition and set a precedent for the financial services industry.

TT’s journey started with a simple question: How do we prevent ourselves from becoming another great technology company that has let technology pass us by?

TT’s core platform was a monolithic Windows application. New versions were shipped via FTP. Upgrade cycles often took several months. Financial service firms are quite thorough when performing due diligence on potential changes to their IT environments. This process often took longer than it did for TT to release the next version. The number of versions that they had to support and manage was encumbering. On top of this, because their customers controlled the rollout, TT didn’t know who was using their application, and when. When they made enhancements there was no way to determine if customers used them or if they improved the customer experience.

Rick was brought in as the CTO to lead TT’s efforts to rebuild their core platform. He believed that by using cloud computing for parts of their application they would be able to improve the customer experience and gain a competitive advantage by becoming more nimble. Rick led this effort with a small team for the first 18 months before being appointed CEO so the company could put all of its muscle behind his vision.

My colleague Jeff Barr did a great job of capturing the technical details behind TT’s journey. What I found interesting is the culture shift that Rick was able to accomplish. Rick’s experience adopting cloud was similar to those of several other executives that I’ve spoken to, as well as my own. He needed to influence change in the culture around him to succeed. He knew that the cloud was going to offer him an opportunity to make TT’s product better, reduce maintenance costs, become more nimble, and improve TT’s security posturing. Still, he had to convince everyone else.

“The idea of order data going to the cloud scared some of our customers”, said Rick. Not wanting to lose out on the opportunity, TT began to educate their customers on the improved security posture that can come from running applications in the cloud. Rick and his team stepped their customers through the architecture, all of the tools that AWS makes available to help secure applications, and how they’re encrypting everything on the platform. Additionally, TT explained that the security posturing that AWS is able to achieve far outweighs what they’d be able to do on their own. (Sounds a lot like a CIO Perspective on Security in the Cloud).

Convincing TT’s customers they were onto something required some effort, but it wasn’t the hardest part. Rick’s biggest challenge, he told me, was the internal culture change. As difficult as the Windows application was to manage, the company understood how to do it well. Getting the broader team to come on board took time. Many in the company had been in the financial services industry for many years, and had some of the same initial reactions as their customers. Rick said that by starting with their modest investment of a 12-person team and showing everyone the results — how easy they could affect change using continuous integration and have all users benefit immediately — was a major factor in winning everyone over. Developers that previously had to wait weeks or even months to see their feature make it to production were now getting immediate feedback. TT can now identify, in aggregate, how customers are using the platform, and can use this intelligence to release fixes and enhancements to the right users at the right time.

TT’s new platform officially launched last week, and I can tell that this is only the beginning. Rick was noticeably excited by all of the possibilities. And, TT is now able to experiment with new features, get feedback from customers, and improve their product much more quickly.

Rick had a vision, demonstrated the potential, convinced those around him, and executed. If that’s not a great example of leadership, I don’t know what is. Rick’s passion for his customers, products, and technology was obvious in our conversation. I have no doubt that this helped TT on their journey. Thank you Rick and team for spending time with us, and we look forward to seeing your business grow.