Although selling through computers has a long history, what we’ve come to know as ecommerce started in late 1994 with the release of Netscape Navigator, one of the original web browsers that led to widespread consumer use of the internet. Since then, ecommerce has become an ubiquitous form of shopping. It represents about 10% of overall consumer sales. During 2020, the pandemic accelerated ecommerce adoption and fueled further innovation to streamline shopping experiences, help people find products, and facilitate pandemic-related social distancing while shopping.

The History of Ecommerce

Because a historical perspective can be helpful to understand where the market is headed, let’s take a deeper look at the history of digital commerce. 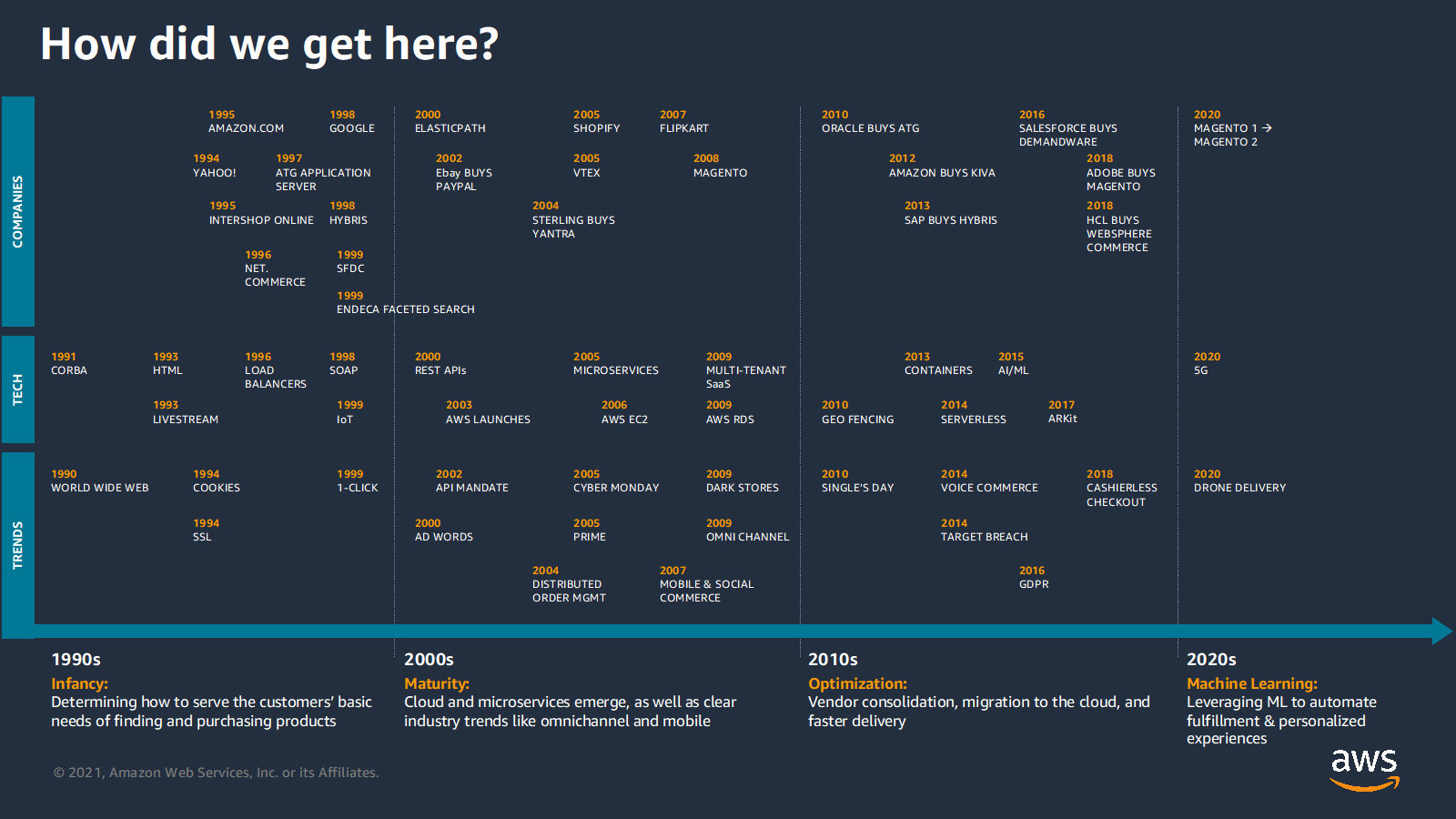 History of trends, technologies, and companies that have contributed to the rise of ecommerce. Some dates represent mainstream adoption and not necessarily invention.

In the late 1970s and ‘80s, people in online bulletin boards or small group discussion forums offered items for sale to other participants. The user interface was basic and not usually geared toward selling items. Because there wasn’t a standard form of payment, people had to figure out how to transact payments. This early form of ecommerce often involved a high degree of trust—someone put a check in the mail and hoped to receive their item.

In 1990, the World Wide Web was born. A few years later, HTML became the standard development language for websites. In 1994, Netscape Navigator, with Secure Sockets Layer (SSL) to secure online communications between the client and server, brought the Web to the masses. It opened the door to companies like Amazon and eBay. It also presented a new sales opportunity for mail-order retailers like Dell and Victoria’s Secret whose business models fit easily into an ecommerce paradigm.

Several vendors like ATG and Intershop entered the market, offering ecommerce platforms to help retailers build and maintain websites to transact sales. In this early stage of ecommerce, many early-adopter retailers were experimenting with technologies to enhance the customer experience. Amazon famously added ratings and reviews and, by the end of the decade, patented the one-click purchase. Meanwhile, in early 1999, Salesforce gave us a hint of what was to come with cloud computing.

By the late 2000s, ecommerce had gained momentum with consumers. It now included sales on mobile devices and social media, thus becoming “digital.” By this time, every chain retailer had an online presence.

In 2010, Oracle acquired ATG, one of the original ecommerce platform vendors. This kicked off a round of consolidation as large technology companies saw opportunities with ecommerce in the retail industry. Cloud computing went mainstream. Innovation increased capabilities and brought down costs, enabling many prominent ecommerce vendors to move to the cloud.

In 2013, Amazon first revealed plans for Amazon Prime Air, a drone delivery service, and in late 2016, Amazon successfully delivered its first Prime Air package in Cambridge, England. Amazon is working closely with the FAA to determine regulations for a widespread drone delivery service in the United States.

During this time, retailers began pushing the boundaries of privacy in the name of better customer service until the European Union introduced the General Data Protection Regulation (GDPR) in 2016. GDPR aims to give consumers more control over their personal data online. Meanwhile, cyber security became top-of-mind as the ecommerce websites of many large retailers were hacked, compromising the personal and credit card data of millions of consumers.

Now, at the start of a new decade, you might be wondering what’s next in the evolution of ecommerce. I’ve spent my career developing retail systems for several prominent technology vendors and working in leadership positions at many major retailers. These are the trends I see for the retail industry in the coming decade:

What you should do: If you’re a retailer, make sure your order management solution is flexible enough to support an array of fulfillment options so you can quickly add new delivery methods when they become available to consumers.

What you should do: As stores become fulfillment centers, make sure your stock room is large enough and optimized for robotics and other automation technologies that can streamline pick and pack processes.

What you should do: As consumers start to use apps and voice technologies to create grocery lists and purchase groceries, grocery store chains should be working as quickly as possible to develop and implement ecommerce strategies.

What you should do: Because data scientists will be too expensive for most retailers to have on staff, use data-driven ML-based technologies as a lower-cost alternative. You can also develop partnerships to tap into specialized data scientist expertise when required.

What you should do: You’ll need complex product photography to accurately represent products in 3D, so invest in your own photo studio or vet vendors who fit your style aesthetic and budget.

All retailers have come a long way since the early days of online bulletin boards and Netscape Navigator. AWS is at the forefront of every one of these trends. In a recent blog post, How to Implement a Digital Commerce Strategy in Retail, I provided a comprehensive overview of digital commerce for retailers and strategies to help you address your top priorities with digital technologies. No matter where you are in your digital journey, AWS can help you. Contact your account team today to get started.