*The Terraform Amazon Aurora module is in alpha state and will undergo significant changes. As of this writing, this module uses mainly the primary AWS provider. It’s expected to change to use the Terraform AWS Cloud Control Provider.

Before you start the walkthrough in this post, complete the walkthrough in Part 1. You will have provisioned an Aurora global database across two AWS Regions using the Terraform Amazon Aurora module, resulting in the following architecture: 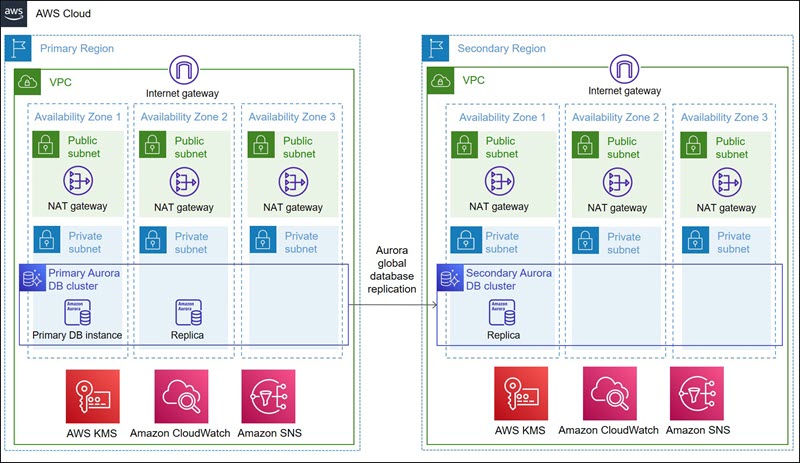 Scenario 1: Primary writer failover to another Availability Zone in the primary Region

This is the same failover method as provided by a provisioned Aurora DB cluster in multi-AZ mode.

Use this method—known as managed planned failover—only on a healthy Aurora global database cluster where all AWS Regions are operating normally. In the unlikely case of a disaster where a Region becomes unavailable, use the unplanned failover, described in the following section.

The unplanned failover method, also called detach and promote, assumes that your current primary AWS Region is experiencing a rare extended outage and that you need to quickly failover your database to the secondary Region. You manually remove a secondary Aurora DB cluster from the Aurora global database topology, immediately stopping the replication from the primary to this secondary and promoting it as a standalone Regional cluster with full read-write capabilities. After the impacted AWS Region’s operational state returns to normal, you need to add secondary Regions to your new primary Aurora DB cluster to recreate the global database topology.

In this walkthrough, you simulate the three failover scenarios on your Aurora global database cluster using the AWS Management Console and see the effects on Terraform state.

We recommend that you follow these simulations in order. This way, the Aurora global database topology (including the primary and secondary AWS Regions) ends up being exactly the same as the architecture you had initially deployed. If you do the simulations in a different order, you would have to perform a managed planned failover following an unplanned failover and recreation of the Aurora global database topology to relocate your primary Aurora cluster back to its original AWS Region. 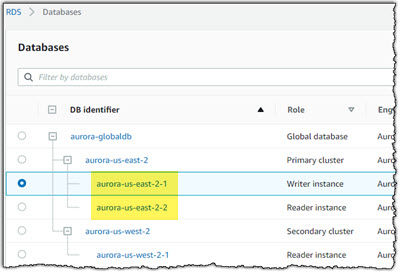 Terraform detects the DB instance role changes along with some other changes by comparing its state file with the actual state of AWS resources. 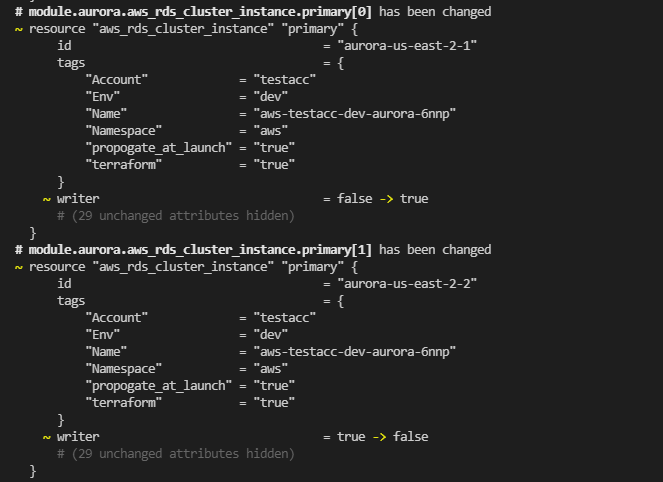 At the bottom, Terraform shows that there are no infrastructure-related changes required on AWS and provides an option to sync the Terraform state, as shown here:

Terraform relies on the contents of its state file to generate an execution plan to make changes to your AWS infrastructure. So it’s a good practice to keep your state file up to date to ensure the accuracy of the proposed changes when you change your Terraform config and apply. 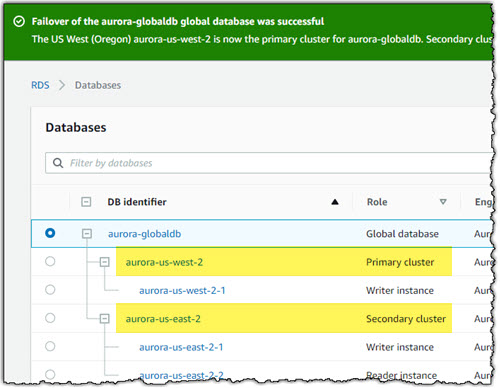 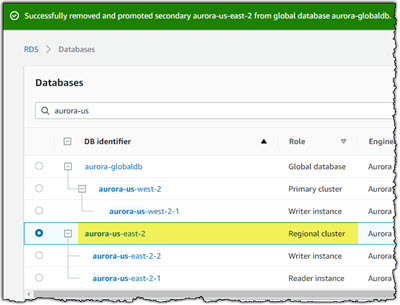 When the outage happening in your old primary Region (us-west-2 for this blog post) is over, you will add a secondary Region (us-west-2) to your Regional Aurora cluster in us-east-2 using Terraform to restore your global database topology. Do not run terraform apply at this stage. If you do, Terraform tries to add a standalone Aurora Regional cluster to an existing Aurora global database, which is currently not supported. To avoid this, you will first delete the old primary cluster in us-west-2 for Terraform to recreate this cluster as the new secondary. 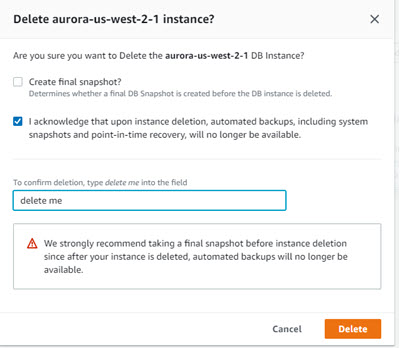 After all instances of the DB cluster are deleted, the DB cluster is automatically deleted as well. You should now have an empty Aurora global database (the size is now 0 clusters), and your Regional Aurora DB cluster is us-east-2, as shown here:

After the command executes, you should have an Aurora global database created with the primary Aurora cluster attached, as shown: 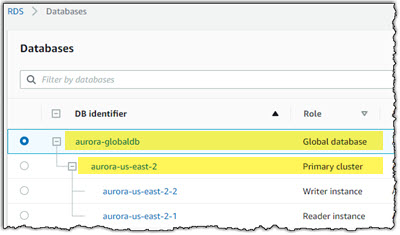 Certain resource arguments of the aws_rds_cluster Terraform resource—such as database_name, master_username and master_password—are applicable only when an Aurora cluster is set up as a primary. They need to be skipped when an Aurora cluster needs to be set up as secondary for a successful Terraform deployment. The setup_as_secondary variable, which is referred in the aws_rds_cluster.primary Terraform resource, controls this logic in the Aurora Terraform module. The default value for this variable is false. When the aws_rds_cluster.primary resource needs to be set up as a secondary instead of a primary, you need to set the setup_as_secondary variable value to true using the <TF_STAGING_DIR>/terraform-aws-rds-aurora/deploy/terraform.auto.tfvars file.

Now, you are ready to run Terraform to create your secondary Aurora DB cluster in the us-west-2 Region.

After the command completes, you should have the Aurora global database topology recreated, as shown:

Some of the AWS resources created by the Terraform Amazon Aurora module incur costs as long as they are in use. When you no longer need the resources, clean them up by following the cleanup instructions in Part 1.

In this post, we walked through three failover scenarios available for the Aurora global database, observed their effect on Terraform state, and discussed how to maintain the global database topology and configuration using the Terraform Amazon Aurora module, which is published by the AWS Infrastructure & Automation team.

By using infrastructure-as-code software, such as Terraform, you can save time for your AWS deployments and make sure that the resources across multiple AWS Regions are set up consistently in a repeatable and predictable manner. In the event of a Region-wide outage, your secondary AWS Region can take over the full read and write workload upon switching from your primary Region.

If you have comments or questions about this blog post, please use the comments section. To submit bug fixes or request enhancements, open a pull request or an issue in the Terraform Amazon Aurora module GitHub repository

Arabinda, a principal partner solutions architect specializing in databases at AWS, brings years of experience from the field in managing, migrating, and innovating databases and data platforms at scale. In his role, Arabinda works with AWS Partners to provide guidance and technical assistance on database projects, helping them improve the value of their solutions when using AWS.

Shayon is a principal database specialist solutions architect at AWS. His day job allows him to help AWS customers design scalable, secure, performant, robust database architectures in the AWS Cloud. Outside of work, you can find him hiking, traveling, or training for the next half-marathon.