There’s a new way for you to act on information discovered by AWS IoT Device Defender audits. Now you can create mitigation actions for audit results that automate a response to alerts from an audit.

AWS IoT Device Defender customers often say that it’s invaluable for how AWS gives them visibility into potential malicious device activity. You can do the following:

·      Detect unusual activity by monitoring the behavior of your devices

Using the auditing capability of AWS, you can reference a report in the AWS IoT dashboard of all non-compliant devices. If a device becomes non-compliant, you receive an Amazon SNS notification.

This post describes how you can now select default mitigation actions. At the same time, you can still create a custom response using SNS. To see possible mitigation actions, look at an example alert scenario.

Overview
When you go to the AWS IoT Device Defender console, the first thing that you notice is a new tab under Defend called Mitigation actions. To create a new mitigation action, choose Create.

Now, run a test. In this example, suppose that there are two connections open simultaneously with the same authentication certificate. This could mean that a device is provisioned incorrectly, or that a bad actor is in control of a device or its key pair.

Usually, your default is to disable the certificate immediately until you determine what’s happening. However, because there is a chance that there’s simply a bug on the device, you don’t want to delete the certificate. So what do you do?

While drilling down into the results of an audit on the Audits results page, you notice that you have one non-compliant certificate that is shared.

When you choose On-demand, you see the details of the audit findings, as shown in the following screenshot. 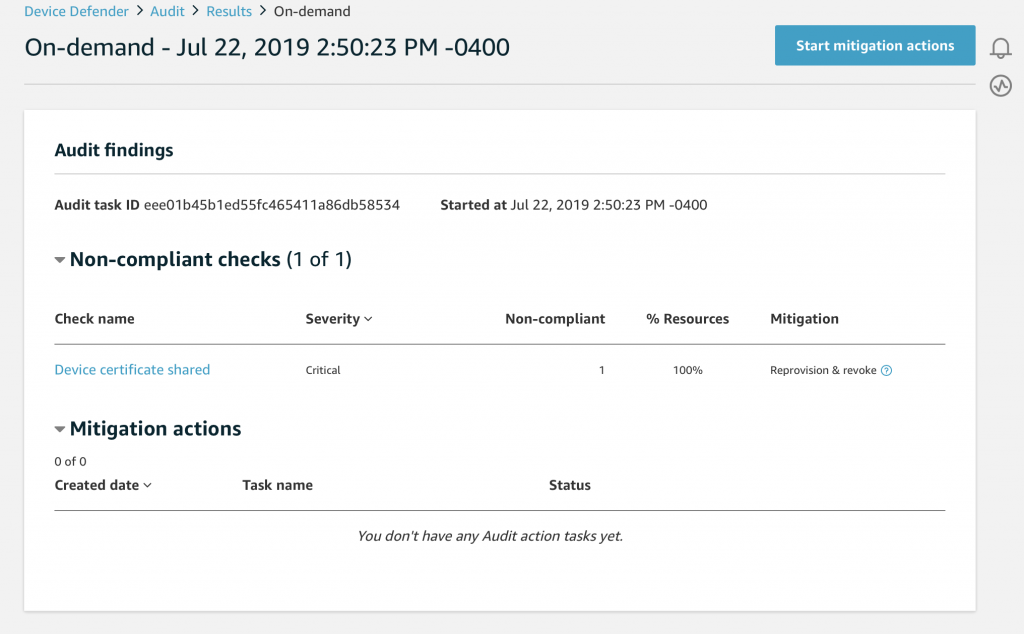 Before mitigation actions, you had two options:

To correct this issue, choose one or more mitigation actions. You can even choose Select all to perform all the actions simultaneously. You’re done!

Conclusion
You can see how the new mitigation actions offer a quick and easy way to perform remediation against common IoT security issues. Mitigation actions are now available in all Regions where AWS IoT Device Defender is available.