Note, you can also create, monitor and manage Alarms directly in AWS IoT Events, independently of AWS IoT SiteWise. To learn more about this, please see Monitoring with alarms in the AWS IoT Events Developer Guide.

To create an alarm for any incoming equipment data, there are three high level steps:

To illustrate, we use a real-life application example of Clean-In-Place (CIP) systems. CIP systems are used in manufacturing facilities that produce food & beverages, biotech and pharmaceutical products to clean equipment without disassembly (i.e. “in place”) to neutralize flavors and clear any residues from previous cycles. For efficient cleaning, plant operators need to maintain prescribed temperatures for cleaning fluids such as caustic liquid. In our example, we will monitor the temperature of caustic liquid using Alarms and raise notifications when the temperature falls below a pre-set threshold. 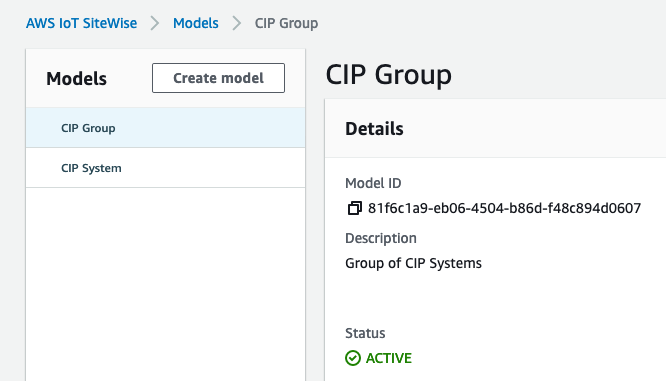 Next we define some measurements (e.g., raw data from sensors) relevant to the CIP Systems asset model, as shown in the following image. They represent tank and temperature levels for tanks containing different types of cleaning fluids.

In the CIP System asset model we also created an attribute Caustic Temperature Threshold to store a temperature threshold value of 40 °C. We use this attribute value later when creating the alarm to monitor a tank’s temperature.

Having created the asset models, we now create the assets themselves. The CIP Group asset represents a grouping of multiple CIP systems, based on a common criteria such as location. We also create two CIP system assets CIP System 1 and CIP System 2 and add them under the asset CIP Group. While such grouping is not required for the creation of Alarms, we are doing so to organize our assets aligned with real-world scenarios.

The CIP system assets in AWS IoT SiteWise need to get data from actual CIP systems. This often uses OPC-UA a communication protocol for industrial automation applications. OPC-UA data is organized as aliases and these need to be mapped to each of the assets’ measurements. For more details on this process, please see the mapping industrial data streams documentation. Once this is done, data starts streaming into the CIP system in AWS IoT SiteWise.

So far, we’ve modeled our CIP system, instantiated virtual CIP system assets, and started streaming data directly into each asset from their OPC-UA servers. Now, we define alarms for when our CIP systems’ operating parameters fall out of control bounds.

As we start, the asset model has no alarms defined yet. 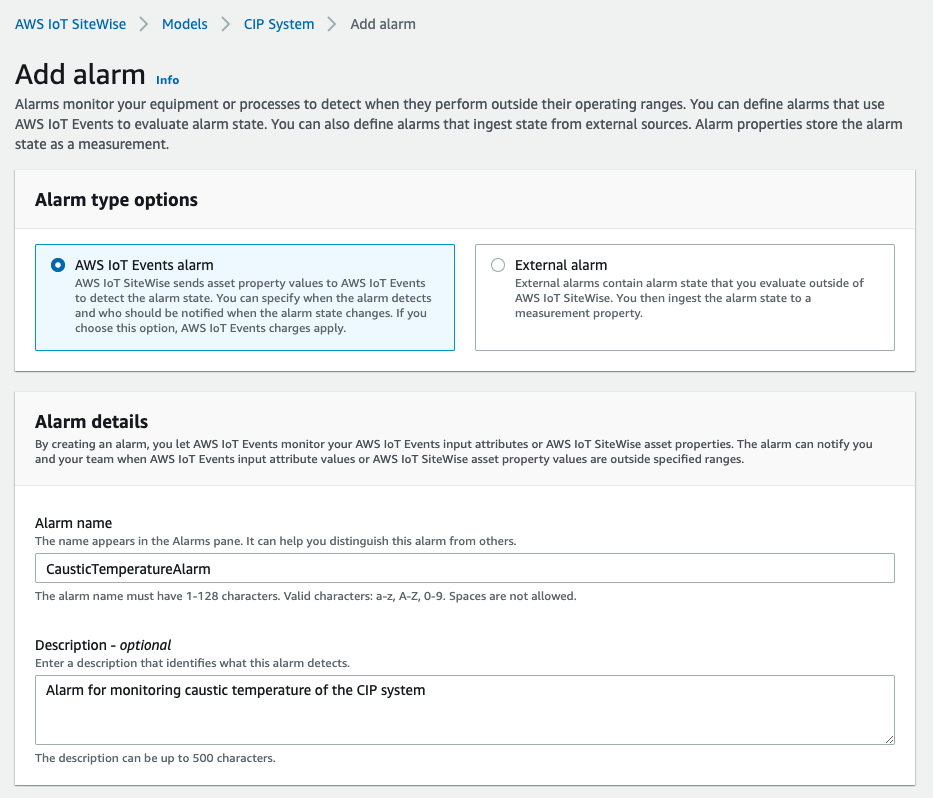 The threshold definition for the alarm specifies when to trigger the alarm, based on the value of a property meeting a specific condition. For CIP systems, it’s important for the fluid in the caustic tank to be at a temperature higher than 40 °C, so we set up the threshold for when the Caustic Tank Temperature is less than the Caustic Temperature Threshold. You’ll recall that Caustic Temperature Threshold was created earlier and set to 40 °C (see Creating Asset Models above).

Optionally, you can also configure email and text notifications for this alarm. Note that the AWS Single Sign-On service must be enabled and the users added in the current region for them to show up as valid destinations.

In addition to email and text notifications, to integrate alarm notifications with your own ticketing systems, you can also configure actions to other AWS services such as AWS Lambda, Amazon Simple Queue Service (SQS), and Amazon Simple Notification Service (SNS), to be executed when an alarm triggers. For example, you can call an AWS Lambda function to trigger and cause an update to a ticketing system, and also update an Amazon DynamoDB table. You can find details of all supported actions here.

In our example, we send both email and text notifications. 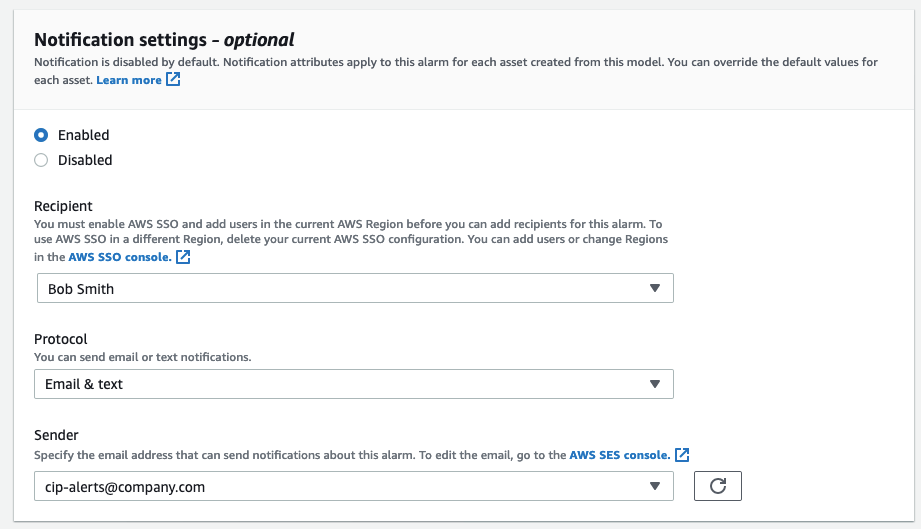 We’ll set the Default asset state as Enabled and save the alarm by clicking Add alarm. The Enabled state ensures that all assets created from this asset model will have this alarm evaluated by default.

The CausticTemperatureAlarm alarm can now be seen in the Alarm definitions tab of the CIP System asset model page.

We can now see the alarm and its status in the Asset details page. The caustic tank temperature is within normal limits, so the status is shown as Normal. 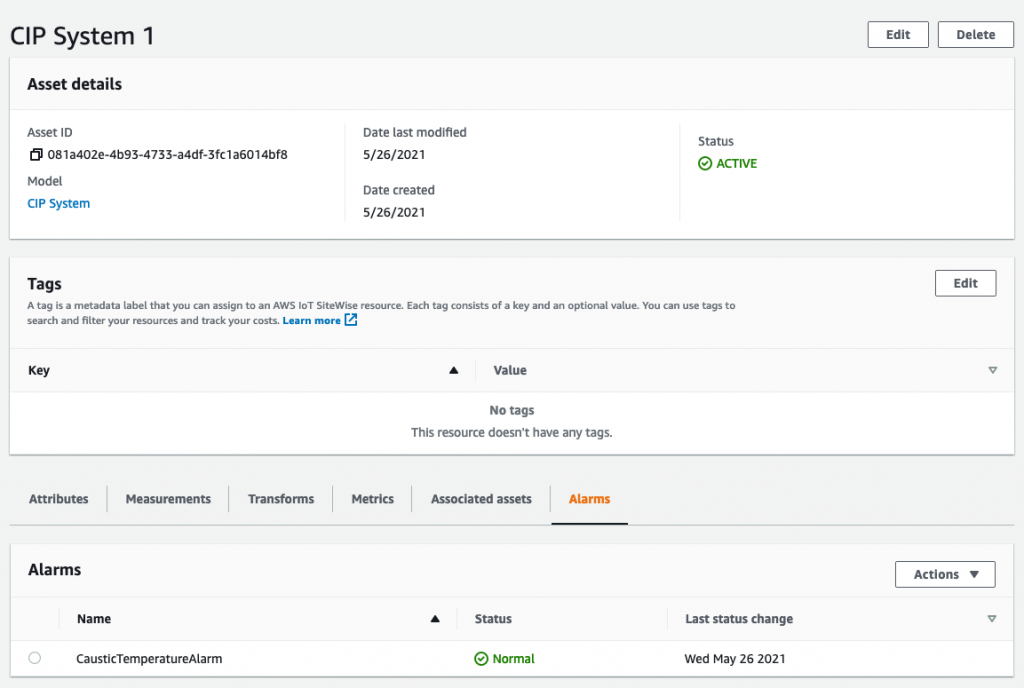 Next, to demonstrate an alarm being raised, we cause CausticTemperatureAlarm to trigger. We’ll do this by varying the caustic tank temperature, using simulated input values. We do not cover this simulation method in this blog. 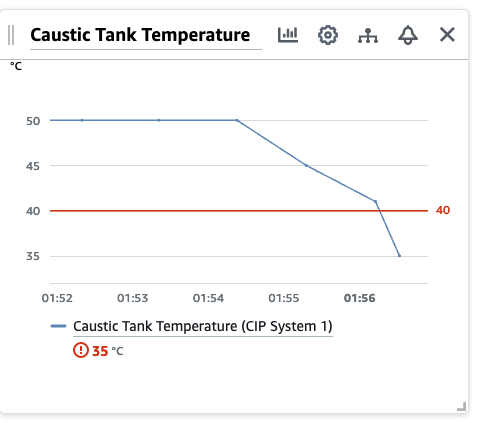 The Asset details page now shows an Active alarm. If notifications were set up, those would have triggered as well.

The Actions button shows your response options for Active alarms. You can Acknowledge the alarm indicating receipt, Snooze it for a period (after which the alarm returns to active), or Reset it. In a typical industrial process, an operator sees the alarm, and then acknowledges it to indicate the start of the problem identification and resolution process. We will mimic this workflow and Acknowledge the alarm. For more details on the alarm lifecycle, see the documentation section on Alarm states. 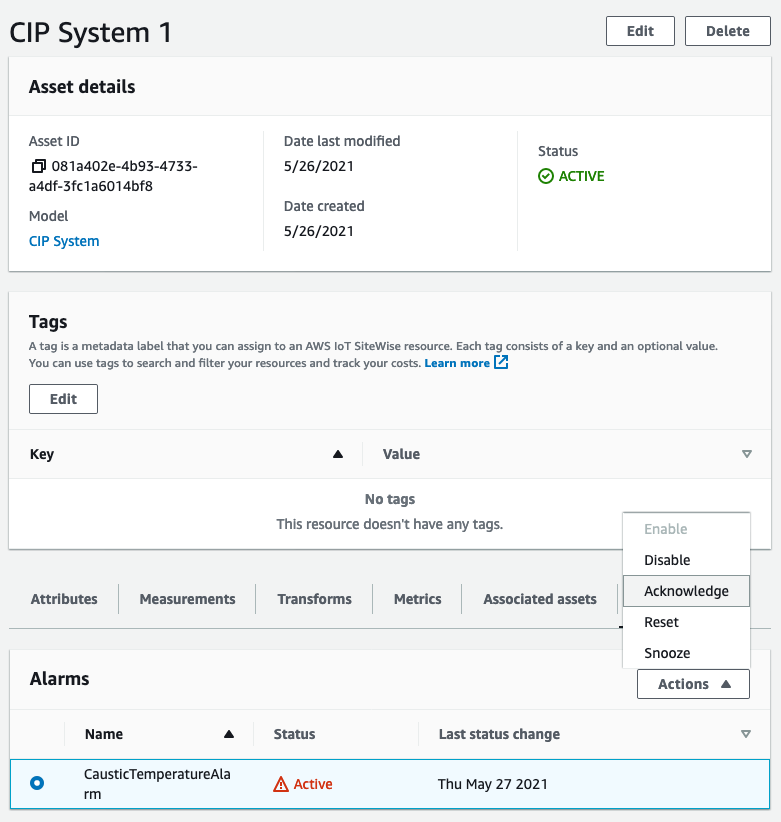 Once the alarm has been acknowledged, the alarm status changes to Acknowledged. The operational team is thus made aware that the alarm is being investigated. For more details on the other options and the alarm lifecycle, see the documentation on Alarm states.

With the Alarms feature, process industries can use automatic monitoring and alerting so operational teams can stay continuously focused on meeting quality and productivity goals.

Get started with Alarms by going to the AWS Management Console and navigating to AWS IoT SiteWise.