Using Amazon Rekognition to detect celebrities in an iOS app

Picture yourself watching a movie or TV series. You see an actor on screen that looks very familiar, but you just can’t seem to remember their name or where you’ve seen them before. Today, if you’re watching an Amazon Prime Video, you get a neat feature called X-Ray, which identifies the actors on screen and provides handy links to their IMDb profiles. What if you could build similar functionality in your own mobile app and point your phone at whatever you’re watching to detect celebrities?

In this walkthrough, we build a sample iOS Swift app that lets you snap a photo with your phone camera, and uses Amazon Rekognition to identify faces and celebrities in the picture, with links to additional information about the identified celebrity. Amazon Rekognition is an AWS service that enables you to easily add intelligent image and video analysis to your applications.

The app we’re building in this walkthrough showcases features of the Amazon Rekognition API—such as celebrity detection, result confidence, face detection, and face boundaries. This solution is an iOS app that’s written in Swift, but you can easily extend the underlying concepts to other mobile platforms. The final solution app code (san your credentials) is available from this GitHub repository.

Here’s what the completed iOS app looks like in action.

Step 1: Set up permissions for calling the Amazon Rekognition API

The next step is to create a role and attach an IAM policy to this role that gives access to the Amazon Rekognition API.

To do this, you edit the IAM policy on the Your Cognito identities require access to your resources page. Choose View Details, choose View Policy Document, and then choose Edit. You do this for the unauth role, but you can also do the same thing for the auth role if you’re going to use the app as an authenticated user.

The starter app comes with the basic code for capturing a photo and displaying an image. This allows you to focus on the components that are related to Amazon Rekognition straight away.

To begin, download or clone the iOS celebrity app from this GitHub repository.

The starter app includes the basic plumbing for capturing a picture using the device camera, or selecting a photo from the device photo library. It also includes components that can load a webpage inside a Safari-based webview.

Also, the starter app includes a Celebrity.swift class that’s used to create a Celebrity object for each ‘face’ that’s identified in the provided image. This object uses results from the Amazon Rekognition API to populate its properties and identify the location of each identified ‘face’ in the image. In particular, it uses the bounding box data for each face that’s identified in the image, and draws a button at the position of the face. Choosing the button takes you to a webpage for the celebrity that’s loaded within a Safari web view.

1. We use CocoaPods to set up the AWS Mobile SDK for iOS dependencies. Go to the pod file in the project directory and enter the following under #Pods for <project name>: pod ‘AWSRekognition’

2. Open the Terminal app, and then change directory to the location of the unpacked files from the previous step.

4. If you go to the Pods folder in your project, you should now see the pods AWSCore and AWSRekognition there. These are the AWS Mobile SDK components that enable you to talk directly to Amazon Rekognition. You can also see that a new workspace file was created for this project.

Step 4: Set up credentials for the AWS Mobile SDK

Having set up the Amazon Cognito identity pool with the required role and policy to access the Amazon Rekognition API, we now provide these credentials to the AWS Mobile SDK for iOS in the app.

4. In the app’s didFinishLaunchingWithOptions function, add the following lines:

This section is at the core of what we’re trying to accomplish—talking to the Amazon Rekognition API to detect faces and celebrities in images that are captured by the app.

1. At the top of the ViewController.swift file, add the import line…

2. Create a class variable of type AWSRekognition. We use this to talk to the Amazon Rekognition API.

3. Go to the sendImageToRekognition function, and add the following lines after the snippet to ‘Delete older labels or buttons’:

In this code, we first initialize the rekognitionObject with a default configuration. We then create an instance of AWSRekognitionImage and assign the bytes property, which is the image data that’s captured by the camera or chosen from the photo library. Next, we create an AWSRekognitionRecognizeCelebritiesRequest, and assign the chosen image to the image property of the request.

1.  Add the following lines to the sendImageToRekognition function after the lines in the previous step: 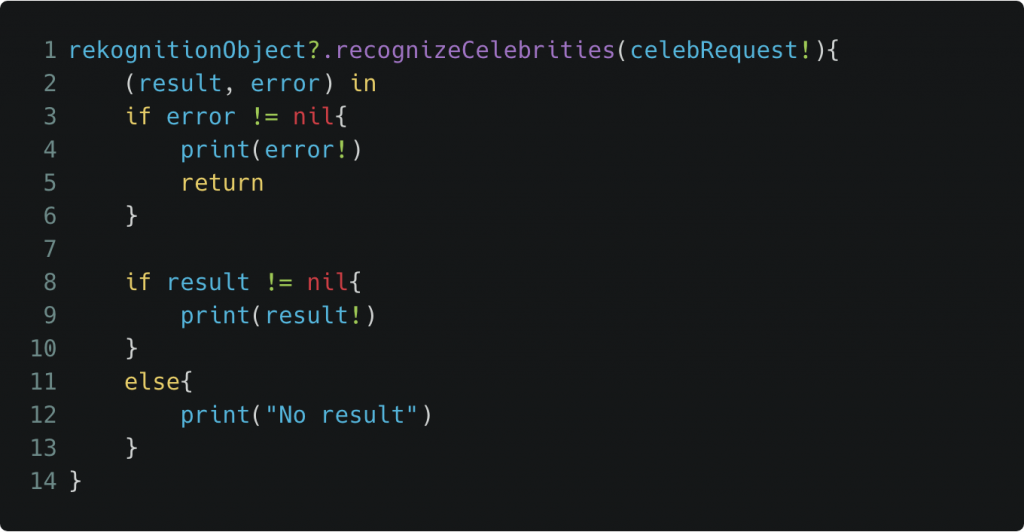 2.  Inside the if statement for result != nil, add the following lines to extract celebrities and faces from the Amazon Rekognition response. Review the code comments to get a better understanding of each task. 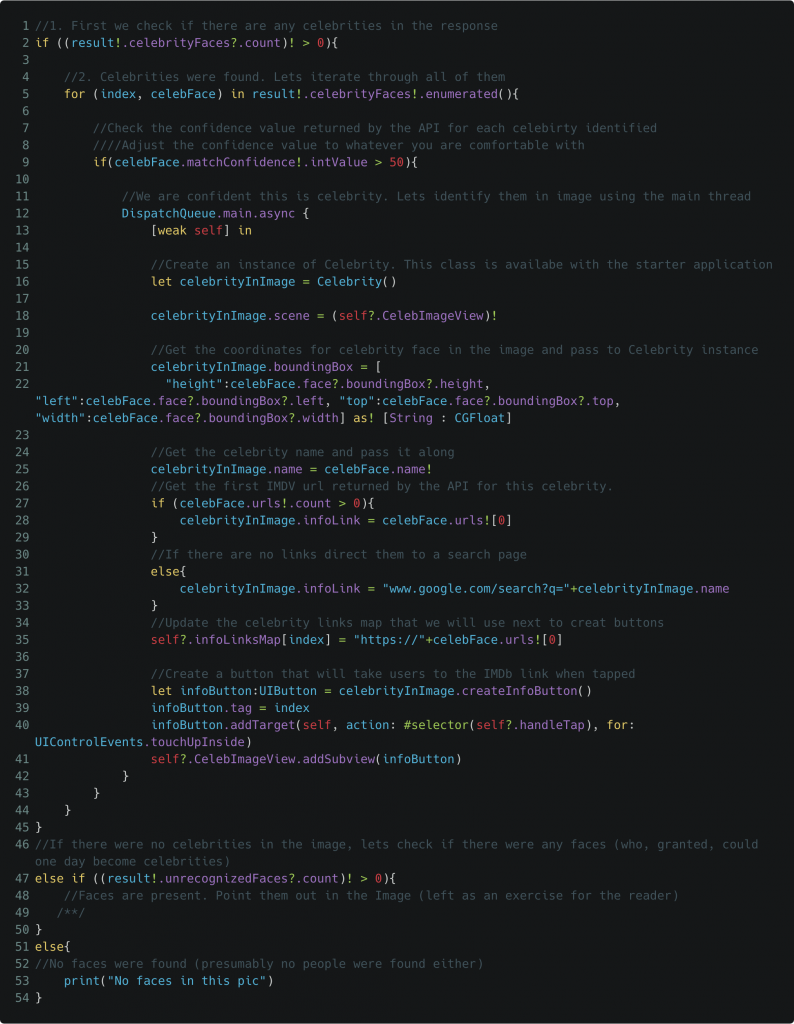 Let’s quickly walk through what we did:

That’s it! The hard work is done and it’s now time to try out the application. Build the app to your device and confirm that the app is working and making calls to Amazon Rekognition. If you have a clickable “Jeff Bezos” label for the celebrity in the image, the app is working! Now go ahead and snap a pic of a celebrity on your TV screen, in a magazine, or in person. If everything works, you should see a label on the face in the image that Amazon Rekognition has identified as a celebrity. Clicking on the identified celebrity takes you to the celebrity’s IMDb profile page. Note that the app supports a camera image or an image from the phone’s photo library.

As always, we’d love to hear from you. Please file issues in the GitHub repository for this sample.