The AWS CloudFormation team has been busy in the last couple of months, adding support for new resource types for recently released AWS services. In this post, I take a deep dive into using AWS Glue with CloudFormation.

AWS Glue was first announced at re:Invent in 2016, and was made generally available in August 2017. AWS Glue is a serverless extract, transform and load (ETL) service. ETL is a critical step in operationalizing data analytics, since data cleansing and reformatting is almost always necessary when creating everything from data marts, warehouses, data lakes, machine learning algorithms, metrics dashboards, operational reports, and many other data science projects.

Data science projects can be very time-consuming from an experimentation and discovery perspective. When a promising candidate project emerges, implementing the necessary production compute and storage resources can cause significant delays. It’s necessary that the business leverage the resources in a repeatable and ongoing basis.

Your company wants to pursue a new service relating to cryptocurrency analysis, and your IT team gets asked to produce a database with historical price information for bitcoin, to feed other analysis processes. Rather than require a significant upfront investment in building the database and the necessary tooling for ongoing analysis and model development, you can leverage AWS Glue and open source development tools like Apache Spark, Python and Apache Zeppelin to enable quick experimentation and further product development. Further, you want to automate the operationalization of this data analysis platform as quickly as possible, and AWS CloudFormation helps with this automation.

Start with getting historical bitcoin price data. You can choose to consume the data directly from currency exchanges, or you can find an existing dataset that includes past data. There are many sources of public data sets for such projects, as outlined in 18 places to find data sets for data science projects. One of my favorite sources for such data sets is Kaggle, where you can also learn from other scientists’ projects and findings, as well as participate in data science competitions sponsored by companies and academic institutions.

The dataset from the Bitcoin Historical Data page will fit our needs (see Figure 1 below); it includes historical data from January 2012 to today, from several exchanges.

Figure 1. A sample of the CSV data provided for the coinbase exchange.

Setting up our Bitcoin Price Database

Armed with this data, now get the data to a point that you can inspect it, query it, and plan for further development and experiments.

Figure 2. The CloudFormation template for the AWS Glue crawler from bitcoin data.

You set up everything with CloudFormation early in the process, so eventually operationalizing the solution in a production environment becomes fast and repeatable. The template helps you:

Note the following from the template code:

After creating the stack, which should take about 40 seconds, check the AWS Glue console where your database and crawler show up on the respective lists immediately. After the crawler runs (in about 5 minutes, per your scheduled cron expression), the table also shows up. After the table creation is complete, you can view the schema from the AWS Glue console (see Figure 3), or execute SQL queries against it using the Athena console (see Figure 4). 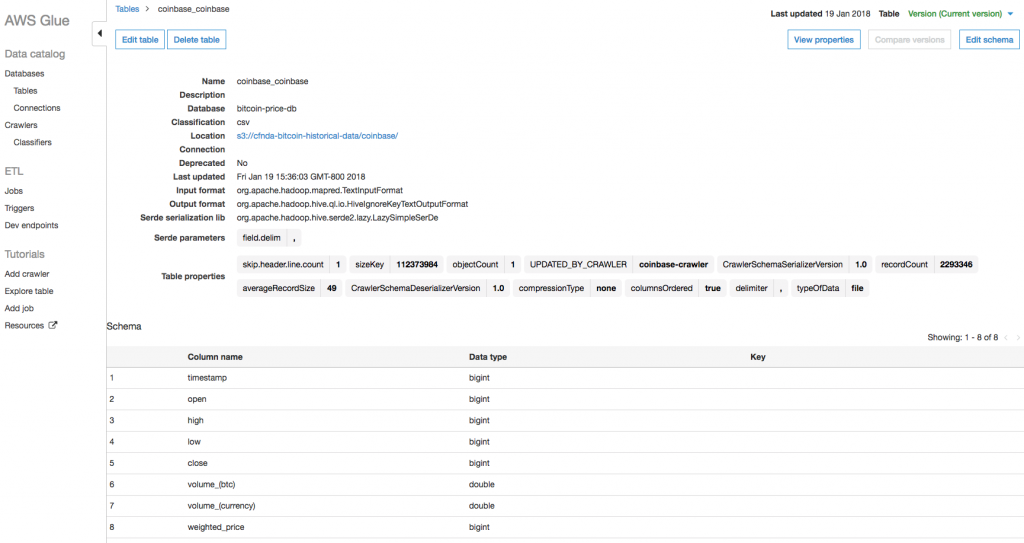 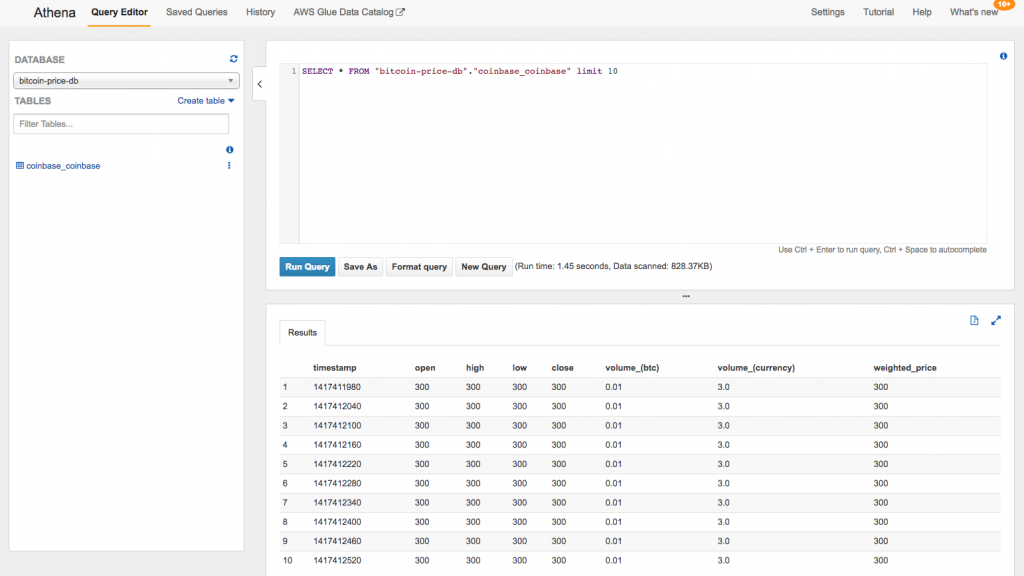 Now that you’ve figured out how to ingest the data to a place where you can query it, you can begin to compare the data with other exchanges from the dataset. You can also merge it with other data, reformat the data to make it easier to consume, and further enable data experiments.

For example, maybe you want to merge the data with other events or logs, but those events lack enough structure to build tables from them and join them with your existing tables. Using AWS Glue classifiers, you can use grok expressions to add structure to these additional data sources.

Another example that considers the current data schema would be transforming the UNIX time format field to a conventional date field. AWS Glue allows for the creation of jobs that can do such transforms on fields. It also allows you to use PySpark (Python-based Spark scripts) to do such transformations. You can later operationalize those scripts as jobs in AWS Glue, and have them run periodically or based on a trigger, perhaps to get updated data.

You can write and debug your own scripts, from your local IDE, by creating development endpoints in AWS Glue. Further, you can develop scripts and conduct experiments using Apache Zeppelin notebooks, deploying a server with the Zeppelin software ready to use. Not surprisingly, AWS Glue uses CloudFormation to deploy these Zeppelin servers. For more information about setting up your local IDE, see Tutorial: Set Up PyCharm Professional with a Development Endpoint to link your AWS Glue endpoint with JetBrains’ PyCharm Professional, or see Tutorial: Set Up an Apache Zeppelin Notebook on Amazon EC2 on how to create a Zeppelin notebook server on an Amazon EC2 instance right from the AWS Glue console, using CloudFormation to deploy the server.