When you run an application on multiple Amazon Elastic Compute Cloud (Amazon EC2) instances, you want to avoid differences between the instances because they can cause unpredictable behavior and make it hard to troubleshoot and solve issues. The best way to prevent differences is to replace your instances whenever you want to make a change—to create, in effect, an immutable server. Although this approach sounds simple, you might have questions about how to do this in a practical way.

In this blog post, I will answer the following questions:

To illustrate the concept of an immutable server, I will show you how to use EC2 Image Builder and AWS CodePipeline to create a pipeline that builds and deploys fully installed AMIs. In this post, I assume you are familiar with Amazon EC2, Amazon Simple Storage Service (Amazon S3), AWS CloudFormation, and AWS CodePipeline.

What problems do immutable servers solve?

Here are some (fictional) examples of production incidents related to unintended differences between EC2 instances:

Each of these incidents is related to differences between EC2 instances. In the first example, one instance is misconfigured due to human error. In the second example, the difference is that the new instances do not have the software installed yet. External installation dependencies during system startup increase the risk of failure and slow down the startup. In the third example, there is no mechanism to reproduce an exact replica of production.

Immutable servers can help prevent these issues. When you treat instances as immutable, they will always be exact replicas of their AMI. This leads to integrity and reproducibility of the instance. When you ship fully installed AMIs, you have no more installation dependencies on startup, so there is no more risk of installations failing at the worst possible time. Shipping fully installed AMIs also reduces the time it takes to add capacity to your fleet because you don’t have to wait for the installation to finish.

It’s not a silver bullet, though. For example, the root cause of the third issue might be outside the EC2 instance. It might have originated in the data store or in an underlying service. From the example, you can’t tell with certainty. With an immutable server, though, you can at least rule out differences between EC2 instances as a suspect.

The dos and don’ts of immutable servers

What makes immutable servers different from the regular ways of managing EC2 instances? Perhaps you have adopted a few of these best practices already.

When you follow these practices, you can say that you have adopted the immutable server pattern. Now I’ll walk you through the steps to set up a pipeline that creates fully installed AMIs.

How do you build immutable servers?

Figure 1 shows an architecture for the build process. 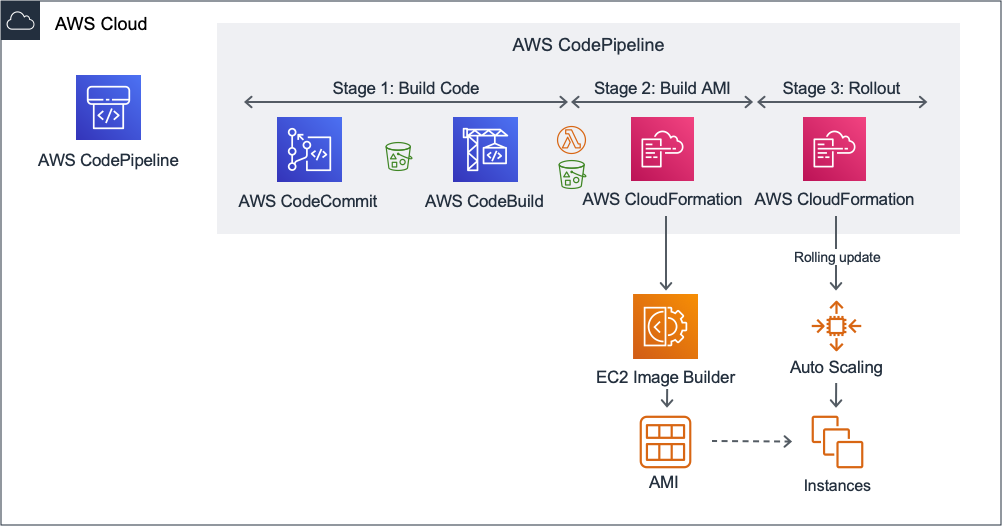 This diagram was created with the assumption that you own the source code for the application and that you make regular changes that must be compiled first. If that is not the case, you can skip this step and store installation files in an S3 bucket.

If your organization uses Atlassian Bitbucket or GitHub instead of AWS CodeCommit, you can edit the pipeline accordingly.

Stage 3: Deploy the image to your test environment using a rolling update

In this final stage, CodePipeline applies a second CloudFormation template. This template performs a rolling deployment using an EC2 Auto Scaling group. A rolling deployment removes an old instance only after creating a new instance to avoid downtime. The Auto Scaling group represents your development environment. This template is separate from the previous CloudFormation template to make the solution modular. If you want to extend the pipeline to deploy to more environments, you can replicate this deployment mechanism.

Set up a build pipeline for fully installed AMIs

In this section, I will show you how to deploy an example pipeline that builds fully installed AMIs based on source code in CodeCommit.

To create resources for this use case:

To see the pipeline in action:

Note: Expect the pipeline to take 30-45 minutes to run all steps. It takes 25-30 minutes to build an image and 5-15 minutes to deploy it. The deployment takes longer on subsequent runs when CloudFormation performs a rolling deployment.

Now you have built a pipeline to create fully installed AMIs in a repeatable manner to use them as immutable servers. For more detail on this example pipeline, see the source code and documentation in the AWS Samples repository on GitHub.

Clean up the pipeline

To delete the AWS resources created by CloudFormation:

To delete the S3 bucket used by CodePipeline to store artifacts:

To clean up a variable in the SSM Parameter Store created by the Lambda function:

In this FAQ, I answer common questions about immutable servers.

Q: How do I keep my EC2 instances patched and up to date?

A: Replace your EC2 instances with a newly built AMI that contains all the latest versions of software. Do this frequently to stay current with the latest patches.

Q: How do I handle configurations that change frequently?

A: A fully installed AMI means that part of your configuration is built into the AMI. Not all configuration can be included, though. Some configuration parameters might change multiple times a day (for example, a parameter that refers to systems that are launched and terminated by EC2 Auto Scaling groups). Use service discovery tools to manage these parameters outside of the AMI. Think of tools like AWS Systems Manager Parameter Store, AWS Cloud Map, and AWS App Mesh.

Q: How do I keep anyone from making changes on the EC2 instances?

A: The best way is to deny terminal access to any administrator. When you follow the immutable server pattern consistently, there is no need to sign in to EC2 instances.

Q: Can I have a break-glass mechanism for terminal access to instances just in case?

A: Although the immutable server pattern is strict on the no-change policy, in exceptional cases you do need to sign in to an EC2 instance (for example, to perform forensics after an incident). For cases like these, I suggest you build a break-glass mechanism.

Q: How can I find out what is happening on my EC2 instance without signing in?

Q: How can my Internal Audit department track all changes to EC2 instances?

A: Immutable servers have a high degree of traceability. You can only change an application by pushing code to the Git repository. The application code and installation scripts are managed in Git. The pipeline traces all the automated steps, from source control to the EC2 instance that’s deployed. To illustrate this, the example pipeline built in this blog post tags EC2 instances with the Git commit ID and the commit message.

Q: Can I use Windows Server instead of Linux?

A: Yes. If you want to treat Windows instances as immutable servers, replace the bash scripts with Windows PowerShell scripts. A prerequisite is that software must be installed through scripts, command line tools, or unattended/silent installations.

Q: How do immutable servers work with stateful workloads?

A: You can follow many of the same practices with a few caveats. If the architecture supports it, you store the state in a managed service like Amazon ElastiCache for Redis or Amazon DynamoDB, effectively making the workload stateless. If that is not feasible, the application should store its state on a separate Amazon Elastic Block Store volume dedicated to the application data. Edit the deployment step in the pipeline to start a custom process that unmounts the data volume from the original instance and then mounts it to a newly created EC2 instance.

Q: How do I safely promote an AMI to subsequent environments?

When you treat your EC2 instances as immutable servers, you get a repeatable and reliable process for creating instances. You reduce the risk of human error and the risk of inconsistencies in automated installations. When you need to resolve an issue, you can rule out environmental differences as a potential cause, at least as far as the EC2 instance is concerned.

Immutable servers require a different way of working. You need a mechanism for creating fully installed AMIs and rolling them out across environments. In this blog post, I showed you how to launch a pipeline in CodePipeline that orchestrates the entire process—from source control to an up-and-running development environment.

The immutable server pattern is commonly adopted in the world of containers. There is nothing stopping us from doing the same with EC2 instances!

With special thanks to Samartha Chandrashekar, Kimberly Chow, Kevin Dejong, Juha Knuuttila, Tim Power and Rohit Satyanarayana for the extensive review and feedback.