In June 2022, we announced AWS Cloud WAN in general availability, a managed wide area networking (WAN) service that makes it easy for you to build, manage, and monitor a global network connecting your resources across your AWS Regions and on-premises environments. With Cloud WAN, you have a central place to create and manage your global routing configuration by creating a policy, and achieving traffic segmentation between resources in several Regions.

Alongside the general availability announcement, we also announced the ability to peer Cloud WAN with AWS Transit Gateway. Although it may seem that Cloud WAN can simply be used instead of Transit Gateway, there are different use cases where it may make sense to have both together and simply peer them:

When peering Cloud WAN with a Transit Gateway, the following resources are needed:

In this example, we have two networks in the North Virginia (us-east-1) and Ireland (eu-west-1) Regions, each of them with two different routing domains (Prod and Non-Prod) configured as Transit Gateway route tables – as shown in the following figure. The end goal will be peering the Transit Gateways to Cloud WAN’s core network to achieve native traffic segmentation between the routing domains. 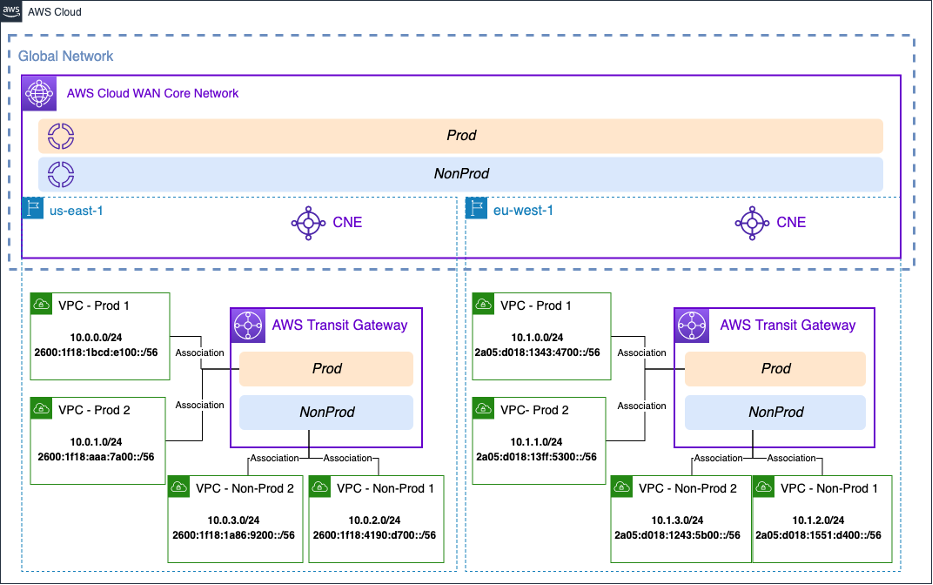 For this walkthrough, we’ll use only the AWS Management Console, although you can also use the AWS Command Line Interface (AWS CLI) or AWS SDK. If you want an example of how to create a similar architecture using Infrastructure-as-Code (IaC), then check the following aws-samples repository on GitHub. We’ll only show the configurations required to create the resources in the us-east-1 Region, but note that the same steps will be needed to create the resources in the eu-west-1 Region. We’ll proceed as follows: 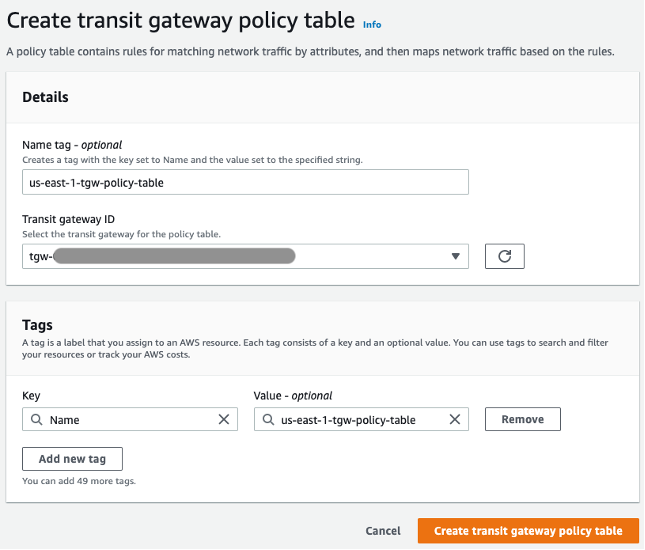 Remember to also create the policy table for the Transit Gateway in eu-west-1. 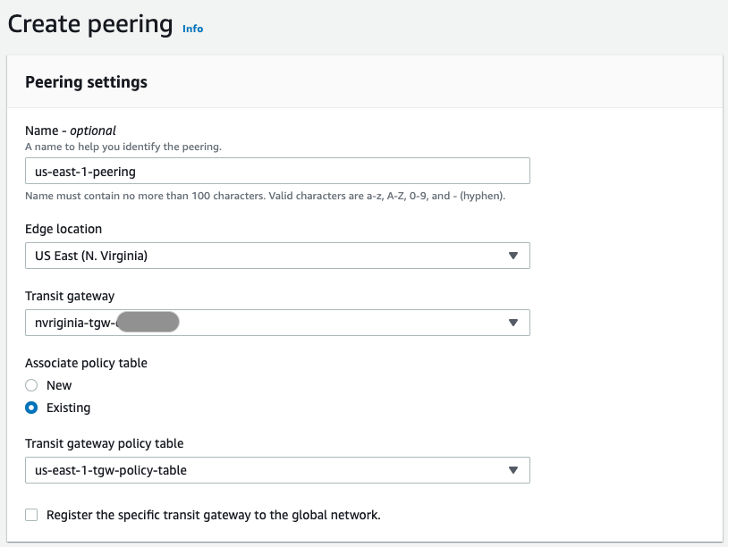 As you can see in the previous figure, when creating a peering connection from the console, you can also configure the following:

When you create the peering, if you selected the creation or association of the policy table, then you’ll see the following. Allow the workflow to complete before proceeding.

Remember to also create the peering connection between the Transit Gateway in eu-west-1 to the core network.

Once our peerings are created, and the policy tables are associated with those attachments, we can proceed to create the Transit Gateway Route Table attachments. These attachments will extend a specific Transit Gateway route table to a Core Network’s segment, and we’ll achieve the segmentation that we’re looking for.

From the Network Manager console, under the “Core network” tab at the left-hand side, you can move to the “Peerings” section to create the peering connection. We must create two attachments per Region – one for Prod and the other for Non-Prod traffic. 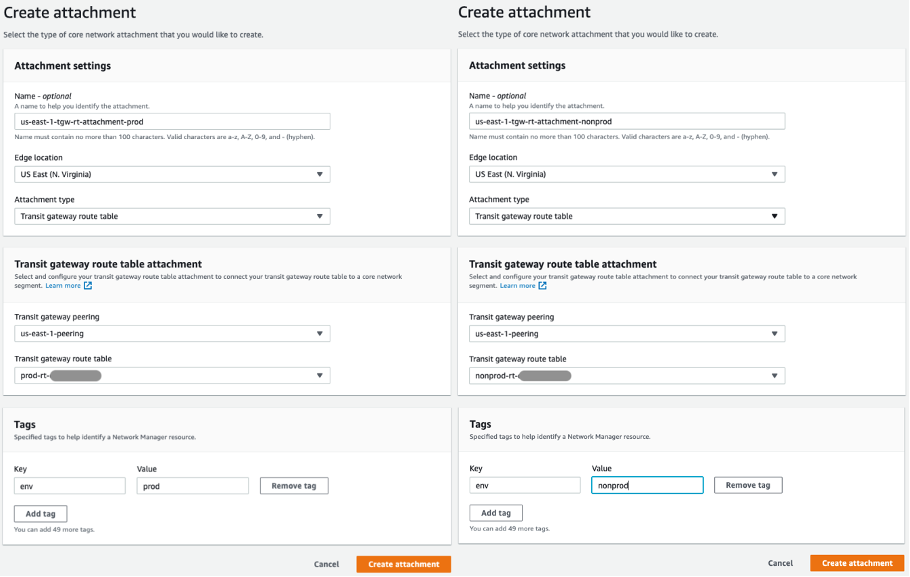 Note the creation of the tags in the attachments. Checking the “attachment-policies” section in the Core Network’s policy (shown in the following), we automate the association of attachments to the segments if this attachment contains a tag with the format: key = “env” and value = “prod”/“nonprod”. Therefore, when the attachments are created, they will automatically be associated with the specific segment, and the network will be updated automatically, as shown in the following figure. Note that you can also specify if attachment acceptance is required prior to the network update.

Remember to also create the Transit Gateway route table attachments in eu-west-1. With this, the peering connectivity between Cloud WAN and the Transit Gateways is done, and we can proceed to check the dynamic exchange of the routes. In the following figure, you’ll see the final status of our architecture, with the resources created highlighted with arrows. 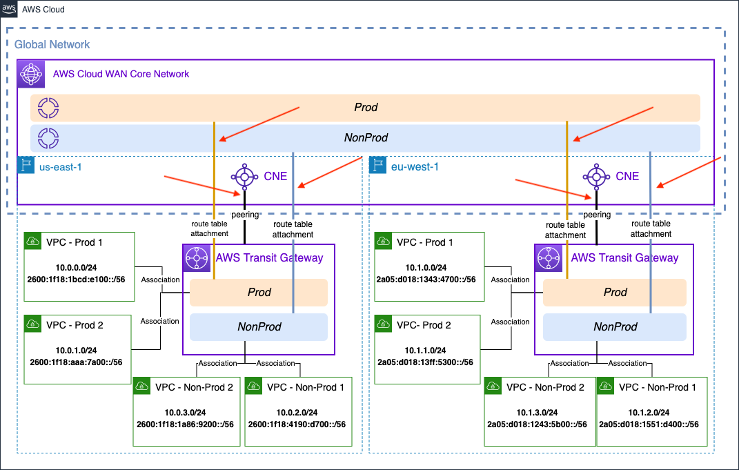 To have a global view of the routing exchange in the network, you can also move to Cloud WAN’s console, and under “Core network”, you can select the “Routes” tab to filter by segment and the Region to see which routes have been exchanged. The following figure shows the NonProd segment in eu-west-1. The routes where you see a Dash (“-“) under the “Destination” column are the ones that came from attachments in the same Region as the network edge that we are in. Meanwhile, routing exchange from other Regions is shown with the specific Region name (and segment name), for example, nonprod | us-east-1.

One optional step is registering the Transit Gateways in the Global Network. By doing so, with AWS Network Manager you can centrally manage your global network across AWS Accounts, Regions, and on-premises locations.

To register Transit Gateways from other AWS Accounts, you must make sure that you’ve enabled multi-account support for Network Manager. If you go back to the “Transit gateway network” section, then you can verify that the Transit Gateways are now visible in your inventory as show in the following figure.

In this post, we’ve reviewed different use cases where Transit Gateway and Cloud WAN can be used together, for example traffic segmentation, and walked through the steps of how to setup. From the creation of the peering, to the association of a Transit Gateway route table attachment to a Cloud WAN segment, we’ve presented an end-to-end scenario to achieve traffic segmentation in multi-Region environments. Visit the Cloud WAN product page, documentation, and pricing page for additional information.

Pablo is a Network Specialist Solutions Architect at AWS, where he helps customers to design secure, resilient and cost-effective networks. When not talking about Networking, Pablo can be found playing basketball or video-games. He holds a MSc in Electrical Engineering from the Royal Institute of Technology (KTH), and a Master’s degree in Telecommunications Engineering from the Polytechnic University of Catalonia (UPC).

Joe is a Senior Networking Specialist Solutions Architect supporting Global Accounts at Amazon Web Services. Utilizing his 20 plus years’ experience in networking, he assists customers with designing scalable, resilient, and secure AWS cloud environments. When not working he enjoys spending time outside boating and camping with his family.