Now that Cloud WAN is generally available, you can start using it in production. If you plan a greenfield deployment, where you are building an entirely new network from the ground up, consider following the process outlined in the Getting started with AWS Cloud WAN section of our documentation. If you have an existing global network that uses AWS Transit Gateway, this post is for you. Here we discuss interoperability design patterns and how to migrate from Transit Gateway to Cloud WAN. We include custom design patterns (such as integrating with AWS Direct Connect), Software Defined Wide Area Networks (SD-WAN) using Transit Gateway Connect, and centralizing firewalls.

We will explore three scenarios in this blog post using a simple architecture with three AWS Regions to illustrate the process:

(Of course, you don’t have to migrate from Transit Gateway to Cloud WAN unless you want to. If you are happy with your current architecture, great!)

At general availability, Cloud WAN integrates with leading SD-WAN, network appliance, ISV, and systems integrators. These partners have provided us with tons of helpful feedback and are ready to help customers get started with Cloud WAN. Here are some blog posts and other resources that share their experiences:

Note that you can only associate an inter-Region peering attachment with a single Transit Gateway route table. Therefore, that route table must know about both prod and dev routes.

In figure 1, we show only the route tables that apply to communication from VPC 1 and VPC 3. Both are part of the prod environment. 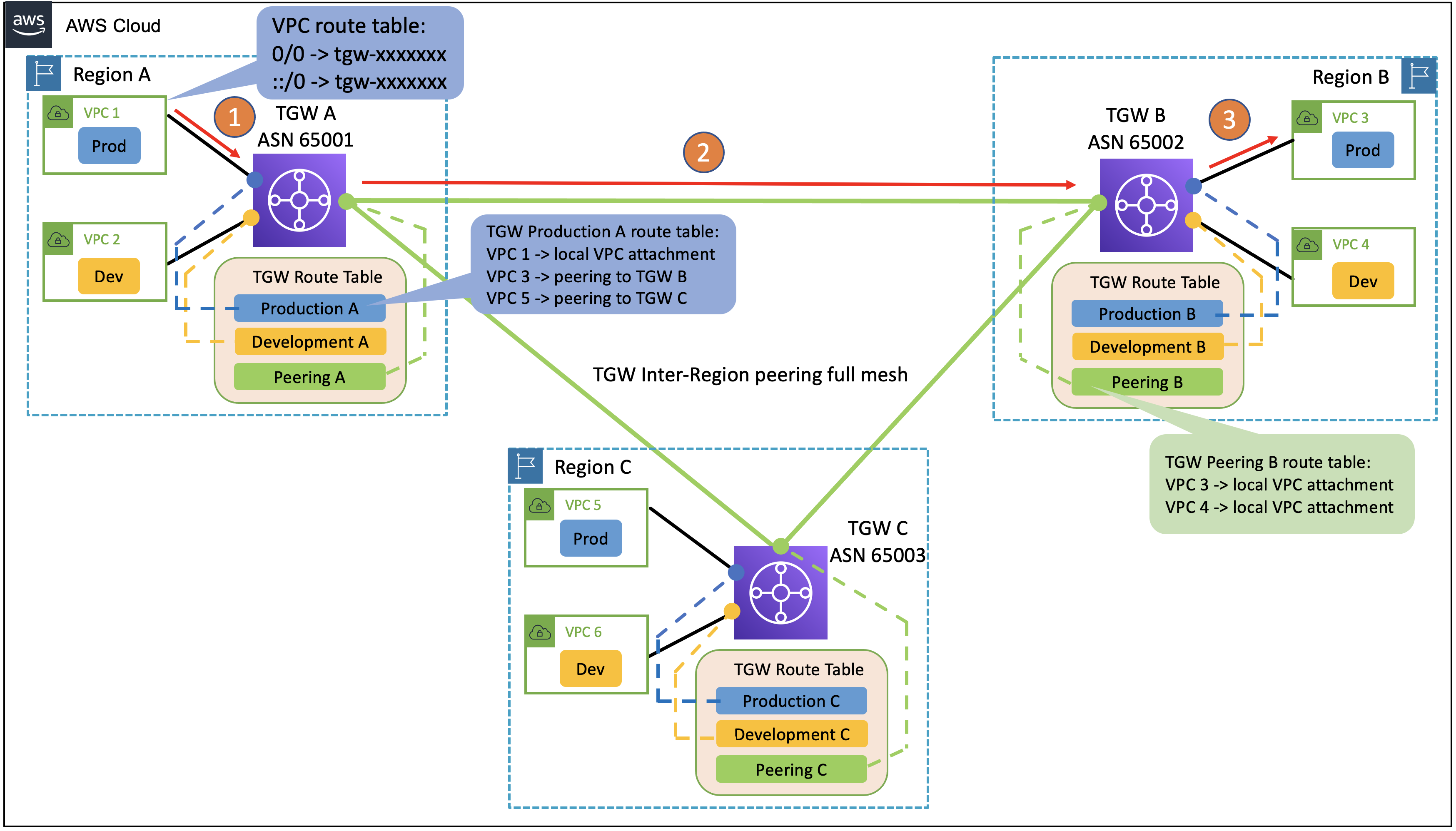 Traffic flowing from VPC 1 to VPC 3 follows these steps:

Return traffic (not shown) follows the same path in the opposite direction.

To begin your migration, you must first create your Cloud WAN global network and setup appropriate network segments to decide how your traffic is separated into logical groups. You can follow the same segmentation strategy that you have on your Transit Gateways. Like the preceding scenario, we only have prod and dev environments in this case. We’ll map those environments to two Cloud WAN core network segments. 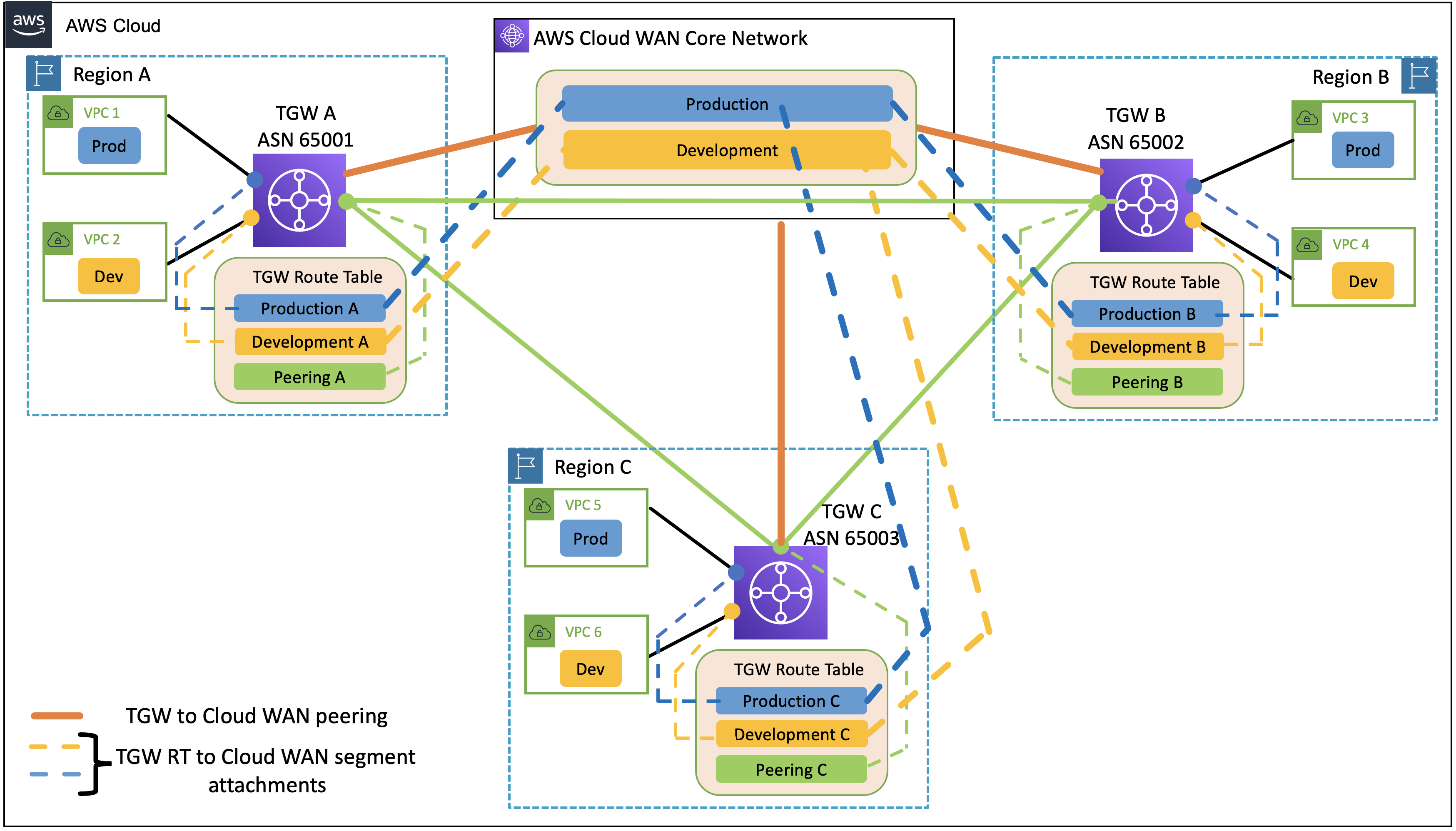 The diagram that follows (figure 3) shows the ultimate state of the network. The Transit Gateway cross-Region peering attachments, and the route tables used for handing traffic arriving over them, have been removed. All traffic across AWS Regions flows over Cloud WAN. 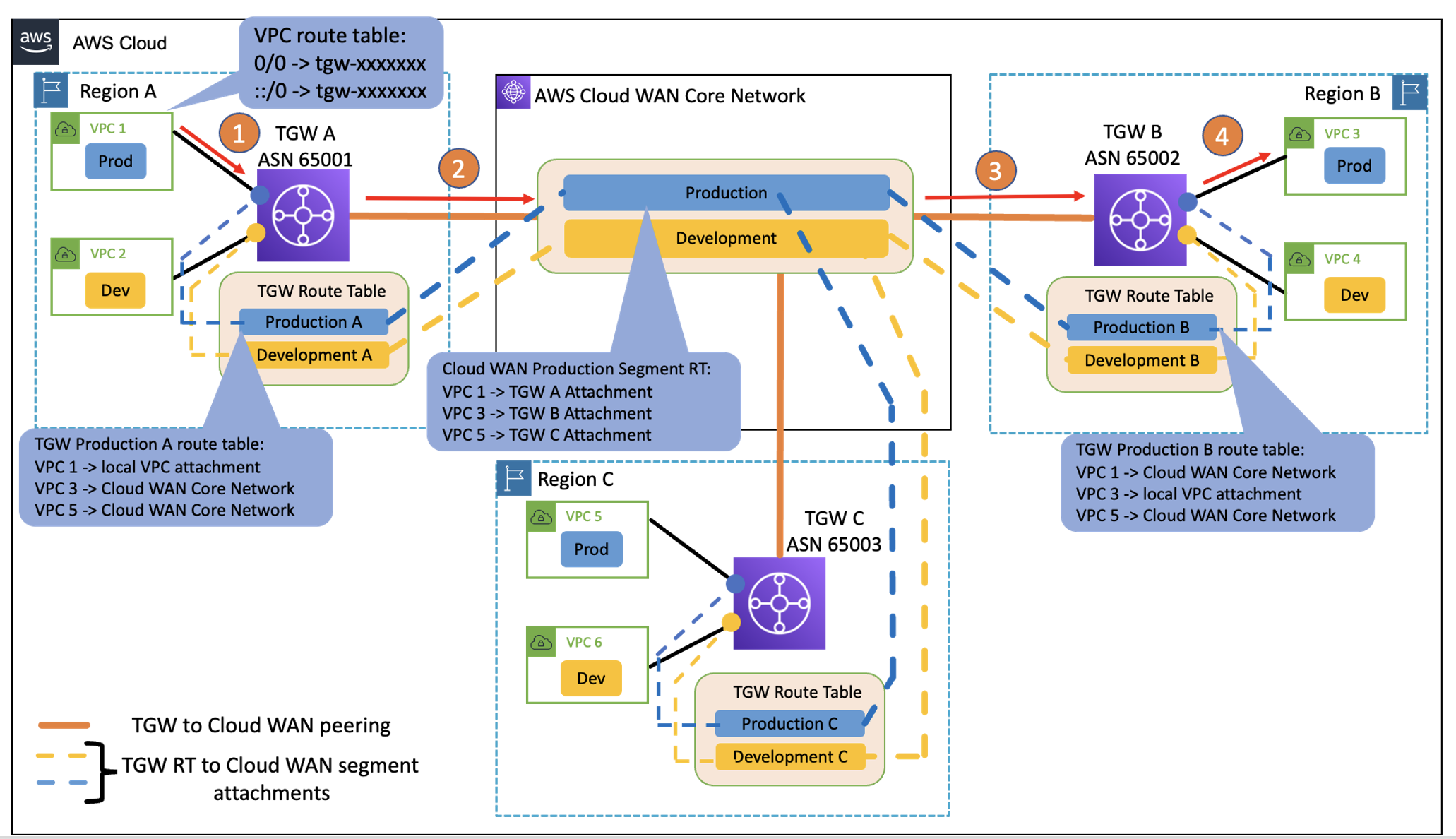 To migrate completely off Transit Gateway, you must connect your VPCs directly to Cloud WAN. The first stage is to create VPC attachments to Cloud WAN and map them to the correct segments. 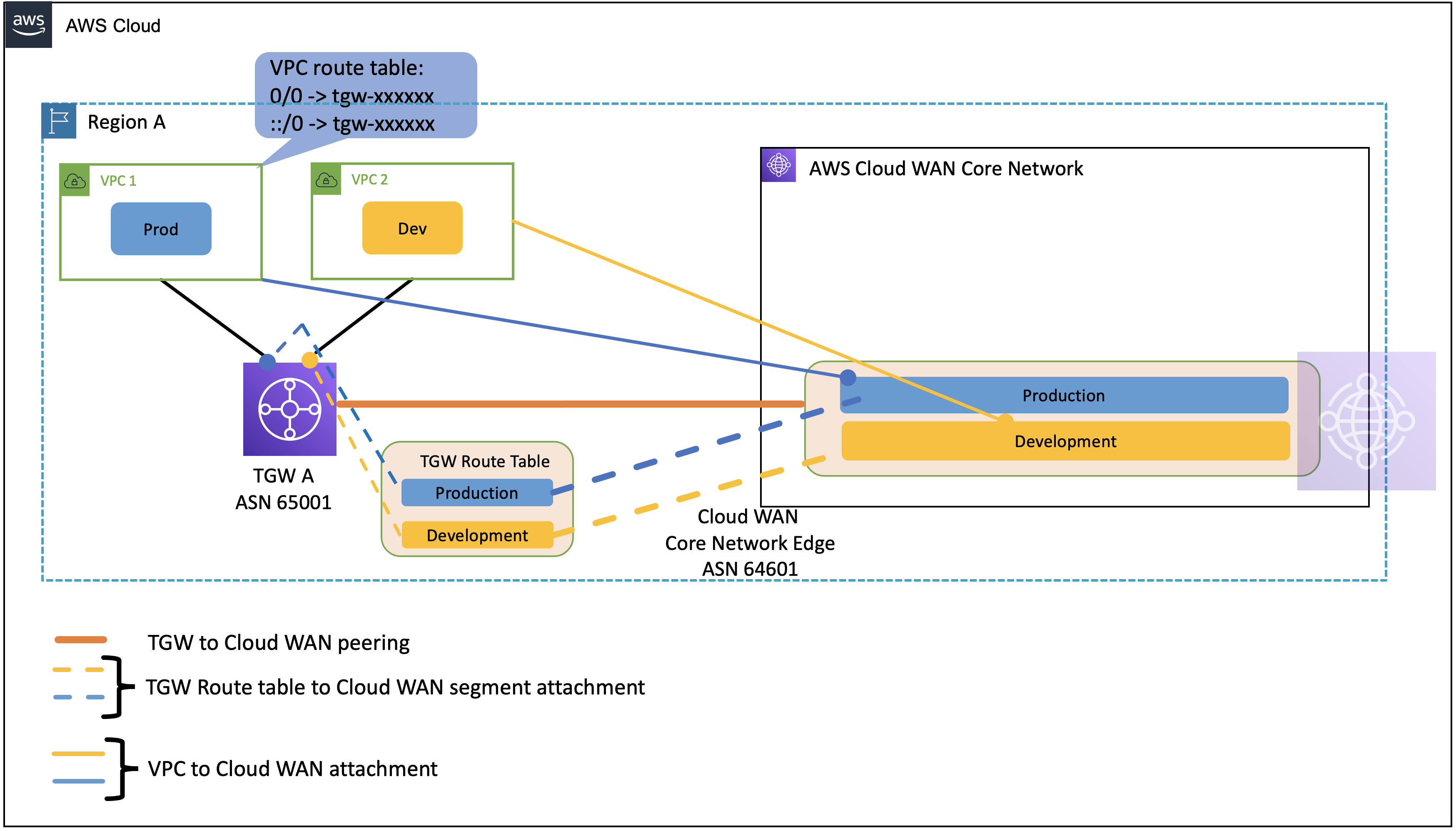 The static routes inside the VPC still send all traffic through TGW A. Traffic inside the Region uses local Transit Gateway only bypassing Cloud WAN.

However, traffic crossing the Region boundary flows asymmetrically, leaving the VPC using Transit Gateway and coming back to the VPC over the Cloud WAN attachment. This asymmetric flow works as long as there are no stateful network services in the path (stateful firewalls, NAT). Stateless firewalls (e.g., Network ACLs) are not affected.

Once you have attached all of your VPCs to Cloud WAN, it’s time to update the static routes in your VPC route tables. You set them up to route all traffic over the Cloud WAN core network instead of over Transit Gateway. Changing a route on a VPC results in asymmetric traffic flow between that VPC and others that are still using Transit Gateway, even in the same AWS Region. Just as mentioned earlier, as long as there are no stateful components in the path, this should not affect the traffic flow.

Note, changing the VPC route table using the AWS Management Console results in downtime as it requires a delete and re-add operation. However, if you use the Amazon EC2 ReplaceRoute API instead, you can make the change in one step. Refer to the ReplaceRoute API documentation for details.

Once all routes have updated, you can remove the Transit Gateways. Figure 5 shows the end result of this process in a single Region.

Here, the global architecture and traffic flows are much simpler. Traffic between VPCs in the same segment can use Cloud WAN to connect. Figure 6 shows the post-migration traffic flow, including the Cloud WAN network edges that Cloud WAN deployed in each Region as part of your core network. 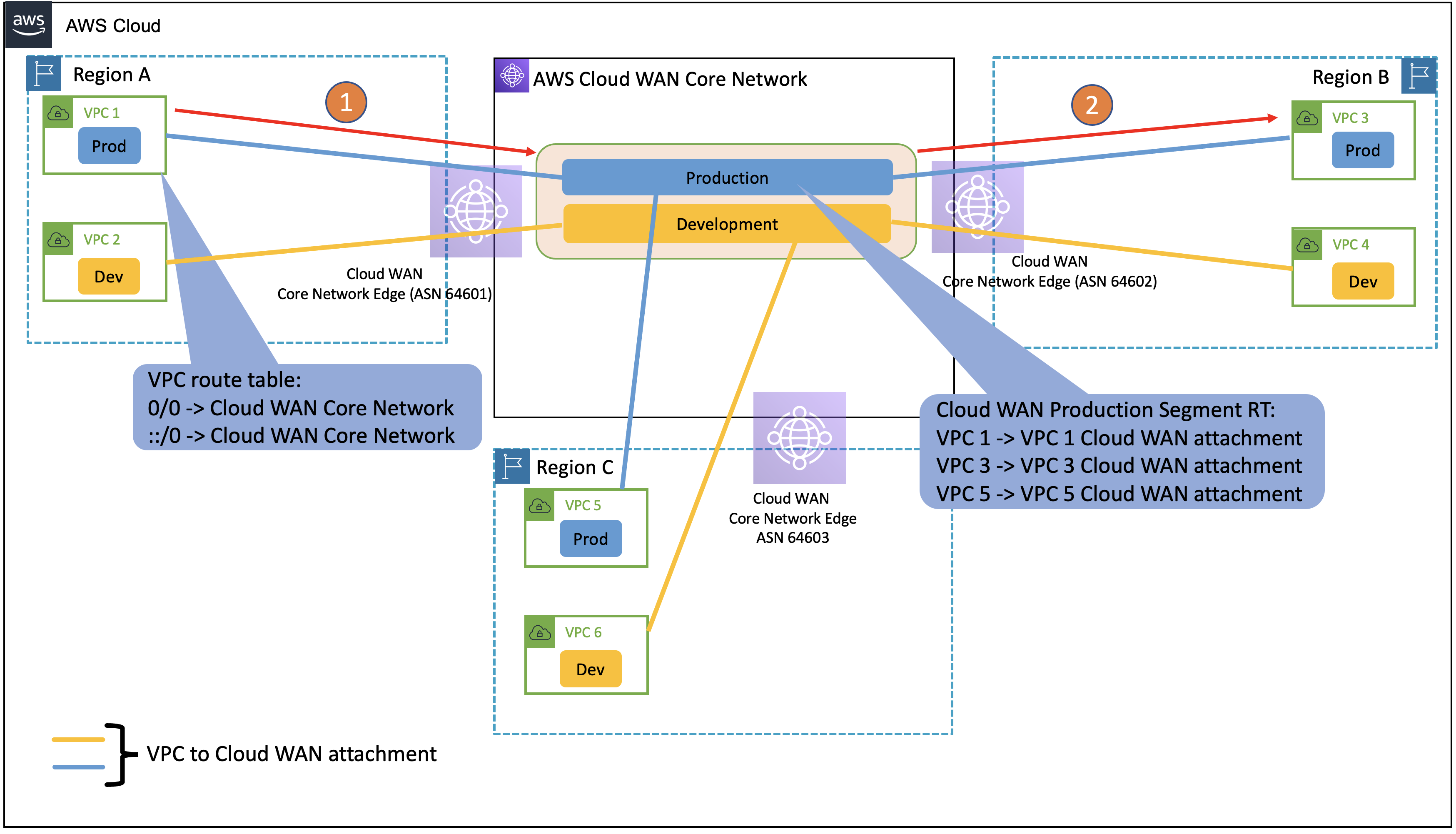 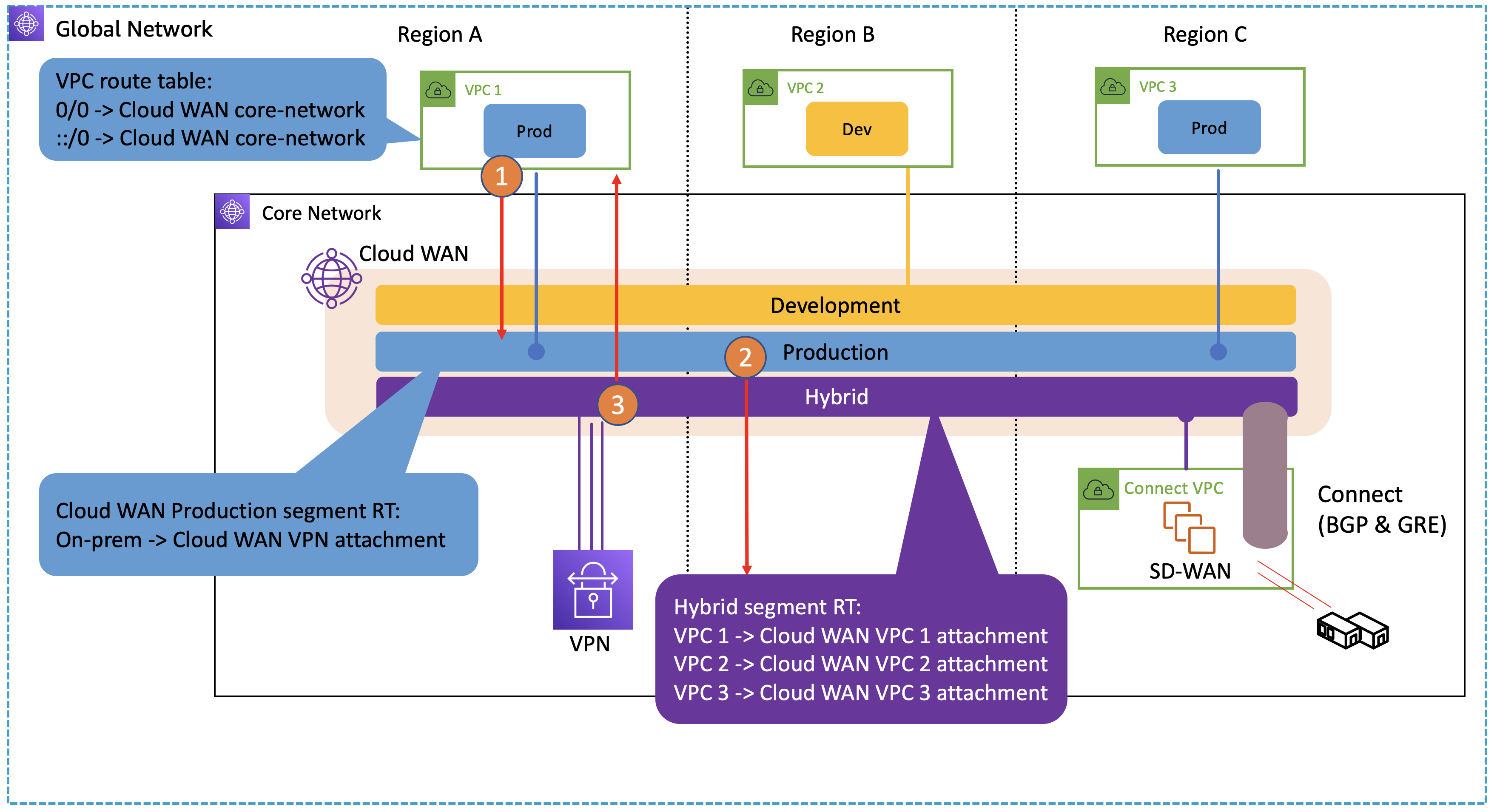 Traffic flowing from VPC 1 to the physical premises follows these steps:

The diagram that follows (figure 8) shows the architecture where on-premises resources are connected to Cloud WAN using Direct Connect, a Direct Connect Gateway, and Transit Gateway. In order for on-premises resources to reach VPC 1 in Region A, VPC 2 in Region B, and VPC3 Region C, Cloud WAN must be peered with a Transit Gateway. Cloud WAN has three segments (dev, prod and hybrid). We attached VPC 1 and VPC 3 to the prod segment, VPC 2 to the dev segment, and Transit Gateway to the hybrid segment. In this configuration, the traffic flow is North-South, meaning it moves from your premises, to AWS, and back. 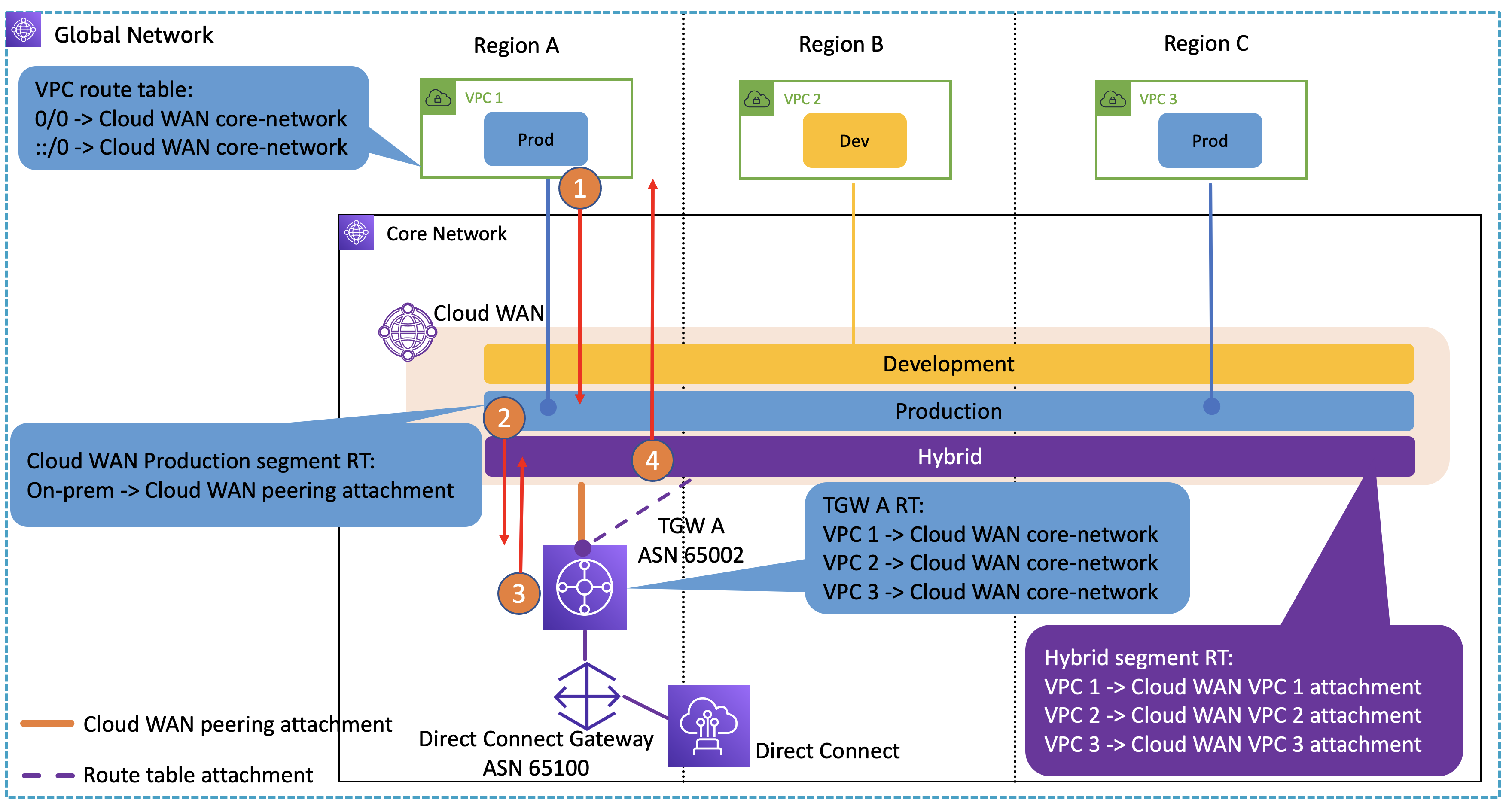 Traffic flowing from VPC 1 to your premises follows these steps:

If you want to inspect and filter your egress traffic, you can incorporate AWS Network Firewall with NAT gateway in your centralized egress architecture (Figure 9). In centralized egress inspection, traffic from private subnets within a VPC is routed through Cloud WAN and then over a separate Egress VPC with AWS Network Firewall. Then it is routed through a NAT gateway that performs network address translation (NAT) for the traffic that flows out to the internet. Return packets follow the same path in reverse.

In the diagram that follows (figure 9), we use this pattern for both prod and dev traffic that is following the centralized egress path. This architecture is for outbound/egress connections only, as the NAT gateway cannot accept inbound connections from the internet. Centralized Ingress inspection works similarly, where all traffic into your AWS network is proxied through an Ingress VPC hosting the firewall. From there, it gets forwarded to the target application in another spoke VPC using Cloud WAN. For more details on ingress inspection architectures, refer to the Design your firewall deployment for internet ingress traffic flows blog post. 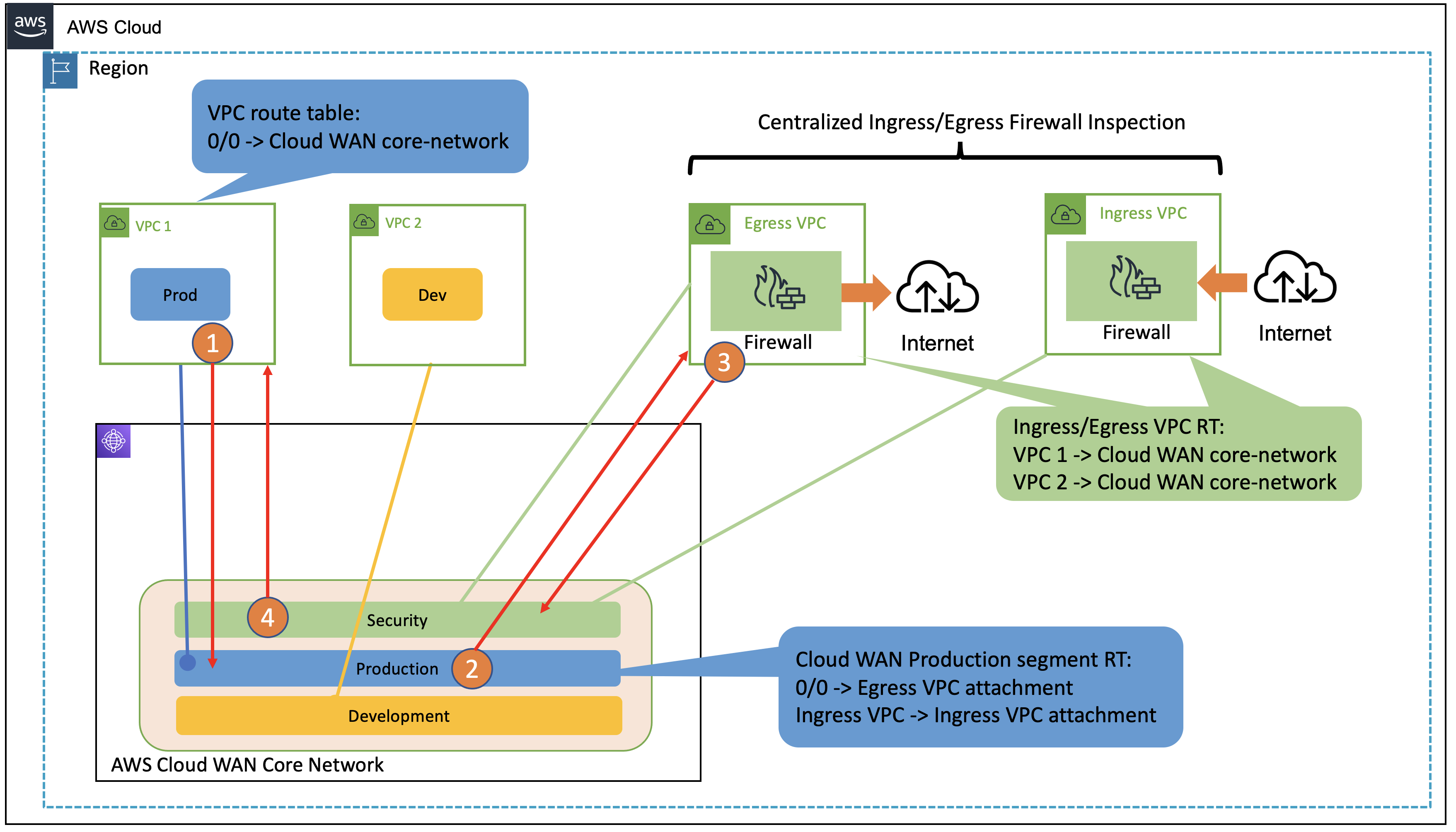 Egress traffic flowing from VPC 1 to the internet follows these steps:

AWS Cloud WAN makes it easy to build, manage, and monitor a unified global network that connects resources running across your cloud and on-premises environments. It provides a central dashboard for attaching the connections between your branch offices, data centers, and Amazon VPCs to the AWS global network—in just a few clicks.

This post discussed different architectures covering interoperability, migration, and federated models that meet the needs of common uses cases. And, we shared examples of how to integrate your existing Transit Gateway-based network with Cloud WAN. To get started on AWS Cloud WAN today, visit our documentation.

For more information about AWS Cloud WAN, you can refer to the following resources:

Tom is a Principal Solutions Architect specializing in Networking. He has over 15 years of experience building networks and security solutions across various industries – from telcos and ISPs to small startups. He has spent the last 4 years helping AWS customers build their network environments in the AWS Cloud. In his spare time Tom can be found hunting for waves to surf around the California coast.