AWS Direct Connect now supports MACsec security (IEEE 802.1AE), giving you a new option for securing your data from when it leaves your network until it arrives at AWS. With this release, Direct Connect delivers native, near line-rate, and point-to-point encryption for 10 Gbps and 100 Gbps links. Available at select locations for dedicated connections (that is, when a Direct Connect Ethernet port is dedicated to a single customer), MACsec is a great option if you need a secured connection to AWS at the highest speed available.

Why use MACsec with AWS Direct Connect?

At AWS we have a motto, we keep repeating to our customers: “Dance like nobody is watching. Encrypt like everyone is.” We already support IPsec VPNs over Direct Connect, and we already use TLS for our applications. So why introduce MACsec?

In short, the answer is that MACsec operates at layer 2 of the TCP/IP stack. This protects Ethernet connections while the two other protocols protect the upper layers of the stack. This has the following benefits:

MACsec Layer 2 encryption and integrity protects ethernet links from threats, such as man in the middle snooping and passive wiretapping. MACsec allows you to secure an Ethernet link—including all control plane protocol packets (such as ARP, DHCP, LLDP, and Layer 3 routing protocols like BGP).

MACsec can encrypt data faster, which results in greater speed. Because MACsec encryption is done through hardware (ASIC/PHY) it provides bi-directional line-rate, or near line-rate, encryption. In comparison, IPsec typically relies on a dedicated crypto engine or chip. These deliver a fraction of the overall throughput capabilities of the router or switch, as their performance is largely influenced by the packets size.

With the constantly growing amount of data transiting between on-premises data centers and the cloud, demand for Direct Connect bandwidth is outpacing the encryption rates that a traditional IPsec solution can support. AWS customers in regulated industries, such as financial services or healthcare, and/or customers with high-bandwidth workloads that have strict security requirements, such as media production and autonomous vehicle development, tell us they are running into these limits more and more often.

Media Access Control security (MACsec) is an IEEE 802.1AE standard for encrypting packets traveling between two MACsec-capable Ethernet switches/routers. (The current version, at the time of this writing, is IEEE 802.1AE-2018.)

In comparison to upper layer protocols such as IPSec and TLS for instance, MACsec was originally designed as a hop-by-hop encryption technology. Frames are encrypted when they are sent on the wire and are decrypted by the next hop device processing the frames.

The secure channels are assigned an 8 bytes identifier, the Secure Channel Identifier (SCI).

In general a channel only has one SA, however when a SA needs to be replaced the channel will have two SAs while they are swapped from one to the other, such as when keys are rotated.

The Secure Association contains two critical pieces of information, which are required to encrypt and protect the frames.

Packet Numbers are used by the MACsec replay protection mechanism. When replay protection is enabled, MACsec drops frames whose numbers are too far from the expected order. The peer receiving a frame compares its number with its lowest acceptable PN and drops any frames with lower numbers.

MACsec modifies the ethernet frame by inserting a 16 bytes MACsec tag (SecTAG) just before the EtherType and by adding a 16 bytes Integrity Check Value (ICV) at the end of the frame. The original EtherType and frame payload are encrypted and inserted between the SecTAG and the ICV. (Including the original Dot1q tag.)

The MACsec Key Agreement protocol (MKA) manages peer discovery, authentication, and encryption key generation. This includes discovering peer devices and verifying their legitimacy by checking if they are configured to match the following items:

The Secure Connectivity Association Key (CAK): The CAK is a static key that is associated with each MACsec-enabled interface. In AWS’ implementation, and in fact in most of the implementations, a pre-shared key is used and initially exchanged offline.

Note: The CKN and CAK each need to be 32 Octets expressed as 64 Hex digits

MACsec originally used GCM-AES-128 as a cipher suite. It was later amended to add an option to use GCM-AES-256. GCM-AES-256 extends packet numbering and adds support for the GCM-AES-XPN-128 and GCM-AES-XPN-256 cypher suites. These additional cyphers were introduced to deal with fast packet number exhaustion (PN field). At high link speeds, the original 32-bit packet number (PN) field was not able to handle higher speed interfaces and could cause a new security association to occur every 5 minutes for a 100G interface (for example, establishing new SA de facto forces a key rollover).

A specific cypher is used to encrypt the MKA control packets, in AWS implementation we currently support AES-CMAC-256.

This is done by selecting the “request MACsec” option in the AWS Direct Connect console. 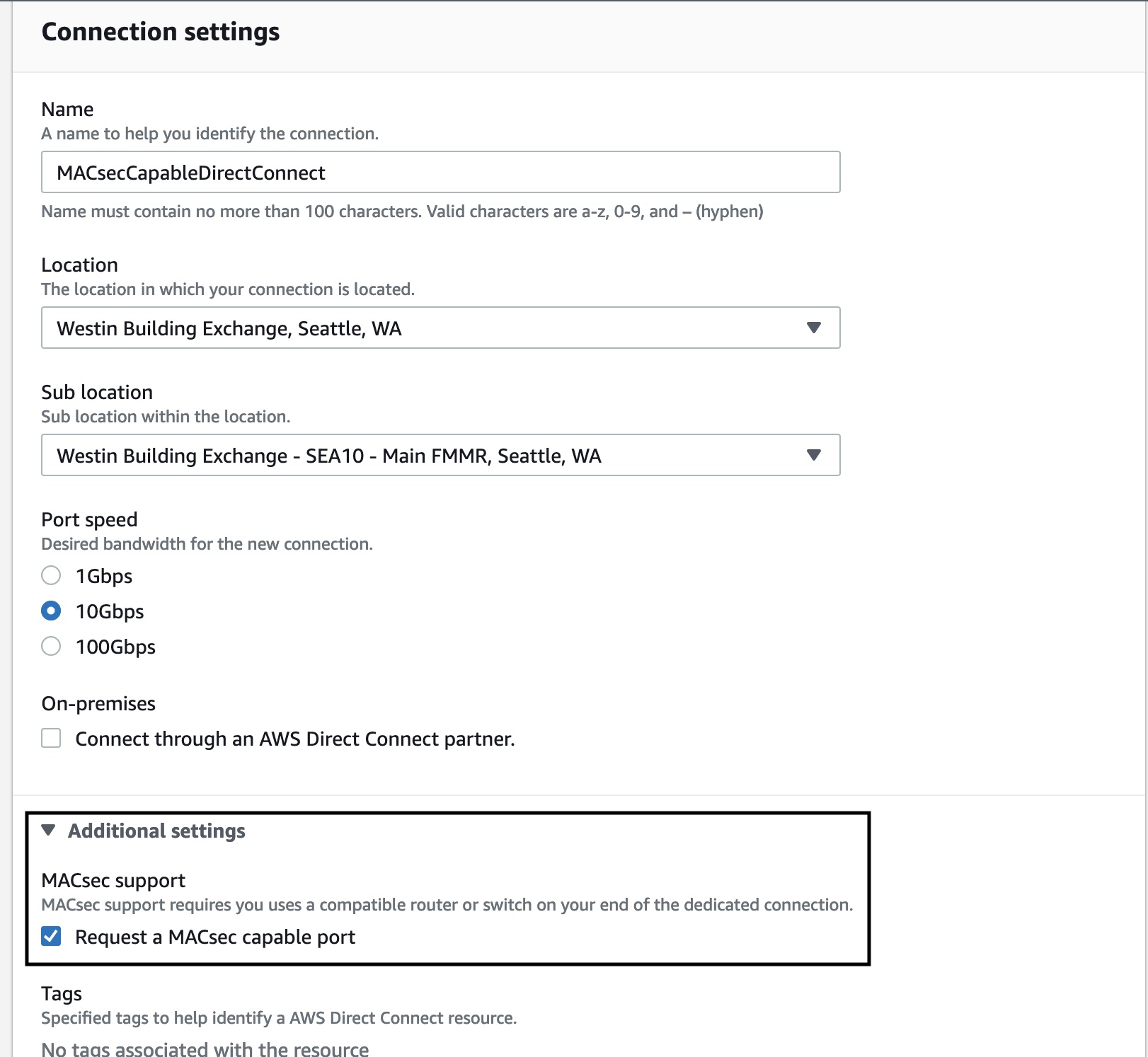 Since MACsec protects links on a hop-by-hop basis, you must have a dedicated connection that is transparent to layer 2 traffic and therefore MACsec compatible. Your device must have a direct layer 2 adjacency with our Direct Connect device. Your last-mile provider can help you verify that your connection will work with MACsec.

One of the first steps in configuring MACsec for Direct Connect is to choose the on-premises equipment that connects to the Direct Connect device, and make sure your devices supports MACsec. It is important that both ends of the connection agree on the following AWS default configuration options:

Because MACsec protects links on a hop by hop basis, your device must have direct layer 2 adjacency with the AWS Direct connect device. This leads to two likely topologies:

In this topology MACsec is configured between your on-premises switch and an AWS Direct Connect device. IP routing is handled by the on-premises router connected to your switch.

In this topology MACsec is configured between your on-premises Router and the AWS Direct Connect device.

Note: In both topologies, a Link Aggregation Group (LAG) can be used to consolidate links to achieve higher capacity.

You configure Direct Connect MASsec using the AWS Management Console or the Direct Connect API. We are introducing new Direct Connect APIs as part of our MACsec rollout, and some currently available APIs are extending to support MACsec features. We are also delivering an updated AWS CLI version that supports these new API methods.
The configuration workflow is pretty straightforward:

The Direct Connect CreateConnection API has been extended with a new requestMACSec field. You can use the AWS CLI to request MACsec support for a new connection with the following:

Step 2: Associate the CKN/CAK with the connection

A new Direct Connect API AssociateMacSecKey has been introduced to associate a CKN/CAK pair with a MACsec-enabled port (or LAG).

You can associate the CKN/CAK with the connection in two ways, either you have already defined the pair in AWS Secret Manager (and you are referencing the secret ARN), or you directly specify the CKN/CAK values.

In the latter case we create secrets in AWS Secrets Manager to store the CKN/CAK values you entered and associate them with the connection.

Here are two examples of how to use the AWS CLI to associate a CKN/CAK with a connection:

The Direct Connect DescribeConnections API is extended to include status of MACsec related configurations in API response such as:

Here is a snippet of the aws directconnect describe-connection output, highlighting the MACsec specific values:

In this output you can see the port is associated with two keys as shown by the “macSecKeys” and the port encryption status is up and using the CKN starting with 444CF2…., and the encryption mode is “should_encrypt”.

The encryption mode parameter defines how the port participates in MKA and MACsec. The possible values are:

The default value for the encryption mode is “should_encrypt”, and this can be changed using the new DirectConnect API UpdateConnection.

Here is an example using the AWS CLI:

You can migrate existing VIFs that are associated with a connection using the existing AssociateVIF AWS Direct connect API. This process involves downtime as the change is provisioned on our end.

A key point with regards to LAG and MACsec, is that the MACsec-specific configuration is done at the LAG level and not at the Direct Connect Connection level.

The configuration workflow consists of:

Proper key management is critical for any MACSec implementation. That said, it can be challenging to securely store, distribute, rotate, and consume the CKN/CAK pairs used with MACsec. To reduce the operational overhead required for these tasks, MACsec for Direct Connect integrates with AWS Secrets Manager using a service-linked role.

AWS Secrets Manager helps you protect the secrets needed to access your applications, services, and IT resources. This service enables you to easily rotate, manage, and retrieve database credentials, API keys, and other secrets throughout their lifecycle. A service-linked role is a unique type of AWS Identity and Access Management (IAM) role that is linked directly to an AWS Service. For more information, see Service-Linked Role Permissions in the IAM User Guide.

The current Direct Connect MACsec implementation does not support key rotation based on key lifetime, to begin the key rotation you must associate a new stored key to the connection using the console or the API.

Customers that require layer 2 confidentiality and integrity or high speed encryption for their Direct Connect connections will benefit from the new MACsec feature.

Fabrice is a Solutions Architect at AWS. He helps build cloud initiatives for government, education, healthcare, and nonprofit organizations in Europe. Previous to AWS, Fabrice has spent almost 20 years designing and building all sort of networks and data centers for Carriers, MSPs and Entreprises accross the EMEA region.

Thaddeus is a Solutions Architect at AWS. He has over 17 years of experience in information technology. At AWS, Thaddeus focuses on helping large enterprise organizations develop, adopt and implement cloud services and strategy. Thaddeus has an area of depth in several AWS Networking and Content Delivery services.