Many organizations use hybrid networks to connect on-premises data centers to the cloud. These networks often use both AWS Direct Connect and private WAN MPLS links to connect data centers to cloud resources and to each other. With multiple connections, organizations need to be able to control the path that network traffic will follow between endpoints. A previous blog post, Creating active/passive BGP connections over AWS Direct Connect, shows how BGP best path selection algorithms LOCAL_PREF and AS_PATH Prepending can be configured in a data center to create active/passive connections when using Direct Connect.  In this post, we will show how the Longest Prefix Match (LPM) routing algorithm can be used to control the network path from AWS to an on-premises data center and vice versa.

In Figure 1, there are two on-premises data centers; one located in the western United States (designated PHX), and another in the east (designated ATL). 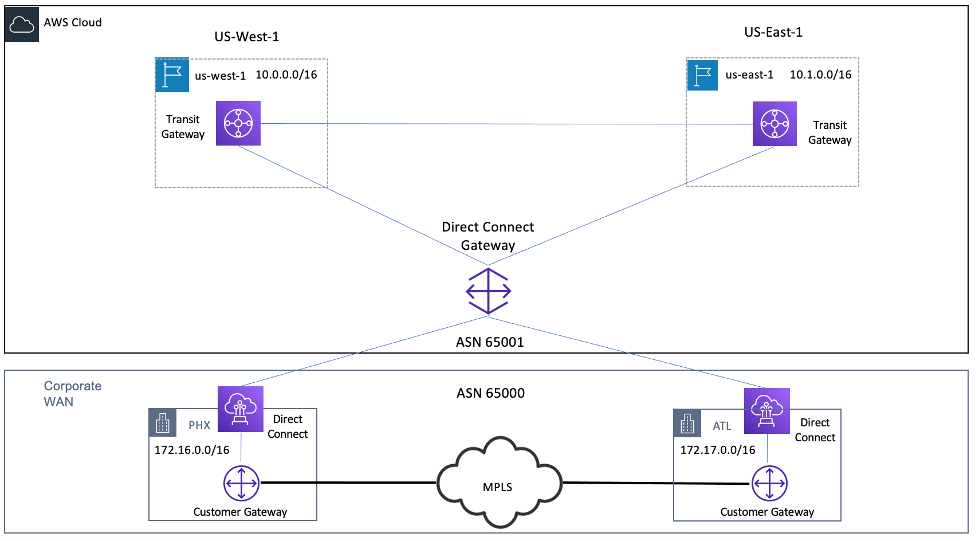 Due to the proximity, PHX is connected to the US West (N. California) Region (us-west-1), and ATL is connected to the US East (N. Virginia) Region (us-east-1). The Transit Gateways located in each Region are peered with one another for Inter-Region connectivity. The diagrams in the blog show a single Direct Connect connection in both data centers in our examples, but AWS recommends following AWS Direct Connect Resiliency Recommendations for production environments.

Note that there are two possible paths from the AWS Regions to either data center. For example, let’s suppose we want to establish a network connection from PHX to US-West-1 as shown in Figure 2: 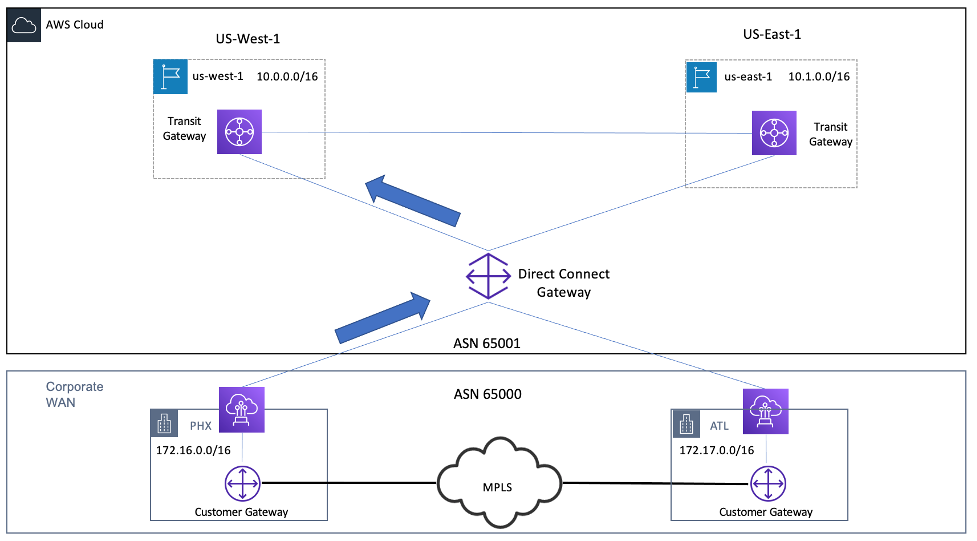 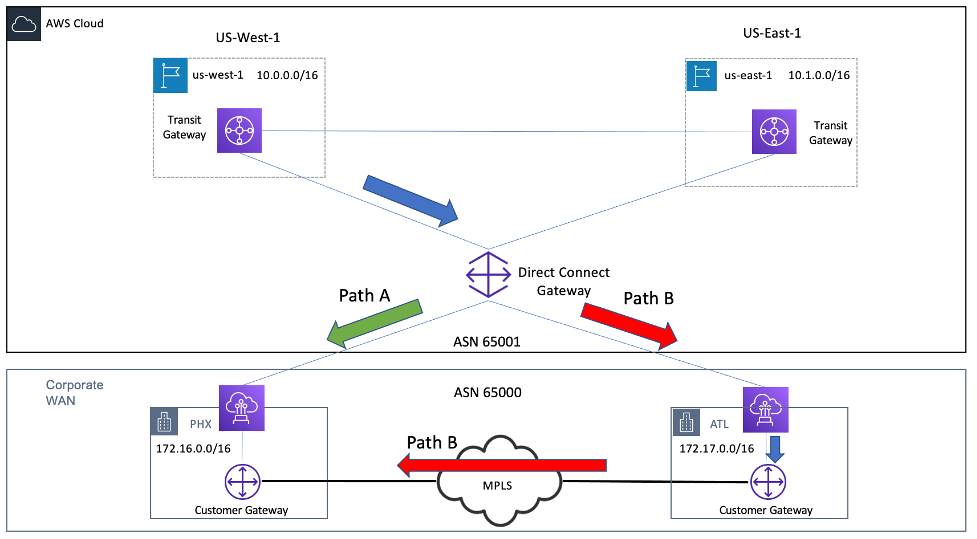 In Figure 3, we see the possibility of asymmetric routing where traffic initiated from an on-premises data center to an AWS Region can return via two possible paths. If traffic is initiated through the local Direct Connect but returns through the MPLS connection, it can be problematic for stateful firewalls that are located in one of the data centers that need to track the traffic flow in both directions.

In order to influence traffic from AWS to our on-premises data centers, we need to deploy dual Direct Connect Gateways as shown in Figure 4. 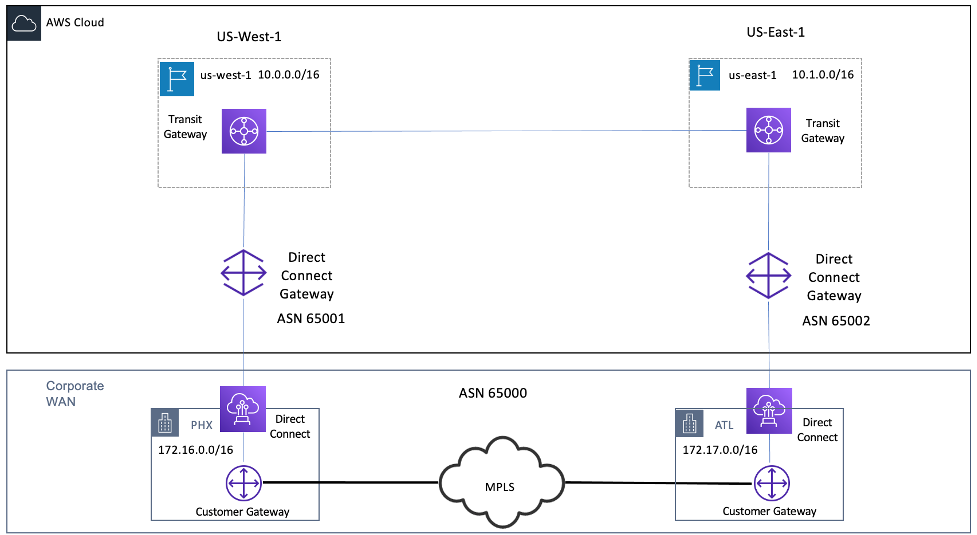 Here we have both Direct Connects connecting to AWS via separate Direct Connect Gateways respectively. With this design, we have two separate paths between AWS and the on-premises data centers. As shown in Figure 5, traffic originating from US-West-1 can reach PHX by traveling directly to the local Direct Connect (Path A).  Or it can take an alternative path, first to US-East-1 via Transit Gateway peering, then to Direct Connect in ATL, and then across the MPLS connection (Path B). 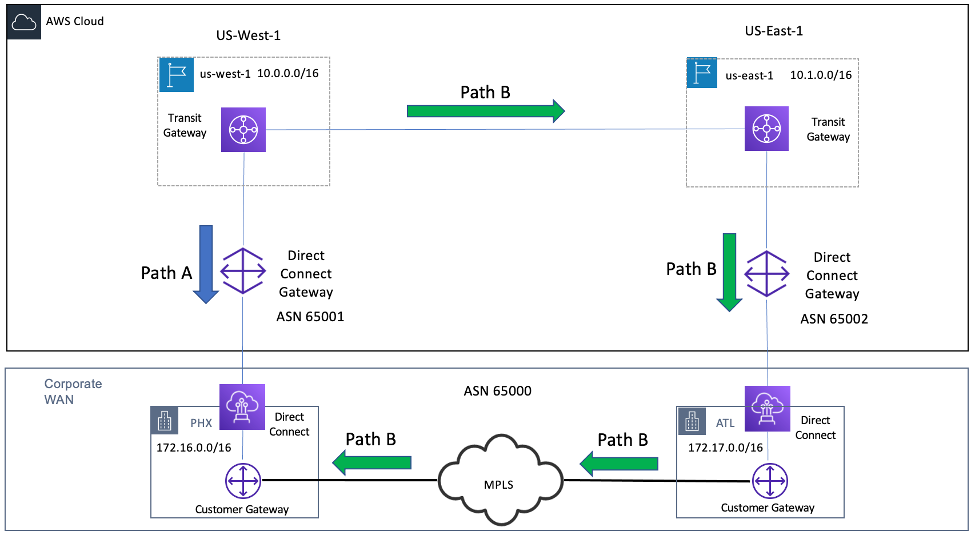 Figure 5: Dual Paths from an AWS Region to a Datacenter 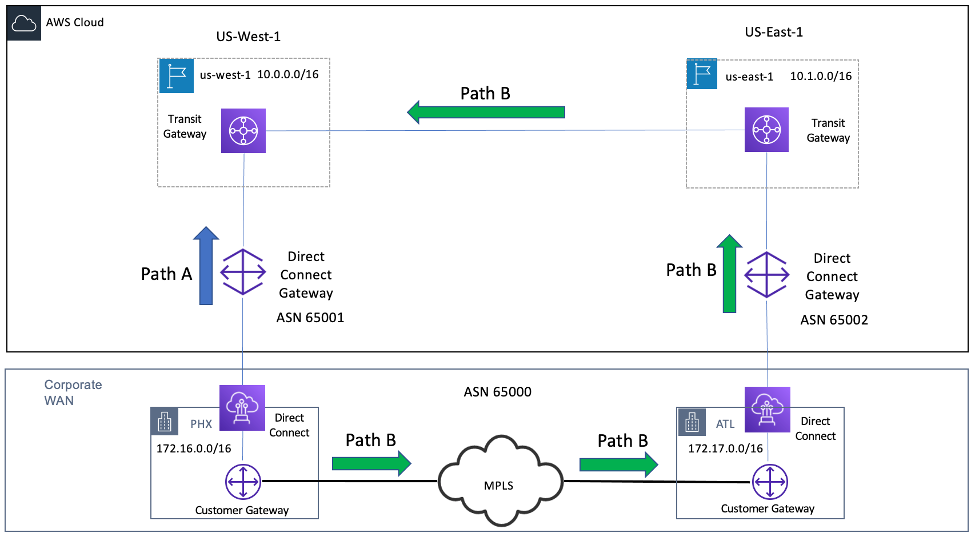 Given two possible network paths from an AWS Region to an on-premises data center, how do we control which path to choose? Customers typically prefer to use a data center’s local Direct Connect as its primary connection to and from the AWS Region due to performance and latency and use an alternate path only if the primary path is disrupted.

For example, let’s suppose that the local Direct Connect connection in PHX is disrupted. We would now like to make sure that a resource in US-West-1 can still reach a destination in PHX via the secondary path through US-East-1 and ATL as shown in Figure 7: 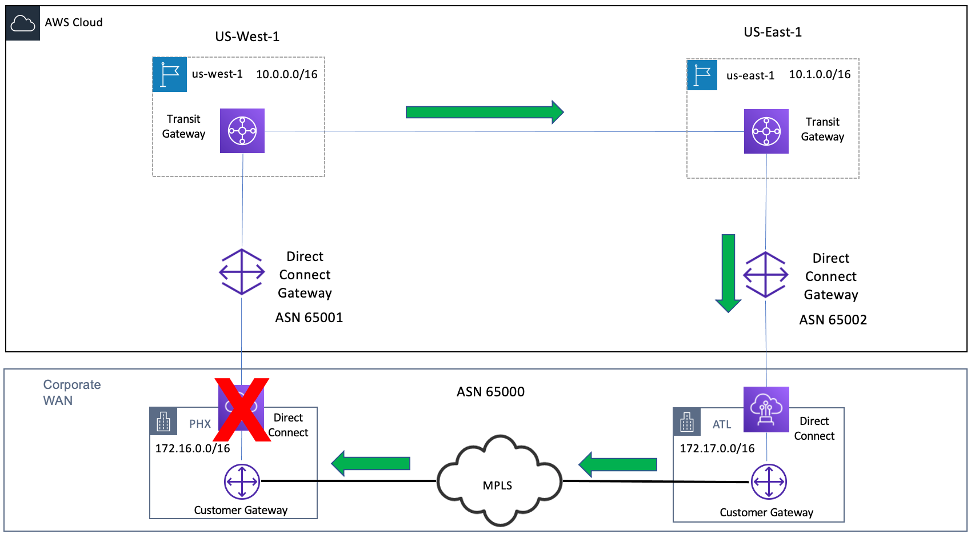 How do we ensure that the traffic will take a secondary path only if the primary path is disrupted as in Figure 7?

There are multiple ways to do BGP traffic engineering with Direct Connect. In this example, we use the Longest Prefix Match (LPM) routing algorithm to influence path selection to and from AWS. In LPM, a router selects the longest/most specific IP prefix match from multiple routes in the route table to determine which outbound interface to send a packet.

Going back to our example, let’s assume a resource in US-West-1 needs to reach a server in the PHX data center with destination IP address 172.16.0.101. The Transit Gateway route table in US-West-1 starts with this entry as shown in Table 1:

We now have two routes to the same IP prefix. The first is a dynamic route advertised through Direct Connect Gateway. The second is a static route to the other Transit Gateway via peering attachment. Normally, the static route would take priority over the dynamic route. However, in our case, we want to prioritize the path via Direct Connect Gateway over Transit Gateway. To do this, we need to advertise more specific routes from the customer router in PHX as shown in Figure 8. 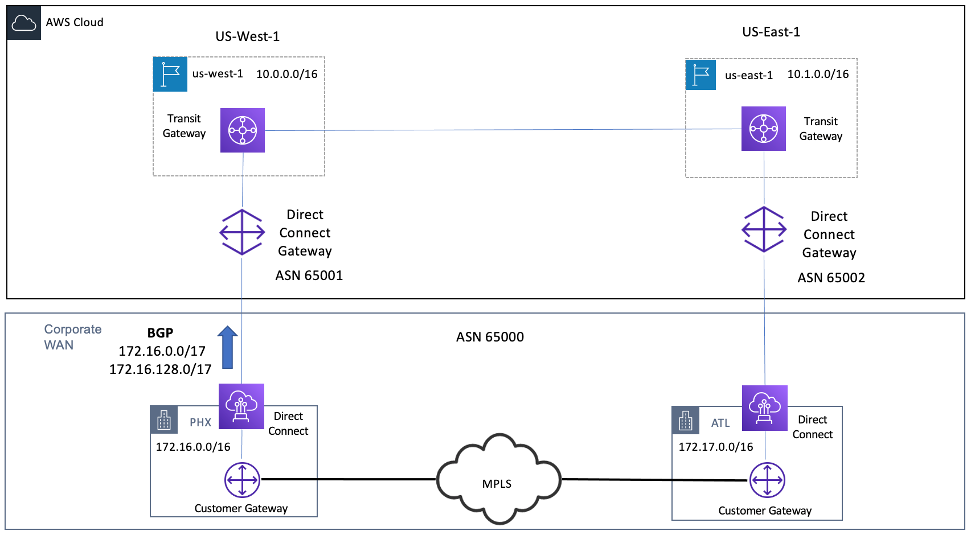 This would result in the following routes in the US-West-1 Transit Gateway Route Table as shown in Table 3:

Here we have converted the IP prefix 172.16.0.0/16 routes into two more specific /17 routes over the Direct Connect Gateway attachment. These /17 IP prefixes advertised from PHX will cover the same routes as the original /16 prefix, including our 172.16.0.101 destination.

The third route entry to the 172.16.0.0/16 prefix by way of the Transit Gateway peering attachment also matches our destination of 172.16.0.101. But it has a shorter IP Prefix and is less specific. Therefore, the US-West-1 Transit Gateway will prefer the more specific /17 paths via the Direct Connect Gateway as shown in Figure 9: 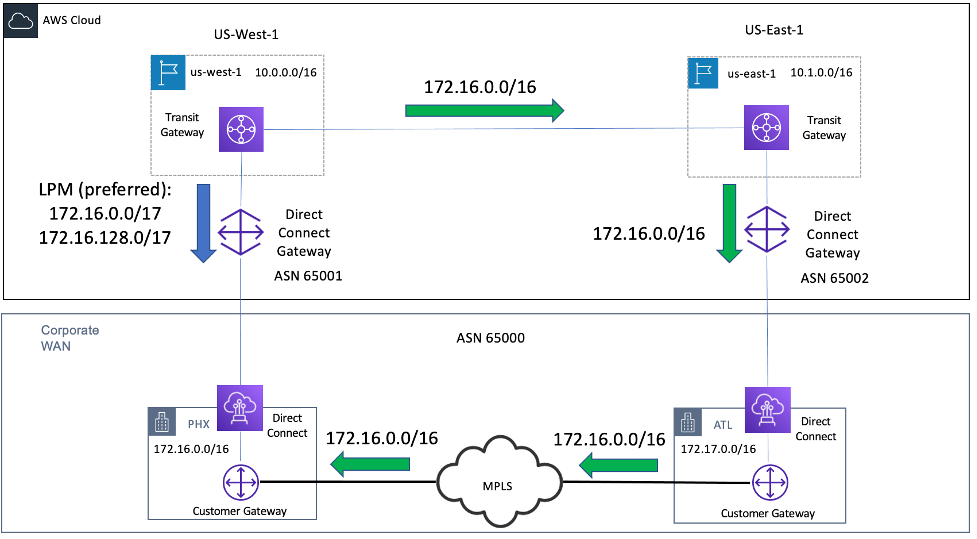 What would happen if the Direct Connect connection in PHX becomes disrupted as shown in Figure 10? 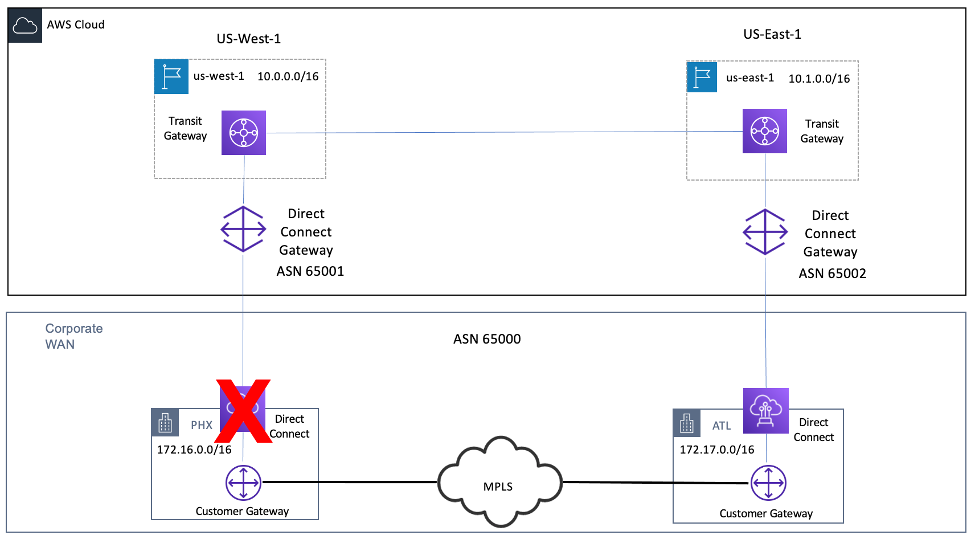 If that were to occur, the PHX router would stop sending its BGP announcements to US-West-1. The /17 routes it had previously advertised would be withdrawn, and the US-West-1 Transit Gateway would failover traffic to the next matching 172.16.0.0/16 route over the Transit Gateway peering attachment as shown in Figure 11: 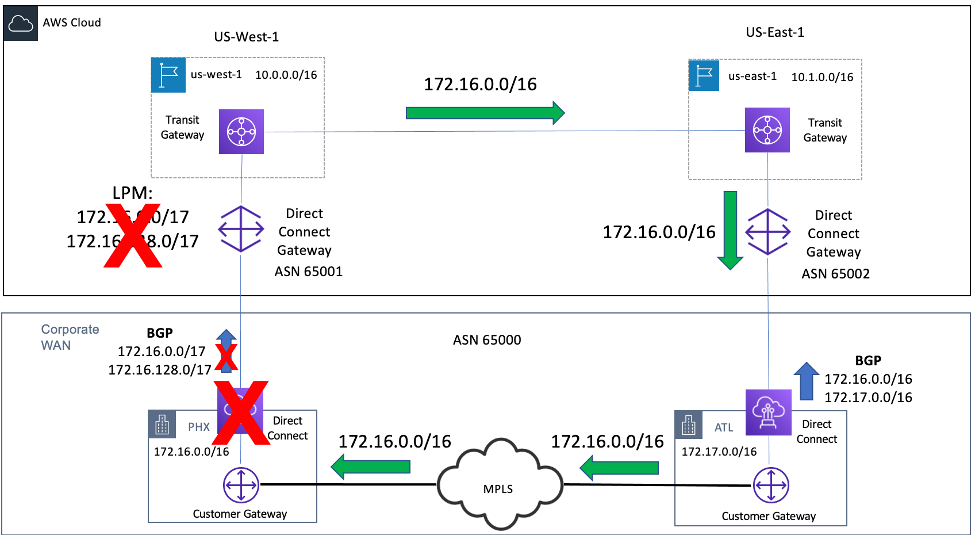 We can also use LPM to influence traffic in the reverse direction. Let’s suppose we want traffic originating from PHX to reach a destination resource in US-West-1 (10.0.0.0/16) with the local Direct Connect as the primary path and the MPLS as the secondary. The destination resource is in a VPC with IP address of 10.0.0.101. 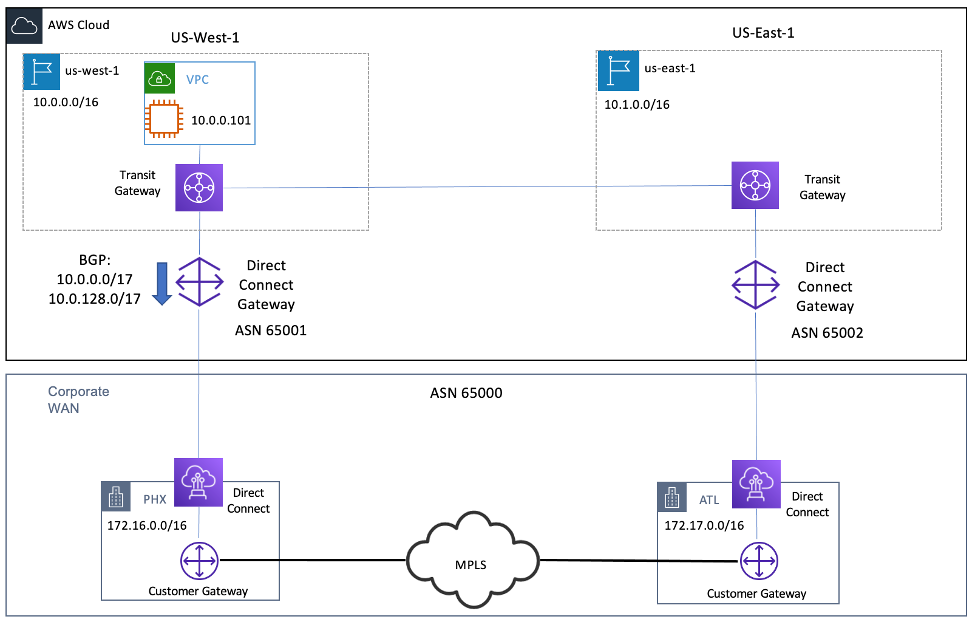 Figure 12: Use LPM to prefer local Direct Connect as Primary to US-West-1

The resulting route table in PHX customer router would then look as shown in Table 4:

Because the routes using the /17 prefix are more specific, the PHX router will use its local Direct Connect as its primary path to reach the 10.0.0.101 destination in US-West-1. If the local Direct Connect in PHX is disrupted, the PHX router will failover to the next matching path (10.0.0.0/16) over MPLS, and then through US-East-1 to reach its destination in US-West-1 as shown on Figure 13: 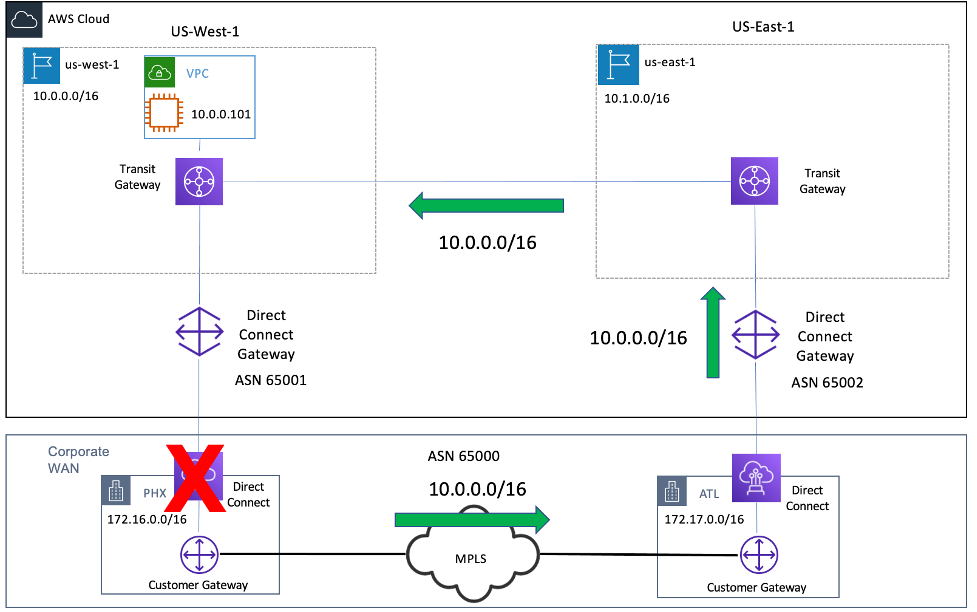 The return traffic from US-West-1 would follow the same path in the reverse direction as shown in Figure 14: 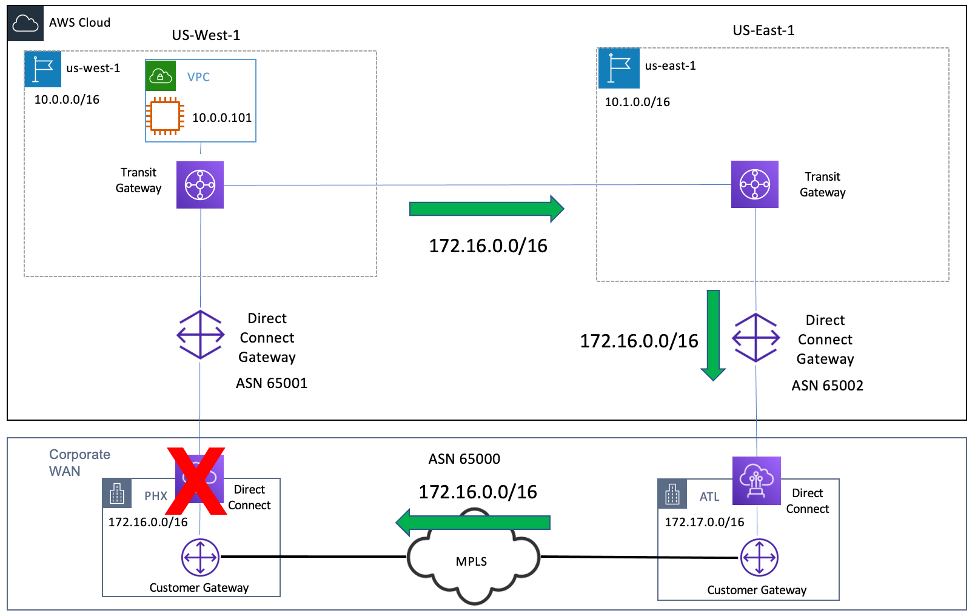 Global organizations use hybrid connectivity models to connect on-premises data centers to cloud resources around the world. These hybrid networks can provide multiple paths between destinations using both Direct Connect and private WAN links such as MPLS. In this post, we showed how Longest Prefix Match can be used to influence which network path traffic will take between the AWS and on-premises destinations. We showed how routes to an IP prefix for example 172.16.0.0/16 can be broken into two more specific prefixes such as 172.16.0.0/17 and 172.16.128.0/17. By using more specific routes, we can influence the traffic path decisions.

Nolan Chen is a Solutions Architect at AWS, where he helps customers build innovative and cost-efficient solutions using the cloud. Prior to AWS, Nolan specialized in data security and helping customers deploy high performing wide area networks. In his spare time, Nolan enjoys reading history books while thinking about what the future might hold.

Rizwan is a Senior Solutions Architect at AWS, where he helps customers design innovative, resilient and cost-effective solutions using various AWS services. He holds a MS in Electrical Engineering from Wichita State University.