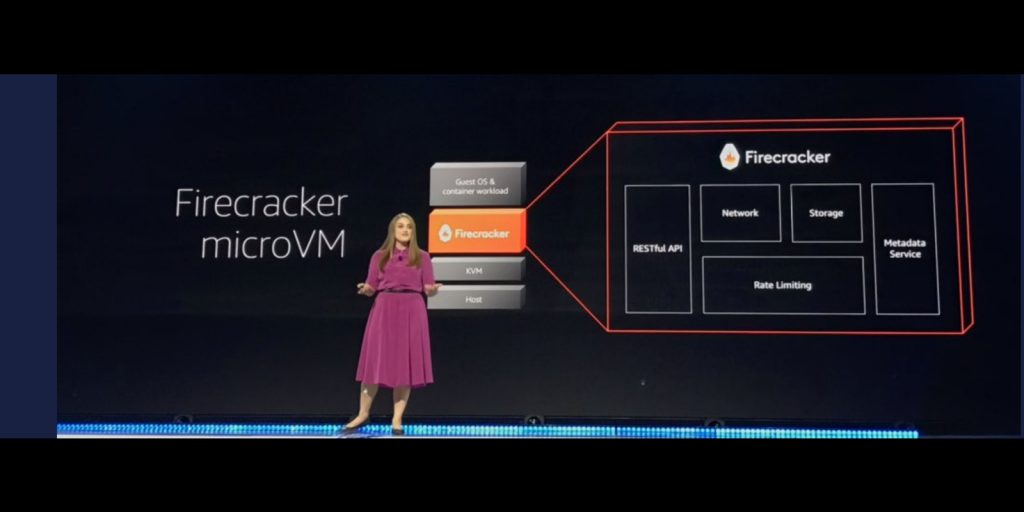 Wrapping up our final summary, we kick off with a roundup of the open source updates in the area of compute and emerging technologies. We start with a great explanation of Fargate on Firecracker from Clare Ligouri during Werner Vogel’s keynote, and proceed to a broad selection of the container sessions and workshops that ran throughout the week, finishing with a summary of other interesting open source-related sessions and workshops.

This is the final summary of open source news from re:Invent. In this, part three of three, and we will be covering compute and emerging technologies such as robotics and blockchain as well as covering all other areas of open source such as Java. Part one covered all things data, analytics and machine learning and and part two covered mobile web development, containers and devops.

During Werner Vogels’ keynote, Clare Liguori provided a peek at Firecracker containerd, the future of how we will be running Fargate; check it out on GitHub and, while you’re there, why not have a look around and join the community? You can also watch the announcement during the keynote, Clare’s piece starts at around 21 min.

Container fans, put these sessions on your watch list:

In OPN402–Firecracker open source innovation you can learn more about Firecracker and how customers are building innovative new solutions on top of it.

Are you running or managing Linux desktops? Have you been exploring how to provide and provision these as virtual desktops? EUC330–How to use Amazon Linux Workspaces for agile development provides an overview of Amazon’s Linux Workspaces for Enterprise, and how to prepare and how to build custom images for your users. To learn more about the Amazon Linux roadmap, see the last part of CON217–Roadmaps for containers, application networking and Amazon Linux (starts at 40:00).

SVS341–An in–depth tour of AWS SAM – Get to know the Serverless Application Model (SAM) in this great session, expertly delivered by Alex Wood. If that whets your appetite and you want an in–depth demo, check out DEM158–AWS SAM toolkit: build, test and debug your serverless applications.

Learn more about our approach to enterprise blockchain and how we leverage open source projects such as Hyperledger. In OPN217–Enterprise Blockchain: AWS’s open source approach the speakers address what is blockchain, do you need a blockchain, and Amazon’s view of blockchain. Tamara Dull is joined by Brian Behlendorf, Executive Director of the Hyperledger Foundation.

In the ROB201–Leadership session: Welcome to the era of smart robots, Roger Barga from AWS and Chris Morgan from Toyota Advanced Robotics introduce robotics to the beginner, outline how AWS RoboMaker can bring modern application development techniques to help accelerate robotics development, and then Chris walks us through some great use cases and examples of robotics today. A few other AWS RoboMaker sessions and announcements you should check out:

Other open source sessions and announcements of interest

We had some great security-based material:

Amazon FreeRTOS was covered in both IOT214–Whats new with AWS IoT Device software and IOT310–Bringing intelligence to the edge for connected home use cases.

In OPN304–Migrating AWS Lambda’s front end from Java 8 to Java 11 learn about the journey of migrating AWS Lambda’s front–end service from Java 8 to Java 11 using Amazon Corretto, our no–cost distribution of OpenJDK. We also walk through the code and dependency changes required to migrate to Java 11, how we measured performance improvements, and how we safely deployed such a significant update to a large–scale service across multiple regions in production.

In OPN303 – BPF performance analysis at Netflix, Brendan Gregg spoke about Extended BPF (eBPF or simply BPF), an open-source Linux technology powering a whole new class of software: mini programs that run on events. BPF can be used to instrument arbitrary functions, as Brendan demoed with a BPF theremin.

Keep up to date with open source at AWS

I hope this summary has been useful. I have looked for all the session videos that have been uploaded to date, but if I have missed anything, please get in touch and I will update this summary. Remember to check out the Open Source homepage to keep up to date with all our activity in open source by following us on @AWSOpen.