This article demonstrates an approach for running Selenium tests at scale for low cost by utilizing AWS Fargate Spot to run tests without having to manage and orchestrate their containers.

Integration tests, as defined by Martin Fowler, “determine if independently developed units of software work correctly when they are connected to each other.” The Selenium framework is an open source suite of automation testing tools based on the JavaScript framework. It can run integration tests directly on different target browsers, such as Chrome or Firefox, and drive the interactions on the web page without any manual inputs.

Tools such as Selenium eliminate repetitive manual testing that consumes lots of time and effort. Automated testing conforms to the ideas of Agile and DevOps, which endorse a continuous delivery workflow. Selenium has become a popular tool for testing, because it is open source and meets the requirement of quick and reliable testing, which helps enterprises save time and money.

Let us consider a scenario where a developer has added a new feature or made a bug fix to an existing product and checked in the changes to Git. As part of the CI/CD pipeline, the following manual and automated steps would typically occur:

In a typical case, the number of test cases may vary between a handful to a few thousand depending on the application. Executing these test cases can take lots of time, which slows the process of getting features deployed in production.

The bottleneck when using automated testing is hardware resources, such as virtual machines (VMs) and vCPU, because you can run as many tests as your hardware will support. The traditional ways to accelerate this test case execution are:

These methods are not scalable and cost both money and time. The approach outlined in this blog post using Fargate Spot to add more resources in parallel to overcomes these specific problems.

The following shows a high-level view of all the components: 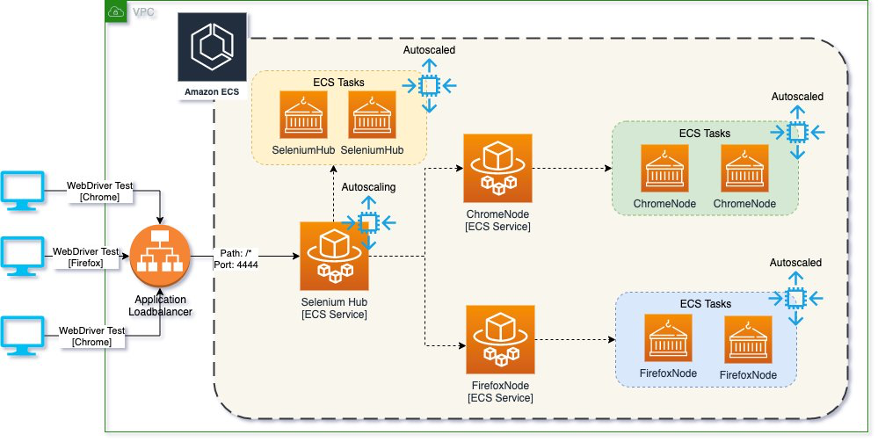 Selenium Hub is the central point in Selenium that routes the JSON test commands to Fargate and is used to parallelize and distribute the load between the browser agents for test case execution. The whole infrastructure gets deployed in an ECS cluster with the following strategy for the default capacity provider:

The Selenium Hub is backed by an application load balancer to which WebDriver clients connect to run the tests, and CloudWatch logs enable observability for any errors. The code in this repository is written as an AWS Cloud Development Kit (AWS CDK) construct.

Note: Constructs are the basic building blocks of AWS CDK apps. A construct represents a “cloud component” and encapsulates everything AWS CloudFormation needs to create the component.

Benefits of using Selenium on Fargate

Key benefits of this approach are:

Here is the sequence of events that happens when we execute a test case using this architecture: 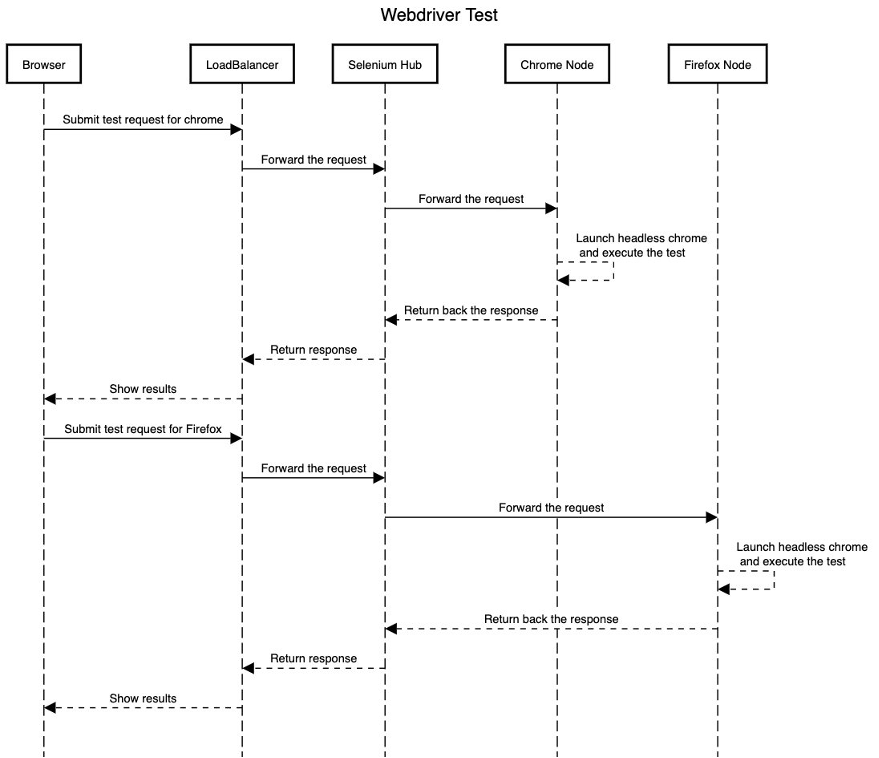 In this setup, the WebDriver client can talk to Selenium Hub with test cases results via the application load balancer URL. Once the request is received, Selenium Hub will direct the request to the Firefox Node or Chrome Node running as an ECS Fargate task to process the request. The browser node will then launch the browser in headless mode and execute the tests.

The following prerequisites will be needed:

Check out the code from this repository using this command:

Because the code is created as an AWS CDK construct, the following parameters can be customized as part of the deployment: 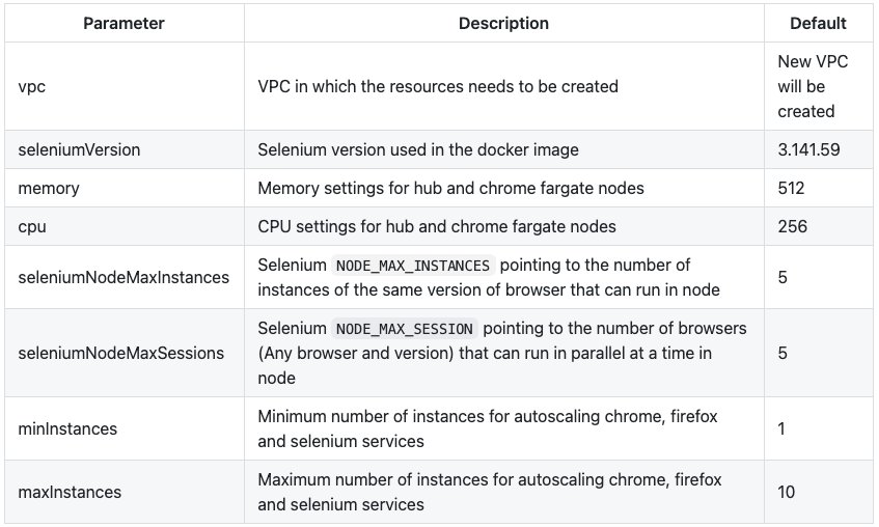 Next, run the following command to start the deployment:

Note: Once the deployment is successful, you should see the Selenium-Hub-DNS in the CfnOutput.

The complete Selenium Hub load balancer URL will look like:

Unit test cases can be executed by running the following command from the root directory:

A sample WebDriver test case can be found under sample-test-function folder, and we can run the following commands to build and execute the tests against the Selenium Hub load balancer URL:

The test case will navigate to google.com and perform a search.

All test cases should successfully pass, and the results should look like:

To simulate load testing, we ran the above mentioned test case in parallel (closer to 10 concurrent session), which made the CPUUtilization go above 70 percent, resulting in autoscaling. 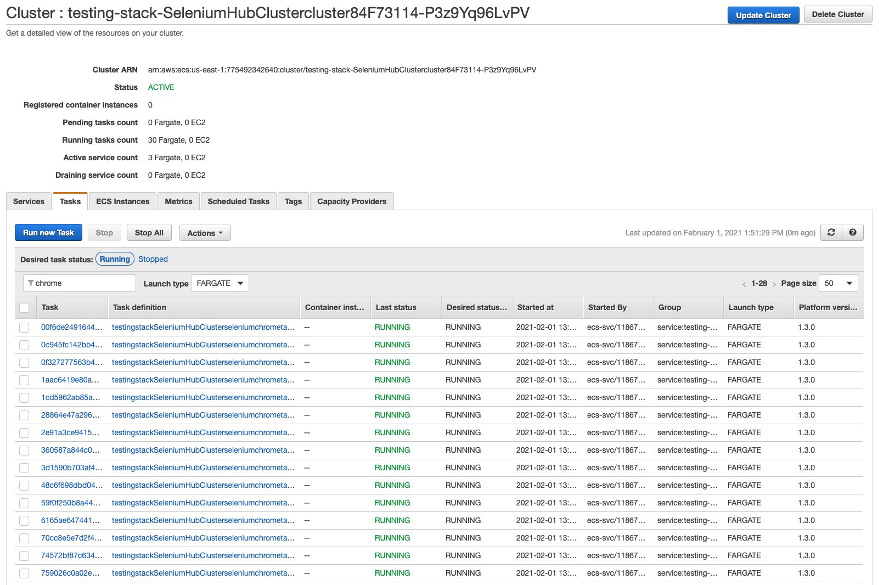 After successful test case execution, the cluster will automatically scaling down when the CPUUtilization goes below 30 percent with a cool-down interval of 180 seconds. The following shows a preview of ECS services running with just one instance after scaling down to the desired capacity: 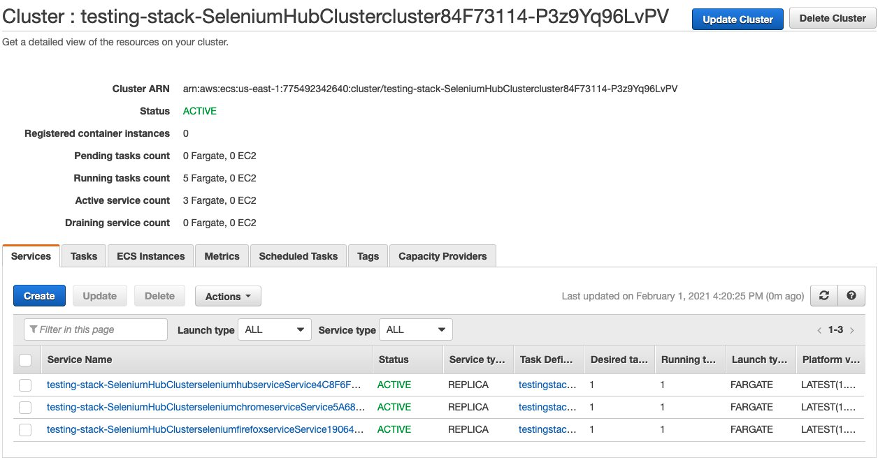 Run the following command from the root directory to delete the stack:

We have shown how a combination of AWS Fargate and Spot instances can help customers run tests in scale with low cost. This approach also allows customers to innovate quickly, fail fast, and reduce their release cycles to introduce new features into their product.