AWS Snowball Edge helps warfighters complete missions at the tactical edge, and is built to handle the toughest of environments

The AWS Snowball Edge looks unassuming. Weighing in at under 50 pounds, it can be checked as a standard piece of airplane luggage, and yet, it is an extremely durable, portable piece of hardware. The AWS Snowball Edge is capable of petabyte-scale data transport with on-board storage and dense compute capabilities. It was engineered to perform in some of the world’s most extreme environments, including warzones at the tactical edge, in a secure and transportable fashion.

Currently, it is used on US Navy ships, aircraft, by the military’s deployed units, special operations around the world, and more, as highlighted in a recent CNBC profile.

At the tactical edge: the AWS Snowball Edge in action

Warfighters collect large amounts of mission-critical data while in the field protecting the security of the nation. With the Snowball Edge, they are able to quickly and securely copy, transfer, store, and access their data at the tactical edge, despite physically extreme environments.

The Snowball Edge has been put through rigorous physical tests to prove its durability. One of the architects of Snowball Edge, Charlie Bell, Senior Vice President at AWS, previously worked on NASA’s Space Shuttle, which was engineered to withstand the rigors of takeoff and landing. This served as inspiration for part of the Snowball Edge’s rugged design.

The Snowball Edge has passed the military’s requirements for an airdrop test, which required the device to be dropped from 28 feet, 80 times, on all four corners and on all six sides. The Snowball Edge has also passed the Department of Defense’s (DoD) 901 Barge Explosive Test, during which 83 pounds of plastic explosive are detonated 20 feet from the device, multiple times.

And, the Snowball Edge is designed to work in sustained, extreme environments with temperatures ranging from 140 degrees Fahrenheit to -20 degrees Fahrenheit. This capability was critical for the Hawaii United States Geological Survey (Hawaii USGS) in 2018 when volcano lava was rapidly approaching their building. In order to save their data, Hawaii USGS shipped Snowball Edges to transfer and safely store their data while their physical location faced natural disaster.

With warfighters’ specific needs in mind, the Snowball Edge engineering team took into account a wide range of physical challenges that may arise at the tactical edge. For example, for deployed troops who are in a desert location, there is an option to attach a six micron dust filter to filter out sand and other airborne particulate to preserve the integrity of the device’s function.

Since AWS is the primary cloud provider trusted by the US intelligence agencies, and approved to run top secret workloads for the DoD, the Snowball Edge is a critical piece of tactical equipment for the military. The Snowball Edge builds upon an array of AWS services that over 5,000 government agency customers rely on every day to drive toward their mission goals. In fact, for the ninth consecutive year, Amazon Web Services has been recognized in the Leader’s Quadrant in Gartner’s Magic Quadrant for Cloud Infrastructure as a Service (IaaS), Worldwide for Ability to Execute and furthest for Completeness of Vision: 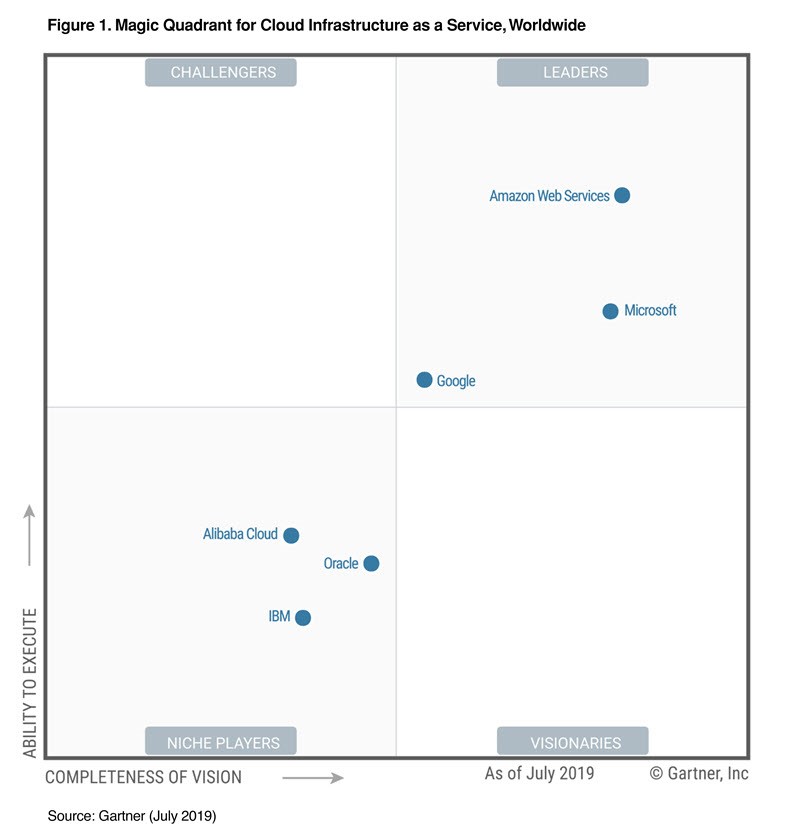 See the full report for additional details and a summary of the features and factors that our customers examine when choosing a cloud provider.

To read more about how the Snowball Edge helps warfighters at the tactical edge, read our previous blog post, “From Deserts to the Battlefield: AWS SnowBall Edge Brings Technology to the Tactical Edge.”

Gartner does not endorse any vendor, product or service depicted in its research publications, and does not advise technology users to select only those vendors with the highest ratings or other designation. Gartner research publications consist of the opinions of Gartner’s research organization and should not be construed as statements of fact. Gartner disclaims all warranties, expressed or implied, with respect to this research, including any warranties of merchantability or fitness for a particular purpose.

This graphic was published by Gartner, Inc. as part of a larger research document and should be evaluated in the context of the entire document. The Gartner document is available upon request here.