This blog references AWS RoboMaker Integrated Development Environment (IDE), a feature that has been deprecated. To follow along with this blog post, use the AWS Cloud9 IDE. See our updated blog on how to Build and simulate robotics applications in AWS Cloud9.

The AWS RoboMaker IDE is based on the AWS Cloud9 IDE for writing, running, and debugging code, and is preconfigured with ROS and Gazebo for robot model simulation. Previously, the AWS RoboMaker IDE enabled you to edit, build, and upload your code to a simulation job. That process took several minutes each time a code change was made. The AWS RoboMaker IDE now provides a full Ubuntu desktop through the browser. This provides you the ability to run robot and simulation applications and interact with them via Gazebo, RViz, and other tools directly, as though they were running them on your own desktop. The ability to run the simulation within the browser, without requiring the bundle and upload steps, speeds up the iterative develop and test process.

In this blog, I will walk you through the changes to the AWS RoboMaker IDE, and provide an example of downloading code, building, and running a simulation while in the IDE.

To create a new development environment, in your AWS account, from the AWS RoboMaker console choose Development Environments then Create environment. 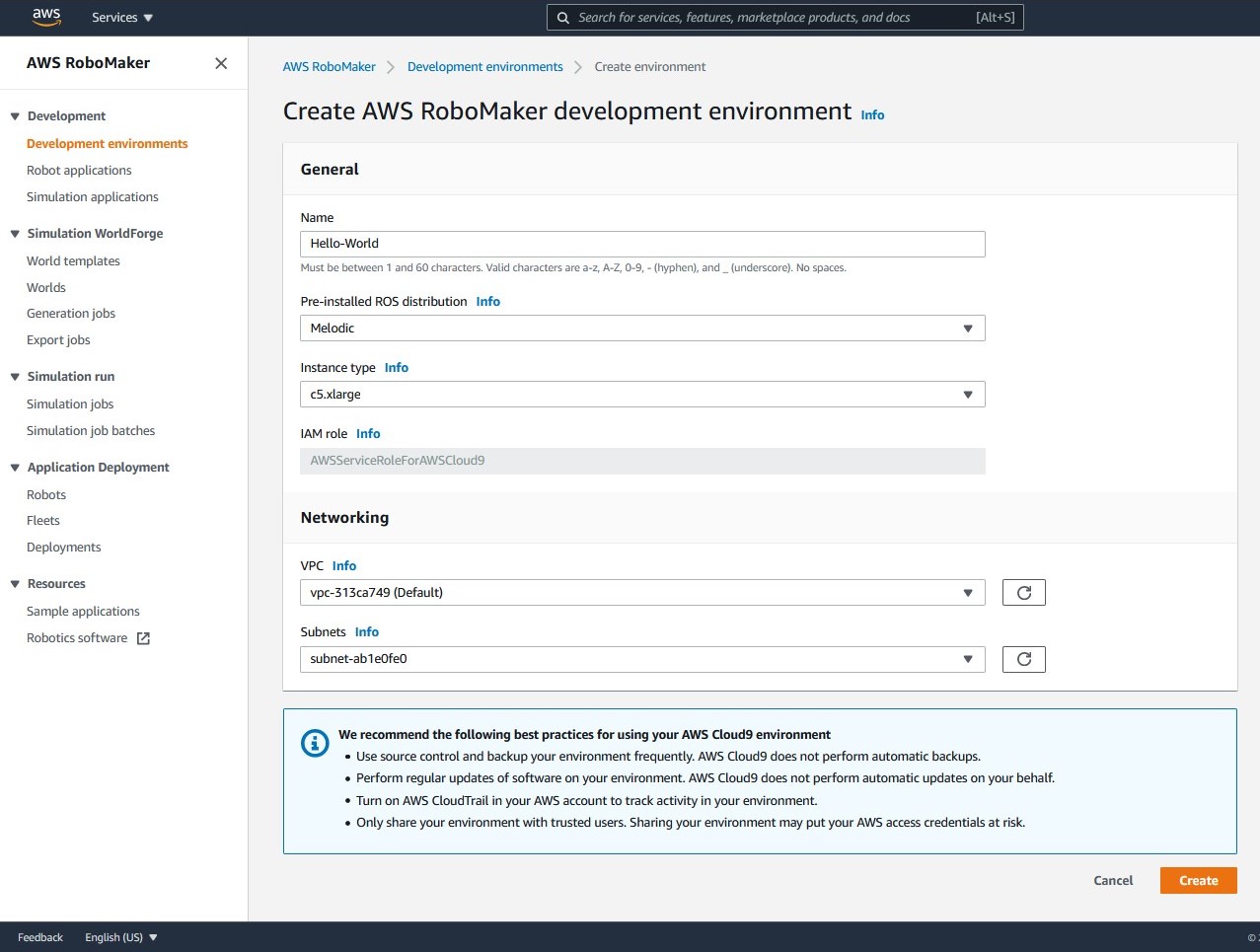 The development environment has now added a drop-down menu item for Virtual Desktop. This will open a new browser tab that has a full Ubuntu desktop.

There should be a node listed named /rotate, which is the node defined in the Python file:

The rotate node sends messages to the robot in simulation to make it rotate. You can make code changes by opening the rotate.py file in the IDE and repeating the build and launch steps preceding. The AWS RoboMaker Getting started documentation has more information for using the sample applications.

Once you have finished using the IDE, to clean up any resources used, open the AWS RoboMaker console.

In this blog, I showed the new AWS RoboMaker development environment with a full desktop experience, which is useful for iterating quickly on a simulated robot. I then reviewed a step-by-step tutorial of how to download and run a sample application, and view it in simulation in the desktop. To learn more about AWS RoboMaker, visit the AWS RoboMaker webpage or contact us.