I’ve conducted more security audits and reviews than I can comfortably count, and I’ve found that these reviews can be surprisingly open to interpretation (as much as they try not to be). Many companies use spreadsheets to explain and limit business risks, with an annual review to confirm the continued suitability of their controls. However, multiple business stakeholders often influence the master security control set, which can result in challenges like security control definitions being repeated with different wording, or being inconsistently scoped. Reviewing these spreadsheets is not especially fun for anyone.

I believe it’s possible for businesses to not only define their security controls in a less ambiguous way, but also to automate security audits, allowing for more rapid innovation. The approach I’ll demonstrate in this post isn’t a silver bullet, but it’s a method by which you can control some of that inevitable shift in threat evaluations resulting from changes in business and technical operations, such as vulnerability announcements, feature updates, or new requirements.

My solution comes in two parts and borrows some foundational methodologies from DevOps culture. If you’re not familiar with DevOps, you can read more about it here. AWS defines DevOps as “the combination of cultural philosophies, practices, and tools that increases an organization’s ability to deliver applications and services at high velocity: evolving and improving products at a faster pace than organizations using traditional software development and infrastructure management processes.” Sounds pretty good, right?

The process of developing security controls should start with a threat modeling exercise. There are some great tools out there that can help you develop very rich threat models for your solutions. I have a personal preference for using STRIDE with my customers, as it’s very widely accepted and has a low barrier to use, but you might also try PASTA, DREAD, VAST, Trike, or OCTAVE. All of these tools result in a risk register being published. A risk register is a prioritized list of risks to your business (or some component of your business or solution), their likelihood of being realized, and their impact if they were to be realized. Combining these factors results in a risk score. You’ll walk through the various mechanisms for those risks to be addressed based on their likelihood or impact. The mechanisms can be directive, preventative, detective or responsive controls; collectively, these are your security controls. (If you want to learn more about the difference between control types, check out the whitepaper AWS Cloud Adoption Framework: Security Perspective.) 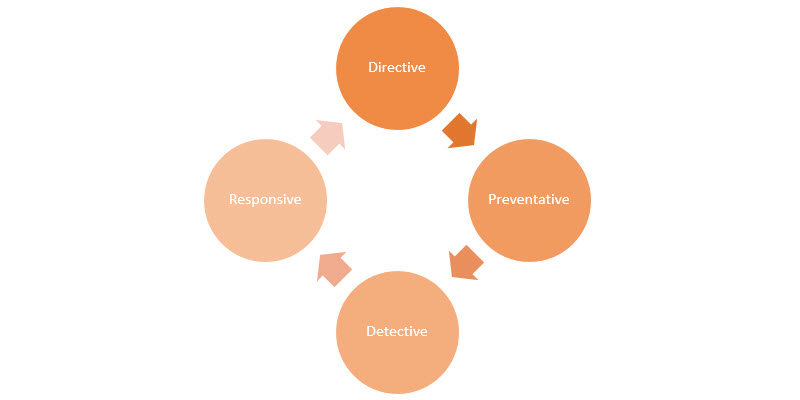 Security controls should be carefully worded to avoid ambiguity. Each control typically takes the form of a single statement that requires some action or configuration. The action or configuration results in the documented risk either being mitigated in full or else leaving some residual risk, which can be managed further with other security controls as required by your business’s risk tolerance.

However, the end result can feel like a children’s game of “Telephone” in that an implemented control doesn’t always relate closely to the originally envisioned threat. Consider the following security control definition:

On the surface, this looks like an easy preventative control to implement, but it immediately raises multiple questions, including:

This is where DevOps comes in. Many DevOps practices use the notion of a “user story” to help define the requirements for solutions. A user story is simply a syntax for defining a requirement. In other words: As a <user>, I want to <requirement>, so that <outcome>. If you use the same approach to define your security controls, you’ll notice that a lot, if not all, of the ambiguity fades:

Boom! Now the engineer trying to implement the security control has a better understanding of the intention behind the control, and thus a better idea of how to implement it, and test it.

Documenting these controls for your security stakeholders (legal, governance, CISO, and so on) in an accessible, agile project management tool rather than in a spreadsheet is also a good idea. While spreadsheets are a very common method of documentation, a project management tool makes it easier for you to update your controls, ensuring that they keep pace with your company’s innovations. There are many agile project management suites that can assist you here. I’ve used Jira by Atlassian with most of my customers, but there are a few other tools that achieve similar outcomes: Agilean, Wrike, Trello, and Asana, to name a few.

Once you’ve written your security control as a user story, you can borrow from DevOps again, and write some acceptance criteria. This is done through a process that’s very similar to creating a threat model in the first place. You’ll create a scenario and then define actions for actors plus expected outcomes. The syntax used is that we start by defining the scenario we’re testing, and then use “Given that <conditions of the test> When <test action> Then <expected outcome>.” For example:

After you write multiple action statements and scenarios supporting the user story (both positive and negative), you can write them up as a runbook, an AWS Config rule, or a combination of both as required.

The second example acceptance criteria above would need to be written as a runbook, as it’s a responsive control. You wouldn’t want to generate a stream of emails to your security operations manager to validate that it’s working.

The other two examples could be written as AWS Config rules using a call to the iam:simulate-custom-policy API, since they are related to preventative controls. An AWS Config rule allows your entire account to be continuously evaluated for compliance, essentially evaluating your control adherence on a <15min basis, rather than from a yearly audit.

Committing those runbook and AWS Config rules to a central code repository fosters the agility of the controls. In the case of runbooks, you may want to adopt a light-weight markup format, such as markdown, that you are able to check in like code. The defined controls can then sit in a CI/CD pipeline, allowing the security controls to be as agile as your pace of innovation.

There are numerous benefits to this approach:

One word of caution: You will inevitably have exceptions to your security controls. It’s tempting to hardcode these exceptions or write configuration files that allow for exclusions to rules. However, this approach can create hidden complexity in your control. If a resource is identified as being non-compliant, it may be better to allow it to remain as such, and to document it as an exception to be periodically reviewed. Remember to keep a clean separation between your risk evidence and risk management processes here. Exception lists in code are difficult to maintain and ultimately mean that your AWS Config dashboard can show a distorted evaluation of your resources’ compliance. I advise against codified exceptions in most cases. In fact, if you find yourself preparing to write out exceptions in code, consider that maybe your user-story needs re-writing. And the cycle begins again!

As cloud computing becomes the new normal, agility and innovation are crucial behaviors for long-term success. Adopting the use of user stories and acceptance criteria to mature your security governance process empowers your business to plan for acceleration. I’ve used the DevOps approach with several customers in the finance sector and have seen a shift in the perception of how security governance affects teams. DevOps has the ability to turn security teams into enablers of business innovation.

If you want help finding practical ways to build DevOps into your business, please reach out to the AWS Security, Risk and Compliance Professional Services team. For information about AWS Config pricing, check out the pricing details page. If you have feedback about this blog post, submit comments in the Comments section below.